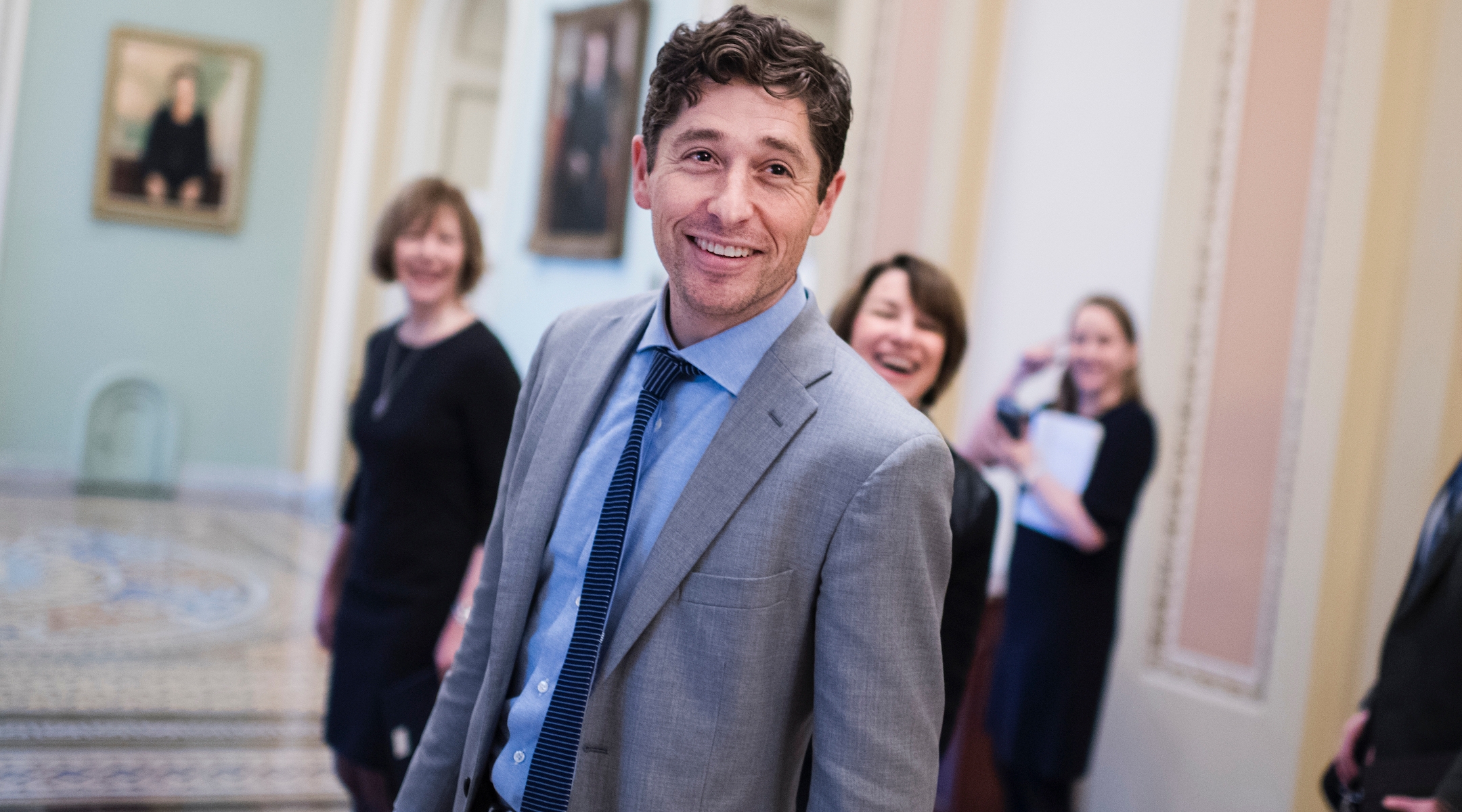 (JTA) — Earlier this month, Jacob Frey went from being the relatively unknown mayor of Minneapolis to an instant internet celebrity—thanks to some attacks by President Donald Trump on Twitter.

In a series of tweets, Trump lashed out at Frey, whom he called a “lightweight mayor,” after Frey announced that his city would not cover the costs of Trump’s security for a rally there. The Minneapolis Target Center, which was set to hold the event, threatened to cancel it if the Trump campaign didn’t pay $530,000 to cover the costs ahead of time.

Radical Left Dem Mayor of Minneapolis, Jacob Frey, is doing everything possible to stifle Free Speech despite a record sell-out crowd at the Target Center. Presidents Clinton and Obama paid almost nothing! The Minneapolis Police have been incredible….

As fans rallied behind Frey, some weren’t only paying attention to his jabs at the president. They also began to swoon over his looks, terming him “the hot mayor.”

I sort of work in news now so I just want to make sure everyone has seen the mayor of minneapolis? for news reasons pic.twitter.com/T6oPBifw8J

It was a “bizarre” turn of events, the 38-year-old Democrat told the Jewish Telegraphic Agency in a phone interview from Minneapolis on Thursday.

“You don’t wake up in the morning expecting to have the president of the United States tweeting out garbage about you and the city you represent,” he said.

Yawn… Welcome to Minneapolis where we pay our bills, we govern with integrity, and we love all of our neighbors. https://t.co/v1cXvoD9uR

Despite the controversy, the company managing the event’s venue ended up backing down from its initial demand that Trump cover the security costs beforehand. Frey told JTA that the city won’t cover the cost, and it will be up to the venue to decide how to pay for it. During the Oct. 10 rally, Trump called Frey “a rotten mayor.”

“His rhetoric is so hateful and stupid and childish, I don’t even want to dignify it with a response,” he said. “The fact that we stooped to a level where the president of the United States has time to be tweeting out this garbage—not withstanding an impeachment inquiry and a war in Syria and all the crises we have domestically—is nonsensical.”

But for his new fans, including those who praised his appearance, he has nothing but fond feelings, saying he “appreciate[s] the kind words.”

“In seriousness, traditionally Jewish males are stereotyped through Nazi propaganda to be ugly and weak,” he said. “And if nothing else, I think it’s good when media and community rejects that notion.”

Frey has a colorful resume. He went to college on a track scholarship and competed as a professional runner afterwards, including in the 2007 Pan American Games, where he finished fourth with an impressive marathon time of 2:16:44.

He describes running as his “original passion.”

“I loved and continue to love the direct correlation between hard work and success,” he said. “If I worked harder than the person standing next to me on the starting line I was probably going to win.”

The realization that many other areas of life weren’t so simple is what led him to law and later to politics.

“That correlation does not exist in life in general. It’s so dependent on who you parents were and what side of the tracks you grew up on, and that’s something that inspires me to change it,” he said.

In 2009, he graduated from Villanova University’s law school and moved to Minneapolis where he got a job at a law firm.

During his time as a lawyer, he offered legal aid to Minneapolis residents whose homes were destroyed by a tornado in 2011. He also organized the Big Gay Race, a 5k run to raise money for a Minnesota group supporting same-sex marriage.

Four years after he got his start in law, he decided to change direction and ran for a seat in the city council. After winning that, he successfully ran for mayor in 2017.

“This is my dream job,” he said. “I’m working like a dog, but I’m having a ball. To be able to work hand in hand with the community to not just talk about but fully attack some of these institutionalized problems, it’s fulfilling, it’s tough, it’s controversial.”

One of Frey’s passions is the issue of affordable housing.

“I believe everyone should have a safe place to go home to at the end of the night, to rest their head on the pillow and to rejuvenate for the next day,” he said. “And obviously that right is not afforded to everyone.”

Last year, his budget for the city included a record of $40 million funding for affordable housing. This year he is looking to add another $31 million to the budget for that purpose.

Frey grew up in Oakton, Virginia, in a Reform Jewish household, the son of parents who both worked as professional ballet dancers.

“We weren’t as much religiously Jewish,” he said. “I’m not even sure [whether] my mother believes in God or not, but she took tradition very seriously—bagels and lox on Sunday, no questions.”

Frey attends two Reform synagogues in Minneapolis—Temple Israel and Shir Tikvah—together with his wife Sarah Clarke, a community organizer and lobbyist who recently converted to Judaism.

“The moral imperative outlined by tikkun olam,” he said referring to the Hebrew phrase for the Jewish precept to heal the world, “is something I believe in strongly and is foundational both to Judaism but also my philosophy in government.”