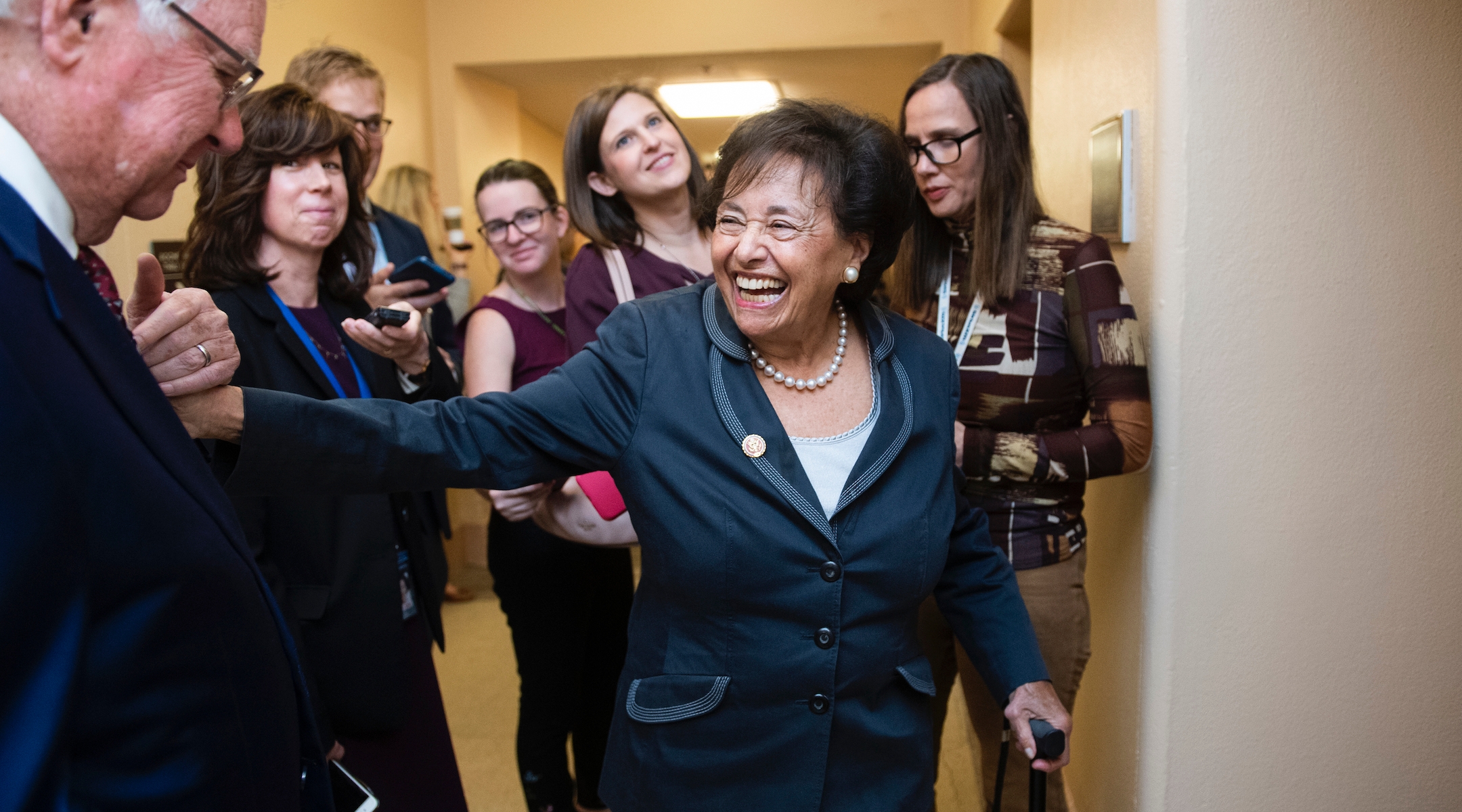 WASHINGTON (JTA) — Nita Lowey, who is retiring after 32 years in Congress, fields a question about her legacy as a Jewish lawmaker. No trouble there — she talks about Israel and her Jewish pride all the time.

Then there’s one about her legacy as one of the pioneering women in Congress. That one goes down easy, too: Her office is plastered with photos signifying how far women have come in American politics.

But when a reporter asks a question combining the two — about her legacy as a female Jewish lawmaker — the New York Democrat has to ask an assistant to find some tissues.

“Oh, I have to stop and get emotional,” she said.

Why does Lowey choke up over the question?

It goes back to her mother, Beatrice Melnikoff.

“I grew up in the Bronx, where my mother was active in all kinds of Jewish communities, the synagogue, and it was something that was handed on to me, l’dor v’dor,” Lowey told the Jewish Telegraphic Agency in a recent interview in her office on Capitol Hill, using the Hebrew expression meaning from generation to generation. “This has been an extraordinary opportunity to do good.”

At 82, Lowey is the second most powerful lawmaker in the U.S. House of Representatives, behind only the speaker, Nancy Pelosi of California. Along with Rep. Kay Granger, R-Texas, the committee’s ranking member, Lowey was one of 50 women named to InStyle magazine’s “Badass list” this summer.

She launched her congressional career in 1988, when a Jewish man — Lowey doesn’t say who — talked her into running for Congress. The field already included two men.

“You’d be the best candidate,” he told Lowey, then a longtime assistant secretary of state for New York.

The tale recalled a time when women had to be persuaded to join the political fray.

Lowey had emerged as a Jewish leader as a student at Mount Holyoke College. There were religious services for Christians, but not for the Jewish women.

Lowey says her Jewish identity as a lawmaker has been defined on the Appropriations Committee, where she became the senior Democrat in 2013 and the committee chair since the beginning of this year. Upon taking the helm, Lowey had the option of chairing a subcommittee. It was narrowed to two choices: Labor, Health and Human Services, which controls $150 billion, including spending on many of the women’s issues she favors, or Foreign Operations, which deals with just over a third of that amount. She chose the latter.

“I took that committee because I felt that it was important to make sure that the partnership between Israel and the United States remains strong,” she said.

Lowey and Granger have appeared together at annual meetings of the American Israel Public Affairs Committee to argue that bipartisan support for Israel is vital — and more broadly, that foreign aid generally is critical to American security. That position, once mainstream among Republicans, has put Granger at odds with the Trump administration.

The New York legislator spoke regretfully of the fraying relations between Democrats and the government of Israeli Prime Minister Benjamin Netanyahu, for which she blames Republicans and also — gently — Netanyahu. She recalled pleading with Netanyahu in 2015 not to accept an invitation from then-Speaker John Boehner to use Congress as a stage to slam President Barack Obama’s efforts to negotiate a deal to curb Iran’s nuclear ambitions.

“I said, ‘I’ll arrange private meetings for you in the House and Senate. This was not a bipartisan invitation, and I believe passionately for Israel and the U.S. to maintain a bipartisan alliance. Don’t come within a framework that has been partisan,'” Lowey recalled. “He said, ‘I’ll think about it.’ He never got back to me.”

She considered Netanyahu a friend, Lowey said, and it was clear his snub still stung. Since then, Lowey has pivoted from being the kind of stalwart pro-Israel lawmaker who would never utter a word of criticism of its government to one who more proactively promotes policies that Israel rejects.

Netanyahu, following the lead of President Donald Trump, has retreated from the two-state solution. Lowey robustly promotes it.

Lowey pressed AIPAC hard to join J Street, the liberal Jewish Middle East policy group, and the Alliance for Middle East Peace in backing a bill that would budget $50 million to support grassroots peace programs for which the Trump administration has eliminated funding. The Netanyahu government and its allies have derided some of the NGOs that would receive the funds as inimical to Israel’s interests.

Disagreeing with Israeli government policies is not such a big deal, Lowey said.

“If there have been disagreements with Israel, we can talk about it openly and honestly,” she said.

Still, Lowey beams with pride in recalling the wonder that members of the Congressional Black Caucus expressed when they learned during a trip to Israel that Lowey led in the 1990s about Israeli efforts to assist developing African countries. The country’s medical and science innovations, she said, “make me so proud to be a Jew, as a Jewish member of Congress having the opportunity to work for peace, work for good relationships between Arabs and Jews. It’s been a privilege.”

Lowey won’t speak on the record about her relationship with the four freshman congresswoman known as “The Squad,” who have been harshly critical of Israel, to varying degrees. But a clue may be found in her rebuke earlier this year when one of them, Ilhan Omar of Minnesota, suggested that supporters of Israel are loyal to a foreign country. Lowey condemned Omar’s statements — but also left her door open to talk it through.

“Anti-Semitic tropes that accuse Jews of dual loyalty are equally painful and must also be roundly condemned,” Lowey tweeted. “I am saddened that Rep. Omar continues to mischaracterize support for Israel. I urge her to retract this statement and engage in further dialogue with the Jewish community on why these comments are so hurtful.”

Lowey does not support proposals, which have gained ground recently in the Democratic presidential race, to leverage aid to Israel as a means to bring its policies in line with American priorities. Lowey has also said that she is “concerned” about how young people relate to Israel, but was reassured when she recently visited the University of Michigan Hillel, where she has a grandson. Hundreds attend Hillel events at the school and Hillel members are engaged in defending Israel on campus.

Lowey says she is leaving Congress because she wants more time with her husband of 58 years, Stephen, her three children and her eight grandchildren. In 2011, Lowey told JTA that one of her greatest pleasures was preparing Jewish holiday meals. Now? Not so much.

“I’ll give away a secret — I had 34 for break-fast [after Yom Kippur], but I didn’t cook anything,” she said. “I dialed the telephone.”