Are Jared and Ivanka taking the gloves off? 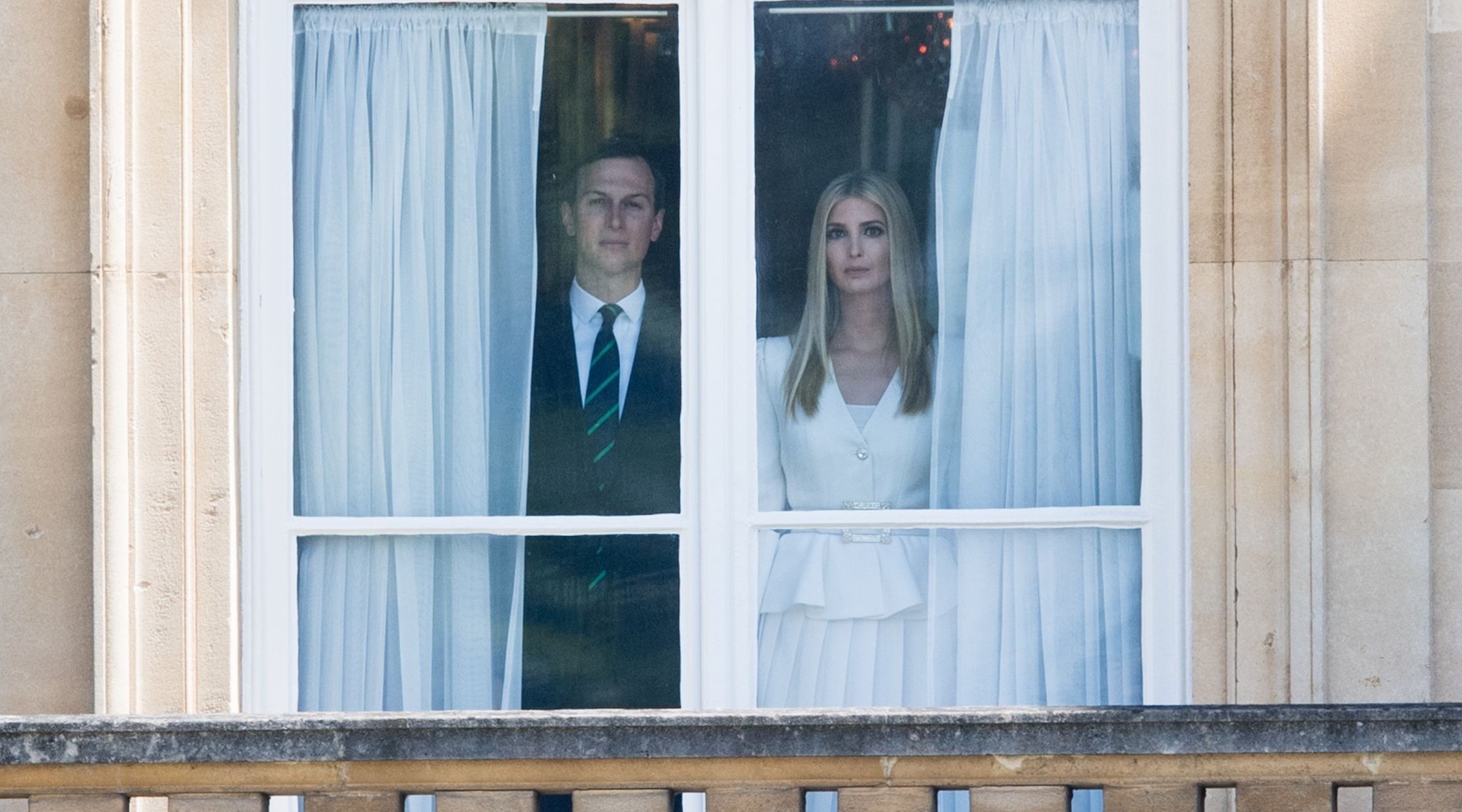 WASHINGTON (JTA) — Ivanka Trump and Jared Kushner, the New York socialites who were supposed to soften the blunt edges of the Trump administration, appear to be taking the gloves off.

After nearly two years of relative silence on the swirling controversies in the White House, President Donald Trump’s daughter and son-in-law, both of whom hold senior advisory positions in the West Wing, seem to be bracing for a fight.

Last month, in a rare media interview, Kushner took an even rarer swipe at one of the president’s opponents, saying he had been busy “cleaning up the messes” Vice President Joe Biden left behind in the Middle East. And Ivanka — whose Twitter feed is best described as part travelogue, part booster of good economic data — recently featured a tweet describing her father as surrounded by “enemies and spies.”

Kushner was responding to a comment Biden had made questioning Kushner’s suitability to negotiate peace in the Middle East. “What credentials does he bring to that?” Biden asked. Kushner shot back, saying Biden was responsible for a punitive law that had crippled the criminal justice system, chaos in the Middle East and trade deals that had shortchanged the United States.

“A lot of the work that the president’s had me doing over the last three years has actually been cleaning up the messes that Vice President Biden left behind,” Kushner said.

Meanwhile, Ivanka Trump has taken a rare swipe of her own. Last week, on the day the U.S. House of Representatives endorsed an impeachment inquiry of the president, Trump quoted Thomas Jefferson:

“…surrounded by enemies and spies catching and perverting every word that falls from my lips or flows from my pen, and inventing where facts fail them.” -Thomas Jefferson’s reflections on Washington, D.C. in a letter to his daughter Martha.
Some things never change, dad!

“‘Surrounded by enemies and spies catching and perverting every word that falls from my lips or flows from my pen, and inventing where facts fail them.’ -Thomas Jefferson’s reflections on Washington, D.C. in a letter to his daughter Martha. Some things never change, dad!”

A source close to the Kushners told the Jewish Telegraphic Agency that the couple does not seek out confrontation, noting that Kushner’s remark was in response to a question. But the tough tone the couple occasionally takes in public simply reflects the central role they play behind the scenes, watching President Trump’s back, the source said.

The buzz after Donald Trump’s 2016 election was that the couple, both former Democrats who traveled easily in New York City’s liberal circles, would put the brakes on the president’s hardline tendencies. It took about a year for folks to realize that was wishful thinking; Kushner and Ivanka Trump deferred to the president, not the other way around.

Still, the couple (or people close to them) continued to leak their disapproval of Trump’s rollback of immigrant and LGBTQ rights to the media and attempted to maintain credibility with Americans on both sides of the political divide.

One theory is: nothing.

Kushner rarely speaks to the press, a silence that has reinforced the notion that he is the president’s foil. But there has always been evidence that, like his father-in-law, he plays hardball.

Kusher has sought retribution against the people who put his father in prison for fraud. He once expressed admiration for a New Jersey official who shut down the George Washington Bridge as political retribution, saying the move was “kind of badass.” And he said Palestinians deserved the massive cuts in aid that Trump initiated because they criticized his decision to move the U.S. embassy to Jerusalem.

Ivanka Trump cultivates an image as a tireless promoter of women, but she chided Cosmopolitan magazine in 2016 for asking her tough questions about her father’s policies related to child care and maternity leave.

The couple appear to be taking the recent criticism personally, and not without reason. The French government this summer released video of a coterie of world leaders side-eyeing Ivanka when she tried to contribute to their conversation. Biden was attacking Kushner not merely for his Middle East policies, but for being a failed dilettante.

What’s notable about the most recent reactions is what they reveal about how the couple perceive themselves. The Trump campaign’s initial response to the Biden jibe was to note that Kushner is the grandchild of Holocaust survivors. In other words, helping Israel is a personal mission for Kushner.

And that Jefferson quote Ivanka Trump tweeted? It was in reply to a letter from Jefferson’s daughter rebuking the third president for his long absences.

With televised impeachment hearings looming, and as the Democratic primary field narrows and candidates begin training their aim more squarely at Trump, things are likely to only heat up further. Already, some in the Washington, D.C., Jewish community say Kushner and Ivanka are ducking public engagement.

“It’s like Trump getting booed at the World Series,” said one insider, a Democrat. “This is what happens when you interact with the actual public instead of carefully curated Trump rallies and guests at the Trump hotel.”

But the source close to the couple said that’s not the case. Because of the crushing schedule they keep they can no longer make every Jewish event. The source also noted that the couple was behind setting up the first Sukkah on White House grounds during the recent holiday.