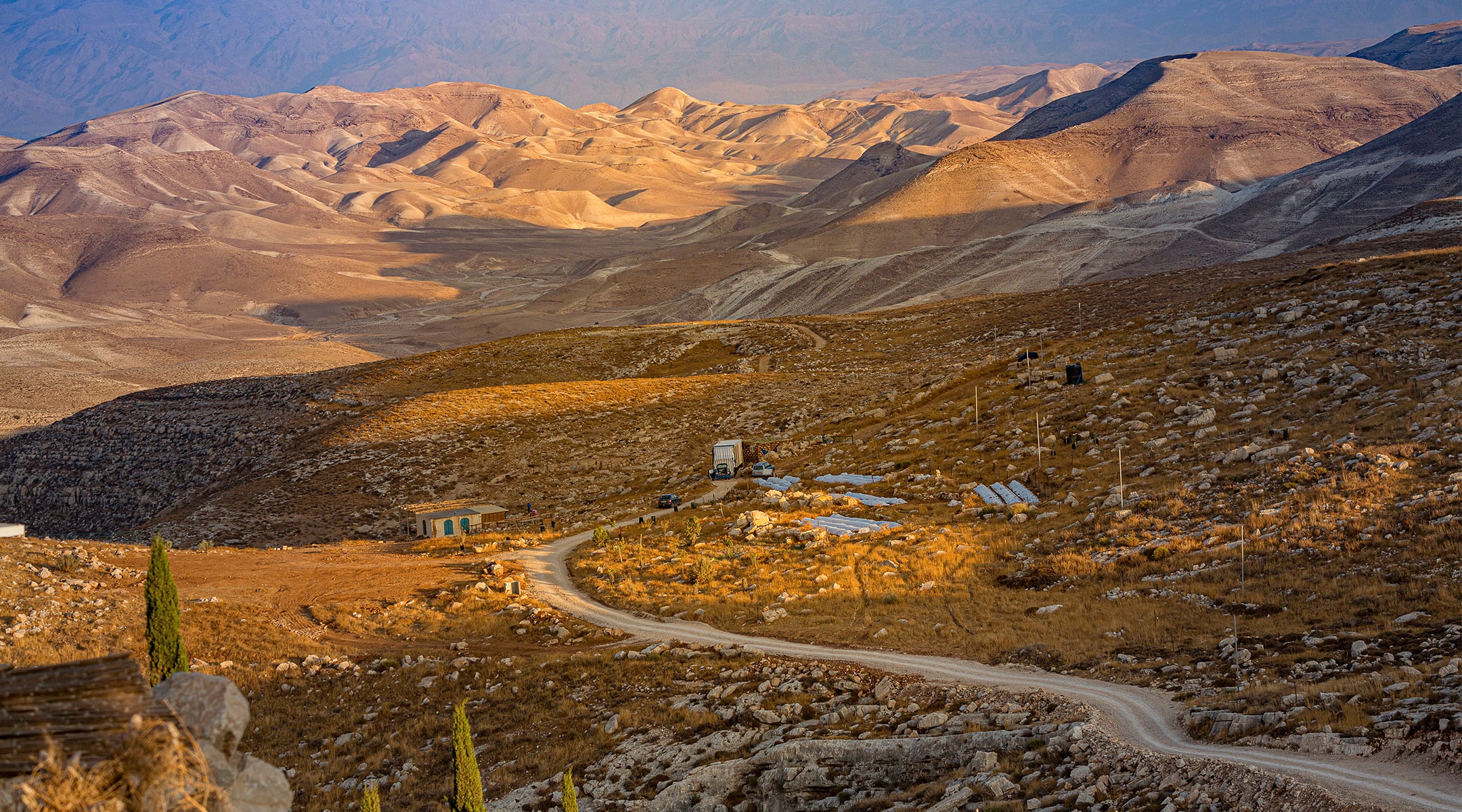 Tekoa, an Israeli settlement of nearly 4,000 people in the West Bank's Gush Etzion bloc, is shown in 2019. (Laura Ben-David)
Advertisement

(JTA) — Secretary of State Mike Pompeo announced this week that the United States will no longer consider Israeli Jewish settlements in the West Bank to be illegal.

Here’s an explainer about what the settlements are, how they are viewed in Israel and around the world, and what this announcement might mean.

What are the settlements? How many Israelis live there?

In the 1967 Six-Day War, Israel captured large swaths of territory from neighboring countries. Israel took the Sinai Peninsula and the Gaza Strip from Egypt, the West Bank and eastern Jerusalem from Jordan, and the Golan Heights from Syria.

Israel later withdrew from the Sinai and Gaza, and annexed eastern Jerusalem and the Golan. It still controls the West Bank, a territory between Israel and Jordan, but has not annexed it. This means that the West Bank is not legally considered a full part of the country under Israeli law, though many Israelis believe it to be so.

Israelis began establishing civilian settlements in these areas soon after the war, mostly in the West Bank and eastern Jerusalem. Eastern Jerusalem contains the Old City, which is home to the city’s holiest sites for Jews, Christians and Muslims, including the Western Wall and the Al-Aqsa mosque. Approximately 200,000 Israelis and 370,000 Arabs now live in eastern Jerusalem.

Some 405,000 Jewish Israelis live in the West Bank, which Israel’s government refers to as Judea and Samaria, alongside 1.9 million Palestinians, who are not citizens of Israel.

There are approximately 130 West Bank settlements, ranging from small villages of 100 people near Arab towns, to the college town of Ariel with a population of 19,000, to the haredi Orthodox enclave of Modiin Illit, located just across the boundary from Israel proper, which has 70,000 inhabitants.

On the Golan Heights, where Israel borders Syria, approximately 22,000 Israelis live alongside 26,000 Druze. Israel annexed the territory and thus does not consider these residents to be settlers, though much of the international community rejects the claim. In March, President Donald Trump recognized Israeli sovereignty over the Golan, the first country to officially do so.

Israelis had also previously settled in the Gaza Strip and Sinai Peninsula, but settlements there were evacuated when Israel withdrew from those territories. 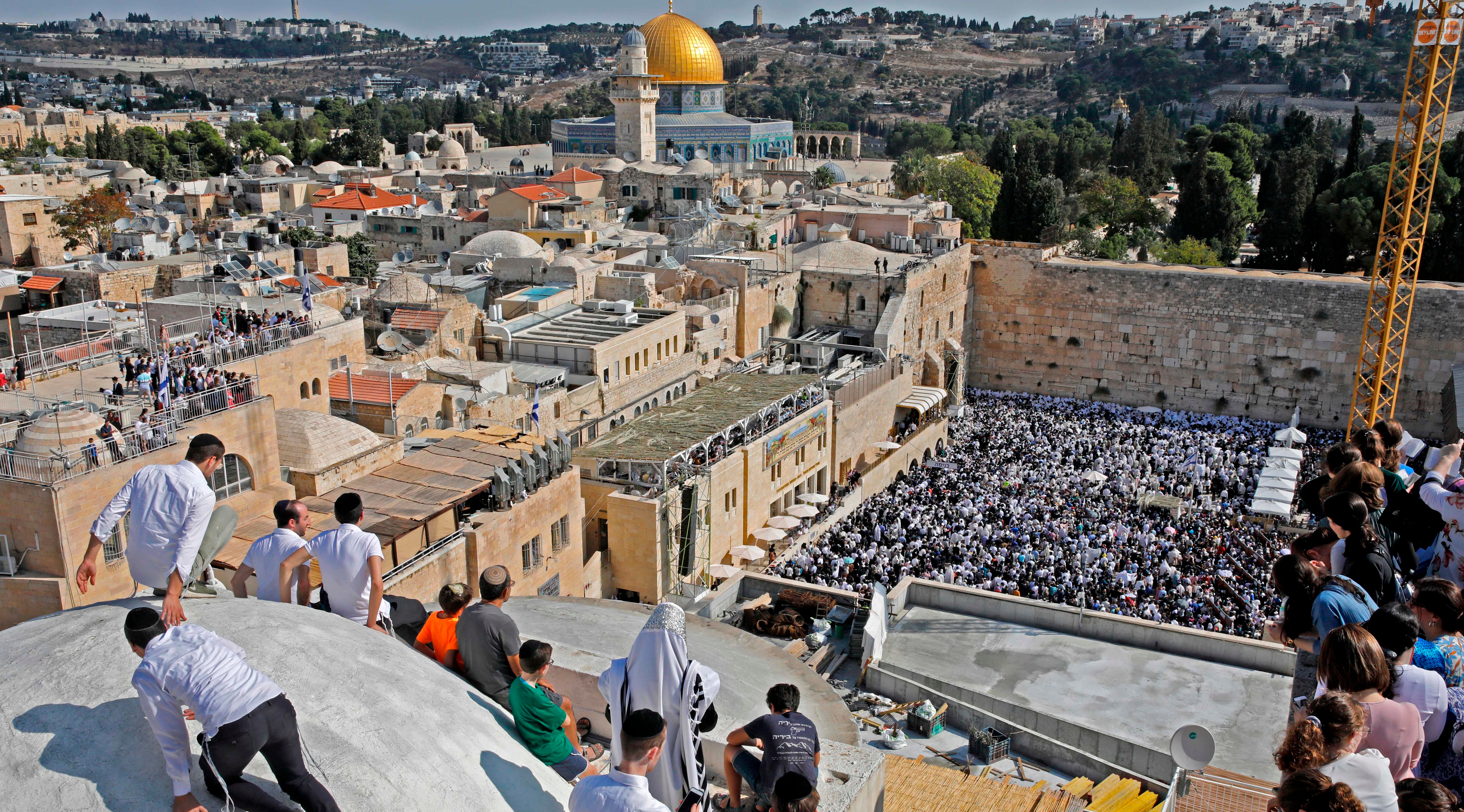 Onlookers view worshippers performing the annual Birkat Kohanim, or priestly blessing, during the Sukkot holiday at the Western Wall in the Old City of Jerusalem, Oct. 16, 2019. (Menahem Kahana/AFP via Getty Images)

What does international law say about settlements?

Eastern Jerusalem, the West Bank and the Golan Heights are all widely considered to be illegally occupied under international law.

In 2004, the International Court of Justice issued an advisory position that Israeli settlements were established in breach of international law. Israeli settlements are also widely considered to be a violation of the Fourth Geneva Convention, which prohibits an occupier from “transfer[ring] parts of its own civilian population into the territory it occupies.” Both Israel and the United States ratified this convention.

Israel’s Foreign Ministry contends that settlements do not violate international law because they sit “on legitimately acquired land which did not belong to a previous lawful sovereign” and are in many cases modern incarnations of historical Jewish villages.

What does Israeli law say about the settlements? 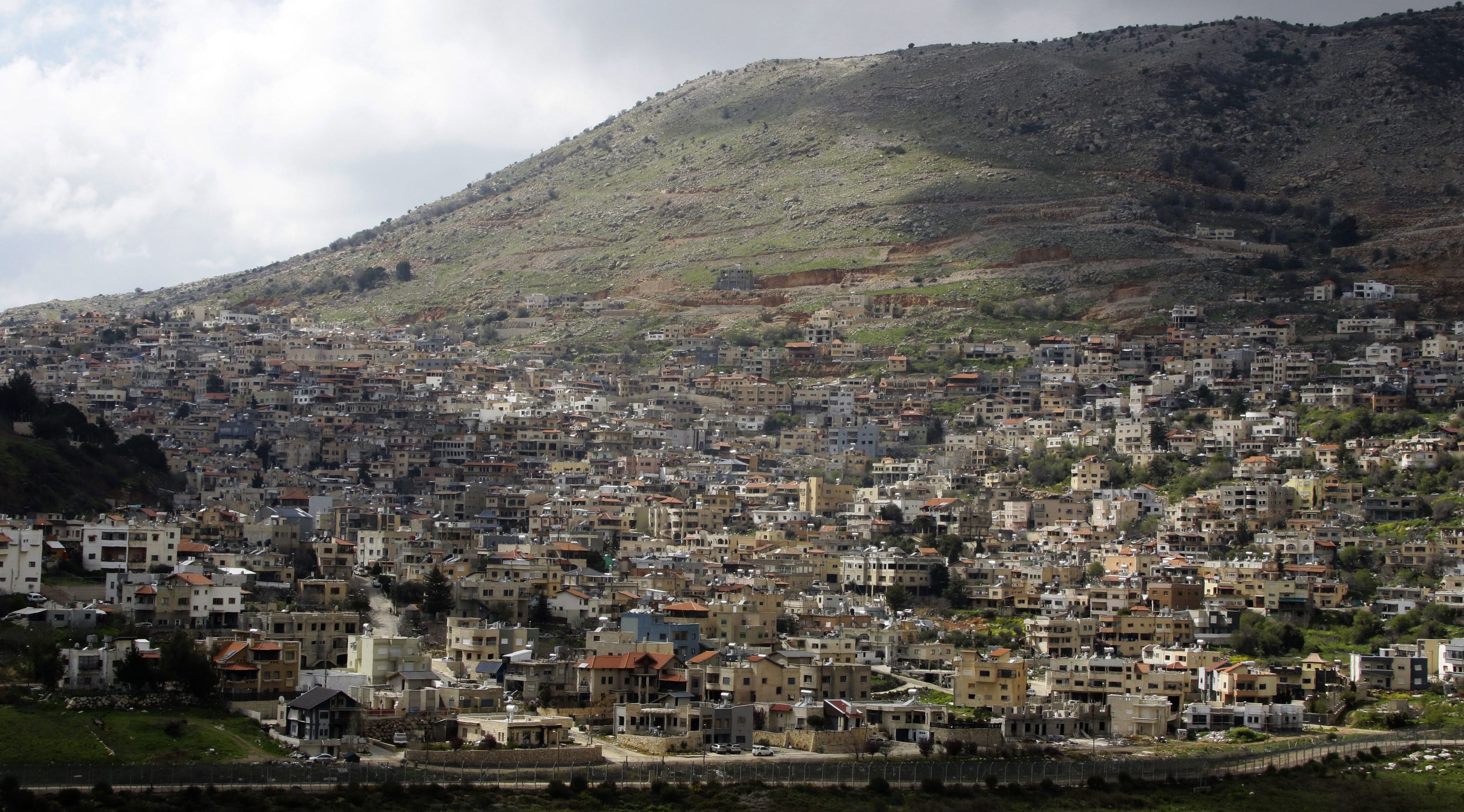 It’s complicated. Legally, Israeli settlements are treated differently than cities and towns in Israel proper. Israel’s government — in particular, a section of the Defense Ministry called the Civil Administration — must approve additional construction in the settlements before new homes can be built.

But in practice, settlements look and operate much like any other small town in Israel — down to identical street signs and public transit. For example, Ariel in the northern West Bank is connected to Tel Aviv by a major highway and boasts Ariel University.

Settlements that are not authorized by the Defense Ministry are known as “outposts” and generally are smaller and located farther from the border between the West Bank and Israel. Many have been built on private Palestinian land, and the Israeli Supreme Court has occasionally issued rulings requiring that they be demolished. A 2017 law aimed to retroactively legalize some of these settlements, though its implementation was blocked in court.

Pompeo said in his announcement that the U.S. recognition would not extend to settlements that Israel’s courts deem illegal. He also said the new position does not prejudge the status of the West Bank in any final peace agreement that Israelis and Palestinians might someday reach. Speaking of which …

What is the significance of the settlements for the peace process? But in the past, peace talks have largely been predicated on the understanding that a Palestinian state would eventually be established in the West Bank. Because there are settlements in that territory, many peace proposals have called for the large settlement blocs on the Israeli border to become part of Israel and for the rest to be evacuated.

Palestinians, in addition to viewing the settlements as a violation of international law, see them as both physical and ideological obstacles to peace. Besides taking up the territory of a would-be Palestinian state, Palestinians see settlement expansion as a signal that Israelis are not sincere about withdrawing from the territory. Palestinians have also protested violence on the part of settlers.

Israeli opinion on the settlements is split. According to a 2018 poll from the Israel Democracy Institute, 47 percent of Jewish Israelis support a two-state solution, which would presumably require the dismantling of at least some settlements. And a poll this year from the American Jewish Committee found that half of Jewish Israelis believe no settlements at all should be dismantled as part of a peace agreement.

Settlers consider the West Bank the geographical center of the historical Land of Israel, and many religious Jews value it as the place where many of the Bible’s events are thought to have occurred. Some Israelis also believe that control of the territory enhances Israel’s security.

Other Israelis believe Israel’s presence in the West Bank is unjust, or that controlling a large population of the Palestinians harms the country’s security, moral standing or Jewish demographic majority. Arab Israelis largely oppose the settlements and favor the establishment of a Palestinian state.

How have Israeli and Palestinian leaders reacted to Pompeo’s announcement? 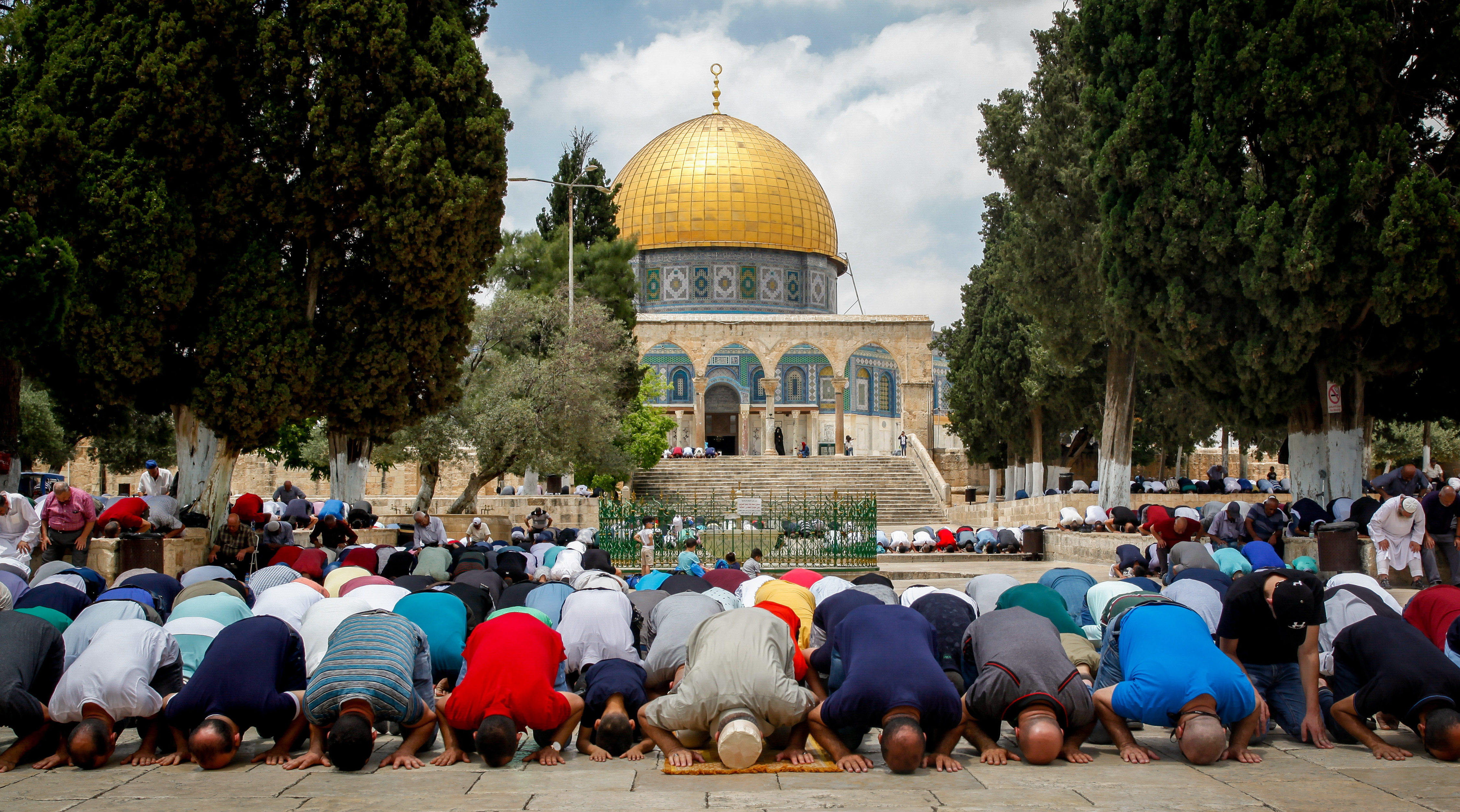 Palestinians worship during Friday prayers at the Al-Aqsa mosque compound in the Old City of Jerusalem, June 21, 2019. (Sliman Khader/Flash90)

Israeli Prime Minister Benjamin Netanyahu applauded the move — as did Benny Gantz, his political rival who is in the final hours of trying to cobble together a governing coalition in the Knesset.

The announcement could help Netanyahu, who vowed this year to annex parts of the West Bank should he remain in office. Gantz has been more vague about his position on the West Bank.

Arab-Israeli leader Ayman Odeh criticized the announcement, saying, that “no foreign minister will change the fact that the settlements were built on occupied land on which a sovereign Palestinian state will be established by Israel’s side.”

Saeb Erekat, a longtime Palestinian diplomat and negotiator with Israel, said in a statement that “with this announcement, the Trump administration is demonstrating the extent to which it’s threatening the international system with its unceasing attempts to replace international law with the ‘law of the jungle.'”

And though the announcement came from the Trump administration, so did a note of caution about the policy change. The U.S. Embassy in Jerusalem issued a travel warning for Americans, saying they could be targeted by “individuals and groups opposed to the Secretary of State’s recent announcement.” U.S. government employees are prohibited from visiting the West Bank and the Old City of Jerusalem.

Marcy Oster contributed to this report.