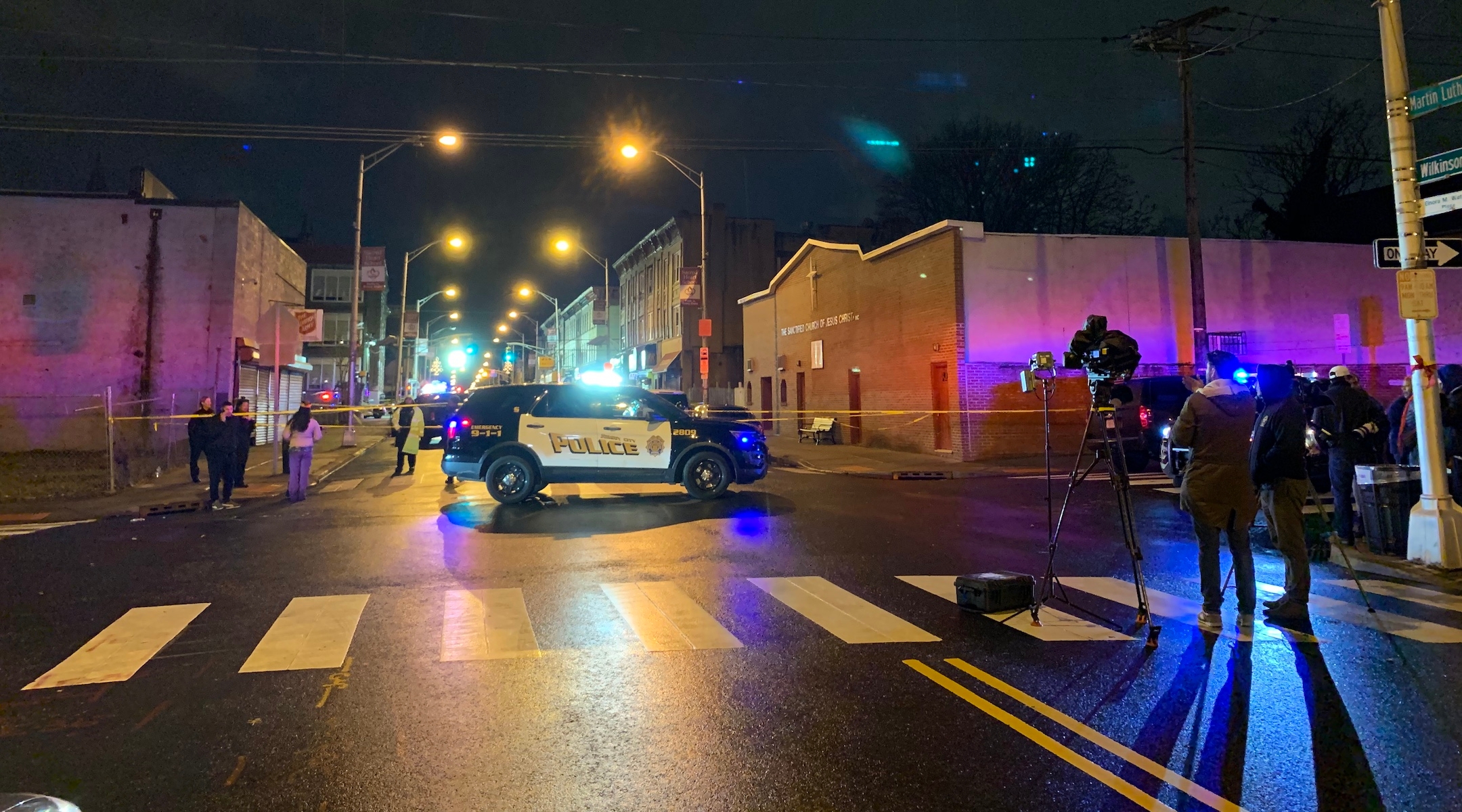 The scene near the site of a shootout between two gunmen and police at a kosher supermarket in Jersey City, N.J., Dec. 10, 2019. (Josefin Dolsten/JTA)
Advertisement

JERSEY CITY, N.J. (JTA) — Hours after gunfire that started in a cemetery and ended in a shootout at a kosher supermarket here left six dead on Tuesday, there were more questions than answers.

As of Tuesday night, the crime scene was cordoned off, keeping onlookers far from the scene. Some two dozen area residents, several reporters and many more police vehicles lingered outside the JC Kosher Supermarket on Martin Luther King Drive, on the western side of Jersey City. Some of the residents took video or livestreamed the scene on Facebook.

Initial reports indicated that investigators believed that two young gunmen — one possible third accomplice escaped the violence — found their way into the supermarket randomly, not as part of a hate crime or terrorism. By Tuesday night, however, the city’s mayor was saying the kosher store had been targeted. The assailants shot and killed a police officer in a nearby cemetery before holing up in the market in the Greenville neighborhood and exchanging fire with several more officers. The gunmen were killed in the lengthy shootout.

It was an ordeal that disturbed the heart of a small Orthodox Jewish community of nearly 100 families, most of whom moved from the Williamsburg section of Brooklyn over the past few years.

According to locals, the JC supermarket is the only kosher one of its kind in the area. It serves basic groceries, sandwiches and salads. Next door is Khal Adas Greenville, a building with a synagogue on a lower level and a yeshiva for children on the upper level.

“It’s a beautiful tight-knit community, very kind people, and it’s devastating that something like this happened,” said Rabbi Shmully Levitin, a Chabad rabbi who lives in this city across the Hudson River from New York.

Officials have not released any specific information about the suspects or the civilian victims, but Levitin says he spoke with someone who was wounded in the shooting but escaped through the back of the store. The witness told Levitin that he saw the cashier — the wife of the store’s owner — fall down injured. He saw another customer also sustain serious injuries.

Chesky Deutsch has two children who attend the yeshiva next door.

“For the first few minutes, we didn’t know information about the school. Worried is an understatement,” he said about the moment he heard about the shooting. “My initial thought was, right away, is the community as a whole under some sort of attack? That was my initial fear.”

But Deutsch, who moved from Williamsburg because Jersey City was cheaper, says there is no tension between the relative newcomers in the Jewish community and its neighbors that would lead to suspicion. Greenville has a large African-American population.

“We get along very well with our neighbors,” he said. “Thank God there was no incident whatsoever in the past.”