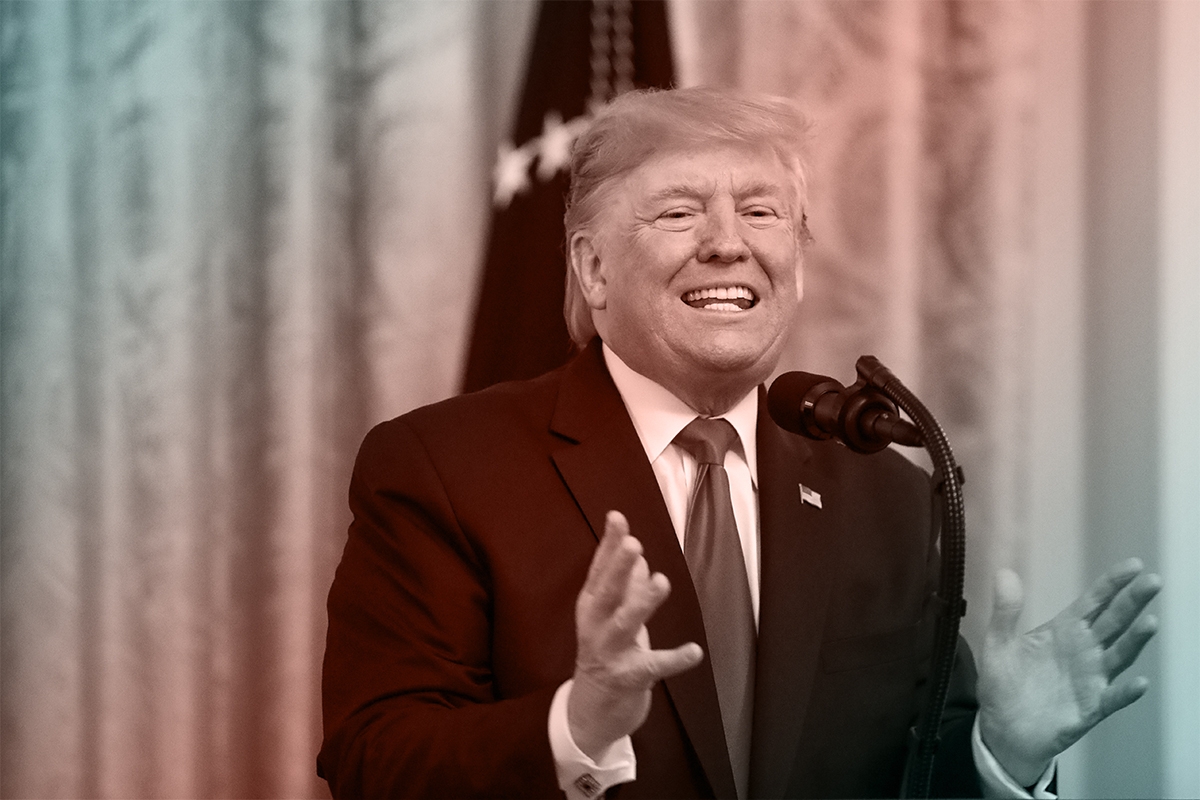 A version of this story originally appeared on Alma.

Tuesday night, The New York Times reported that President Trump was set to sign an executive order targeting “anti-Semitism and Israel boycotts on college campuses.” The article stated, “The order will effectively interpret Judaism as a race or nationality, not just a religion, to prompt a federal law penalizing colleges and universities deemed to be shirking their responsibility to foster an open climate for minority students.”

Now that we’ve actually been able to read this executive order, it seems like the NYT got this wrong. But before we get into all that, let’s break down the basics.

What does this executive order intend to do?

The proposed executive order is meant to make the Civil Rights Act of 1964 apply to Jewish college students. Why? Under Title VI of that act, the Department of Education can withhold public funding from a school or university that discriminates “on the ground of race, color, or national origin.” Not included: religion.

Okay, so why do this?

The Trump administration will now be able to say that boycotting Israel on college campuses is harming Jews, and then they will likely try to withhold funding from schools that promote the Boycott, Divestment and Sanctions (BDS) movement against Israel.

Trump is using the definition of anti-Semitism cited in 2016 by the International Holocaust Remembrance Alliance, which defines certain types of anti-Israel activity as anti-Semitic, but also says not all Israel criticism should be classified as anti-Semitism.

What does the Executive Order actually say?

Wednesday morning, Jewish Insider obtained a draft of the order that Trump will sign. Nowhere in the order does it explicitly define Jews as a nationality, but calls for the enforcement of “Title VI against prohibited forms of discrimination rooted in anti-Semitism as vigorously as against all other forms of discrimination prohibited by Title VI.” So, one could read the text to imply that Jews can be perceived as a race or having a common national origin, in order to receive protection under Title VI.

Jared Kushner took to the New York Times to reject claims that his father-in-law’s executive order defined Jews as a nationality. In an opinion piece, he wrote: “It merely says that to the extent that Jews are discriminated against for ethnic, racial or national characteristics, they are entitled to protection by the anti-discrimination law.”

The executive order on anti-semitism does not look like what the Times reported it was. https://t.co/Nzvefwt22O

Are Jews a nationality?

This is complex: The idea of “nationality” as we understand it in 2019 is a modern concept — it relates back to the rise of the “nation-state,” which we can trace back to the Treaty of Westphalia in 1648. Essentially, definitions of modern nation-states are not easily agreed upon: Some define them as states where the people in the state shares the same culture, or where people are united by language or common descent. Long story short, this led to a rise of nationalities.

Jews, as we know, have a history that extends way back before the rise of “nation-states,” which made Jews a problem in the “Westphalian system.”

The modern framework of the dreadful "Jewish Question" is the administrative bind from hell. Are Jews a religious group or are Jews a "nation" – an ethnic group – without a land?

We can conceive of the Jewish people as a “nation,” but that doesn’t necessarily mean they share a nationality. A nationality is has been defined as the legal relationship between an individual and a state.

Feel like mentioning that the Jewish definition of “nation” is not remotely the modern nation-state definition of nation, nor does defining yourself as a people with national consciousness mean anyone wants to be defined as legally distinct from your home country

As Ben Faulding (@TheHipsterRebbe) points out on Twitter: The biblical idea of a nation is not equivalent to the modern idea of nationality.

Most Jews recognize Jewish identity as being elusive abstract concept that eludes definition and cannot be easily described as religion.

However, we don’t need any president, least of all Trump to define that for us & there are potentially dangerous implications.

Here’s the thing: I don’t want the most complex aspects of Jewish identity shoehorned into American law.

How did people react?

Again, even though no one had seen the actual text of the order last night, the Times article was enough to cause many people to react to it on Twitter.

Here were some common themes:

1. Judaism is not a nationality is the main argument that is circulating on Twitter. The argument is essentially: Jews are an ethno-religion, and come from a wide variety of nationalities.

My nationality is American, and this feels like it’s gonna ultimately be bad for the Jews. https://t.co/uUQyMtuYEP

This is your regular reminder that Jews are represented in almost every nationality on earth and are white, black, brown, and every color a human can be.

Proud to be an American Jew. My nationality is American. My religious and ethnic identity is that I am Jewish. #itsnotthatcomplicated

2. The order falls into promoting the idea of “dual loyalty,” an anti-Semitic trope that implies Jews will never be loyal to the country they are living in.

It is really, *really* frightening for us to be defined as a nationality. The trope of "dual loyalism" is classic antisemitism. It encourages people to view American Jews as professing greater loyalty to Israel than to the United States– thereby making us untrustworthy. https://t.co/PyuqK1lLZX

Judaism is a lot of things, but Judaism is not a nationality—declaring it as such is an attempt to both propagate Islamophobia and promote an antisemitic dual loyalty narrative that in turn further targets us for acts of violence.

— An American Jew in America who is Jewish (@jereichwrites) December 11, 2019

That was also a terrible tweet. I meant terrible for Jewish people. A very loud dog-whistle to dual loyalty trope. Anyone applauding this move is ignorant of or willfully blind to history. https://t.co/AIZneGsZAQ

Because guess who are the type of people who don’t think Judaism is a religion? People like David Duke, leader of the Ku Klux Klan:

Here is David Duke, whose arguments Trump has just affirmed by executive order claiming that Judaism is, as Duke consistently claims, a nationality. pic.twitter.com/jyLahGbM2z

3. Some brought up the fact that Trump has white nationalist supporters.

One of the reasons Jews are so touchy right now about the President referring to American Jews as a nationality is because the President is a white nationalist.

Now that Trump is declaring that Judaism is not a religion, but a nationality, how long until David Duke and Richard Spencer – who have pushed this argument for years – come out and start screaming that Jews should go back where they came from?

The @GOP has really stepped in it.

4. Many drew comparisons to the Soviet Union, where Jewishness was a nationality and a religion. This also fed into the dual loyalty trope:

Being a Jew in the Soviet Union meant having “Jewish” stamped in your passport as a nationality.

Pushing Judaism as a nationality is as antisemetic as it gets—it assumes your home is elsewhere, and you will never belong https://t.co/8TsS029tw0

In the Soviet Union, Jewishness was defined as a nationality as well as a religion. The result was that Jews, even those who renounced their religion, were considered to have dual loyalties. This assumption was frequently used to justify antisemitism. https://t.co/I8kKvZQpXu

5. And comparisons to Nazi Germany, where German Jews were no longer defined as German.

I wonder what German Jews felt like when they learned they weren’t actually considered Germans by their own government.

One of the first stages of the Holocaust was asserting that German Jews weren’t real Germans, which even applied to Jews who had thoroughly assimilated to German culture, had centuries of family history in Germany, and/or were not religious. Such an executive order would do that. https://t.co/Ncqash9Tp1

I have the documents rescinding my grandmother's German citizenship (where she was born and raised) to prove it. https://t.co/0MrDENia5K

6. Yet others pointed out that this is another way Jews are being used as pawns to stifle free speech, especially by pro-Palestinian activists.

this is obviously profoundly antisemitic with sinister precedents

but please PLEASE don't sidebar the fact that this is being done to crush Palestinian dissent https://t.co/ZjlzZcT28x

As we respond to Trump's antisemitic attempt to redefine Jews as a "nationality we have to remember this is also directed at shutting down Palestinian student activism on college campuses and protecting the Israeli government from critique. We need to resist this together.

Did anyone support it?

1. Some argued it will push forth a law to hold colleges accountable for anti-Semitism (implied as BDS), where bipartisan legislation has tried and failed.

We ⁦@OUAdvocacy⁩ welcome @POTUS Exec Order which will implement what bipartisan legislation has sought for years; enabling ⁦@usedgov⁩ to hold colleges accountable for #antisemitism on campus https://t.co/g5NytsRS2F

2. Jews are a nationality, went another argument.

Fellow Jews:
Let's set aside the first amendment concerns for a moment (though they are important considerations!).

Let's set aside how we feel about the President.

I'm a member of the Jewish nation, aren't you? https://t.co/Czg8PZWW9Q

3. Others argued it’s just meant to help fight anti-Semitism on campuses, and the only way to do it is to affirm that Judaism isn’t just a religion.

Everyone: *only reads headline*

Reality: title VI does not bar discrimination for religion, thus to stop anti-semitism on campuses judaism must be categorized as a national origin pic.twitter.com/pBOIq9ILsH

4. President Obama set the precedent, others pointed out.

Seeing much reaction to “nationality” in this tweet as synonymous with Israel, but underlying article says “race or nationality.” Title VI of Civil Rights Act applies to race/color/nat’l origin but not religion; Obama DOJ ruled Jews/Muslims/Sikhs still protected due to ancestry. pic.twitter.com/N78uhABxH4

A friendly reminder that this interpretation of Title VI was decided by the U.S. Dept of Education in 2010, when someone else was in the White House. https://t.co/uneZ4Z7QXg https://t.co/V1IeUO1ncz

If Obama already applied Title VI to Jewish students, why do we need this executive order?

To make Trump’s base happy, for one.

But yes, anti-Semitism was already covered, per the Obama administration.

The key thing here is that anti-Semitism was already covered by Title VI (thanks to earlier Obama executive order). This new executive order seems more superfluous than anything else.

So why was the reaction so intense?

Historical precedent has undeniably made people wary about classifying Jews as a nationality, and un-linking them from the current country they live in. Trump has also invoked tropes and themes in speeches that many have found anti-Semitic, making the issue extra sensitive.

Many American Jews did turn to humor, and we’d be remiss not to include the funniest tweets:

Wait if “American Jew” is a nationality does that make Ira Glass my President?

(Read the entire thread. Seriously. You won’t regret it.)

I don’t even want a fuckin nationality

The funny thing about all this jewish nationality stupidity is that my nationality is really New Yorker.

Which is how we’ll end, because they made us smile.