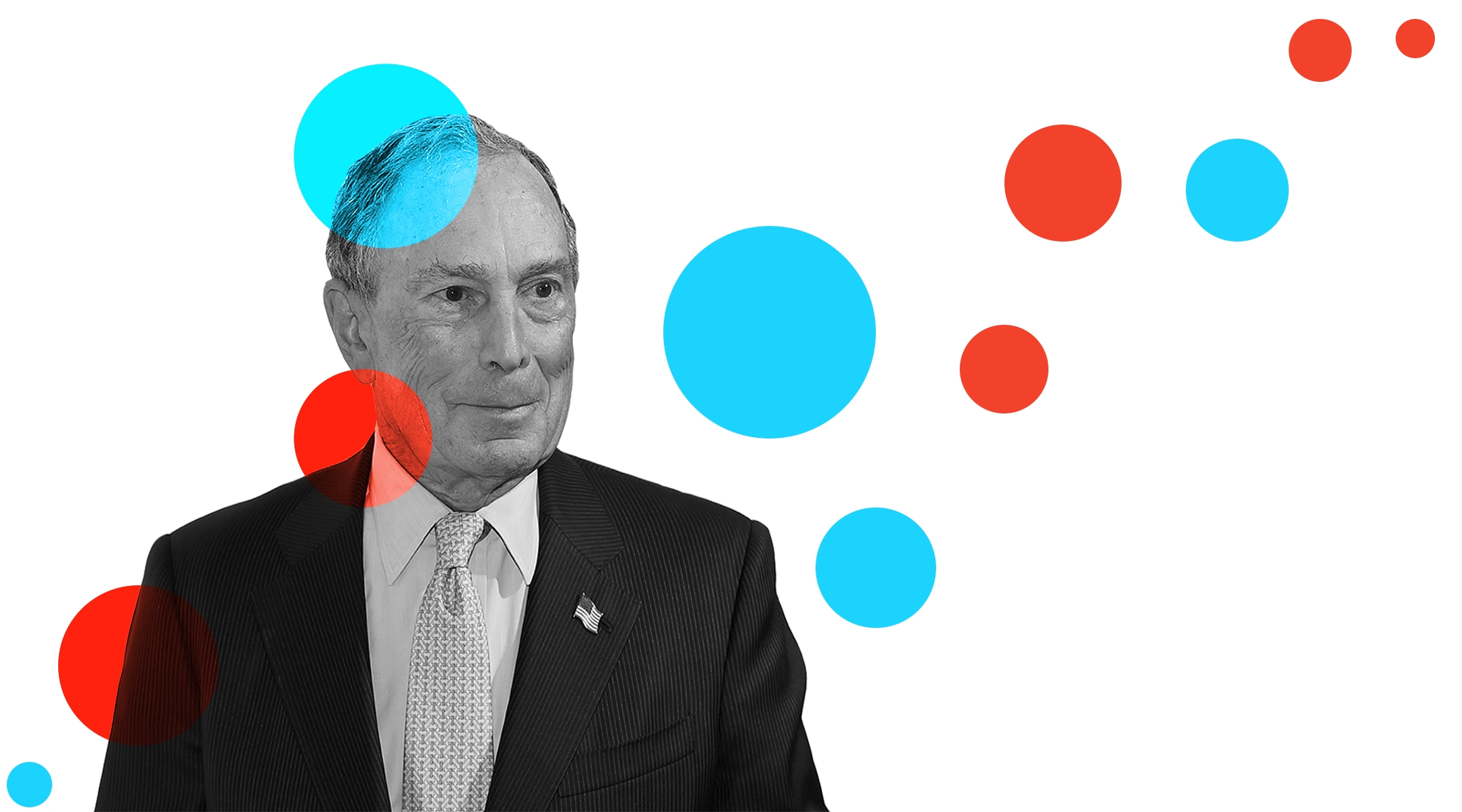 (JTA) — On Nov. 24, former New York City Mayor Michael Bloomberg made a belated entrance into the crowded 2020 Democratic field — despite insisting in March that he would instead “double down on the work that I am already leading and funding” rather than run.

The move has been polarizing in Democratic circles, but some are quick to point out that his vast wealth — over $54 billion, to be more specific — could still help him leave a big mark on the race.

Bloomberg grew up in an area of Massachusetts with few other Jewish families, yet lived in a kosher-keeping household and was bar mitzvahed. His hometown synagogue, Temple Shalom, was renamed the William and Charlotte Bloomberg Community Center of Medford after Bloomberg endowed the synagogue. He still attends High Holiday services, but his two daughters were not bat mitzvahed.

What has Bloomberg said about anti-Semitism?

In 2019, Bloomberg was the commencement speaker at Washington University in St. Louis. “We face a lot of hard challenges in America today – from climate change, to gun violence, to failing schools, to the opioid epidemic, and on campuses from the frightening trend toward racism, sexism, hatred, anti-Semitism, and intolerance of unpopular views and opinions,” he told the graduates. “To have any hope of overcoming these challenges, we have to start by reclaiming our civic dialogue from those who are debasing and degrading it – and preventing us from getting things done.”

Ahead of the 2018 midterms, Bloomberg released an ad with images of Pittsburgh in the aftermath of the synagogue shooting. “Political violence tears at the heart of our democracy. And violence against a religious group, in a house of God, tears at the heart of our humanity. At these moments of great national tragedy, we look to Washington to lead, to offer solutions, to bring us together, and to appeal to all of us as Americans,” Bloomberg says in the voiceover.

He also made a lot of statements on the topic during his 11-year tenure as mayor of New York City. Here’s an example from 2011 in response to anti-Semitic property crimes (“this kind of hateful act has no place in the freest city in the freest country in the world”). 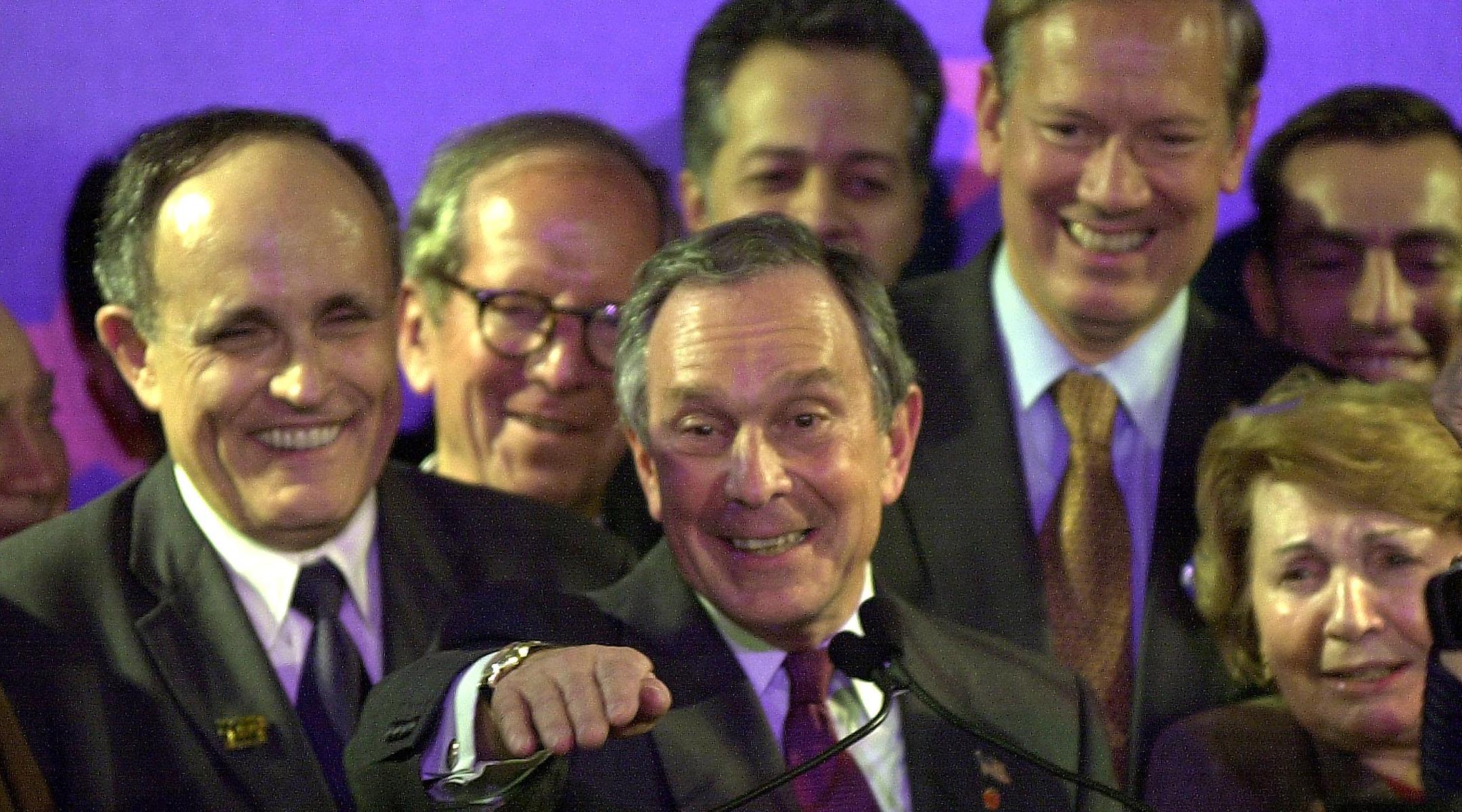 Where does Bloomberg say about the movement to boycott, divest from and sanction Israel — commonly referred to as BDS?

In 2013, Mayor Bloomberg said he “couldn’t disagree more violently” with BDS, and in 2014 called the movement “an outrage” that is “totally misplaced,” according to reporting from Jodi Rudoren.

However, he defended Brooklyn College’s decision in 2014 to co-sponsor a panel discussion about the movement.

“If you want to go to a university where the government decides what kind of subjects are fit for discussion, I suggest you apply to a school in North Korea,” Bloomberg said at a press conference in regard to the Brooklyn College controversy.

What is Bloomberg’s relationship with Jewish groups?

Bloomberg is a prolific philanthropist and has given to many Jewish causes. In addition to sponsoring the redesign of his childhood synagogue, his name is emblazoned on the Jerusalem headquarters of Magen David Adom — which he named the William H. Bloomberg MDA Jerusalem Station in honor of his father — and also dedicated the Charlotte R. Bloomberg Mother and Child Center at Jerusalem’s Hadassah University Medical Center to his mother for her 95th birthday in 2003.

While mayor, Bloomberg helped initiate (and donated $100 million to the effort to create) Cornell Tech, the high-tech research university on Roosevelt Island that is a joint venture between Cornell University and the Technion-Israel Institute of Technology.

Back when Bloomberg was a Republican, as mayor in 2004, he attended a reception at the party’s convention, held in that year in his city, hosted by AIPAC and the Jewish Federations of North America. Speaking to Jews he assessed were skeptical of reelecting George W. Bush president, Bloomberg said Bush was better than his Democratic rival, John Kerry, because Israel was “the one issue that matters.”

“No two people agree on everything, but when it comes to standing up for Israel, which I think is like standing up for America, George Bush has been there,” Bloomberg said.

What does he think about Israel?

In 2005, he visited Israel as New York mayor, leading a U.S. delegation in honor of the dedication of Yad Vashem, Israel’s Holocaust Museum. Bloomberg said, “This visit went to the very heart of why the State of Israel exists, and why it must always endure. This spring marks the 60th anniversary of the end of the Holocaust. We must never forget the enormous atrocities that were committed then.”

As we wrote at the time, Bloomberg is “conventionally pro-Israel.”

During the 2014 Gaza War, Bloomberg flew to Israel, defying a Federal Aviation Authority ban on flying into Israel. Bloomberg tweeted that he was there to show support for Israel’s right to defend itself,” and he wrote an op-ed in Bloomberg View explaining why.

What does he think of Netanyahu?

In 2014, he tweeted Netanyahu was “a great leader and friend.”

What is his position on the Israeli-Palestinian conflict?

Bloomberg is in favor of a two-state solution.

“My personal opinion is that you have to have a two-state solution because of the fact that both sides think God gave them the same piece of land. You have got to split the piece of land and each will have half of it. You have half a cake. It’s better than no cake. And it can bring peace. So, your people and my people and his people and her people can have a better life,” he told Arab News in September 2019.

What has he said on aid to Israel, or settlements, or annexation of the West Bank?

In 2011, Bloomberg was asked whether or not he would refuse to support President Obama’s reelection unless the president stopped pressuring Israel to halt new settlement construction. Bloomberg didn’t totally answer the question, but he said, “America’s support for Israel is something that I think is in the interest of all Americans, not just Jewish Americans, but all Americans and it’s a very important issue for me.”

Five years later, Bloomberg News ran an unsigned editorial condemning the outgoing Obama administration for abstaining on a U.N. Security Council resolution condemning Israel’s settlement policies. The New York Sun, a neoconservative online daily, seemed to think Bloomberg was behind the anonymous “editorial board” byline, congratulating him for the editorial.

In 2013, Bloomberg received the inaugural Genesis Prize — nicknamed the Jewish Nobel — which honors “individuals for their accomplishments and commitment to Jewish values.” Bloomberg used his prize money to establish a challenge for projects “guided by Jewish values.” The prize has since gone to Ruth Bader Ginsburg, Natalie Portman, and Michael Douglas, among others.