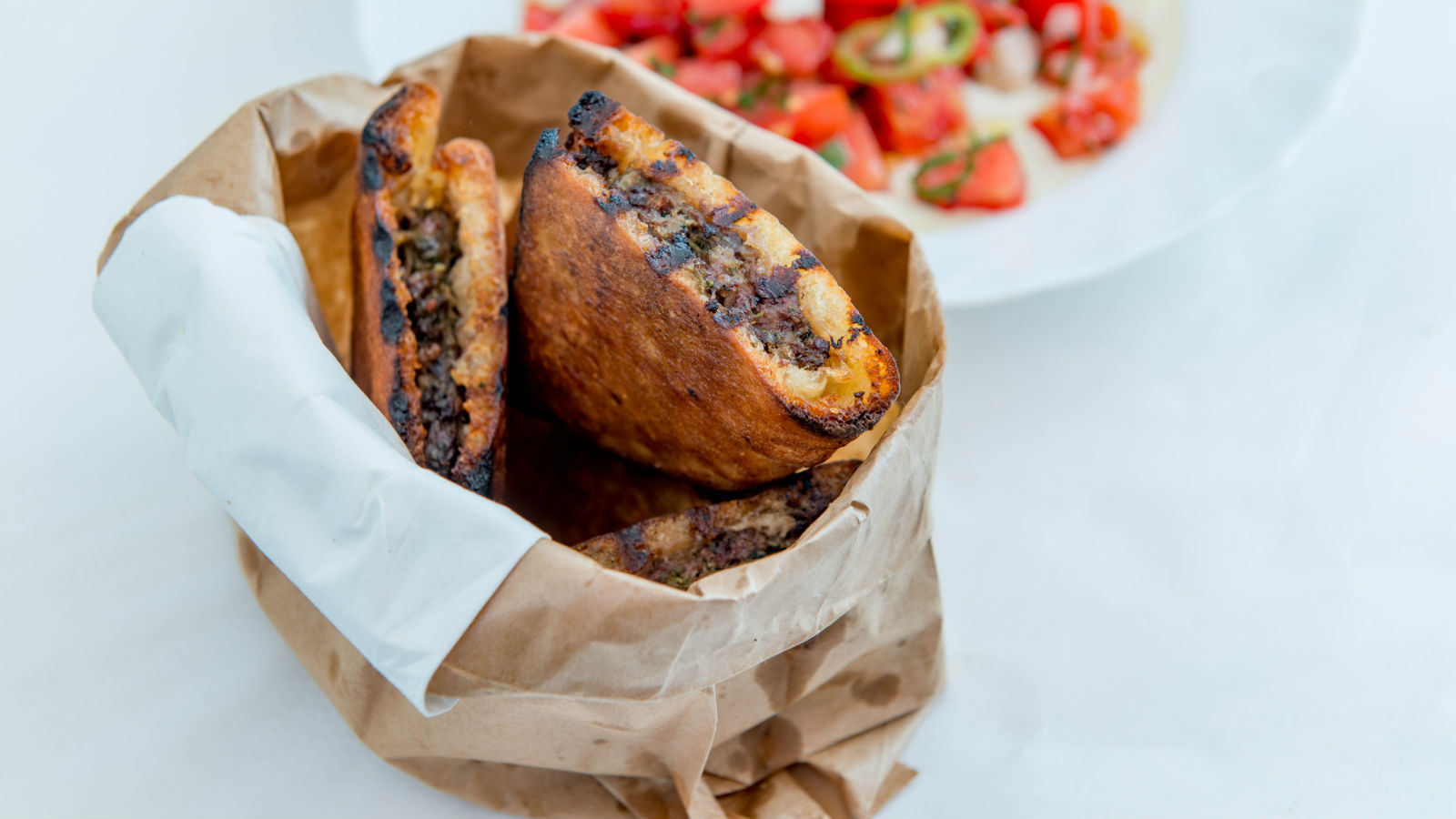 I first read about arayes — grilled pita sandwiches filled with ground lamb mixed with chopped onions, parsley and spices that are crispy on the outside and juicy within — a few years ago. The mentions increased over time, like a drum beat growing in intensity.

While I had lived in Israel and visited there often, I had never eaten one. But it became clear that it was something I had to do. Arayes were a new food THING.

Arayes have been around for a long time and there is lots of discussion as to their origins. Some say they come from the Galilee, others from Lebanon and still others claim it is a Palestinian dish.

Within Israel, however, there is no dispute that the local arayes craze started at M25, a small, unadorned meat restaurant in the Carmel Market in Tel Aviv.

“We’re not sure which Israeli chef first served arayes in a restaurant, but Jonathan Borowitz of M25 restaurant … definitely made it famous,” Einat Admony and Janna Gur wrote in their newly published cookbook “Shuk.” 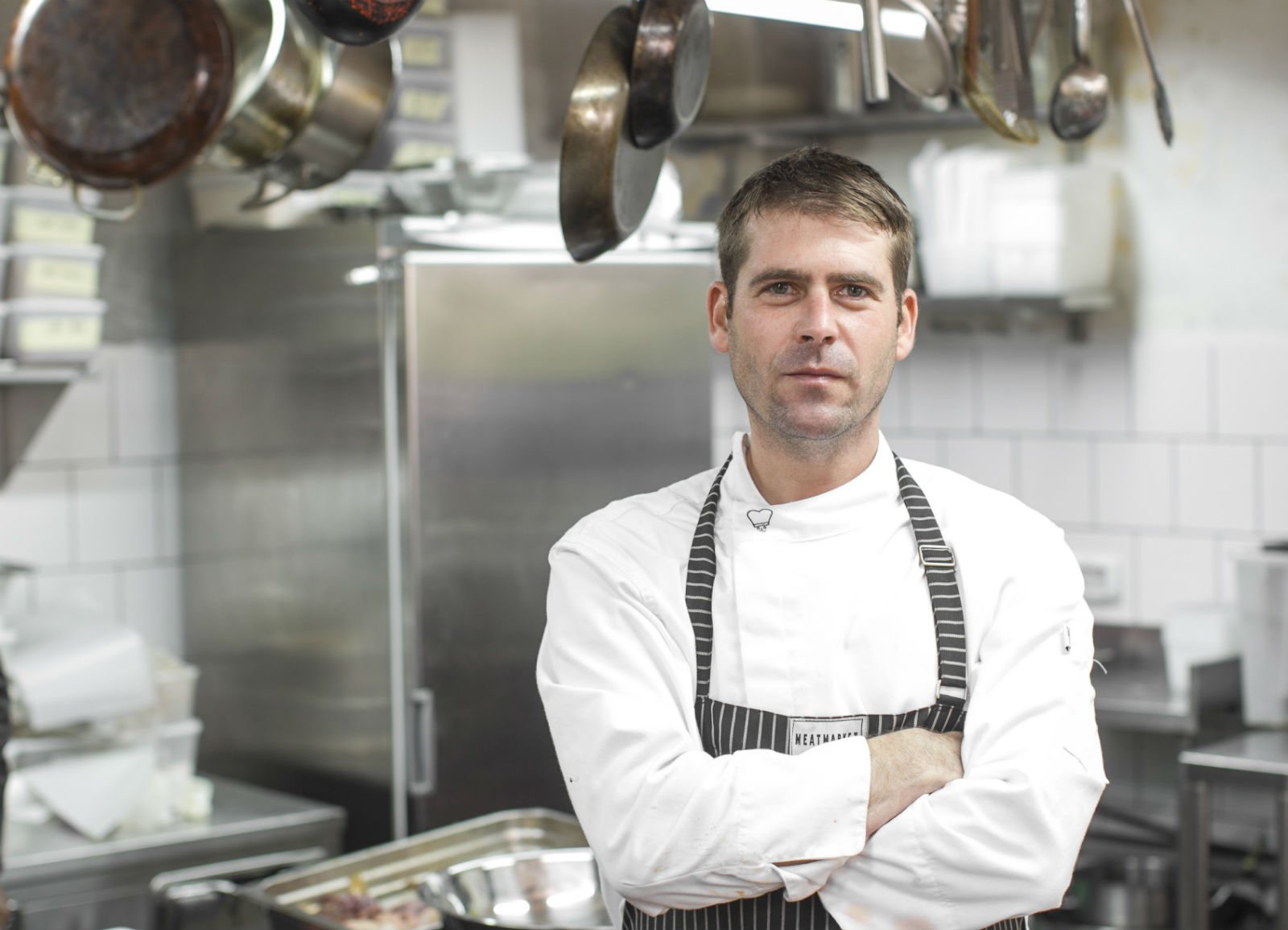 Jonathan Borowitz of the M25 restaurant in Tel Aviv is the Israeli chef who made arayes famous in Israel, a new book says. (M25)

M25 is paired with a butcher shop next door owned by Yaron Kestenbaum and Yaniv Bar-Nur. The restaurant got its name because it is only 25 meters from the butcher, so you know that the meat you eat in the restaurant — all locally sourced — is fresh. Meeting Borowitz recently at M25, not only did I get to eat the famed sandwich, but I got the answer to my question as to why the dish’s ubiquity started relatively recently.

M25 opened 4 1/2 years ago. While Borowitz was hoping to run a quiet, under-the-radar meat place next to his partners’ butcher shop, that was not to be. At the time he opened M25, Borowitz was already well known in foodie circles for his earlier Tel Aviv eatery, Cafe 48. When word got out that he was onto a new venture, people came.

“We opened on a Friday at noon,” Borowitz recalled. “We had three dishes on the menu. We had kebab. We had minute steak. And we had kebab inside a pita bread. Some tahini. Some tomatoes. Some potatoes. Some onions and that’s it. I wanted to keep things simple. I thought we will be like the Jaffa hummus place, Abu Hassan. Once we finish the food that we prepared, we will close for the day and I will go home. Or to the beach.”

The first day he opened, there were 200 people in line waiting to get inside. The following week his partners told him that they “wanted a particular type of kebab inside a pita. I said, “Ah!  You want arayes!’ I had seen that sandwich 15 years earlier in Nazareth.”

“I worked on the method of how to prepare the sandwich,” Borowitz continued. “It was obvious to me that I had to find the right factory for the pita. Then I would halve the pita, grill it, chill it, and then, when an order comes in, I would slice it and cut it into quarters, and place the bread on the grill so the flavor of the grill infuses all four quarters of the pita.”

Within short order, he perfected his take on arayes — crisp on the outside, succulent inside. They’re served with a plate of chopped tomatoes, placed on house-made tahini, and topped with a dollop of freshly made salted lemon spread.

“This is a perfect dish,” Borowitz said. “It has everything. Meat. Pita. Tahini. Tomatoes. No need to play with it.”

The restaurant now serves about 800 arayes a week — it’s M25’s most popular dish.

“Everyone knows we are the first, and now you see it all around,” Borowitz said. “It’s easy to make and it’s very Israeli in terms of the ingredients. While the dish was here before us, the way we executed it caused it to become an instant hit.  We ignited a revolution.”