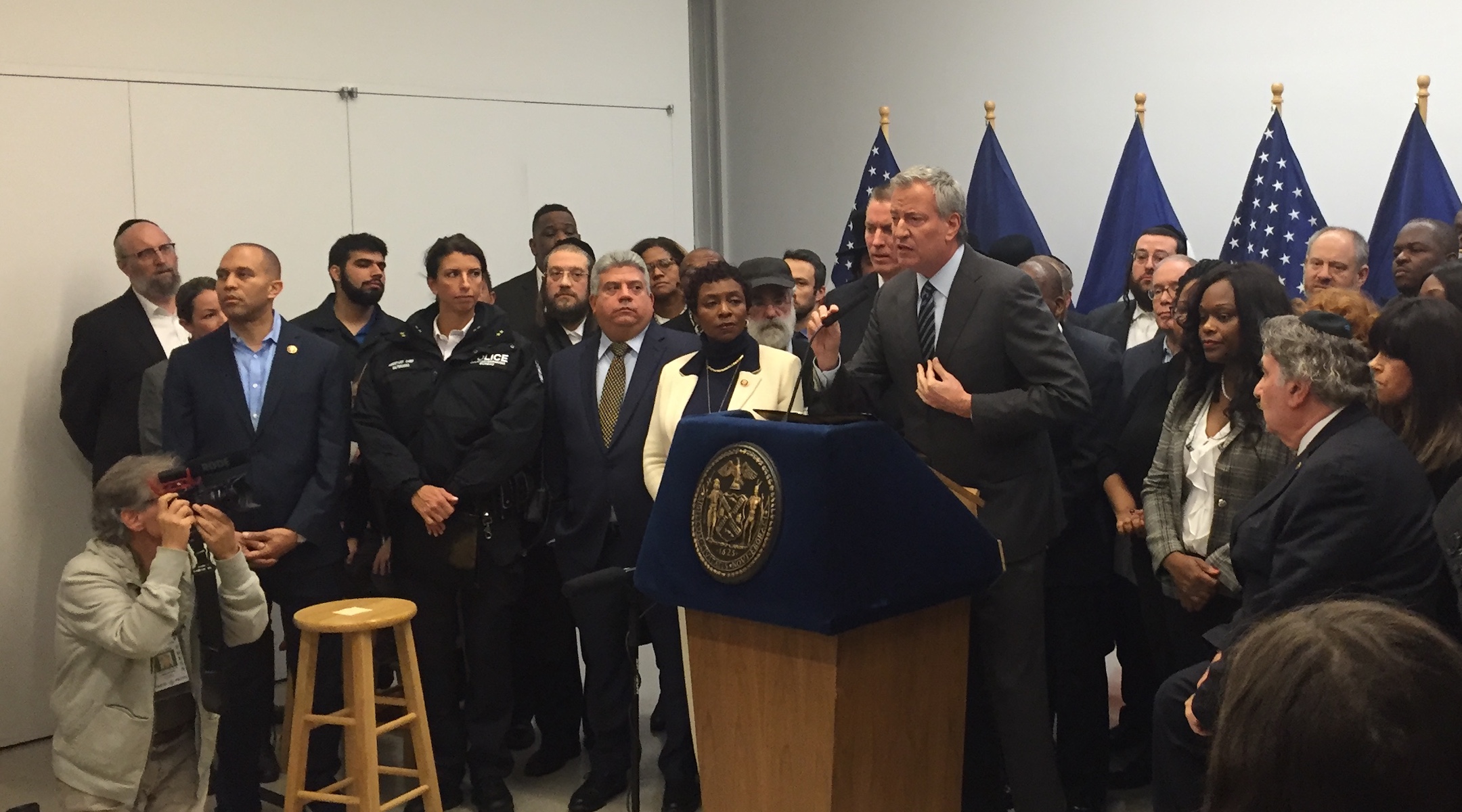 Mayor Bill de Blasio made the announcement at a dramatic news conference Sunday afternoon at the central branch of the Brooklyn Public Library following weeks of anti-Semitic assaults and vandalism that have plagued the city and state.

On Saturday night, an assailant broke into the Monsey, New York, home of Rabbi Chaim Rottenberg and used a long machete to stab guests gathered for a Hanukkah celebration. Five people were injured in the attack, which authorities have deemed a hate crime, and two remain hospitalized.

Three weeks earlier, two gunmen opened fire at a kosher supermarket in Jersey City, New Jersey, killing three people. The man and woman had killed a police officer prior to coming to the market, where they were shot dead in a lengthy gun battle with police.

First, the New York Police Department will increase its presence in Jewish neighborhoods, such as Borough Park, Crown Heights and Williamsburg, all in Brooklyn. The city will add lighting and security cameras to better protect Jews in those neighborhoods, which have been the major targets of the recent spate of attacks.

Second, the mayor will create Neighborhood Safety Coalitions to serve as watchdogs to help the NYPD in its efforts to stop anti-Semitic attacks before they happen. The coalitions will be comprised of New Yorkers from diverse backgrounds.

The third initiative will address anti-Semitic hatred with schoolchildren.

“We have to reach our young people more effectively,” de Blasio said. “Our young people have to understand this history, but we have to teach it to them. We will be adding immediately in these communities in Brooklyn additional curriculum in our schools starting next month to focus on stopping hate.”

Before the mayor’s remarks, Rabbi Bronwen Mullin of Congregation B’nai Jacob in Jersey City told the Jewish Telegraphic Agency that some members of the local black and Jewish communities have already joined together to address the hate crimes. She said that rising economic tensions caused in part by gentrification is affecting both communities and could be contributing to interethnic tensions.

“I can’t draw a direct line like that,” she said, “but there is a lot of anger about systematic injustice.”

After the attacks, Mullin put out a call to black activists to build coalitions and end gun violence.

“We had a joint Hanukkah and Kwanzaa candle lighting,” she said. “Everyone wants to do real work to address these issues.”

A theme of the news conference was the diversity of the group that had been assembled behind the speakers, which included Police Commissioner Dermott Shea, New York state Attorney General Letitia James, U.S. Reps. Hakeem Jeffries and Yvette Clarke, City Comptroller Scott Stringer and Brooklyn District Attorney Eric Gonzalez.

Rabbi Joseph Potasnik, the executive vice president of the New York Board of Rabbis, opened the news conference.

“Christmas has ended,” he said. “Hanukkah will end tomorrow night. New Year’s, on the secular calendar, will begin the next day. We should be celebrating this week, celebrating life and not an attack on life.”