New York Democrats condemn anti-Semitic attacks, but say they’re not sure why they are happening 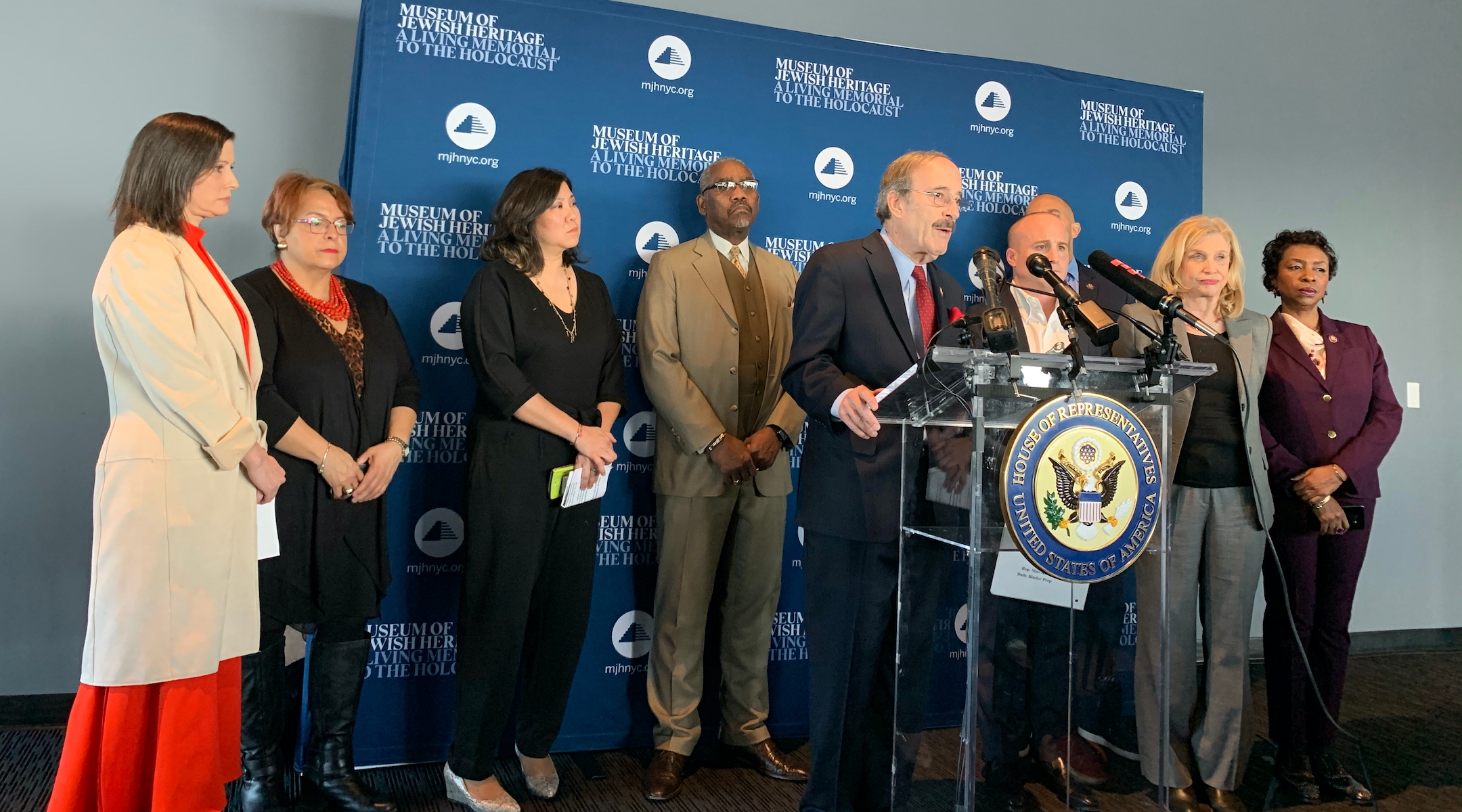 NEW YORK (JTA) — In the wake of several attacks on Jews in the New York area in recent months, seven House Democrats representing districts of New York City held a news conference to emphasize that they are committed to stamping out anti-Semitism.

But in addition to discussing initiatives designed to help decrease anti-Semitic attacks, the lawmakers admitted that finding specific root causes of the recent incidents is proving difficult.

“It’s not clear what is going on, but we are going to get to the bottom of it, and that’s why you’ve seen African-American leaders like [Reps.] Greg Meeks, Yvette Clarke, [Brooklyn Borough President] Eric Adams, and myself step up to speak out and to say we’re not going to tolerate this in our community,” Jeffries told the Jewish Telegraphic Agency after the event.

The lawmakers did not address the specific motivations behind recent attacks in the area, which have included a shooting at a kosher market in Jersey City and a machete stabbing at a rabbi’s home in Monsey, a suburb of New York City. Jews have been harassed and sometimes violently assaulted on the streets of Brooklyn for months.

Perpetrators of attacks on synagogues in Pittsburgh in 2017 and Poway, California, last spring had expressed white supremacist sentiments, but assailants in the recent attacks in Monsey and Jersey City were African-American. The Jersey City shooters expressed sympathy for the Black Hebrew Israelites, a movement of African-Americans who believe they are descended from ancient Israelites. The Monsey attacker appeared to reference the movement in his journals while also writing about Adolf Hitler and Nazis.

Some adherents of the Black Hebrew Israelite movement subscribe to anti-Semitic beliefs. Many but not all of the assailants in the incidents of harassment and assault in Brooklyn also have been African-American.

Clarke told JTA after the event she was not sure why the incidents were happening but that she was hopeful that recent initiatives announced by Mayor Bill de Blasio — including neighborhood safety coalitions, anti-hate education in middle and high schools and an advertising campaign to promote diversity — could help.

“I don’t know what’s in the mind of most of these young folks who we’ve seen in these incidents. I don’t think it’s reflective of a conspiracy of any sort of an ongoing dialogue of anti-Semitism. We have to figure out what it is,” she said.

Meanwhile Engel said he wanted to steer away from blaming any one group for the attacks.

“I don’t think their background is that important,” he told JTA following the news conference. “What’s important is that they have committed an anti-Semitic act, which we will not tolerate and we will speak out loudly against. Look — we know that anti-Semitism is mired in the right, with white supremacists, it’s been like that for years. And frankly in the left, we’re starting to see a little bit of that as well. So I am committed to fighting against anti-Semitism wherever it rears its ugly head.”

Engel, the chairman of the House’s Foreign Affairs Committee, and Rose, who is part of a group of moderate Democrats who held out before announcing their support for the impeachment inquiry against President Donald Trump, are both Jewish.

“This is a reality that we refuse to accept,” continued Rose, who led the conference. “Now in this time, thoughts and prayers though, in this time of skyrocketing violence, tweets are not enough. Action is what is required.”

Rose said the group of lawmakers had fought for an increase in grants for nonprofit security this year. Last month, Congress announced it was increasing that category of grant funding to $90 million, up from $60 million the previous year.

Rose also said that the group was working with partner organizations in New York City to hold workshops in the coming months to help religious organizations file grant applications.

Maloney mentioned a bill she introduced to improve Holocaust education and said that she and others were calling for a special FBI unit to combat anti-Semitism and hatred nationwide. Meeks and Rose also spoke about the need for social media sites to fight hate on their platforms.

Engel talked about the significance of having the event at a Holocaust museum.

A statement issued Sunday night in the name of the family of the Monsey attacker said he “had a long history of mental illness and hospitalizations” and “no known history of anti-Semitism,” The New York Times reported.

Rose, who flipped his district from red to blue last year, was asked whether he blamed the rise in anti-Semitism across the U.S. on President Trump.

“I’m not standing here today, and this is speaking for myself and not the delegation, to point the blame on the rise of anti-Semitism at the president. With that being said though, I have found the president’s statements like, ‘Good people on both sides,’ his woeful and wiling defense of the rise of white nationalism as horrendous, xenophobic in nature and despicable,” he said. “But this problem that we see today is far more complicated than just pointing to the president.”