What the killing of the top Iranian general Qassem Soleimani means for Jews, the US and Israel 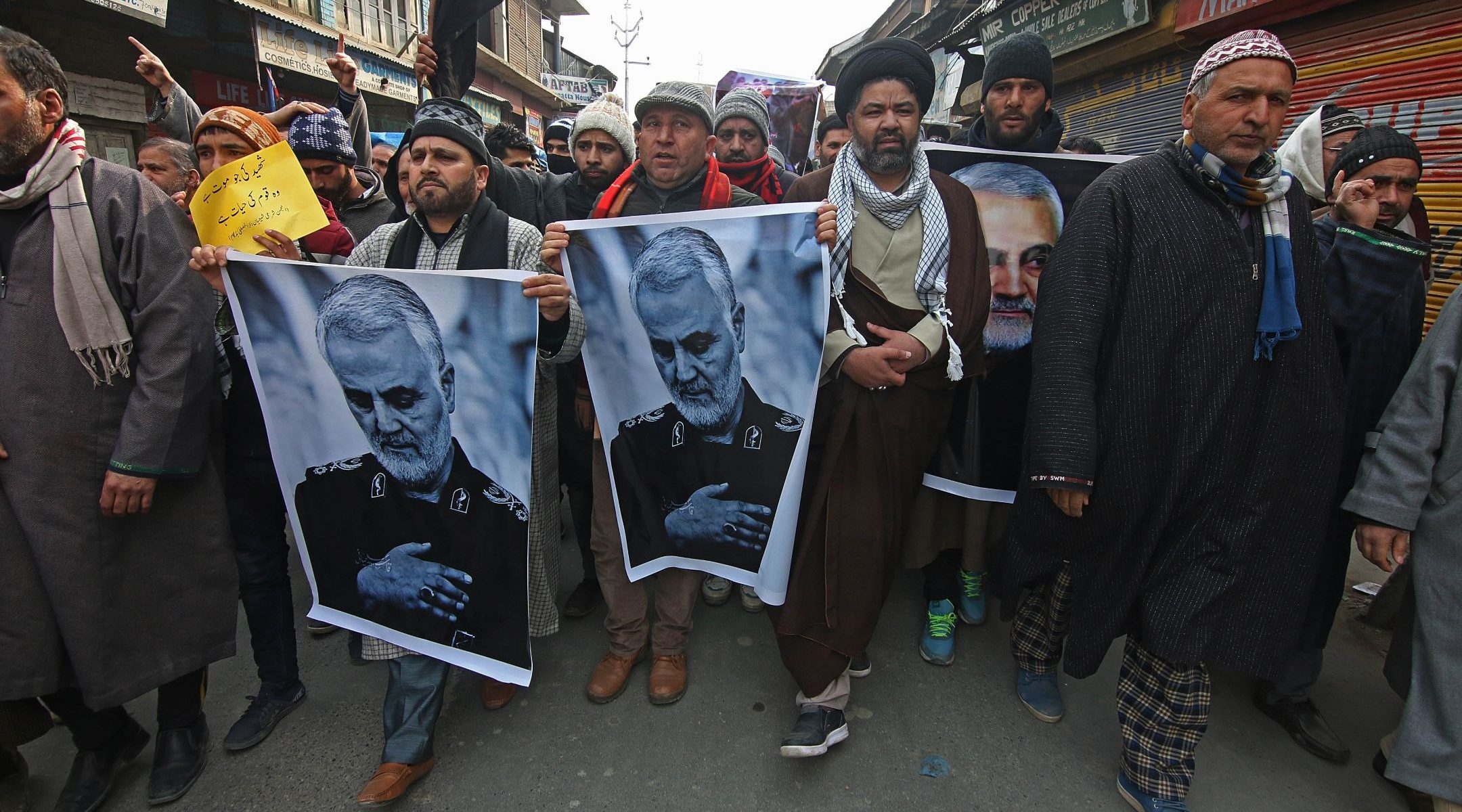 WASHINGTON (JTA) — A U.S. strike on a vehicle near Baghdad airport early Friday morning killed Qassem Soleimani, Iran’s most influential military commander. Soleimani was the leader of the Iranian Quds Force, which had ties to American and Israeli enemies such as Hamas and Hezbollah, and was directly responsible for some of the actions against Israel in Hezbollah’s war against the Jewish state in 2006.

Washington has been gripped by talk about what comes next — a real war between the U.S. and Iran? Iranian strikes on Israel? a string reaction of chaos across the Middle East? — but little actual insight as to what may ensue.

Still, there are already signs that one possible outcome is being taken seriously: attacks on domestic targets, including Jewish ones, like the gathering this past weekend of thousands of Jews to protest anti-Semitism in New York City. New York Mayor Bill de Blasio said on Twitter that he had spoken with top police officials about “immediate steps” the NYPD will take to protect key city locations from “any attempt by Iran or its terrorist allies to retaliate against America.”

Here’s what you need to know about the assassination, and what it means for American Jews and Israel.

Who is Qassem Soleimani?

Soleimani, 62, a general, ran the unconventional warfare arm of Iran’s Islamic Revolutionary Guards Corps. The IRGC itself is an unconventional creature: Separate from and more powerful than Iran’s army, it is dedicated to the theocracy’s religious mission.

The Quds Force operates mostly outside Iranian territory, controlling to a degree some pro-Iranian militias in Iraq, Syria and Lebanon, and allying with others. Its most critical alliance is with Hezbollah, the terrorist militia based in Lebanon that is intertwined with that country’s government.

“The loss of our dear General is bitter,” Khamenei said on Twitter. “The continuing fight and ultimate victory will be more bitter for the murderers and criminals.”

American officials have blamed Soleimani for the deaths of at least 600 U.S. troops who have been deployed to the region since the Iraq War in 2003.

That’s not immediately apparent. The Clinton, George W. Bush and Obama administrations all had to deal with Soleimani and his provocations but did not strike because the possibility of violent retaliation in the Middle East and beyond was likely.

What is known is that tensions have been rising in the region. Iran and the U.S. have been taking shots at each other’s forces. Iran downed a U.S. drone over the summer and wounded Saudi Arabia’s oil delivery capacity. Late last month, a proxy Iraqi militia killed a civilian U.S. contractor in Kirkuk. The U.S. retaliated by hitting five Iran-affiliated targets in Iraq and Syria, killing at least 25 people.

The Pentagon and Secretary of State Mike Pompeo said there was intelligence of Iranian plans to attack diplomats and members of the military throughout the region, but the top lawmakers in Congress apprised of such intelligence said they were in the dark and demanded to know more. House Speaker Nancy Pelosi said the action was taken “without the consultation of the Congress,” and the acting Homeland Security secretary, Chad Wolf, said in a statement that there was “no specific, credible threat” on the homeland.

Eric Edelman, a former undersecretary of defense for policy under George W. Bush, praised the action in a conference call organized by the Jewish Institute for National Institute of America but said Trump should make a long-term policy clear.

“You don’t restore deterrence with one act,” he said. “It’s got to be seen as something that’s consistent.”

Tamara Cofman Wittes, a former top Middle East official in the Obama State Department and now a senior fellow at the Brookings Institution, said it was hard to discern a pattern in a presidency that alternates between pledges to pull out of the region and escalations like the Soleimani assassination.

“Clarity of intentions would be great,” she said. Trump has “announced our withdrawal from Syria more than once and U.S. forces have still not withdrawn from Syria. He says he doesn’t want to get into wars and he’s just engaged in a significant escalation of tensions. There’s a lot of confusion.”

Notably, reports later Friday said the Pentagon was sending at least another 3,000 troops to the region.

Does Iran retaliate, and when and where?

Iranian officials are signaling they will retaliate, but when and where is hard to say. Iran has been known to play a very long game. The 1994 bombing of a Jewish community center in Argentina that killed 85 is believed to be revenge in part for the 1992 killing of a Hezbollah leader. The killing of Imad Mughniyeh, a Hezbollah operational chief believed to have been killed by Israel and the United States in a joint 2008 operation, has yet to be avenged.

Yaakov Nagel, a former Israeli national security adviser, told the Israeli daily Yediot Acharonot that revenge in this case was all but a certainty — Soleimani was several orders of importance greater than Mughniyeh. Khamenei saw the Quds Force chief as a son.

Michael Masters, who directs the Secure Community Network, the security arm of the national Jewish community, echoed de Blasio’s warning. SCN sent out an alert to Jewish communities after the attack urging them to be on the alert for suspicious activity.

Masters said in an interview that institutions should double down on their everyday checks and call into local law enforcement.

“Things as routine as checking access control, making sure doors that are usually locked are locked, making sure alarms are in working order,” he said.

Masters said to be more aware of suspicious individuals surveilling or attempting to access Jewish institutions.

He said Iran and its proxies were especially active in cyberattacks and urged extra vigilance in that area.

“Spearfishing, spoofing attempts, requests for personal information,” he said. “It is a way of disrupting the community, of undermining confidence, and having a real impact is very easy to execute. The Iranians and their proxies have shown particular proficiency with it.”

What does his removal mean for Israel?

Israeli Prime Minister Benjamin Netanyahu was almost alone among foreign leaders in welcoming the strike. France, Russia and China condemned the attack as destabilizing, and Pompeo spent much of Friday on the phone with regional and world leaders pledging to de-escalate tension in the region.

“Just as Israel has the right of self-defense, the United States has exactly the same right,” Netanyahu said in a statement. “Qassem Soleimani is responsible for the death of American citizens and many other innocent people. He was planning more such attacks. President Trump deserves all the credit for acting swiftly, forcefully and decisively. Israel stands with the United States in its just struggle for peace, security and self-defense.”

“The president’s decisive action brought to justice one of the world’s most dangerous terrorists, who was responsible for the deaths of over 600 U.S. servicemen,” the pro-Israel lobby stated.

However, Netanyahu and the head of the Israeli Defense Forces have since sought to distance themselves from the attack, likely in order to avoid further provocation.

“The assassination also has ramifications for us as Israelis, and we must follow it closely, but we aren’t the main story here — and it’s good that it happened far away,” Maj. Gen. Herzi Halevi said at a conference in Jerusalem.