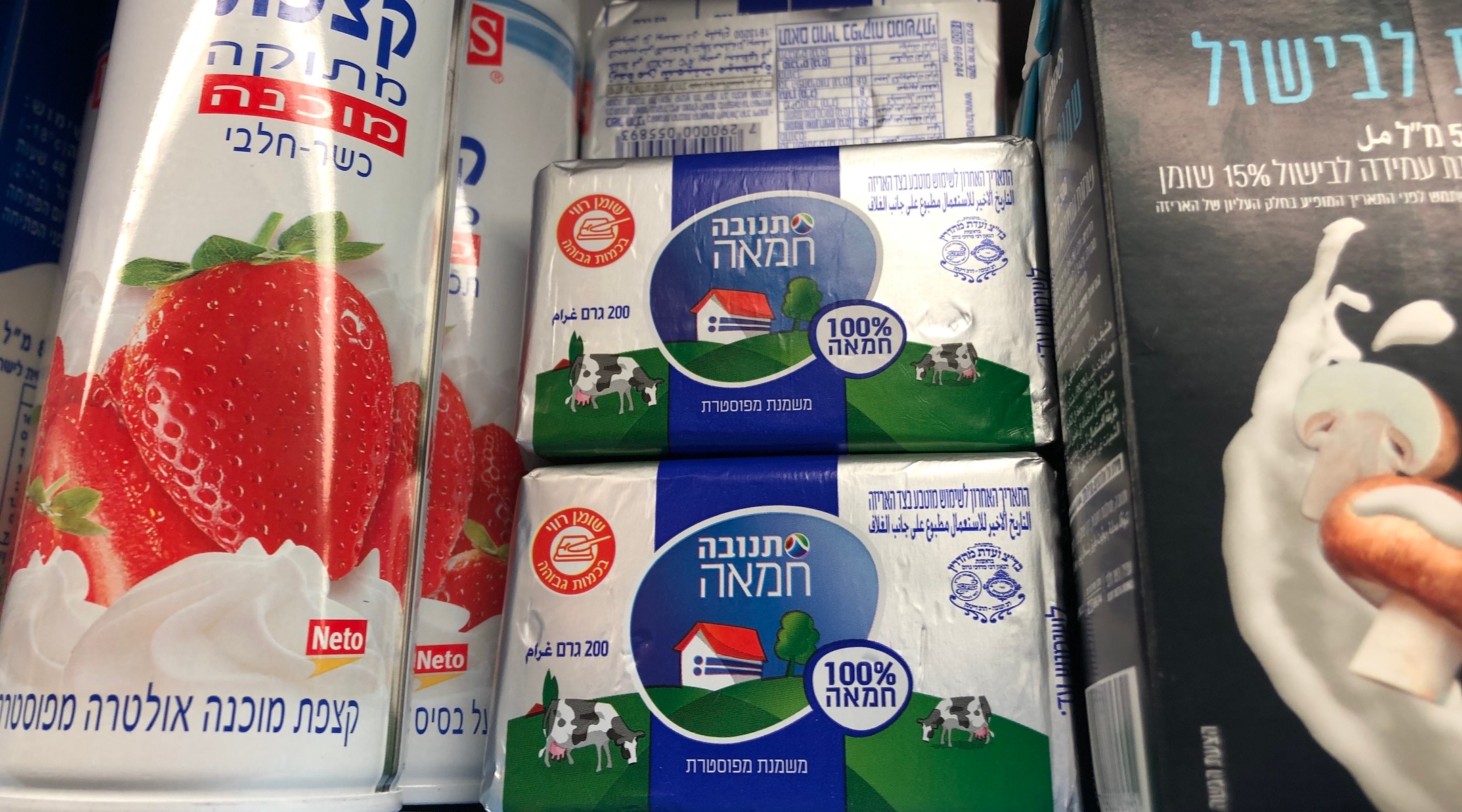 Butter is back on some shelves in Israel. (Sam Sokol)
Advertisement

JERUSALEM (JTA) — The land of milk and honey has been short of one of the most commonly used dairy products: butter.

Since early 2019, butter has become such a scarce commodity that Israelis have taken to sharing rare sightings of it on social media. Some, like Rahel Jaskow, have even begun making their own at home.

“I wanted fresh butter and buttermilk without having to worry about the shortage,” Jaskow told the Jewish Telegraphic Agency. “I bought 32% whipping cream and churned butter from it using several methods. Finally I bought a Kilner butter churn since I believe in using the right tool for the job. It’s working out very well.”

Others have tried importing it from other countries.

“I have tried every store to get butter,” Amanda Bradley, a British immigrant living in Beit Shemesh, wrote on Facebook. “We got my mother to bring us butter from the UK!”

While butter, both domestic and imported, has been trickling back onto shelves in recent weeks, leading some consumers to loudly declare that the problem has been solved, a spokesperson for the Israeli Ministry of Agriculture told JTA that “a shortage of local butter is also expected in 2020.”

The problem, explained Ayal Kimhi, professor of agricultural economics at Hebrew University and the vice president of the Shoresh Institution for Socioeconomic Research, is that while Israel is for the most part a capitalist society, “the dairy market is officially regulated in terms of quantity and prices.”

Like in the Soviet Union of old, Israel’s contemporary dairy sector is a “planned” one in which prices are set based on demand forecasts and which works to protect local manufacturers from competition from foreign imports.

In recent years, domestic demand for butter has increased, and in order to produce more, Israel’s dairies have required more milk fat, which is unavailable in the necessary quantities because local milk cows have been bred for years “to produce as much milk as possible but not necessarily as much fat as possible,” Kimhi explained. There are ways around this but they are costly and come up against limits on milk production set by the state.

One possible solution would be to import foreign butter (which has itself increased in cost significantly), which would require a government quota exemption. Early efforts to alleviate the shortage by allowing more imports fizzled, Israeli business daily Globes reported in April, due to a decision to apply local price controls to the foreign products. 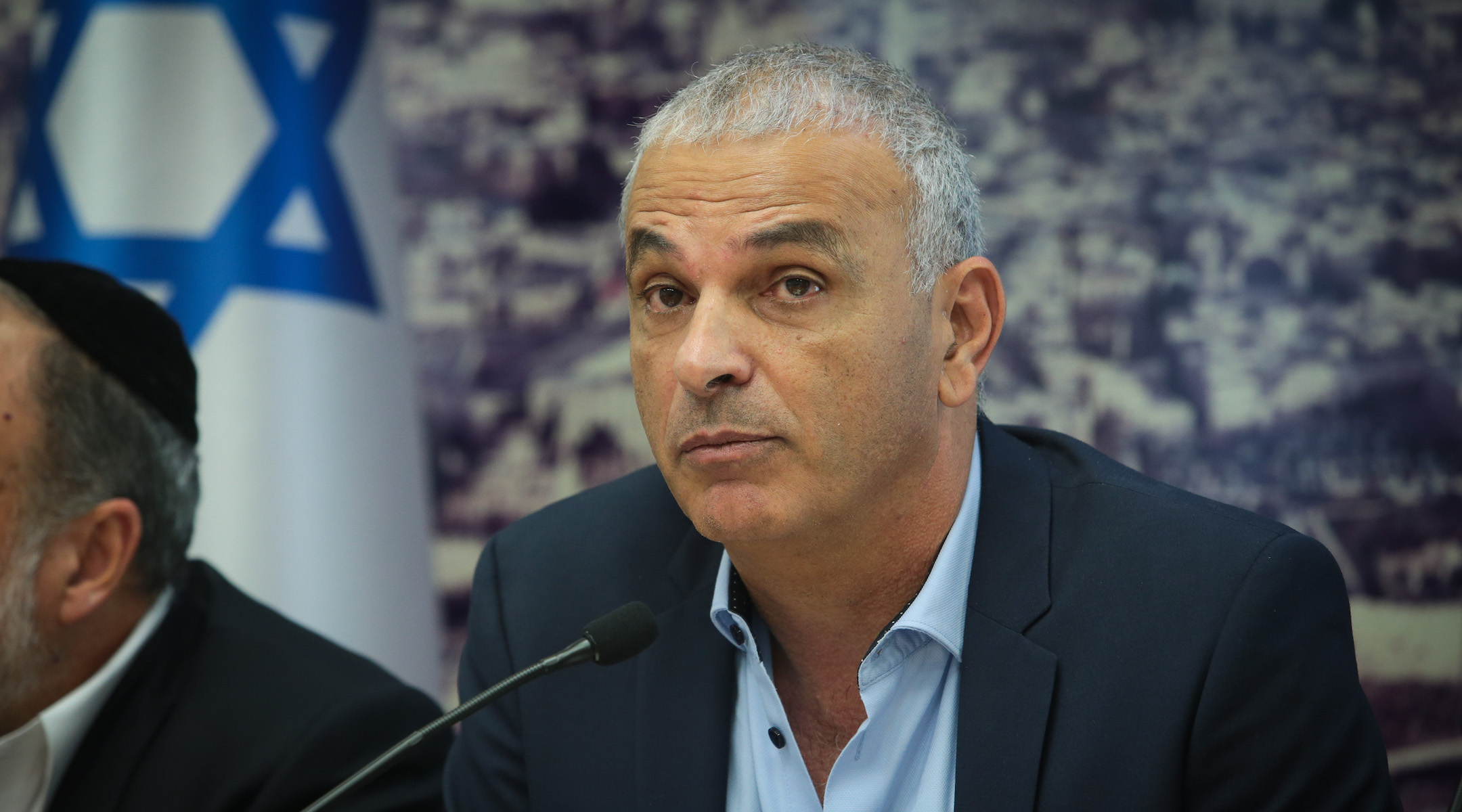 Israeli Finance Minister Moshe Kahlon at a press conference with at the Finance Ministry office in Jerusalem, Sept. 23, 2019. (Flash90)

The price for butter is set by a joint committee comprised of representatives of the ministries of finance and agriculture, which recommended more than a year ago to raise prices in order to make importation and local manufacture more fiscally attractive for the big firms that control the market. However, “the politicians had their own agendas and the minister of finance [Moshe Kahlon] refused to raise the price” due to election-related considerations, Kimhi said.

“So if on any import of butter or milkfat you have to pay a higher price and you can’t increase the price for consumers, it’s a losing business,” he said. “So the blame is not on the ministries or [dairy giant] Tnuva but on the price control of butter itself.”

That isn’t to say that Israel’s dairy industry and the various ministries involved in the issue haven’t been busy blaming each other for the problem.

Asked for comment, a representative of Tnuva told JTA that the “only reason” for the shortage was “the lack of fat in the dairy industry, which is controlled and managed by the state that determines the milk quotas to be supplied to the market” and that it hoped “that this time importers will actually import the quota of butter they have recently received from the state.”

And indeed, since Moshe Kahlon announced in November that he was again relaxing restrictions on imports, foreign products have begun to appear on store shelves, at higher prices than their domestic counterparts.

But despite some modest improvements, the Ministry of Agriculture has said that it believes the shortage will last into the new year. With customs on butter standing anywhere from 126 to 160 percent, “consumers’ interests and not those of the dairies should be the top concern of the Minister of Finance and Minister of Economy.”

The Ministry of Finance did not respond to a request for comment.

In the meantime, many consumers are still left with a curdled feeling.

“When it’s at the shop they sell just two packages to a person,” Oksana Abigail Strunsky complained on Facebook. “It’s not normal.”