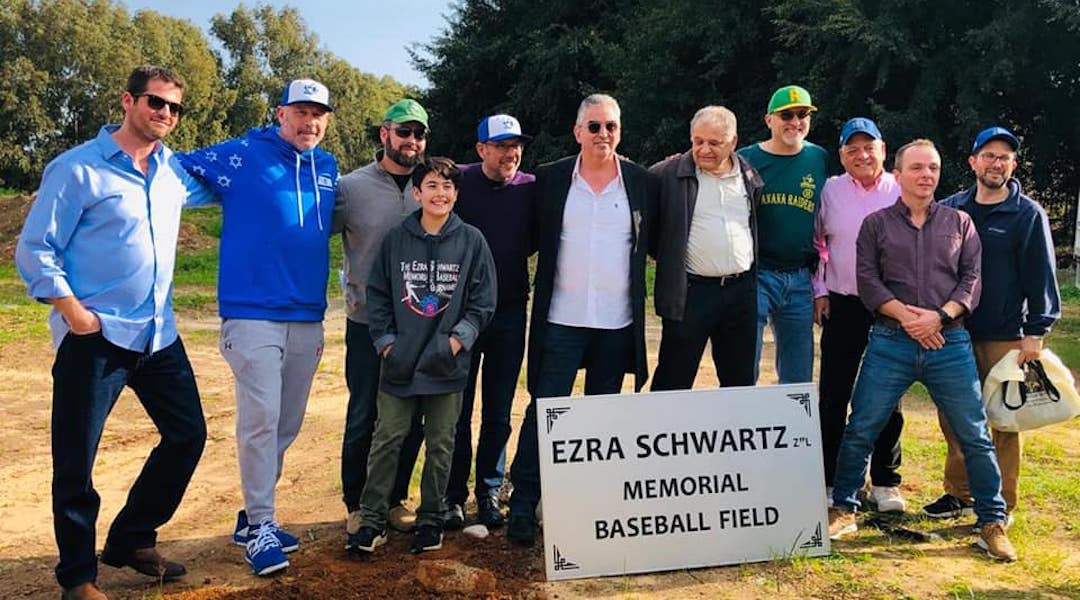 People opening the field in Ezra Schwartz's honor. (A Field for Ezra/Facebook)
Advertisement

JERUSALEM (JTA) — American teen Ezra Schwartz will never play on the baseball field in Raanana that bears his name.

But hundreds of Israeli young people, including some of Ezra’s cousins, will have the chance. In doing so, they will be honoring the memory of a young man who was on his way to volunteer at a nature preserve when he was killed in a 2015 terrorist shooting in the West Bank.

Last week, Israeli teens and their parents, joined by Israel’s Olympic baseball team, which is preparing for the Tokyo games this summer, held a groundbreaking for what has been dubbed “A Field for Ezra.” Organizers hope the field, located in Raanana Park in central Israel and built with funds raised by the Schwartz family, the Jewish National Fund and the Israel Baseball Association, will be ready for baseball activities by the fall.

In a message read at the ceremony, his father said Ezra was “a boy who loved baseball.”

“Nothing made Ezra happier than being on a baseball field. I can’t imagine Ezra’s life without baseball, and I can’t imagine growing up and not having a field to play on,” Ari Schwartz said in the message, which was read last week by the teen’s uncle, Yoav Schwartz of Raanana. “Now these boys and girls in Israel will have that.

Ezra was studying for a year at Yeshivat Ashreinu in Beit Shemesh before he was on track to enroll in Rutgers University in New Jersey when he was killed. A Palestinian attacker shot into the minivan in which Ezra was riding through the Etzion bloc. Ezra, who lived in suburban Boston, was 18.

The park, which now bears a trail dedicated in the teen’s memory, had been established a year earlier in memory of three Israeli teenagers who were kidnapped in June 2014 by Palestinians from a traffic junction in Gush Etzion and later killed by their captors. The area had been a neglected forest filled with garbage that was being converted into a nature reserve.

In addition to his love for baseball, Ezra was a devoted New England Patriots fan, and the NFL team honored him with a moment of silence just days after his murder – flashing a photo of him on video screens at Gillette Stadium wearing a team jersey. Team owner Robert Kraft, who is Jewish, paid a shiva visit to the family.

Ezra, his father said, loved being in Israel for the year before college, and he was excited about the growth in popularity of baseball there.

Hundreds of Israelis, mostly boys, play on Raanana baseball teams starting in the third grade. (There’s a girls’ softball league, too.) Raanana also has a professional team, the Express, in the Israel Association of Baseball. But the city has been without a field for several years, with condominiums being constructed on the site of the old field. The teams have been using one of IAB’s main fields in Petach Tikvah as their home.

Ari Schwartz in his message talked about the life lessons that both he and his son learned from baseball.

“Baseball taught him a lot. It taught him not only self-confidence and pride, but also how to fail and that it’s OK to fail,” the message said. “It taught him that hard work matters, that practice matters. It taught him to cheer for your teammates and listen to your coaches. He became a great teacher and passed on what he learned not only to his teammates and brothers but also to me. I became a better coach and better father by learning from Ezra.

Ari Schwartz called building the field a response to terrorism and a way to celebrate his son’s life. But then reality takes hold.

“This will not be a field of dreams like in the movies,” he said. “I will never be able to have a catch with my son again.”