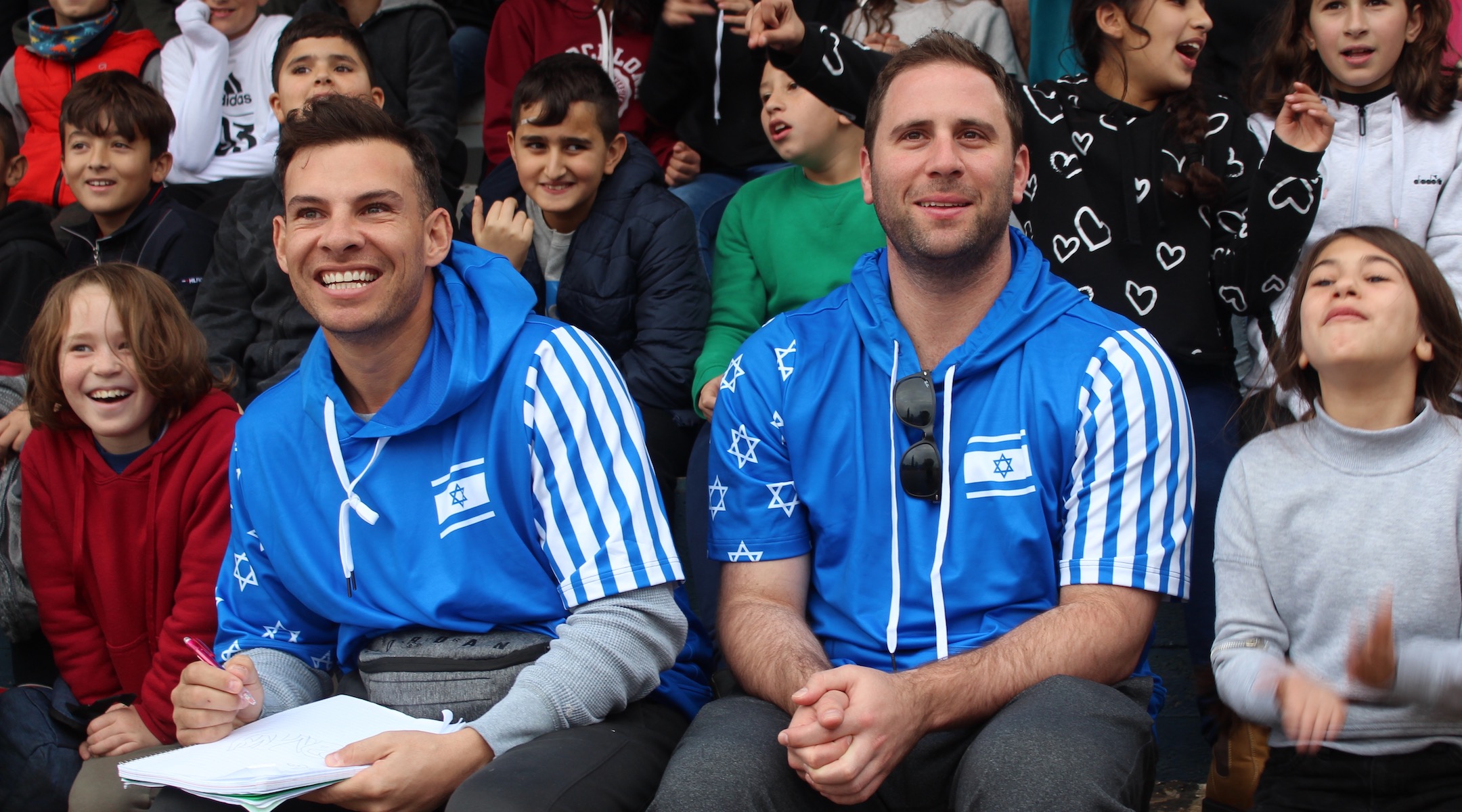 MISGAV, Israel (JTA) – As more than 20 men wearing blue-and-white baseball uniforms walked along Tel Aviv’s bustling Allenby Street on a recent Tuesday, a motorcyclist called out in Hebrew and English.

“Good luck! We’re behind you!” the man shouted to the group, members of the baseball team that will represent Israel at next summer’s Olympics in Tokyo.

The biker’s support “was meaningful to us,” said Jon Moscot, a pitcher. “It was authentic. He wanted to give us encouragement.”

Moscot recalled the scene two days later at a sports center here in the mountains east of Haifa, where the team was conducting baseball drills for nearly 200 children. It was one of several events organized during the club’s week-long visit to Israel meant to grow the sport in a country where baseball is barely known. With the Olympics just six months away, the team’s visit seemed to offer great public relations potential.

The delegation consisted primarily of American Jews who flew in from the United States after acquiring Israeli citizenship that enabled them to represent Israel in the Olympics. They included former major-league players like Moscot, Ty Kelly, Danny Valencia, Zack Weiss and Jeremy Bleich. Former big leaguers Josh Zeid and Ryan Lavarnway, who didn’t make the trip, also became citizens and are vying for roster spots.

The Olympics squad is Israel’s first-ever in baseball and only the fourth in any team sport — winter or summer. Israel hasn’t had a team make the cut since soccer at the 1976 Games in Montreal.

The team’s success in four European tournaments last summer catapulted it to the Olympics and is prompting loftier aspirations. Israel Association of Baseball president Peter Kurz told reporters in Tel Aviv at a press conference Jan. 13 that he’s aiming to earn a medal in Tokyo.

With just six teams competing, it’s not an unreasonable goal. But team manager Eric Holtz pledged only that his players would compete hard throughout.

“Every time this team gets on the field, it has a chance to do great things,” said Holtz, a New Yorker who managed the American juniors to gold at the 2017 Maccabiah games.

Kurz and Holtz expressed hope that the team’s Olympics debut spurs a doubling in the number of Israeli youth and adults playing baseball, from 1,000 to 2,000, over the next two years.

Accommodating such growth would necessitate building far more baseball fields than the three existing now: at Tel Aviv’s Sportek; at the Baptist Village complex in Petach Tikvah; and at Kibbutz Gezer, about midway between Jerusalem and Tel Aviv. This month’s delegation attended groundbreaking ceremonies for new fields in Raanana and Beit Shemesh.

No one harbors illusions about baseball upsetting the country’s sports order. Even Israeli President Reuven Rivlin, at a welcome he hosted for the team, said it’s “not a secret that I prefer soccer.” 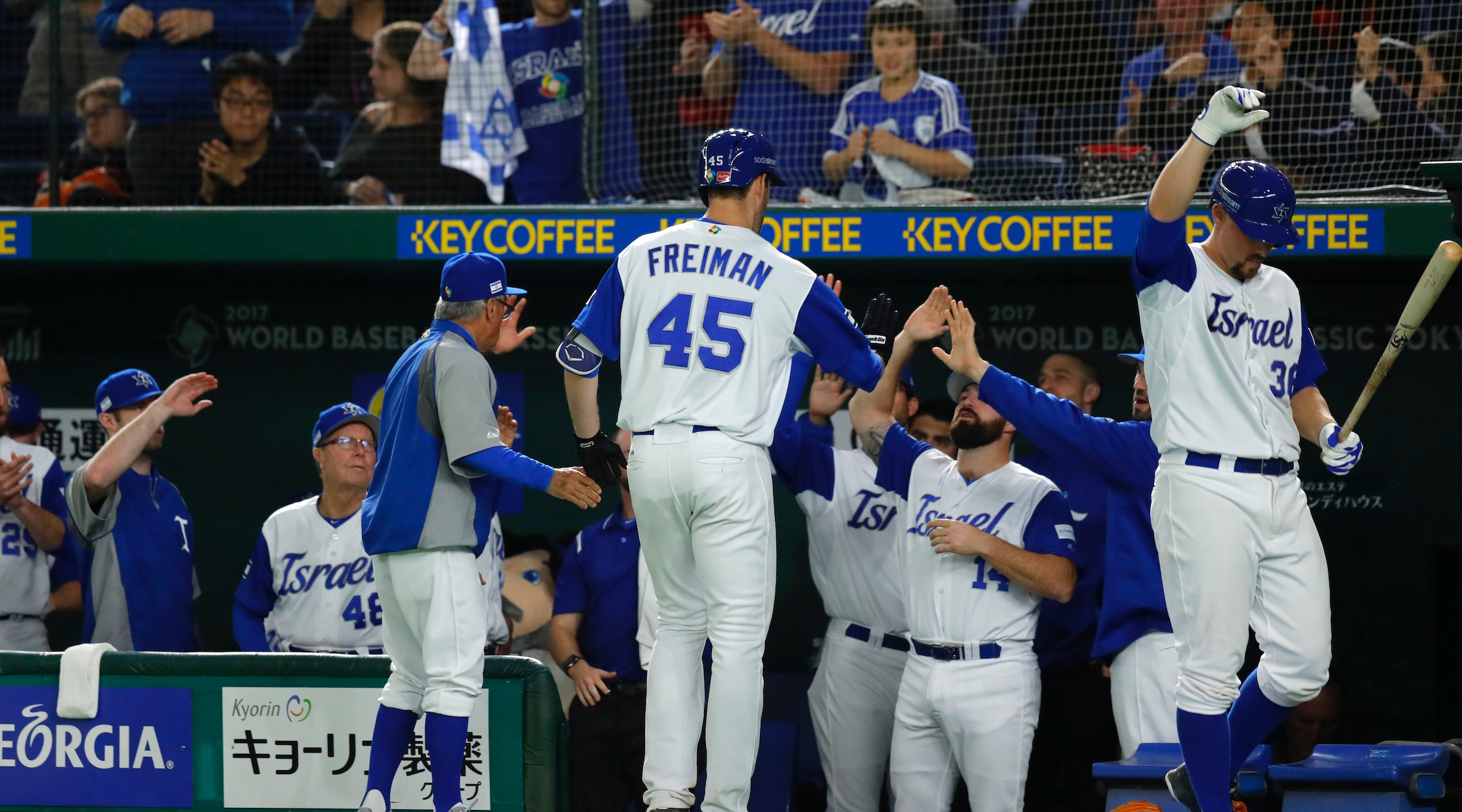 Team Israel players shown during a game of the 2017 World Baseball Classic in Tokyo, March 13, 2017. (Yuki Taguchi/WBCI/MLB via Getty Images)

Still, the run-up to the Olympics provides key exposure for the sport. Gilad Lustig, director general of the Olympic Committee of Israel, said that the country will send 85 athletes to Tokyo — its largest-ever contingent.

“I have no doubt that this group will represent us well,” he said of the baseballers.

Infielder Zach Penprase said that compared to his first visit to Israel in April, Israelis have a heightened awareness of the baseball team. Some Israelis he met told him they had watched the European tournaments online.

Moscot, a fellow Southern Californian who has visited the country three times as a team member, said he has noticed “more and more passion” for baseball among Israelis.

“These are the people who give us that extra push, that extra incentive, to do well for the country,” he said. “This is for sure a different trip, because the kids have Olympic athletes to look up to. It’s been very redeeming for us to see how passionate these kids are and how much potential there is in this.”

Moscot gestured toward the children gathering near his teammates to begin drills.

“You can see it in their eyes,” he said. “The parents want them to be here, and the kids want to be here. They genuinely want to learn.”

One such family included Yoav Nov-Kolodny, 11, and his brother Yoni, 8. The boys gravitated to baseball three years ago during a sabbatical in Boston with their father Yuval Nov, a statistician. Since returning to Israel, Yoav has taught the game to his friends using just a bat, two baseballs and three gloves he brought back from America.

His chums soon ordered their own equipment, expanding the circle’s ballplaying possibilities.

“We play three to five times a week. It’s so fun to play,” said Yoav.

Watching his sons take instruction from the soon-to-be Olympians, Nov recalled playing basketball and soccer on the same surface three decades ago while attending the adjacent high school. Nov knew nothing about baseball then – still doesn’t, he confessed – and said he would have considered the idea of Israel fielding a baseball team “far-fetched.”

Now, he said, “What else can you wish to bring your son to but [to meet] Olympic athletes if he’s into baseball?”

As to the boys’ desire to register to play on IAB teams, which would necessitate a one-hour, round-trip drive here from their home in Kiryat Tivon, Nov said, “I may have unintentionally released a genie.”