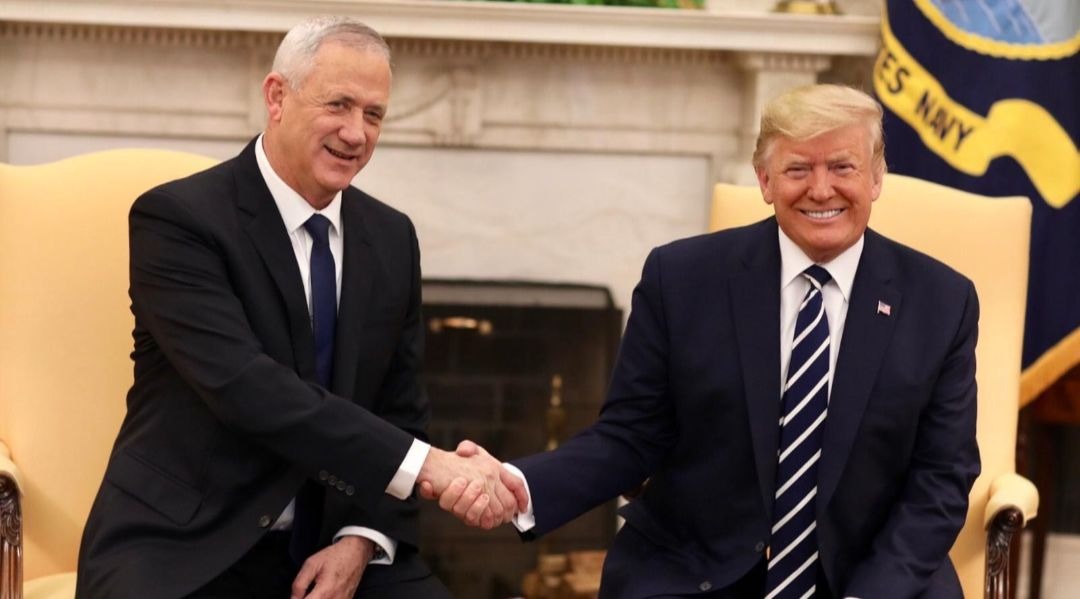 JERUSALEM (JTA) — The chief political threat to Benjamin Netanyahu’s reign as Israeli prime minister is on board with President Donald Trump’s peace plan.

The long-awaited proposal unveiled Tuesday “provides a strong, viable basis for advancing a peace accord with the Palestinians,” the center-right Blue and White coalition said in a statement.

The plan also preserves the existing arrangements between Israel and Jordan and Egypt, according to Blue and White, which is helmed by former military chief Benny Gantz, Netanyahu’s main rival in the March national elections. Gantz met with Trump on Monday in Washington, D.C., to be briefed on the plan ahead of its announcement.

The proposal, which Trump presented at a news conference with Netanyahu, would give Israel the Jordan Valley and parts of the West Bank while freezing for four years the areas that the U.S. proposes as part of a future Palestinian state. A Palestinian state would be made up of Gaza and the majority of the West Bank, which would be connected via high-speed rail, and have East Jerusalem as its capital.

Groups to the right and left of Blue and White weren’t as enthusiastic about the plan, however.

Naftali Bennett, head of the Yamina alliance of right-wing parties, called on Netanyahu to immediately apply sovereignty over all West Bank settlements and not to wait until a new election and a new government.

“When history knocks on the door, don’t tell it to come back after the election,” he said in a statement.

Bennett also said that the parties he represents “will not allow the Israeli government to recognize a Palestinian state under any circumstances.”  The plan calls for the ultimate establishment of a Palestinian state on about 80 percent of the West Bank.

Amir Peretz, head of the Labor-Gesher-Meretz coalition of left-wing parties, called for direct negotiations with the Palestinians to arrive at a peace deal.

“A political plan, revolutionary as it may be, cannot be implemented unilaterally,” he said. “President Trump should be thanked for his sincere intentions and after the election we should start direct negotiations with states in the region and the Palestinians.”

The terror group Hamas, which controls the Gaza Strip, said Palestinians in Gaza and the West Bank “must unite to fight the occupation,” both politically and on the ground.

He also said: “Jerusalem is not for sale. All of our rights are not for sale or bartering.”

Following the announcement of the plan, Palestinian demonstrations broke out Tuesday night in the West Bank and Gaza.

Meanwhile, the Arab League announced that it would hold a meeting on Saturday to discuss the plan.

Also Tuesday, the Israeli army reinforced its troops stationed in parts of the West Bank.

“The American administration’s plan branded as the ‘Deal of the Century’ is more like Swiss cheese, with the cheese being offered to the Israelis and the holes to the Palestinians,” the group said, adding that the proposal “legitimizes, entrenches and even expands the scope of Israel’s human rights abuses, perpetuated now for over 52 years.”

Moshe Maoz, research fellow at Hebrew University’s Harry S. Truman Institute for Peace, said most Jewish Israelis would welcome the plan,”particularly Prime Minister Benjamin Netanyahu, who hopes that this would help him to do away with his indictments.” But, he added, “for most or perhaps all Arabs in Israel, the West Bank and the region, the plan is a nonstarter and humiliating.

He said the plan could ignite demonstrations and riots in the West Bank and the region, and damage Israel’s relations with Jordan, Egypt and other Muslim states.