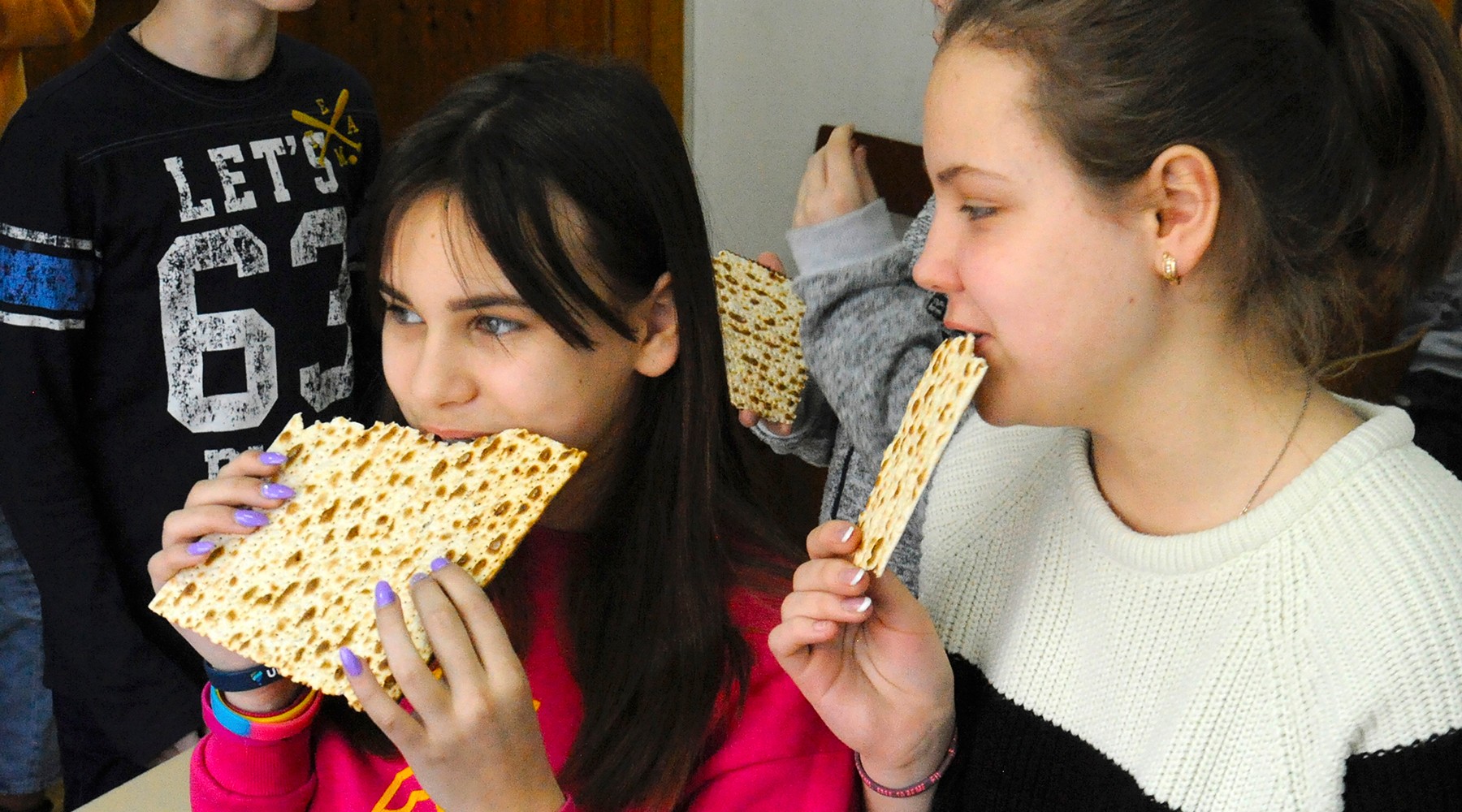 “What do you think a Jew looks like?” asks Arina Andriuschenko, standing at the blackboard with a piece of chalk in her hand.

As the students offer responses, Arina draws their description: a stick figure of an Orthodox Jew with a huge nose and sidelocks playing the violin.

The other Jewish visitor, Nikita Bivol, passes around a blue-and-white kippah for the kids to try on. He also has a menorah to help explain the holiday of Hanukkah and some matzah, which he passes around for tasting.

After finishing their presentation, Nikita and Arina invite the students to ask questions.

“Why did Hitler hate the Jews so much?” asks Linda Papoulidu, a 13-year-old in a pink sweater. Her classmate, Xenia Godoroja, inquires why Jews love money.

“Well, the Jews didn’t have their own country, so they had to move from one country to another, and they weren’t allowed to get regular jobs, so they went into business,” Nikita replies. “Anyway, that’s just an old stereotype.”

Nikita and Arina are volunteers for a program called Likrat Moldova, which brings together Jewish and Christian Moldovan teenagers in an effort to to dispel the negative and sometimes insidious myths about Jews that have permeated Moldovan society for centuries.

In this city associated with the infamous Kishinev Massacre of 1903 — in which 49 Jews were viciously murdered on Easter Day amid cries of “Kill the Jews!” — young Jews now are trying to use friendly classroom dialogue to counter anti-Semitic prejudices and stereotypes. (Chisinau is also known by its Russian name, Kishinev.)

Nikita, a tall 10th-grader, and Arina, a first-year journalism student at a local university, are among the corps of “Likratinos” – volunteer Jewish youths who for the past two years or so have been going from school to school to speak with Moldovan young people about Jews.

To date, the program has trained 86 students from the two Jewish high schools in Chisinau and held class encounters for more than 800 non-Jewish students at eight public schools throughout the city.

“It’s a great idea,” said teacher Maya Soboleva, who is not Jewish, as she observed her classroom’s show-and-tell from a chair in the back row. “Here in Moldova, there are lots of stereotypes about Jews and Judaism.

“Children need to know the truth — not from movies or books, but from real life. It’s good that other kids are doing this in an atmosphere of fun and learning rather than adults lecturing to them.”

Moldova, a former Soviet republic with 3 million inhabitants wedged between Ukraine and Romania, is home to an estimated 11,000 to 15,000 Jews. About half live in Chisinau, where there are four synagogues, two Jewish schools and a Jewish cultural center.

At its peak, the Jewish community of Bessarabia, as this part of Eastern Europe is known, numbered between 250,000 and 400,000. Tens of thousands left after bloody pogroms in 1903 and 1905, but it wasn’t until the Nazi onslaught that the Jews left en masse. Two-thirds of Bessarabia’s Jews fled when the Soviets retreated in 1941 ahead of the Nazi invasion. Most of those who remained – over 100,000 — were murdered by the Nazis or local collaborators. 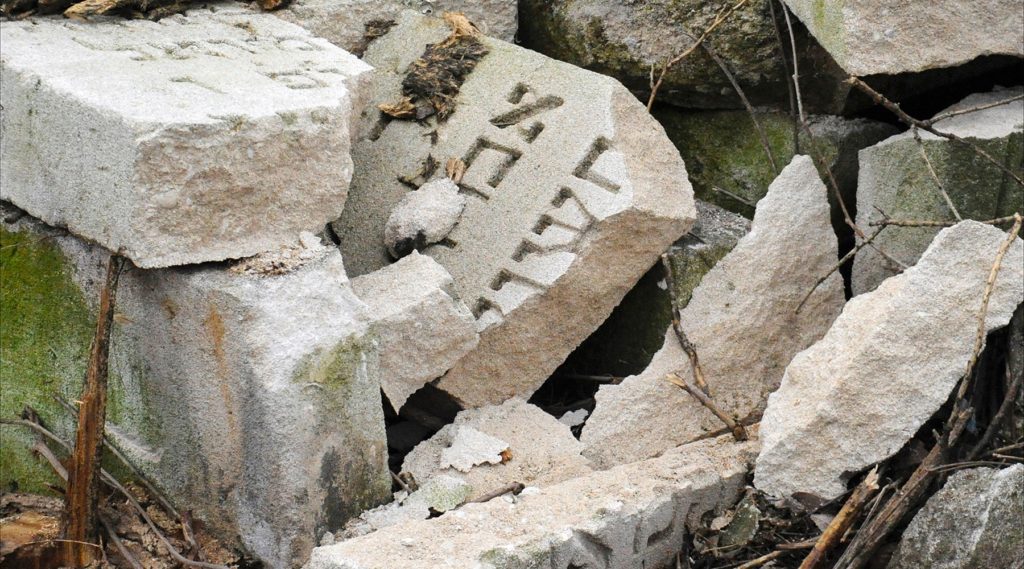 The Jewish community recovered a bit after the war, peaking at 98,000 in 1970, according to the Soviet census of that year. The Soviet Union’s 1991 collapse and subsequent economic chaos triggered the exodus of most of those who remained.

About 1,430 Moldovans have immigrated to Israel in the last eight years, according to the Jewish Agency. Israel’s most famous Moldovan immigrant is Yisrael Beiteinu leader Avigdor Liberman, who was born in Chisinau in 1958 and immigrated to Israel with his family in 1978.

“We cannot say there is no anti-Semitism. It just takes different forms now,” said Shimshon Daniel Izakson, senior rabbi of the Moldovan Jewish community. “The pogrom of 1903 started with the mass media — an article in a local newspaper claiming that a 14-year-old Christian boy was killed by Jews to use his blood to make matzah. Now it’s social networks and the internet, negative comments on anti-Semitic websites and teenagers making video clips while vandalizing Jewish gravestones.”

In the city’s largest Jewish cemetery, thousands of tombstones, many of them broken or toppled, stretch across a field. Some have been vandalized, but most appear to have fallen victim to simple neglect. Not far away, a local Mercedes-Benz dealership encroaches upon the hallowed grounds of Chisinau’s main Holocaust memorial.

A strip club sits across from the derelict shell of the city’s once-great Tzirilson yeshiva and synagogue, built in an eclectic Baroque style and named after the famous chief rabbi of Bessarabia, Yehuda Leib Tzirilson. In 2010, the Jewish community paid $650,000 to buy the site and begin restoration work. Plans call for construction of a synagogue, yeshiva, mikvah and kosher restaurant, but property disputes have delayed any construction.

Last August, the community celebrated the reopening of a synagogue in a building seized by Soviet authorities 80 years ago. Called the Wooden Synagogue or the Lemnaria Synagogue, it sits in the cellar of Chisinau’s Jewish community center. The project was funded from Alexander Bilinkis, president of the Organization of Jewish Communities in Moldova, along with businessmen Alex Weinstein and Emmanuil Grinshpun.

“We need to rebuild religious life in Moldova, and we need good education for our children,” Bilinkis said.

While Bilinkis praised Moldova’s parliament for passing a landmark bill condemning anti-Semitism in 2017 and allocating state funds toward a planned Jewish museum in the capital city, he lamented the government’s failure to restitute Jewish properties.

“Before World War II, the Jewish community owned many properties,” he said. “After the Soviet Union collapsed, the Orthodox Church got all its properties back from the government, but not the Jews.”

For now, Moldova’s biggest problem is the economy. It’s one of the poorest countries in Europe. It also has struggled with separatists in the breakaway republic of Transnistria, home to about 450,000 people. Only a handful of Jews are said to live there. 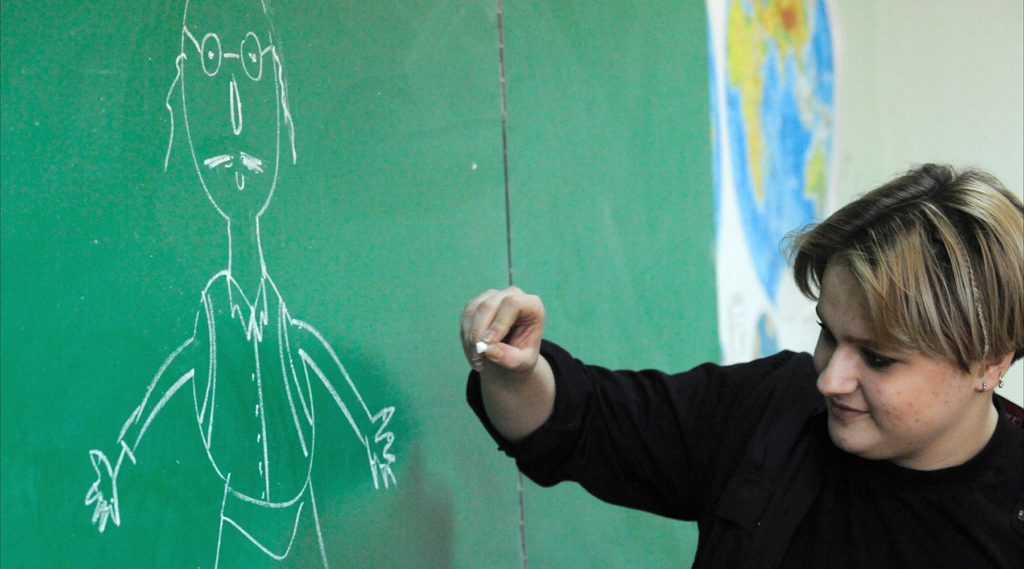 Arina Andriuschenk draws a caricature of an Orthodox Jew on the blackboard of a classroom of non-Jewish students in Chisinau as part of a Jewish teen-driven project to combat anti-Semitism. (Larry Luxner)

Last summer, a wave of anti-Semitism swept through Moldovan social media after an Israeli-born Moldovan Jewish businessman, Ilan Shor, who had been sentenced to more than seven years in prison for his role in the country’s largest-ever bank fraud, fled the country. Shor had been out of prison pending an appeal of his 2017 conviction for a $1 billion embezzlement scheme.

Known locally both for his corruption conviction and philanthropic largesse, Shor ran successfully for mayor of the city of Orehi in 2015 and for the national parliament in February 2019. Detractors dismissed his political campaigns as bids to avoid prison time. After he disappeared from the country last summer, many figured he had fled to Israel, which has no extradition agreement with Moldova.

“Those who have negative attitudes and are anti-Semitic will find a way to blame us,” said Julia Sheinman, director of the Jewish Community of Moldova. “But it’s not the majority. Most people are tolerant.”

The student-run program to counter anti-Semitism among young people, Likrat Moldova, is sponsored by LivingStones Association, a nonprofit group founded in 2016 and based in Zurich. LivingStones is run by Yvette Merzbacher, a Peru-born Jewish philanthropist who traces her roots to Bessarabia. The Likrat model had begun in Switzerland in 2002 and later was expanded to Austria and Germany.

Merzbacher had to make some significant adaptations for the idea to work in Moldova. For one thing, first she had to teach Moldovan Jews about their own Jewish heritage.

“Young Moldovan Jews know very little about Judaism, their roots, their history or anything about the Holocaust,” Merzbacher said in an interview. “Through seminars, workshops, day trips and Jewish heritage tours, we teach them how to build up their Jewish identity. We form them as future Jewish leaders to contribute to their community and teach them public speaking and soft skills so they can break up misunderstandings and old resentments through dialogue.”

The program also trains volunteers to defend Israel, with tips on how to respond when someone speaks negatively about the country or tries to delegitimize it. Among their trainers have been guest speakers from the local Israeli Embassy, the director of the Israeli Cultural Center in Chisinau and representatives of the Jewish Agency.

“It’s up to us to educate the young generation to find out about their roots, inspire them to enjoy Jewish, culture and give them the strength to be proud of their identity and stand up for the Jews and Israel,” Merzbacher said.

On Jan. 26, the LivingStones Association inaugurated a Holocaust monument in the Moldovan town of Bratuseni. The monument commemorates the July 1941 murder of 326 local Jews by Nazis, Romanian troops and local collaborators, and is located along the route where thousands of Jews marched from the ghetto in Edinets to camps in Transnistria. Most died of hunger, typhus and exhaustion along the way.

As Likrat Moldova scales up its activities in Chisinau, the Likratinos are now meeting twice a month for training sessions. Some 40 classroom encounters are planned for 2020.

“Before deciding to participate in this project, I met a lot of people who had no idea what Jews are, and those people had many stereotypes,” volunteer Nikita Bivol said. “I joined this project in order to break those stereotypes.”

Emma Sorich, 16, said she signed on as a volunteer because she wants to learn more about her own Jewish background.

“I have relatives living in Israel, and I want to study more about the culture and traditions of the Jewish people,” she said. “In the future, I want to be able to explain this to my children.”