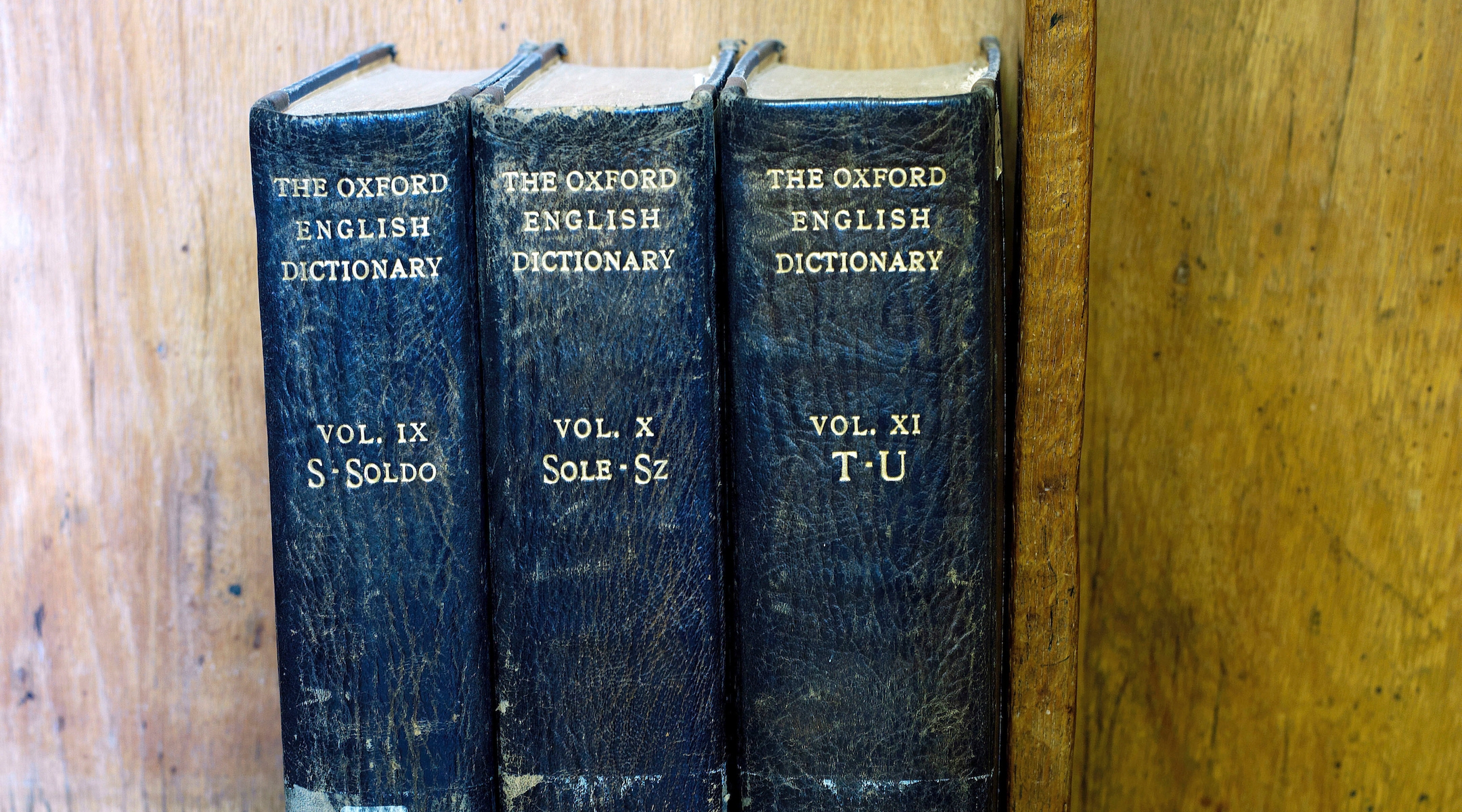 (JTA) — It’s not just “yiddo.” The Oxford English Dictionary has just added a slew of Jewish-themed and Yiddish terms, some of which are sure to offend.

The venerable institution’s list of new entries for January 2020 contains dozens of items with Jewish content, from “bialy” to “Jewfro” to “yeshiva bochur.”

Responding to debate this week about the inclusion of yiddo, a term for fans of the British Tottenham Hotspurs soccer club that borrows from a derogatory term for Jewish people, the dictionary’s compilers said they judge proposed additions by their significance, not whether they offend.

“We reflect, rather than dictate, how language is used which means we include words which may be considered sensitive and derogatory. These are always labelled as such,” the OED said in a statement.

A few other new additions also tread potentially offensive ground, including a derogatory application of the word “bagel” referring to Jews that the dictionary says is used in South Africa. Most of the others run little risk of offending anyone (though some might object to the designation of a few terms, such as “kibitz,” as rare).

chrain [Yiddish], n.: “Horseradish; spec. a piquant sauce made with grated horseradish, vinegar, and (sometimes) beetroot, used as a condiment and traditionally served with…”

farbrengen, n.: “A Hasidic gathering, usually with eating, drinking, singing, and discussion of Hasidic teachings, held especially on the Sabbath and other festivals…”

futzing [Yiddish], n.: “Ineffectual or trifling activity; messing about; tinkering. Chiefly with around.”

glatt kosher, adj.: “Designating food prepared according to a strict interpretation of Jewish dietary law; of or relating to such food; strictly kosher.”

Jewdar, n.: “An ability, attributed esp. to Jewish people and likened humorously to radar, to identify a (fellow) Jewish person by intuition…”

Jewfro, n.: “A curly, frizzy, or bushy hairstyle worn by some Jewish people, reminiscent of an Afro.”

Jewish American, n. and adj.: “An American of Jewish origin or descent.”

Jew town, n.: “A name for: an area inhabited predominantly by Jewish people. In later use, esp. such an area within a larger urban environment…”

kvetching [Yiddish], adj.: “Characterized by complaining or criticizing; that complains or criticizes.”

kvetchy [Yiddish], adj.: “Given to or characterized by complaining or criticizing; ill-tempered, irritable.”

Shabbat goyah, n.: “In Jewish usage: a non-Jewish woman who performs for strictly Orthodox Jews tasks forbidden to them on the Sabbath (see Shabbat n.)…”

shaliach, n.: “An emissary or agent; a representative or proxy. Also (in Jewish worship): a person responsible for leading the communal worship of a synagogue; =…”

unterfirer, n.: “In Jewish usage: (at a Jewish wedding) a person who leads or accompanies the bride or groom to the chuppah (chuppah n.).

yiddo, n.: “A Jewish person. Also in extended use: a supporter of or player for Tottenham Hotspur Football Club.”

Hanukkah gelt in Hanukkah, n.: “money or (now chiefly) chocolate coins, traditionally given to children at the Jewish festival of Hanukkah and used as a stake when playing dreidel…”

Jew-free in Jew, n.: “characterized by the absence of Jewish people.”

Jewish calendar in Jewish, adj.: “a complex ancient calendar used in Judaism, typically to determine the date of religious festivals, holidays, etc., throughout the year.”

Jewish emancipation in Jewish, adj.: “the fact or process of ending legal discrimination against, and establishing equal rights for, Jewish people as national citizens.”

Jewish Enlightenment in Jewish, adj.: “a movement among central and eastern European Jews during the late 18th and 19th centuries, having as its object the modernization of Jews and…”

Jewish mother in Jewish, adj.: “used as the type of a person who is overprotective, overbearing, or interfering…”

Jewish New Year in Jewish, adj.: “the Jewish festival marking the start of the new year, celebrated on the first (and in the diaspora also the second) day of the month Tishri…”

Jewish penicillin in Jewish, adj.: “(a humorous name for) chicken soup, strongly associated with Jewish culture, and popularly considered as a remedy for all ailments…”

Jewish quarter in Jewish, adj.: “an area of a city or town inhabited mainly by, or traditionally associated with, Jewish people.”

Jewish question in Jewish, adj.: “(usually with the) a question or debate about the appropriate status, rights, and treatment of Jewish people within a nation state or in society…”

anti-Semite, adj. and n., sense A: “Characterized by prejudice, hostility, or discrimination towards Jewish people on religious, cultural, or ethnic grounds; anti-Semitic.”

bagel, n., sense 2b: “slang. South African (usually derogatory). A type of wealthy young Jewish man characterized as being spoilt and materialistic with a distinctively…”

gelt, n.2, Additions: “Money or (now chiefly) chocolate coins, traditionally given to children at the Jewish festival of Hanukkah and used as a stake when playing dreidel…”