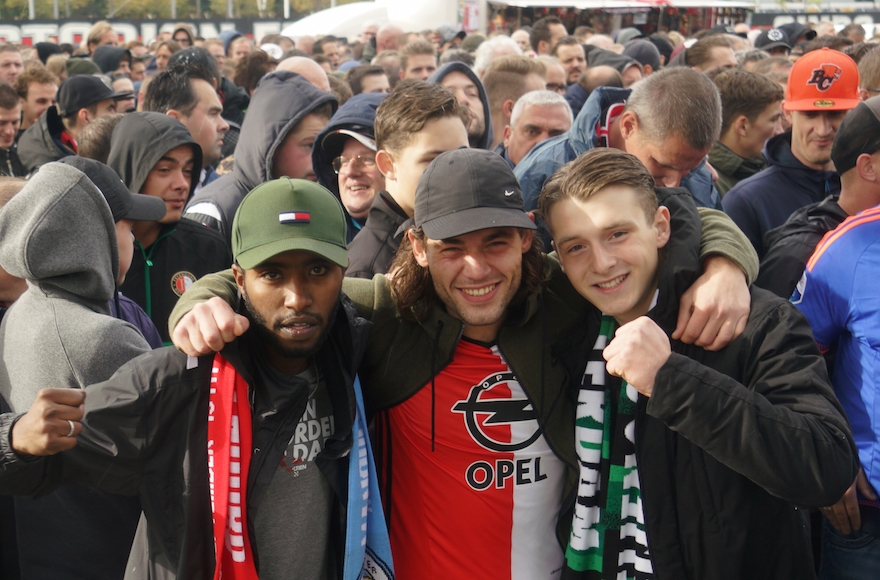 ROTTERDAM, Netherlands (JTA) — Seventeen-year-old Sjuul Deriet, standing outside this port city’s main soccer stadium on a rainy Sunday, vividly explains why he hates the people he calls “the Jews.”

“They have the money, they run the business from management positions and they think they’re better than blue-collar people like us,” said Deriet, who works at a catering business.

Yes, the statement sounds like typical anti-Semitic cliches. But it has nothing to do with actual Jews, Deriet hastened to tell JTA.

“I have nothing against your people. When I say I hate Jews, I just mean supporters of Ajax,” he said, referring to the Amsterdam soccer team that is an archrival of Deriet’s beloved Feyenoord Football Club of Rotterdam.

For the uninitiated: Fans of Ajax are often referred to as “the Jews,” likely because of the historical presence of Jews in the Dutch capital. As it happens, there are several soccer teams across Europe that are known as “Jewish” for similar reasons, including England’s Tottenham Hotspurs — they once had a strong fan base among the Jewish immigrants of North London — as well as Italy’s Roma and Germany’s Bayern Munich.

Both supporters and detractors often call the clubs Jewish, leading to some complicated situations. For example, it’s not uncommon at matches for fans of these teams to wave Israeli flags or shout their adoration for “the Jews.” At the same time, however, the detractors often display acrimonious hatred of “the Jews” — an uncomfortable situation that, depending on whom you ask, is either fed by or feeding anti-Semitism’s seeming comeback in Europe.

“Anti-Semitism in the stadiums has allowed the hate songs to gradually seep into society at large,” Manfred Gerstenfeld, a researcher of anti-Semitism and fellow at the Jerusalem Center for Public Affairs, wrote in a 2011 research paper titled “Antisemitism and the Dutch Soccer Fields.”

Gerstenfeld’s paper shows how the chant “Hamas, Jews to the gas” has moved in Holland from the soccer pitch to anti-Israel protests.

In the case of Ajax, its “Jewish” nickname dates to the 1970s. It has the Amsterdam locale, and the team has had several Jewish managers and players — notably the late Johnny Roeg and Daniël de Ridder — as Ajax archivist Wim Schoevaart told Israeli filmmaker Nirit Peled in 2012. Peled made a film,“Super Jews,” about the team’s Jewish ties.

Ajax also had many Jewish fans because — ahem — “they played well and Jews like to get good quality for their money,” added Schoevaart, who died in 2013 at the age of 94.

Supporters of England’s Hotspurs proudly call themselves “Yids.” Based in North London, where most of the city’s 250,000 Jews reside, the Tottenham club also earned its Jewish credentials because its three chairmen since 1982 have been Jews. 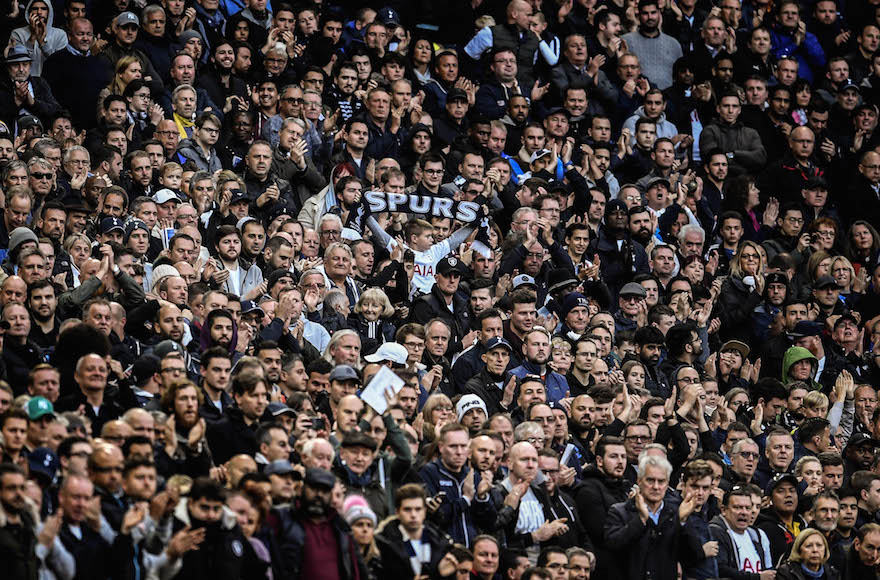 But nowhere is the Jewish affiliation stronger than among Ajax fans, who like the film call themselves “Super Jews.” They wave giant Israeli flags during matches, sing “Hava Nagila” in stadiums and wear Star of David pendants around their necks.

“Maybe it sounds silly, but it was a uniting element that brought fans together,” veteran Ajax fan Ronald Pieldoor told Peled. “They sing about it, they wear the symbols, so it seems that it’s part of the identity of some Ajax supporters.”

At the same time, however, this borrowing of Jewish symbols by non-Jews (or “Ajax Jews,” as hardcore supporters call themselves) is triggering some of the most explicit and provocative expressions of anti-Semitic speech seen on the continent.

On Twitter, ahead of Sunday’s match in Rotterdam — Ajax won, 4-1 — fans of the rival team widely shared a picture of two Lithuanian Jewish boys wearing yellow stars taken just before their murder by Nazi collaborators. Ridiculing their suffering, the picture was titled “Back when Amsterdam had only one star.”

Jewish organizations decried the tweet as a new low point in a long list of offensive jokes and acts, including Nazi salutes in stadiums and hissing sounds, a reference to gas chambers, made by rivals when Ajax comes on the pitch. One popular anti-Ajax banner reads “Adolf, here are another 11 for you” — a reference to the team’s 11 players.

While similar phenomena occur with  Tottenham and Roma, they are particularly loaded in the Netherlands, where Nazis and their collaborators murdered 75 percent of the country’s prewar Jewish population of 140,000 – the highest death rate in Nazi-occupied Western Europe.

Yet not everyone believes the chants are anti-Semitic, per se. To Pieldoor, the veteran Ajax fan, the offensive chants have nothing to do with Jews and everything to do with fans’ desire to provoke Ajax supporters.

“As police got better at keeping us apart, you could no longer have at it, you couldn’t throw bottles at each other, so the only recourse was verbal aggression,” Pieldoor said in the “Super Jews” documentary. Remarks that would be considered anti-Semitic in any other context are not necessarily so in soccer, he argued.

Soccer clubs and stadiums in the Netherlands and beyond have banned several fans for chanting insults and praises about Jews. Several court cases for incitement to racial hatred have been opened in recent years against fans who shouted anti-Semitic slogans at soccer matches.

But the nuances attached to the chants continue to be a source of some confusion in the European media. In January, the Dutch main public broadcaster, NOS, apologized to supporters of a soccer team from Utrecht for calling them anti-Semitic over their chanting that “the Jews are going to the slaughter” during a match against Ajax. In calling the chanting fans anti-Semitic, NOS “exaggerated and failed to set it in context,” a spokesman said.

And earlier this month Marca, the Spanish sports daily, apologized for an article in which it asserted — crassly but not inaccurately — that Tottenham is “hated by soccer fans because of the team’s Jewish origins.”

Back at the Feyenoord stadium, an elevated metal tunnel that used to lead from the train station to stadium stands as a silent reminder of the intensity of the hostility. Before they were banned from the stadium, Ajax fans would be led through the windowless tunnel into their cordoned-off section of the stadium.

“Ajax and Feyenoord have been at war for decades,” Feyenoord supporter Monti Ahmed, 22, told JTA. “It has nothing with Jews, they just kind of got dragged into it by Ajax supporters who started calling themselves Jewish.”

Unlike Ahmed, who believes Feyenoord fans should be allowed to shout whatever they wish, including about gas chambers, Feyenoord backer Hugo Mol said he wants to see some intervention.

“But it has to go both ways,” added Mol, a 21-year-old law student. “The Ajax fans call us Feyenoord fans ‘cockroaches’ in reference to how we survived the 1940 German bombings of Rotterdam. Sometimes they sing about bombing Rotterdam. But no one makes a fuss about that abuse of a war-related tragedy. So in a way, they are inviting this behavior by our fans.”

Ajax management recently banned the use of Israeli flags in its home stadium. And while the ban and a crackdown on fans offering anti-Semitic chants has helped reduce their prevalence, “Ajax fans find ways to wave Jewish symbols,” Naftaniel said, including flags of Maccabi, the Jewish sports organization.

“There needs to be zero tolerance for anti-Jewish chants in stadiums,” Naftaniel said. “But Ajax fans who adopt Jewish symbols are partly responsible for triggering this behavior.”