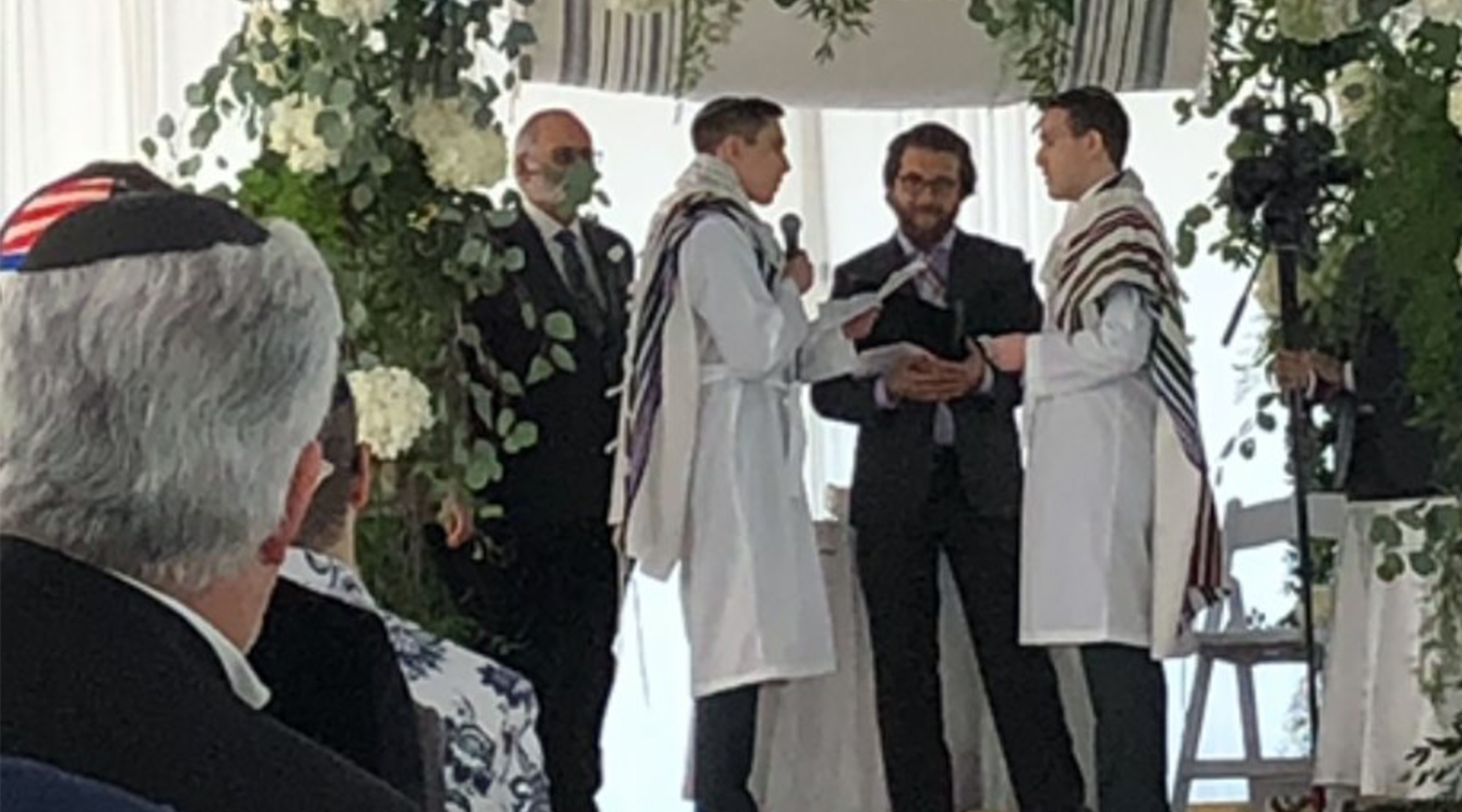 (JTA) — When Nadiv Schorer and Ariel Meiri were married on Sunday, the rabbi standing with them under the wedding canopy was breaking new ground, too.

For Avram Mlotek, a rabbi affiliated with a progressive wing of Orthodox Judaism, it was the first time he had performed a wedding for two people of the same sex.

“In many ways, it was like any other simcha I’ve officiated: joyous, Jewish, spiritual, full of love,” Mlotek wrote this week on Facebook. “What made it different was that they were two men who joined in sacred, covenantal relationship.”

Mlotek declared his intention to begin performing same-sex weddings last year, arguing in a Jewish Telegraphic Agency opinion piece that facilitating Jewish marriages for all kinds of families is a communal imperative.

“A wedding day should be a joyous day for loving companions, as liturgy connotes, regardless of their sexual orientation,” Mlotek wrote at the time. “If the couple is choosing to live Jewish lives, build a Jewish home and raise Jewish children, our traditional rabbinate must seize the opportunity to welcome and work with these families at their most precious life-cycle moments. If we don’t, we risk further alienation and falling into an abyss of religious irrelevance by denying these couples their rightful place of belonging.”

Same-sex marriages are permitted in most American Jewish denominations, but Mlotek’s decision placed him well outside the Orthodox mainstream, where same-sex marriage is both forbidden and, according to some analysts, among the reasons why Orthodox Jews have aligned themselves with the Republican Party.

Mlotek was ordained at Yeshivat Chovevei Torah, which was founded two decades ago to advance an “Open Orthodox” approach that emerged in part as a response to that rightward shift. The school has dropped the Open Orthodox affiliation, but rabbis trained there still tend to look for ways to include women and others while maintaining fidelity to Jewish law, known as halacha. (The school also denied ordination to a gay student last year in a move that Mlotek said influenced his decision.)

In keeping with that approach, and in keeping with a handful of other progressive Orthodox rabbis who have conducted same-sex weddings, Mlotek did not use the traditional wedding formula but another ceremony devised by a rabbi focused on LGBT inclusion in Orthodox communities.

Mlotek’s Facebook post and others about the ceremony drew some comments from people who lamented what they said was a departure from traditional Jewish values. But it also elicited praise from others who said that Orthodox Judaism too often fails to grapple with the human costs of halachic fidelity.

“We should listen & learn from G-d fearing Yidden crying & tossing and turning as they struggle to get clarity because we are sisters/brothers and can always humbly learn from each other,” Shmuly Yanklowitz, another rabbi trained at Yeshivat Chovevei Torah, wrote on Facebook. “But we must silence from our souls the homophobic forces who shed no tears and hold little empathy in their hearts.”