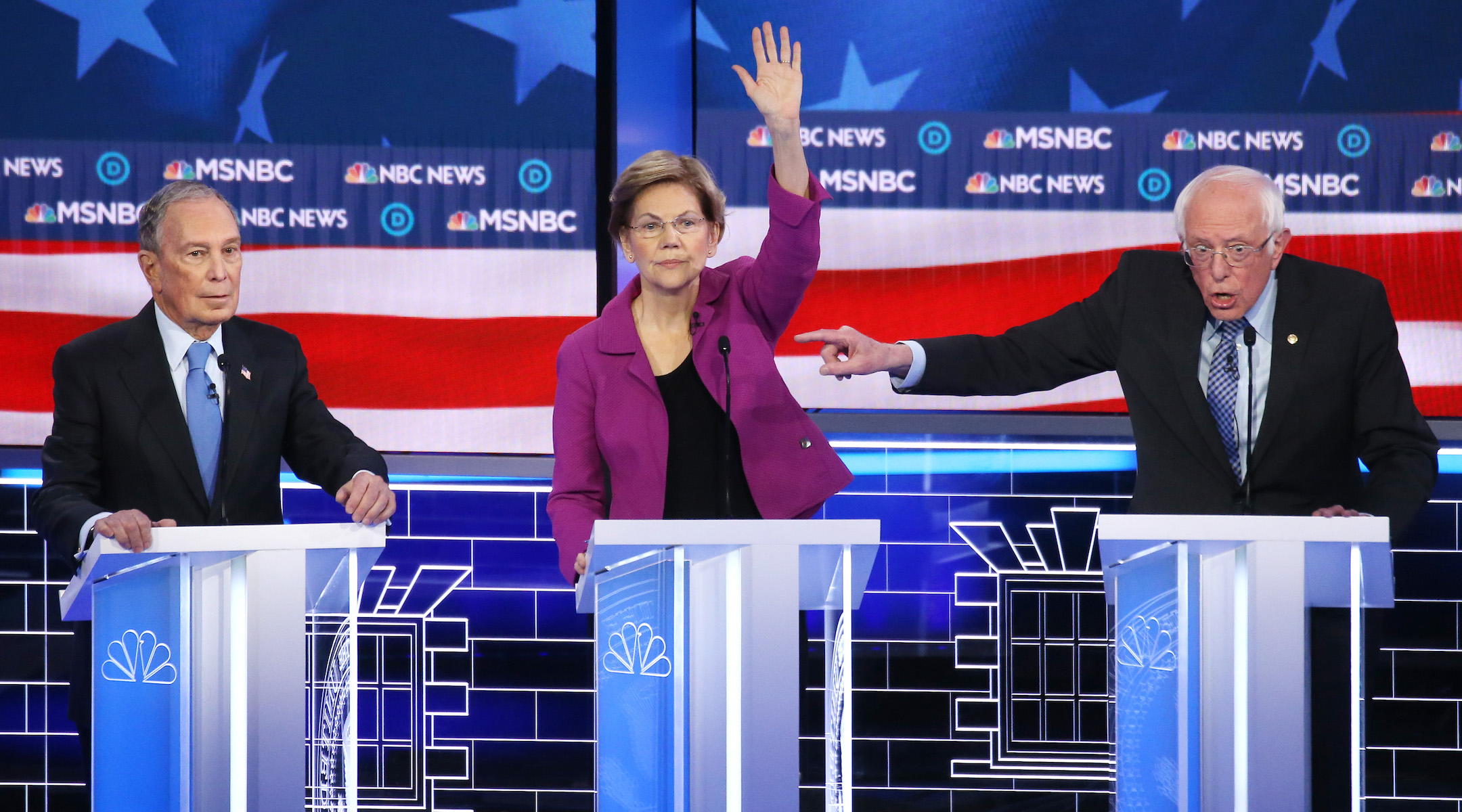 Mike Bloomberg, left, was under attack from Elizabeth Warren, Bernie Sanders and the other Democratic presidential candidates at the Nevada debate in Las Vegas, Feb. 19, 2020 in Las Vegas, Nevada. (Mario Tama/Getty Images)
Advertisement

(JTA) — It was a rough welcome for Mike Bloomberg.

The one-time Republican took a beating Wednesday night from the five other candidates on the Democratic debate stage in Las Vegas, who took aim at the former New York City mayor’s record on policing, treatment of women and support for workers.

The onslaught against Bloomberg comes as polls show his presidential campaign making significant inroads among American voters. Unclear is whether Bloomberg’s tough night will stunt his climb — and short-circuit the emerging matchup of two clear Jewish front-runners.

The attacks began just seconds into the debate, when Elizabeth Warren likened Bloomberg to President Donald Trump, and continued unabated for two straight hours. At one point Chuck Todd, one of the moderators, even asked him, “Mr. Bloomberg, should you exist?”

That question was inspired by Bernie Sanders’ proposition that there should be no billionaires, and Bloomberg’s answer was clear.

Bloomberg sounded less confident in other moments, such as when he rebuffed calls to let people who have sued him share their stories publicly.

Bloomberg’s 10-week-old campaign has yielded significant support in national polls, sometimes landing him second to Sanders, the other 78-year-old Jewish grandfather in the race. But it has also elicited critical coverage of his track record as a businessman, New York City mayor and philanthropist.

His competitors had clearly studied the criticism, lodging 45 attacks on Bloomberg, according to NBC News’ “Attack Tracker.” That was more than twice the number of attacks made on Sanders, the second-most attacked candidate.

In addition to criticizing Bloomberg’s treatment of women, Warren also challenged his apology for stop-and-frisk policing in New York City. She said Bloomberg had apologized for the outcome of the policy, not its design.

“If you want to issue a real apology, then the apology has to start with the intent of the plan as it was put together,” Warren said. “You need a different apology here, Mr. Mayor.”

And Joe Biden, the former vice president who like Bloomberg is aiming to appeal to centrist voters who do not identify with Sanders’ vision for democratic socialism, joined Warren in calling on Bloomberg to release those who have sued him from non-disclosure agreements that bar them from discussing their experiences publicly.

Bloomberg rejected the demand, as he has in the past, saying that the agreements would stand and adding, “None of them accuse me of anything other than maybe they didn’t like a joke I told.”

Then Biden stepped in.

“You think the women, in fact, were ready to say, ‘I don’t want anybody to know about what you did to me?’ That’s not how it works,” he said. “The way it works is they say, ‘Look, this is what you did to me,’ and the mayor comes along and his attorneys say, ‘I will give you this amount of money if you promise you’ll never say anything.’ That’s how it works.”

Amy Klobuchar criticized Bloomberg for not yet releasing last year’s tax returns, eliciting one of the night’s more quotable lines from the businessman: “I can’t use TurboTax.” Bloomberg said he would release his taxes once his complicated return is complete.

Pete Buttigieg, the former mayor of South Bend, Indiana, pointed out that Bloomberg — and Sanders — have not historically been affiliated with the Democratic Party.

And Sanders and Bloomberg sparred over their competing visions for the country’s economic system.

After listening to Sanders outline his vision for democratic socialism, in which all Americans have what the Vermont senator has called “economic rights,” Bloomberg said, “We’re not going to throw out capitalism. We tried that. Other countries tried that. It was called communism, and it just didn’t work.”

The debate was light on foreign policy, meaning that one major issue important to many Jewish voters — Israel — did not come up (except when Klobuchar, eager to prove her foreign policy knowledge after an embarrassing gaffe this week, said she had learned that the Knesset, Israel’s governing body, has 120 members).

Voters will get another chance to hear from the candidates in less than a week, when they debate in advance of the South Carolina primary Feb. 29. That contest will be the last before Bloomberg begins to appear on primary ballots.

Bloomberg’s robust campaign operations and essentially limitless funds mean that a single difficult night is unlikely to destabilize his push for the presidency. The candidate embraced that dynamic in his closing comments Wednesday night.

“You can join me at MikeBloomberg.com, too,” he said, nodding to his competitors’ requests for donations. “But I’m not asking for any money.”