Hundreds of Russian-speaking Jews gather in Vienna for unique festival 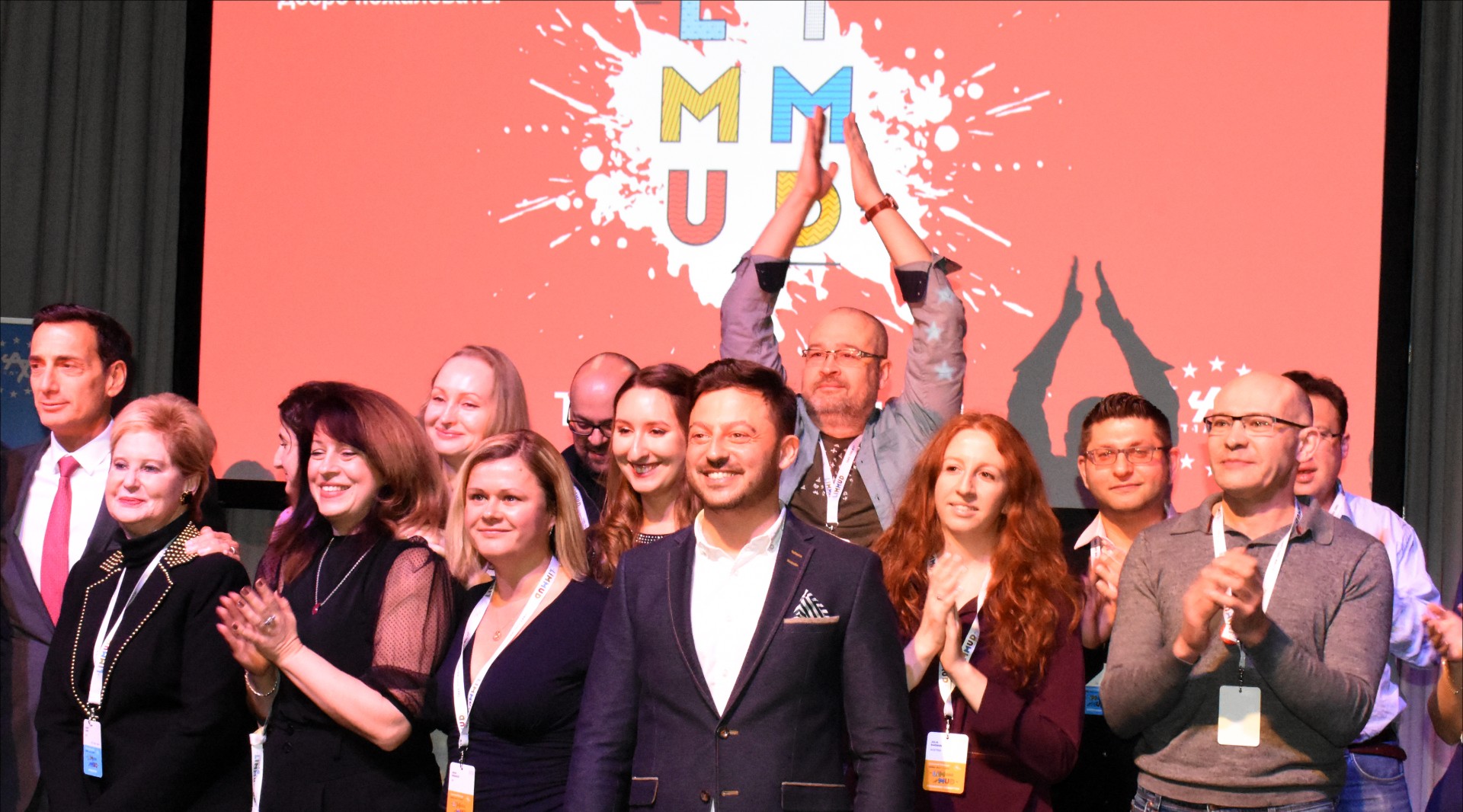 It was all part of last weekend’s Limmud FSU Europe conference in Vienna, which drew a crowd of more than 600 Russian-speaking Jewish participants from at least 25 countries. They converged on the Austrian capital for three days of Jewish learning, culture, camaraderie and, of course, food.

The Feb. 28-March 1 event was followed with a special commemoration event at Austria’s Mauthausen concentration camp to mark the 75th anniversary of its 1945 liberation by U.S. forces. The ceremony included Racheli Kreisberg, granddaughter of camp survivor and famed Nazi hunter Simon Wiesenthal.

“Our second event in Western Europe — and our very first in Vienna — is a significant milestone for Limmud FSU,” said the organization’s president, Aaron Frenkel. “We are grateful for all the support we’ve received from the Austrian government, the Jewish community and our partners, and we’re glad to see that the efforts of our volunteers were extremely successful.”

Limmud conferences are sprawling, pluralistic Jewish festivals run entirely by local volunteers that take place in communities throughout the world. Limmud FSU was started a decade and a half ago specifically to serve Russian-speaking Jewish communities worldwide.

For many, the main draw of the event was the unique sense of community surrounding Limmud FSU.

Among those who helped put the extravaganza together was Dimitri Mevzos, a project management team member who was born in Uzbekistan, moved to Israel in 1990 and eventually relocated to Britain.

“This is a space where everyone can express themselves in their native Russian,” said Mevzos, 47 and a father of two. “I’m a very social kind of person, but before this I was never active in any Jewish organizations. I only went to synagogue once a year, on Yom Kippur.”

Another project management team member, Linor Kiknadze, a native of Kazakhstan, made aliyah at age 14 and now lives in London with her Israeli partner. She joined Limmud FSU in 2015 because at the time there was hardly any Russian Jewish community in London to speak of.

“There were Russian-speaking Jews. Some of them knew each other, some didn’t,” said Kiknadze, 38, an economic researcher. “In Israel, I did everything I could to fit in and considered myself an Israeli. But when I came to the UK, I realized I was missing a sense of community In London. A lot of Russian-speaking Jews don’t feel a part of the British Jewish community at all. Therefore it felt right to me, as I’ve rediscovered the Russian-Jewish part of my identity.”

“Limmud doesn’t pressure you to become more religious or make aliyah. You are surrounded by people like you — sharing similar background and values,” she said. “People see us as a second home. They bring their parents, children and even grandchildren.” 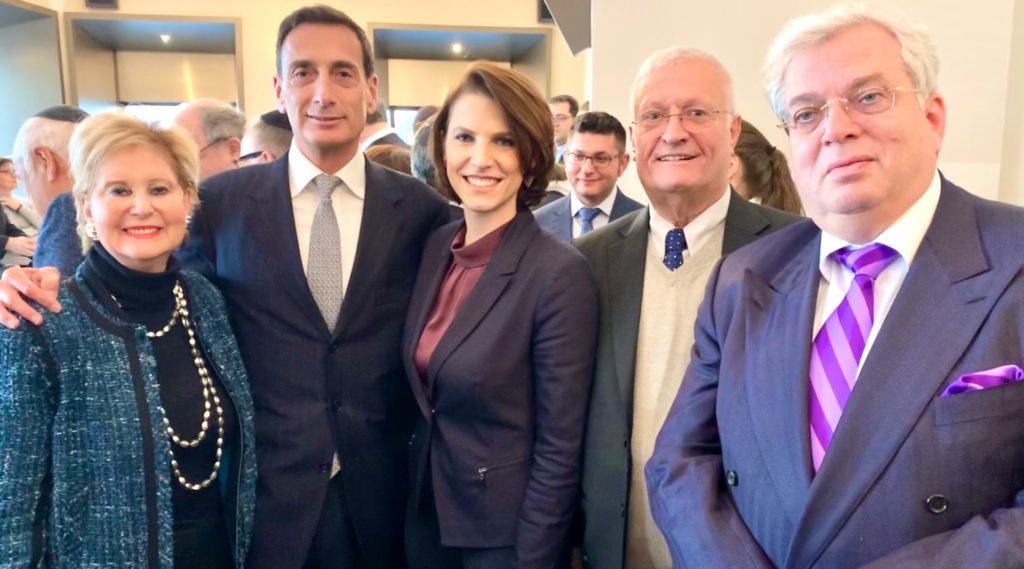 Businessman and philanthropist Matthew Bronfman, chairman of Limmud FSU’s steering committee, helped kick off the organization in 2006 after founder Chaim Chesler approached him with the idea. A state of disconnect often exists in large Jewish communities between Russian-speaking Jews and the local, established community, Bronfman noted.

“The thrust of our organization is to spark somebody’s Jewish journey after 70 years of communism and no Jewish education — through music, politics, dance and Torah,” Bronfman said. “Whether you’re religious or secular, Limmud FSU is here for everybody.”

Almost 15 years since the organization’s founding, thousands of young, Russian-speaking Jews are involved from places as disparate as Australia, Toronto, the U.S. West Coast and Moscow. Part of what makes the group unique among Jewish organizations is that it’s completely volunteer-driven, except for a small team of paid staff members.

Elmira Tarivierdiieva, 27, lives in Berlin and is Limmud FSU’s “ambassador” in Germany — where a wave of some 170,000 Russian-speaking Jewish immigrants arrived after the Soviet Union’s collapse in the early 1990s.

A Ukrainian from Odessa, Tarivierdiieva said she appreciates Limmud FSU because it provides a middle ground between the ultra-Orthodox or completely secular Jews with whom she grew up.

“Limmud is an alternative in a world where Jewish communities sometimes don’t talk to each other,” Tarivierdiieva said. “ I think these conferences give the Russian speakers back a sense of pride in their Judaism. 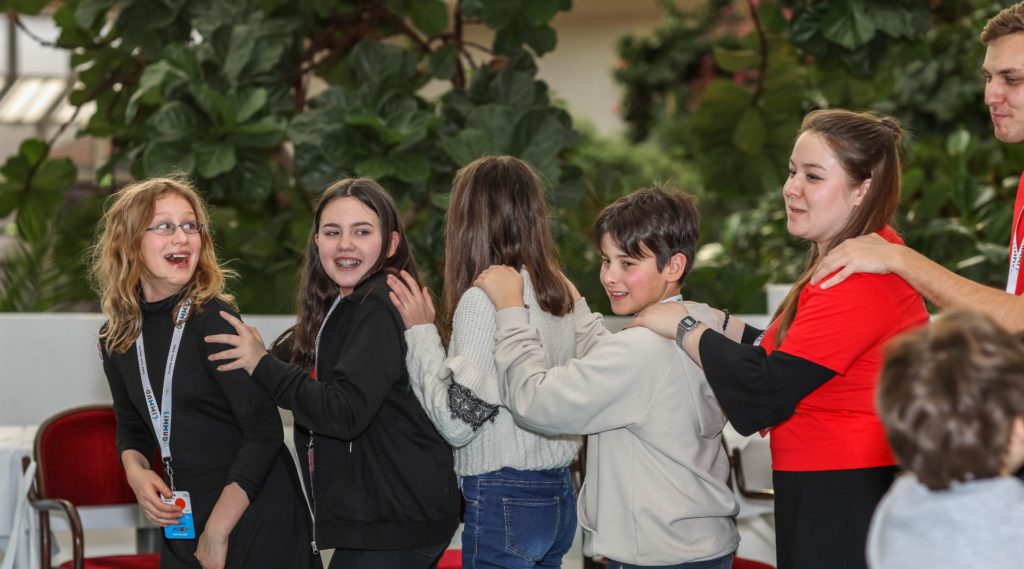 Children who attended the Limmud FSU festival in Vienna got a chance for organized play. (Courtesy Limmud FSU)

“What impressed me the most when I joined was seeing so many different kinds of Jews in one room, celebrating Shabbat together. No one asks you from which side you’re Jewish. No one judges you by how you look.”

At a gala event on Saturday night, participants also heard from Karoline Edtstadler, Austria’s fiercely pro-Israel federal minister for EU and constitutional affairs. In a brief speech, Edtstadler strongly condemned the recent spate of anti-Semitic attacks in Germany and vowed that her conservative government, led by Chancellor Sebastian Kurz, would vociferously oppose the BDS movement – the effort to use boycotts, divestment and sanctions to isolate the Jewish state.

“The inspiring success of Limmud FSU Europe Vienna is yet another testament to the resurgent dynamism of the global community of Russian-speaking Jews, who are rising — in Europe, in America, in Israel and the former Soviet Union — to reclaim their identity and legacy and to fully become a part of the Jewish world,” he said.

Sandy Cahn, who co-founded Limmud FSU in 2006 with Chesler, said the group is now active in nine countries and has touched the lives of 65,000 young people — mostly those in the 25-40 age bracket.

“We feel they’re the next generation of leadership in the Jewish community,” Cahn said. “We are pluralistic, Orthodox, Conservative and Reform. We filled a void. Nobody’s judged at Limmud — no matter how religious you are, how much you know, if you just light candles on Shabbat, or even if you don’t.”