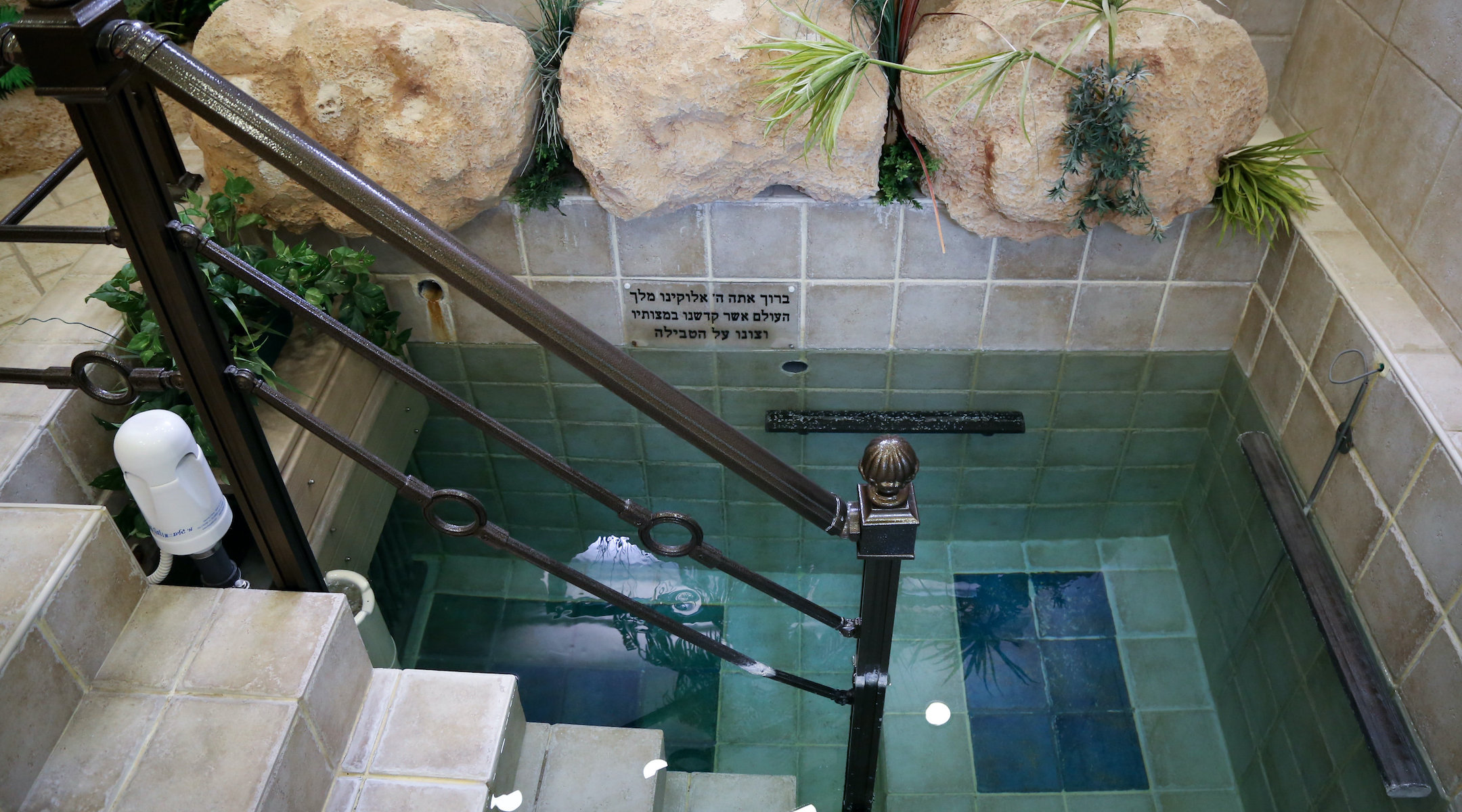 Women's mikvahs in Israel, like this one in the settlement of Alon Shvut, are still open. (Gershon Elinson/Flash90)
Advertisement

NEW YORK (JTA) — When the rabbis of New Jersey’s suburban Bergen County took the bold step of shutting down almost all facets of communal Jewish life last week, they left the doors of one institution open: the women’s mikvah, or ritual bath.

That pattern has been repeated in place after place this week as the Jewish world has responded to the coronavirus epidemic. In multiple communities in the United States and across Israel, women’s mikvahs have stayed open even after synagogues, schools and even men’s baths have closed.

Found in virtually every significant Jewish community in the world, mikvahs enable Jewish women who observe religious law to resume physical relations with their husbands following the completion of their menstrual cycle. For Jews who observe the laws of mikvah most scrupulously, closing the women’s baths could mean not only no sex, but no hugging or touching their spouses in any way for the foreseeable future — an extreme privation and technical challenge for families stuck at home together.

“To be stuck here in the midst of a global pandemic, where there’s a lot of people dying and it’s emotionally challenging, and to not be able to have human contact is something that my husband and I are very much dreading,” said one 24-year-old Jerusalem woman who declined to give her name.

Women familiar with mikvahs say that with some minor adjustments, the baths meet all the requirements for a safe environment. But at a time when nearly all public spaces are temporarily closing, the continued operation of the baths raises questions.

“It would be safe to say that most epidemiologists would suggest that if there was a way to have an opportunity to put a stay on this type of activity until this epidemic has passed, that would be prudent,” said Dr. Ted Cohen, an epidemiologist at Yale University’s School of Health.

A decision Thursday by the Village of Kiryas Joel, a Hasidic enclave an hour north of Manhattan, may hint at what’s to come. The town announced a complete lockdown, including its ritual bathhouses, to stop the coronavirus’ spread.

Erin Piatetsky, the board president of a mikvah in the Washington, D.C., area, said that although the facility is staying open, board members are “extremely concerned” about the spread of COVID-19.

“We are all wondering when will the time come when perhaps we will have to [close],” she said. “We think that hasn’t come yet. We’ve been constantly putting in stricter and stricter cleaning precautions and checking precautions.”

Jewish women’s ritual immersion has distancing built into the process. Typically a woman goes in the water only in the presence of an attendant who checks that her immersion is done in accordance with Jewish law, which requires women to be clean and unadorned when they submerge themselves. That means that women who visit the mikvah face a lower risk of disease transmission than those who attend services in a synagogue crowded with other worshippers.

“You’re talking about one person immersing and one volunteer,” said Carrie Bornstein, the executive director of Mayyim Hayyim, a community ritual bath in Newton, Massachusetts, which has closed its education and art centers but kept open its mikvah.

Mayyim Hayyim has ramped up its disinfecting of public areas, treats the water regularly with a sanitizing agent, and is replacing pumices and other supplies for each visitor. Visitors must schedule their visits in advance and now prepare at home. And attendants responsible for making sure that women have met the Jewish legal requirements for immersion now do so from a distance.

“We’re also having people stay distant from each other when they are in the mikvah so it’s a much more controlled and contained environment,” Bornstein said.

The Eden Center, a Jerusalem-based group that works to educate women about mikvah usage, wants all mikvahs to adopt similar regulations. Its director, Naomi Grumet, said she thinks closing the baths would be a last resort for the Israeli government.

“It’s part of the way of life of many, many people here, and I think in deference to that, the government officials will certainly want to try to keep it open as long as possible,” Grumet said. “That’s part of keeping a healthy and stress-free environment.”

Nishmat, an Orthodox women’s seminary in Jerusalem, has published guidelines with safety measures for mikvahs.

“This is a critical part of Jewish practice, and assuming all of the rules of social distancing and disinfection are kept, according to the health professionals with whom we have consulted, a visit to the mikvah should not pose any extra health risk,” said Atara Eis, the director the North American branch of the seminary’s program to train women in the laws of mikvah usage. 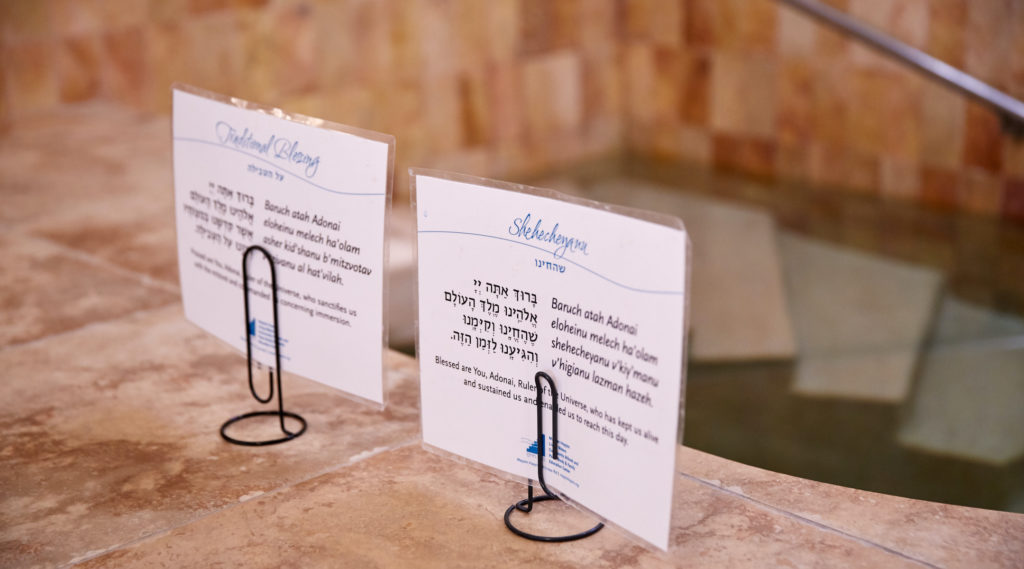 Mayyim Hayyim in Newton, Mass., is staying open but has instituted stricter guidelines to reduce the risk of coronavirus transmission. (Courtesy of Mayyim Hayyim)

Rabbi Lila Kagedan, a graduate of the Orthodox women’s seminary Yeshivat Maharat who has a background in bioethics, said she has provided guidance to some 50 mikvahs since the outbreak of the coronavirus.

“This is really a rapidly evolving situation, so guidelines are going to evolve over time, but in the here and now there is certainly a move to keep mikvahs open and operational with restrictions,” she said.

The closure of mikvahs would pose a challenge to many traditionally observant couples, according to Rabbi Dov Linzer, the head of Yeshivat Chovevei Torah, a Modern Orthodox rabbinical school, but not one that is insurmountable. While Jewish law calls for new communities to build the mikvah before a synagogue, many women have historically been unable to visit ritual baths because of where they live or their particular medical needs.

“The stress that this can bring to the marriage and the human difficulty that this means, I don’t mean to in any way minimize that, but it is important to realize that we’re talking about a few months and people have managed,” Linzer said.

Jewish law offers other options. Natural bodies of water, including lakes and oceans, can be used as a mikvah. Private pools can in some cases serve as mikvahs, and in fact Rabbi Moshe Feinstein, a prominent American Orthodox rabbi, helped construct such a pool for a community he served in Belarus in the 1920s.

But especially in the early days of spring, natural mikvahs might be dangerously cold. And few people have access to swimming pools at this time, unless they have a private one. Because Jewish law requires a mikvah to have a certain volume and be connected to a well of naturally occurring water to be kosher, not all pools would qualify.

Linzer added that he thought the coronavirus pandemic might result in some flexibility.

“I would not be surprised that if this goes on for awhile and the mikvahs are shut, that there will be rabbis who will come out with that ruling,” he said.

“That’s an area that I think some rabbis will consider,” Linzer said. “This doesn’t totally solve the problem, but it might solve it partly.”

The 24-year-old woman in Jerusalem says that regular touch — like “a comforting pat on the back” — concerns her more than sexual intimacy.

“Sex is not even the point, but just about the comfort and closeness that touch can give when you’re feeling alone and scared,” she said.

Peninah Feldman’s mind is also on closure — and how it would affect her home life. The 29-year-old doctoral student, who lives with her husband in Highland Park, New Jersey, has already considered alternate scenarios, including going to a secluded area at a nearby lake or beach if her local mikvah closes.

“It’s not like it’s the end of the world,” she said. “But so much of the way I’m hoping to keep myself sane in the course of this process is to make things as normal as possible. It would be such a big disruption to have that part of our lives inaccessible.”