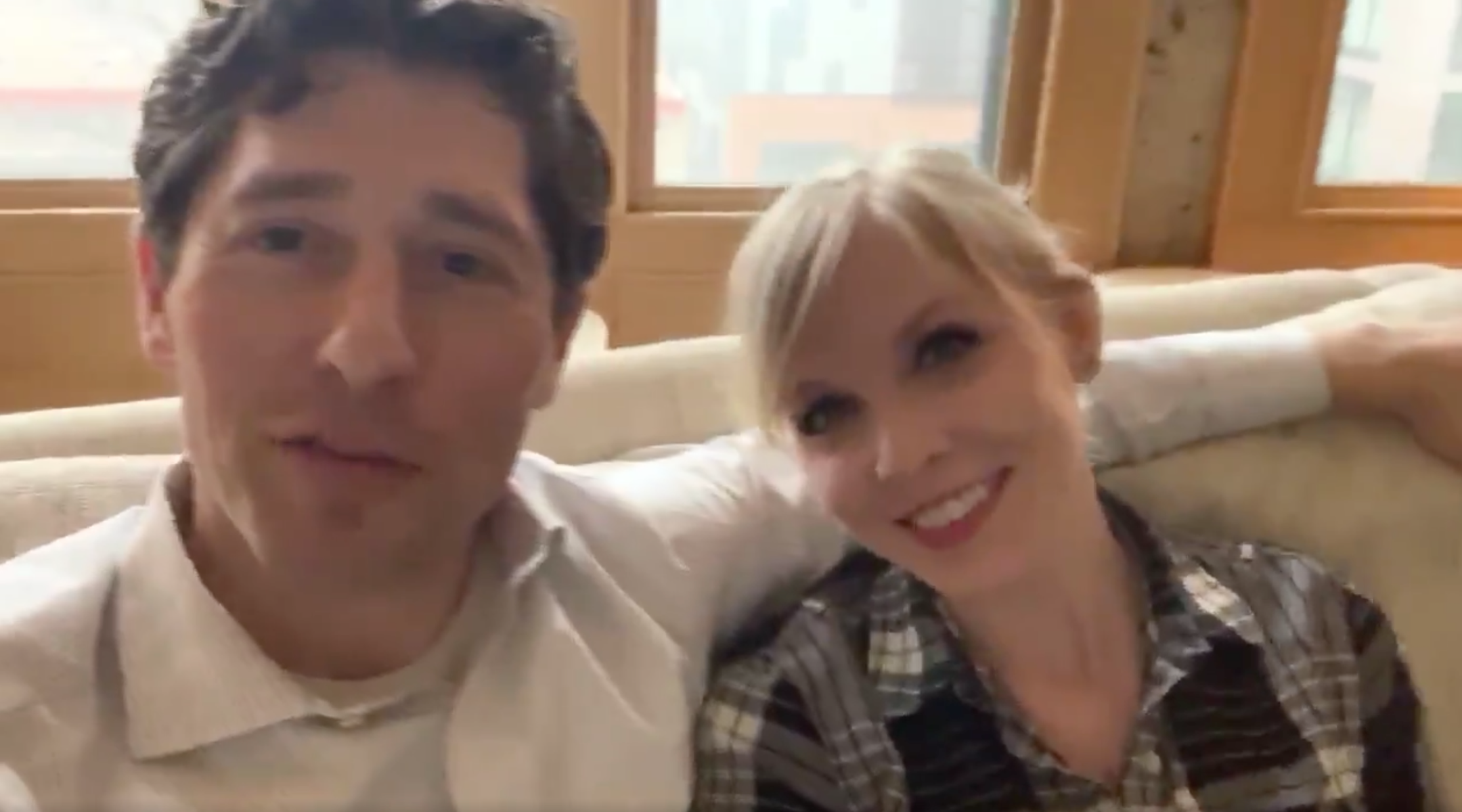 Minneapolis Mayor Jacob Frey and his wife Sarah Clarke are going to be parents. (Screen from Twitter)
Advertisement

(JTA) — After a week in which the headlines seemed to grow more grim by the day, it’s worth remembering that even as cities go dark across the globe, the world continues to turn. Babies are born, people are getting married, and thankfully the sun still rises every morning.

As we wind down a work week unlike any we’ve experienced before, here are three Jewish stories of hope and joy to take you into the weekend.

Alana and Yisroel got married

They’re not the only Jewish couple to get married in the midst of a pandemic, but few photos capture just how surreal this moment feels for many of us as this one of Alana Cooper and Yisroel Ygbi, who were married Thursday afternoon in Brooklyn outside the headquarters of the Chabad Hasidic movement at 770 Eastern Parkway. 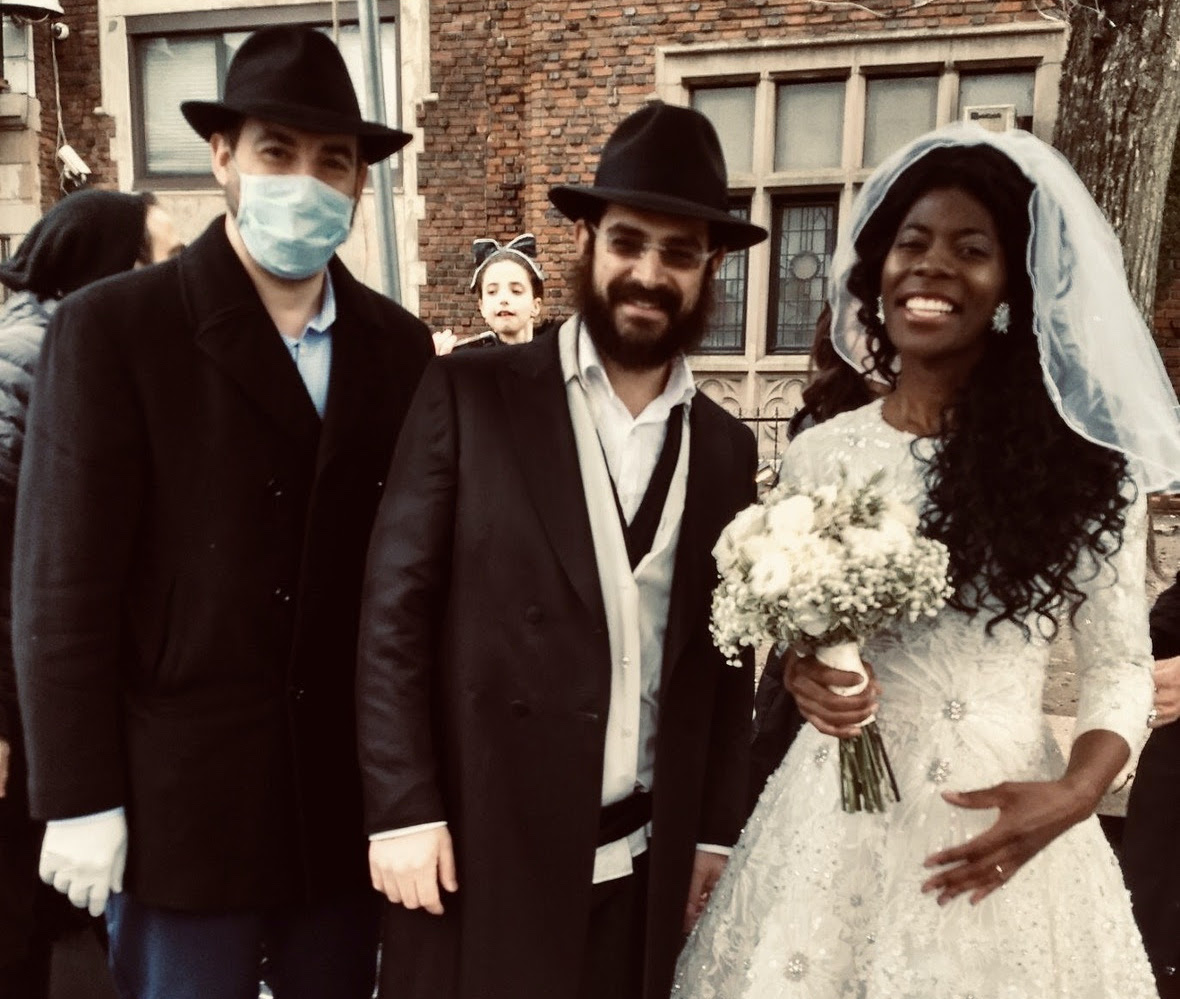 Alana Cooper and her husband, Yisroel Ygbi, center, at their wedding in Brooklyn. (Courtesy of Rabbi Ari Kirschenbaum)

Presided over by Rabbi Ari Kirschenbaum, the director of the Chabad center in the Prospect Heights neighborhood, the wedding was as makeshift as they come, with passersby recruited to participate in key parts of the service.

“Nothing was ordinary but everything was extraordinary,” Kirschenbaum wrote in an email Friday.

Cooper and Ygbi weren’t even the only Jewish couple to get married in the neighborhood this week. One couple that couldn’t have guests at their wedding drove through the streets in a convertible while people cheered for them.

As couple got married today in Crown Heights. Because no one could come to their wedding, they instead drove around the neighborhood and asked everyone to sing and dance with them from their homes. pic.twitter.com/MdwOys4MyI

Jacob Frey and his wife are expecting

Minneapolis Mayor Jacob Frey — known in some quarters as the nation’s foremost Jewish political sex symbol (watch out Bernie Sanders) — announced that he and his wife Sarah Clarke are expecting a baby in September.

Is there an appropriate way to announce a pregnancy during a global pandemic? Probably not, but @Jacob_Frey & I are happy to share this news with you all. pic.twitter.com/ZWL2sfxju4

“Hey everyone,” Frey said in a short video posted on Twitter. “I figured that you’ve gotten enough talk on coronavirus lately.”

It doesn’t even matter that Frey appeared not to know what to call an ultrasound. Presumably, he’s got other issues on his plate. Like many major cities, Minneapolis remains under a state of emergency.

“We are super excited,” Frey said in the video. And so are we. Mazel tov, Jacob and Sarah.

Lawrence Garbuz, the attorney at the center of the coronavirus outbreak in New Rochelle, New York, emerged from a coma on Wednesday.

Garbuz was patient zero for the coronavirus in New York, the common denominator among 37 early confirmed cases of the disease in the state. The Young Israel of New Rochelle synagogue, which Garbuz attended, was forced to close after his diagnosis. A one-mile containment zone was set up around the synagogue.

As the crisis intensified, Garbuz was placed into a medically induced coma from which he emerged on Wednesday. He “is awake and alert and seems to be on the road to full recovery,” his wife, Adina, said in a post on Facebook.