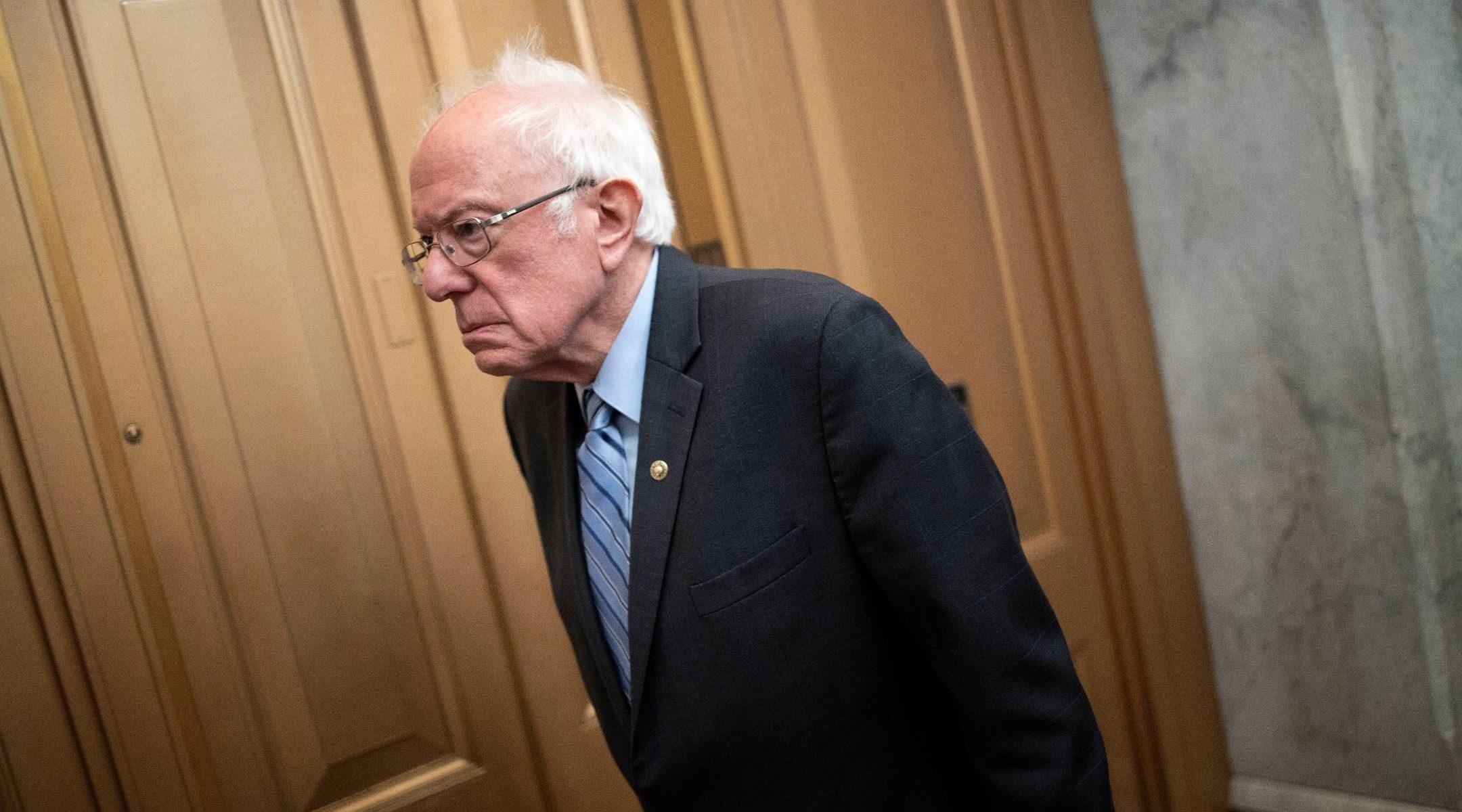 Sen. Bernie Sanders, shown in March 2020, said the coronavirus accelerated his departure from a race that he cannot win. (Win McNamee/Getty Images)
Advertisement

WASHINGTON (JTA) — Bernie Sanders, the Vermont senator who became the first Jewish front-runner in a major party nomination race for president, is suspending his campaign.

In a message Wednesday to his followers, Sanders said the priority was ousting President Donald Trump, and he said he would campaign for Joe Biden, the former vice president and senator from Delaware who is now the presumptive nominee. He said the coronavirus pandemic accelerated his decision.

“As I see the crisis ripping apart the nation exacerbated by a president unwilling or unable to mount any kind of leadership … I cannot in good conscience mount a campaign that cannot win,” the senator said from his home in Vermont, where he is quarantining because of the coronavirus. “Today I congratulate Joe Biden, a very decent man who I will work with to move our ideas forward.”

Saying his progressive agenda advocating Medicare for all and greater economic parity had effectively won the battle of ideas, Sanders noted that he won pluralities of voters under 35 even in states where he lost the primary.

For a period early in the primaries, Sanders led a field that had been whittled down to about half a dozen candidates. Biden overtook Sanders on Super Tuesday, March 3, when 14 states voted, and Sanders has not been able to make up the difference.

An early April departure is a marked change from 2016, when Sanders did not suspend until well into the summer, although Hillary Clinton was the clear front-runner. Sanders made history that election by becoming the first Jewish candidate to win major-party nominating contests.

Sanders and Biden are closer than Sanders was with Clinton and have spoken often during the campaign. Additionally, Sanders in 2016, like many other Democrats, was operating under the assumption that Donald Trump, the Republican nominee, could not win. This time, however, there is greater pressure on Democrats to get their act together early to defeat Trump in November.

Sanders cited an environment of “racism, homophobia, xenophobia and religious bigotry” as a critical reason to unseat the president.

Sanders ran an aggressive Jewish campaign this time, blasting videos with Jewish messages over social media. Notably the messages were aimed not only at Jewish voters, but at others who might have been attracted to Sanders’ message of a more inclusive polity.

Sanders made it clear he wants to influence Biden in advancing health care reform and greater economic parity at a time when the coronavirus is afflicting hundreds of thousands of Americans and has upended the economy.

He was especially scathing about claims that employees prefer employer-paid health care insurance, which was a key Biden claim. Sanders did not name Biden — a number of other Democrats have made the argument — but he said the pandemic rendered the argument “absurd.”

“This current horrific crisis that we are now in has exposed for all to see how absurd our current employer-based system is,” Sanders said. With unemployment rolls exploding, “It has led to millions of Americans losing their insurance.”

Sanders urged his followers to continue voting in primaries to gain greater leverage at the convention in August.

“While vice president Biden will be the nominee, we must continue to gather as many delegates as possible at the party convention, where will be able to exert influence over the platform,” he said. “And then standing united, we will go forward to defeat Donald Trump.”