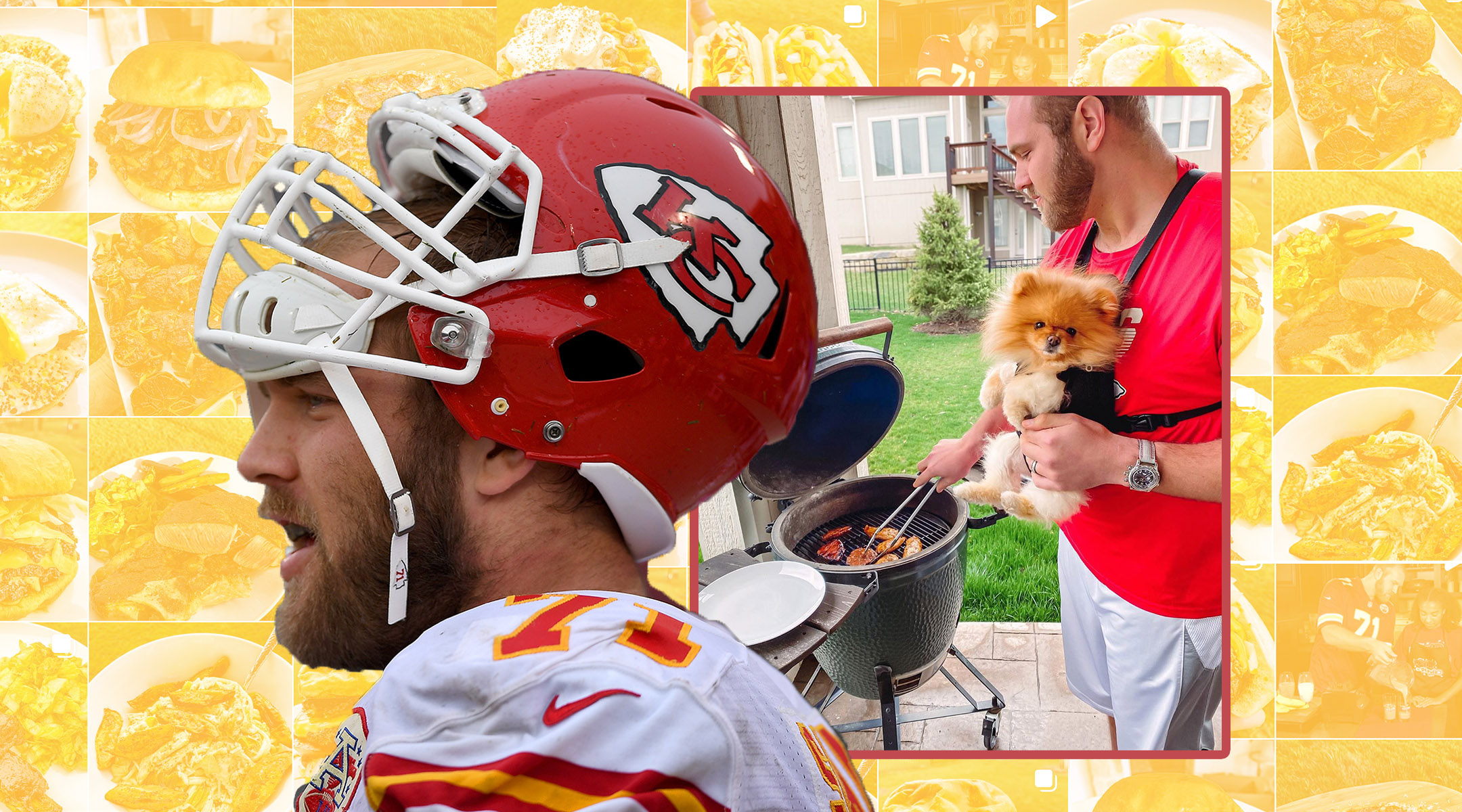 (JTA) — Fresh off his Super Bowl win in February, Kansas City Chiefs lineman Mitchell Schwartz took a vacation with his wife, Brooke, to St. Lucia. Little did they know that when they returned, they would be spending the next few months holed up at home because of the coronavirus pandemic.

So Schwartz, 30, has turned to what he loves maybe more than football: cooking.

Posting to his 79,000 Instagram followers using the hashtag #ChefSchwartz, the Jewish athlete has shared photos of many of his favorite recipes — from waffles with homemade whipped cream to bone-in ribeye to chicken nachos.

He has essentially pivoted from one of the best offensive linemen in the NFL, a Pro Bowler, to a full-on food blogger.

Hanging out with my guy @cupcake.the.pom grilling up some fajita meat 🥩 🍗🐶 #ChefSchwartz

Schwartz is not a total stranger to being a food influencer, however.

In 2016, along with his brother Geoff, also a former NFL lineman, he wrote the cookbook “Eat My Schwartz: Our Story of NFL Football, Food, Family, and Faith.” They tell stories about their upbringing, being the first Jewish brothers in the NFL since 1923 and their favorite Jewish traditions.

Schwartz shares that the Seder is one of his favorites, and how he wishes it would “occur during the [football] season” so he could host a Passover meal for his teammates.

But the bulk of “Eat My Schwartz” is food content with recipes by the brothers.

Cooking has always been a passion for Schwartz, starting when he was a teen. He explained in 2018 that he “transitioned from watching cartoons and sports — I still watch sports — into watching a lot of Food Network and Cooking Channel, and finding a way to feed myself.”

Outside of his social media, Schwartz has a food blog — called Mitch in the Kitch, obviously — where he posts his recipes and instructions. He responds to fans who comment and is genuinely enthusiastic about his subject. Here’s his brisket pot roast from last week: 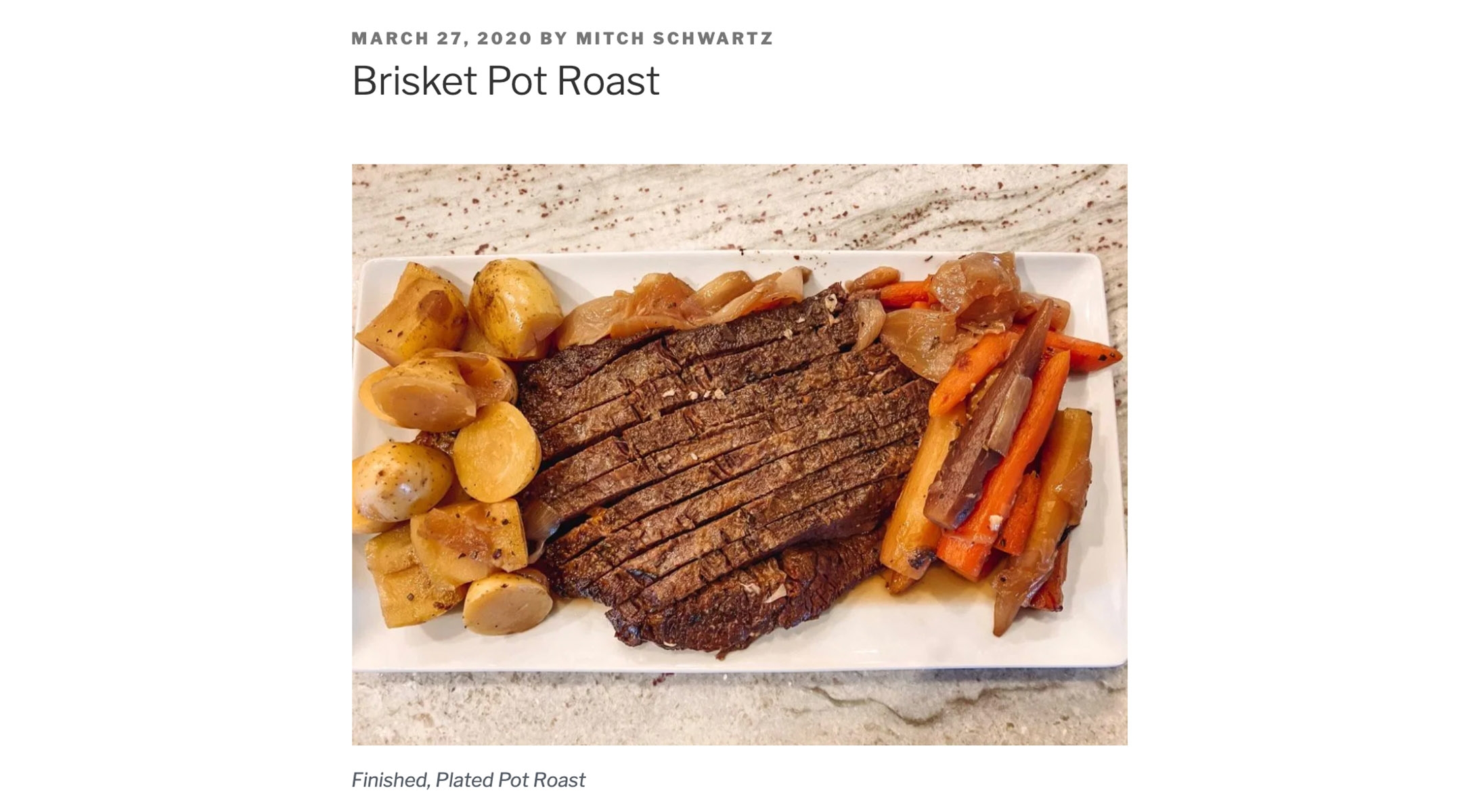 He started Mitch in the Kitch as a way to express his passion for cooking, but also to connect with fans.

“They obviously have an interest in how you play, but they’re also interested in what you’re doing in your personal life, and they want to get to know you better,” Schwartz told The Athletic. “Typically, in most households, someone is cooking a meal, whether it’s once a week or every night. Everyone has a vested interest in good food, so it’s just a fun way to interact with people and to reach out. The response has been great.”

In typical offseasons, Schwartz hosts his teammates for a meal that he cooks — there are never any leftovers.

“It gets a little toasty, but that’s the fun of cooking. Whether it’s my wife and making her a good meal or cooking for friends and family, you’re doing something where you can make other people happy. It’s definitely a good feeling,” Schwartz said.

On Twitter, he also answers questions from fans about food and offers words of encouragement for others that are trying his recipes:

There’s no wrong way. I’m not the best at timing up chicken so I like to thinly slice breast meat and just cook hot and fast. Gets a great crust and I know it’s cooked without hassle. https://t.co/Q6Gn4SaUQj

Depends on how I’m feeling. Some form of an egg scramble with veggies and maybe turkey, bacon on the side, toasted bread or english muffin (buttered and salted of course), maybe some potatoes if they aren’t too oily and fatty. https://t.co/Gh4dmlaFJI

His advice for those trying to cook for the first time during quarantine?

“I mean, no one’s going to be too disappointed. You can always order a pizza if you need to at the end of the day!”