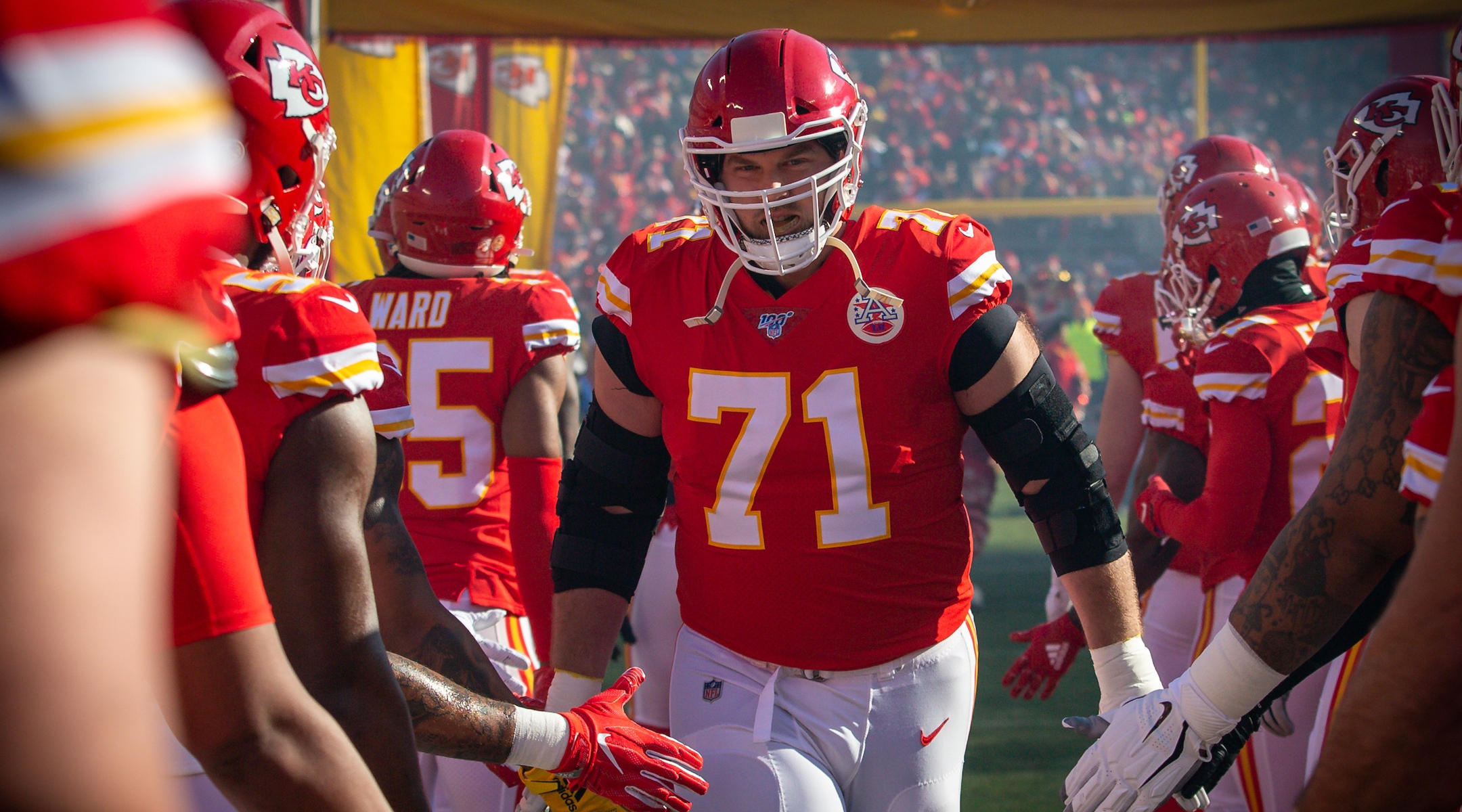 (JTA) — Kansas City Chiefs lineman Mitchell Schwartz does more than start for perhaps the best offense in the NFL. The 6-5, 320-pound tackle is a star at his position and has been for much of his eight-year career since turning pro following a standout career at the University of California, Berkeley.

Powered by an attack led by the dynamic quarterback Patrick Mahomes, the Chiefs will be making their first Super Bowl appearance since 1970 on Sunday against the San Francisco 49ers.

It didn’t take long for reporters covering the Super Bowl to note his Jewishness. On Monday, known as the Super Bowl’s Media Day, Schwartz was asked about being “a Jewish guy starting on the offensive line in the Super Bowl.” (Bear in mind, questions by the horde of reporters on Media Day can be, shall we say, offbeat.)

The Southern California native isn’t shy about expressing his Jewishness, either. Schwartz and his brother, Geoff, who was also an offensive lineman in the NFL, wrote a book in 2016 about football and their lives growing up titled “Eat My Schwartz: Our Story of NFL Football, Food, Family, and Faith.” They were the first Jewish brothers to play pro football since Ralph and Arnold Horween in 1923.

“Once we heard the stat, we realized just how rare this really is,” Mitch told the Jewish Telegraphic Agency in 2016. “So we both thought it was important to share our story — for Jewish kids, and in general, about how we both wound up where we are.”

The brothers attended a Conservative congregation in their native West Los Angeles. In fact, Schwartz didn’t start playing football until the ninth grade in part because his parents — Olivia Goodkin, an attorney, and Lee Schwartz, a business consultant — didn’t want the game to interfere with his bar mitzvah preparation.

“I started out worrying that they were going to get hurt — but then I realized it was the other players I should be worrying about,” Goodkin said in the book, as the boys were over 6 feet by then. “They were like trucks hitting small cars. And I started to kind of feel like maybe this was their destiny.”

Speaking about his sons playing pro football, dad told the Jewish Journal in 2012, prior to Mitch getting drafted, “I just kvell.”

Since then, Schwartz has played four seasons in Kansas City, earning All-Pro honors in each after signing a five-year, $33 million free agent contract. Schwartz, a second-round draft pick of the Cleveland Browns, has started all 112 games as a pro and hasn’t missed a snap, according to the Chiefs website — the best current streak of consecutive snaps in the NFL.

Two former Jewish 49ers no doubt will be pretty proud, too, to see their team back in the Super Bowl for the first time since 1994. Harris Barton, an All-Pro offensive lineman who played from 1987 to 1998, was a key member of three Super Bowl-winning teams. Barton is a member of the National Jewish Sports Hall of Fame and the International Jewish Sports Hall of Fame.

John Frank, a tight end for five seasons in the 1980s, played on two Super Bowl winners before quitting the game to become a physician.