At this Dutch Jewish nursing home, family visitors can be lifted by cranes to see their loved ones safely 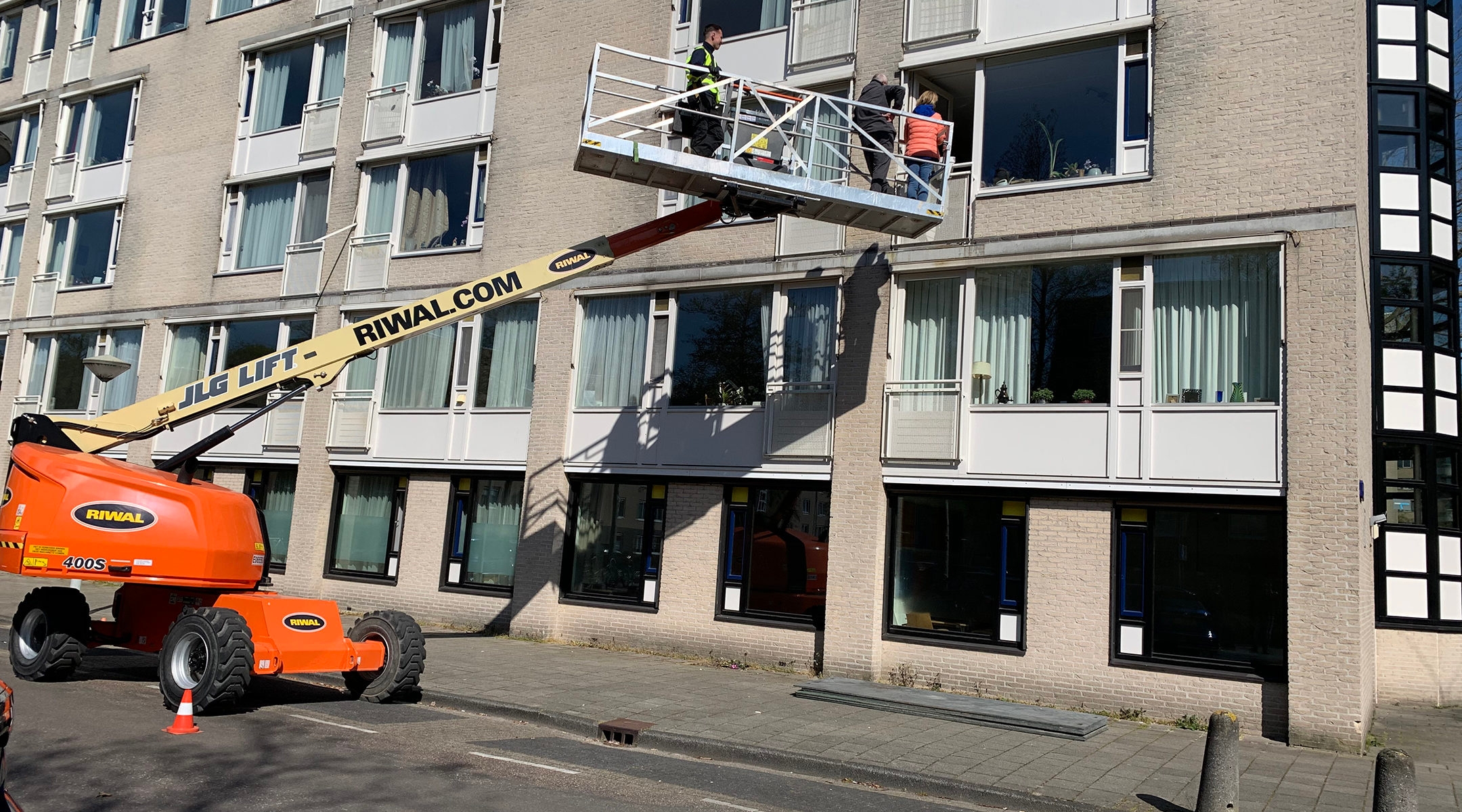 Relatives of Fiet Aussen get ready to meet her from a crane outside the window of her Jewish nursing home in Amsterdam, April 15, 2020. (Courtesy of Riwal Holding Group)
Advertisement

AMSTERDAM (JTA) — Video calls weren’t really cutting it for Fiet Aussen, a 91-year-old widow who has spent the past six weeks in lockdown at this city’s Jewish nursing home.

Nearly deaf, she isn’t really able to use that technology to communicate with family members, who have been unable to visit her at Beth Shalom since it closed its doors in the middle of March because of the coronavirus. COVID-19 has killed 26 of its residents.

So her grandson, Timo Haaker, 26, decided to enlist a different kind of machinery.

He called Riwal, a Netherlands-based international company that specializes in crane machines, to inquire about renting one to lift Aussen’s relatives up to the window of her third-story apartment, the NIW Dutch-Jewish weekly reported Friday.

Riwal, which is owned by the Israeli-Dutch businessman Doron Livnat, lifted 12 of Aussen’s relatives up to her on April 15 for free and has offered to do the same for any family of residents at Beth Shalom who want to do the same.

Haaker told the Jewish Telegraphic Agency that he did not know about Riwal’s Jewish connections. The company has been targeted by anti-Israel groups for its activity there.

“To be honest, she couldn’t really hear us on the crane, but it made her super happy, it filled her with new energy,” said Haaker, a co-founder of the We Are Amsterdam tourism company, which he runs with his Israel-born partner, Guy Kuttner.

To minimize the crane’s footprint on the street outside Beth Shalom, Riwal sent out one of its smallest units, which can only lift one person at a time. Each member of the Aussen clan had a quick chat of about three minutes with Fiet before being lowered and replaced by the next visitor, as onlookers snapped pictures and took videos of the scene on their cellphones.

“The sun was shining, there was a great atmosphere and it was just a perfect day,” Haaker said.

His mother is one of four children raised by Fiet and her late husband, Hans. They took Haaker’s mother into the family as a foster child when she was a teenager.

Fiet, who is not Jewish, moved in to Beth Shalom with Hans about a year ago. Hans was Jewish and had survived the Holocaust in hiding. He died in November.

In mid-March, Beth Shalom went into lockdown for fear of the coronavirus, but it was too late for many. To date, 26 of its 120 residents have succumbed to the virus and some are quarantined to their rooms, NIW reported. This made Beth Shalom “the worst-hit place in the Dutch Jewish community” by COVID-19, according to Esther Voet, the paper’s editor in chief.

One of Fiet’s best friends, also a Beth Shalom resident, died on April 13, possibly from the virus.

The infection rate at Beth Shalom made the Aussens increasingly worried about losing Fiet without getting to say goodbye, her grandson said.

“Even without the virus, there’s a chance that each visit will be the last when you’re talking about a person in their 90s,” Haaker said. “And my grandmother has had lung issues in the past. So this concern about not getting to say goodbye was one of the main reasons I decided to put this together.”