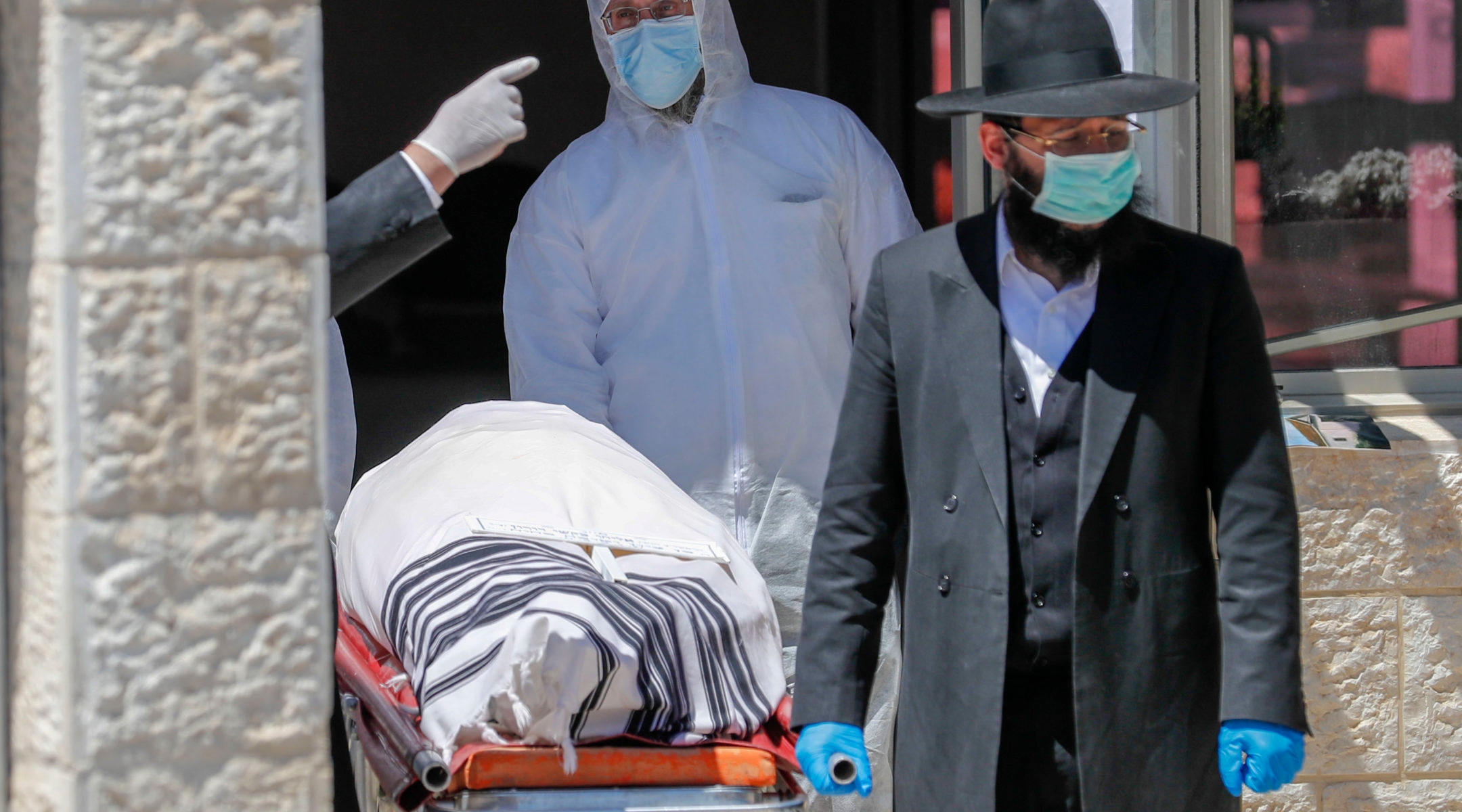 An Israeli rabbi walks alongside the body of Eliahu Bakshi-Doron, the former Sephardic chief rabbi of Israel, who died from complications of the coronavirus. (Ahmad Gharabli via Getty Images)
Advertisement

MODIIN, Israel (JTA) — Recounting past plagues isn’t pleasant, but Jewish history is replete with leaders whose decisions can help us address the challenges we’re facing during the current COVID-19 pandemic.

In particular, rabbinic authorities throughout history have done their best to protect the public while also ensuring the burial of the deceased and preserving, as much as possible, their dignity. Their brave decisions demonstrate that one can preserve public health while respecting religious liberty, something as vital today as ever.

Amid the current pandemic, funeral homes around the world are overwhelmed, leading some to call for quick cremations instead of traditional burials. On Wednesday, the commissioner of the New Jersey Department of Health issued an executive directive stating that “Licensed mortuary practitioners are strongly encouraged to provide for the disposition of human remains by direct cremation or immediate burial or entombment, regardless of whether the cause of death was related to COVID-19.”

These calls for cremation are unlikely to make meaningful inroads among Jews. Traditional Jewish practice is that corpses should be interred and not cremated in consonance with the belief that humans were created in the image of God. A desecrated body, as Deuteronomy 21:23 states, is an affront to God. The Jewish world is filled more with stories about overwhelmed burial societies and socially distanced graveside burials than about people considering cremation who wouldn’t have before the pandemic.

But that doesn’t mean the issue isn’t worth discussing. Unfortunately, the body of the first Jewish victim of coronavirus in Argentina, Ruben Bercovich, was cremated despite communal protests. Argentina is now committed to not cremating Jews against their families’ wishes, but many countries are still encouraging families to cremate.

That is especially not justifiable when the World Health Organization and other health agencies have asserted that there is no increased threat of transmission of COVID-19 through handling these corpses. A recent study in the Journal of Forensic and Legal Medicine Study concluded that transmission may be possible, based on a single case in Thailand, but asserted that the threat can be mitigated by wearing protective equipment. Just as morgue workers will need to safely handle corpses of those victims who desire cremation, Jewish burial societies today can efficiently and carefully bring our beloved to their final resting spots.

Thankfully, in most countries around the world, Jewish and other religious leaders have found solutions that satisfy the demands of health officials while ensuring the proper interment of coronavirus victims. In a few cases, this has even included rabbinic dispensations for immediate burials on the Sabbath or festivals without the presence of family members.

Unfortunately, rabbis have ample legal precedents from which to draw, as this is not the first time that Jews have faced the threat of cremation and other dilemmas of interment during a scourge.

For example, in 1824, Rabbi Eliezer Papo of Bulgaria (then a part of the Ottoman Empire) praised modern Western European societies for taking precautionary measures against plagues, yet criticized them for going too far by cremating their victims or leaving them unburied. In contrast, he claimed, Muslim societies took commendable measures to both treat the victims and bury them appropriately. Sadly, Papo himself would require this benevolence when he died a few years later from cholera. His grave remains a pilgrimage site to this day.

As Papo’s statement indicates, burial decisions have not always been left in Jewish hands, with many diseased bodies quickly discarded in mass graves. This scenario created predicaments for rabbinic authorities since Jewish law generally prohibits, out of respect for the deceased, the transfer of remains to an alternative burial spot.

Would the law be different if the current cemetery was not properly guarded? Might exceptions be made to transfer a casket to a family burial plot if the deceased requested to be interred there?

In recent weeks, these discussions were invoked again as disruptions in air travel make it difficult for Diaspora Jews to be flown to burial spots purchased in Israel. In this circumstance, Jewish decisors have permitted temporary interment in their hometowns until normal travel conditions resume and the casket may be flown to the Holy Land.

In other historical occasions, corpses would be left unburied or cast aside in forests as no one wanted to handle their bodies for fear of contagion. Rabbis, however, demanded interment, even in the shallowest of graves, to prevent the body’s disgrace. During one cholera outbreak, when the local burial society was neglecting to handle corpses entirely and left them in a state of disgrace, Rabbi Avrohom Yeshaya Karelitz himself personally handled one corpse to shame the burial society back into action, thereby preventing further spreading of the disease while paying the deceased their final respects.

This does not mean, of course, that Jewish burial societies were callous toward the concerns of exposure of infectious diseases to their volunteers, especially during repeated cholera epidemics in the 19th century. Rabbinic decisors wisely minimized or waived the customary tahara washing process, especially with regard to external body orifices. We desire to provide this final act of respect to the diseased, yet we must prioritize the health of the living.

As contemporary science now shows from recent cases in West Africa, cholera will regularly spread through funeral rites performed without hygienic precautionary measures. In light of the coronavirus and the need to preserve social distancing among burial society workers, many burial societies have waived these honorific purification rites.

Similarly, rabbinic scholars have permitted corpses infected with COVID-19 to be sealed in body bags before being placed into the casket. In this respect, they follow an example set by the Hungarian Rabbi Moshe Greenwald in the 1800s, who was an outspoken opponent of ritual reforms and generally was adamant that burial societies maintain the old practice of interring corpses in the ground without a casket. Yet he required the use of a casket when someone died from an infectious disease. The Torah demands prioritizing public health over burial customs.

More challenging, however, were cases in which the authorities required some form of physical tampering of the corpse, which is generally proscribed as a desecration of human dignity. In an attempt to bring under control an extended bubonic plague in 1713, Vienna officials demanded covering corpses with slaked lime (calcium hydroxide) to hasten decomposition of the body. Rabbi Yaakov Reischer of Metz, Austria, allowed this treatment for the sake of the deceased’s honor so he would be buried in his family plot and not in a distant forest.

Similar techniques were utilized in the 19th century on corpses of cholera victims, with Papo himself requesting that lime seed be posthumously placed on him. Following these precedents, Shlomo Goren, Israel’s chief rabbi in 1980, issued directives to the Israeli army to utilize body bags and chemical sanitizers in the event of mass casualties from biological warfare. Similarly, while Karelitz generally opposed anatomic dissection of cadavers, he permitted clinical autopsies during an outbreak so that scientific knowledge could immediately advance to save those now at risk.

Yet with all of these dispensations, Jewish legal scholars have always rejected the option of cremation against the trend of greater social acceptance of this practice since the 19th century and increased calls for it in a time of plagues. Part of this resistance stems from a technical legal distinction: While many burial rites have a lower legal status as mere customs, interment in the ground is a biblical commandment.

Yet underlying this distinction is the deeper belief that these laws are meant to bring honor to the deceased. No one who dies from an illness wants to see their body spread contagion. At the same time, all deserve a final interment that bears witness to the inherent dignity granted to all human beings created in the image of God.

Pandemics call upon us to remember the mutual responsibility that we all have to protect communal health while preserving human dignity. Particularly as our global society faces such mortifying losses, we call upon national authorities to respect religious opposition to cremation and prevent this final grave indignity.