Amsterdam’s Jewish nursing home has lost over 20% of its residents to COVID-19. Could it have done more? 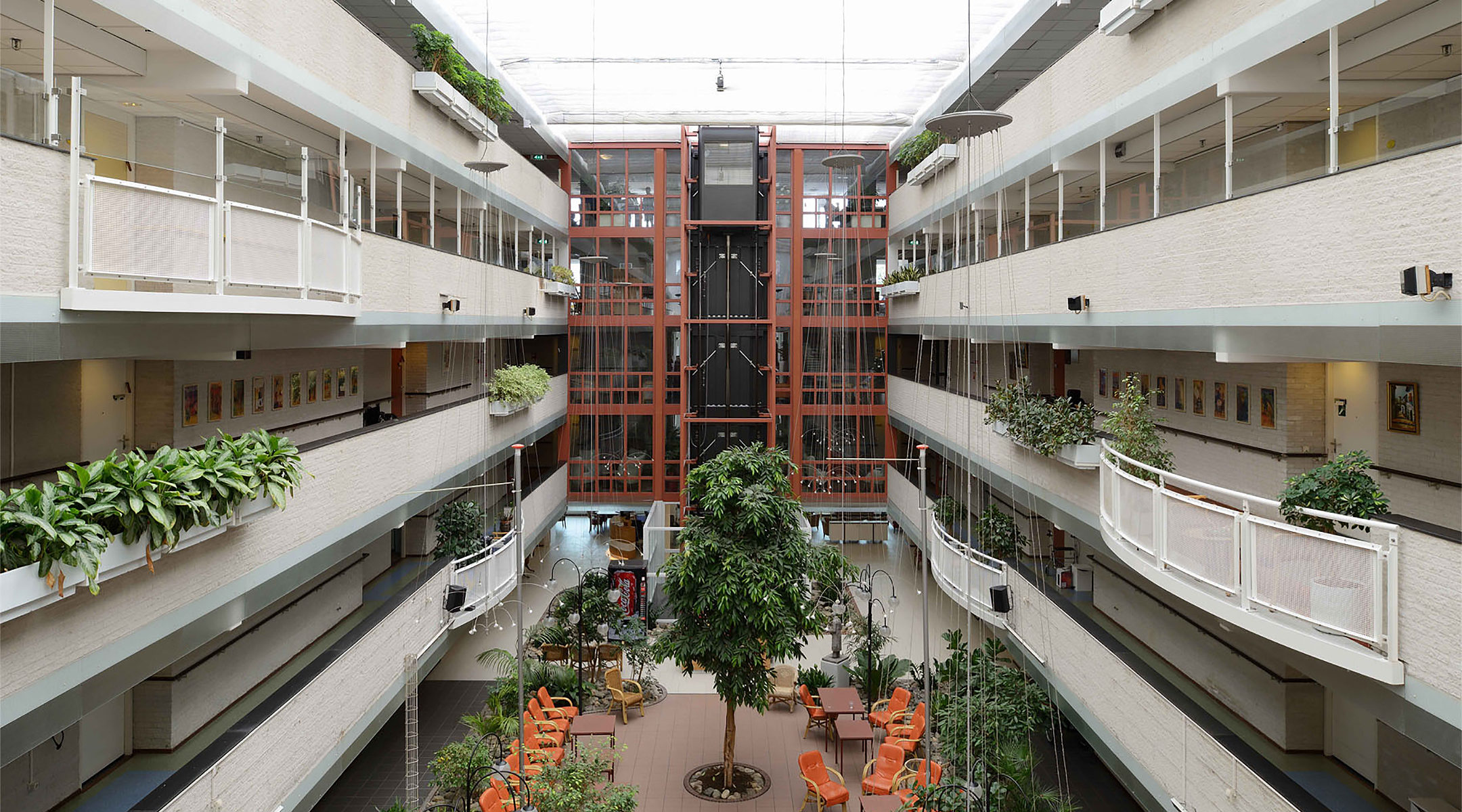 The atrium at the Beth Shalom nursing home in Amsterdam, which has been Dutch Jewry’s hardest-hit institution from the coronavirus. (Courtesy of BOP architecten)
Advertisement

AMSTERDAM (JTA) — The central mission of this city’s Jewish nursing home is to promote a sense of openness. The home, called Beth Shalom, works hard to facilitate social interaction between residents and the outside world.

There are open concerts and bake-offs, as well as a small synagogue that is regularly attended by Jews from outside the institution. The building also has a kosher cafe with quality and pricing that have earned it a steady walk-in clientele.

The theme is even built into the architecture: Beth Shalom, which opened 30 years ago in Amsterdam’s south, is the only institution of its kind in the Netherlands with a convertible glass roof.

“This open-door policy has been our strength because it ensures our residents have an active role in the Jewish community,” Madelon Bino, Beth Shalom’s manager, told the Jewish Telegraphic Agency.

But the coronavirus has turned that strength into a deadly weakness, Bino said.

Beth Shalom has lost 26 people, more than a fifth of its residents, to the virus that Bino said was introduced “early on” partly because of the open-door policy.

“There were people walking in, going out. We actually don’t know how the virus got introduced,” she said.

As the virus ripped through the Beth Shalom community, it also ended up infecting about 40% of the staff, including Bino. Suffering from a fever and fatigue, she had to stay away as the disease devastated her place of work.

“It was terrible. So many people fell ill almost at once,” she said.

Beth Shalom went into lockdown on March 20 in accordance with government policy. But it was too late: The facility has become Dutch Jewry’s hardest-hit institution and responsible for most of the coronavirus death toll from within the community. Some are now claiming that the home should have taken more precautions and could have stemmed the virus’ effect.

Many of the deceased were Holocaust survivors, including 93-year-old Tedje van der Sluis, whose husband, whom she met immediately after World War II, died earlier this year. The couple’s moving love story in the aftermath of the Holocaust was the subject of a widely covered documentary that aired on Dutch TV in 2018.

Van der Sluis, who was not tested for the virus but displayed multiple symptoms, suffered from advanced dementia. Bino said the condition made it difficult to practice social distancing at Beth Shalom. 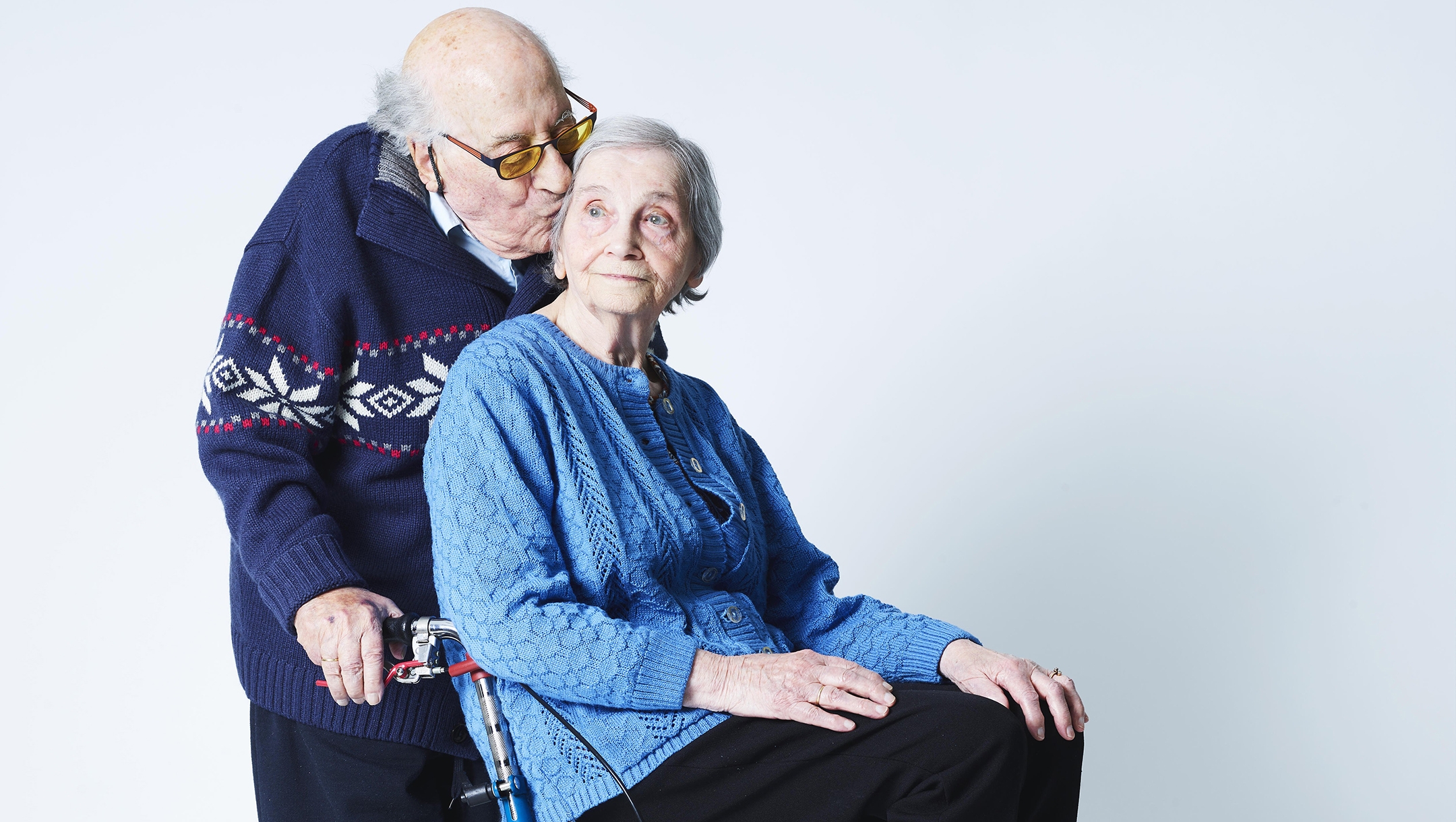 Meijer and Tedje van der Sluis during filming in Amsterdam of a 2018 documentary about their love story in the aftermath of the Holocaust. (Merlijn Doomernik)

“The people with dementia, you couldn’t get them to keep their distance from others. They kept forgetting,” she said. Some residents with dementia “suffered the most because they didn’t understand what was happening, why they couldn’t see their relatives anymore, and it had a bad effect on their emotional situation.”

With 40% of its staff infected and unable to work, Beth Shalom recruited volunteers and other external reinforcement who had to focus on the most severe cases while overcoming shortages in personnel and some supplies, she said.

“It was so sudden and shocking. I was chatting with one of our residents who had corona by her bed and she was OK, then 90 minutes later she was dead,” Bino recalled.

Despite the challenges, some critics and family members of residents say Beth Shalom’s performance amid the crisis has been lacking.

On April 24, the Dutch-Jewish weekly NIW published a critical expose on Beth Shalom’s response to the virus. It compared Beth Shalom to the Visser House, the Jewish nursing home in The Hague, which went into voluntary lockdown three weeks before Beth Shalom — before it had any reason to suspect any of its residents had been infected. The Visser House has had no infections to date.

Nearly two weeks before the story, an organization representing Holocaust survivors, VBV, asked the country’s Health Ministry to review “the possibility that mistakes were made” at Beth Shalom that led to the death toll, which is among the highest of any single institution in the Netherlands.

Cordaan, a medical and social aid firm with 6,000 employees, took over Beth Shalom in 2014 because the shrinking Jewish community in the Netherlands could no longer afford to run the facility. Some say the takeover led to a drop in the standard of care and diluted the institution’s Jewish identity.

“This used to be a home only for Jews,” Ernie Abraham, a resident in his 70s, told Het Parool in 2017. “Now it’s become more mixed. There’s no choice, you can’t have empty rooms.” Abraham died of the coronavirus at Beth Shalom earlier this month.

Bino, who works for Cordaan, said that Beth Shalom has always followed the government’s instructions to the letter and has “done everything, really everything, to help our residents through the crisis.”

Dennis Pekel moved his father, Lex, who has dementia, to Beth Shalom in 2019.

“I expected to at least know what was going on, but I feel I’ve been left in the dark,” the younger Pekel said. “And I know it’s something that happens in crisis situations, but from a community institution, the lack of communication on Beth Shalom’s part was a disgrace.”

Pekel said his father, a highly sociable person in his 70s, is cut off from the outside world and can’t manage to operate and conduct video calls.

“I worry about him because he’s in a place with many coronavirus patients, but also because I’m afraid he’s becoming depressed. And the lack of communication on Beth Shalom’s part isn’t helping,” Pekel said.

Bino said Pekel was something of a communal gadfly who “experienced little” of the drama at Beth Shalom because his father “luckily did not get ill.” She said that many relatives of residents were pleased with the institution’s handling of the situation. But she conceded that the disease had caught the institution unprepared.

The number of confirmed coronavirus cases is now declining at Beth Shalom, and there are only three suspected carriers in isolation, allowing staff to improve communication with family members. Bino said the disease is past its peak there.

On Thursday, the city inaugurated a special visitation compartment at Beth Shalom with thin plastic walls that separate residents from visitors. The compartment is sanitized after each visit.

There’s also been a heartwarming development: Riwal, a crane company owned by an Israeli-Dutch businessman, has helped members of at least one family meet their matriarch outside the window of her third-story apartment at Beth Shalom. The company has invited others to make use of its cranes’ lift for free. 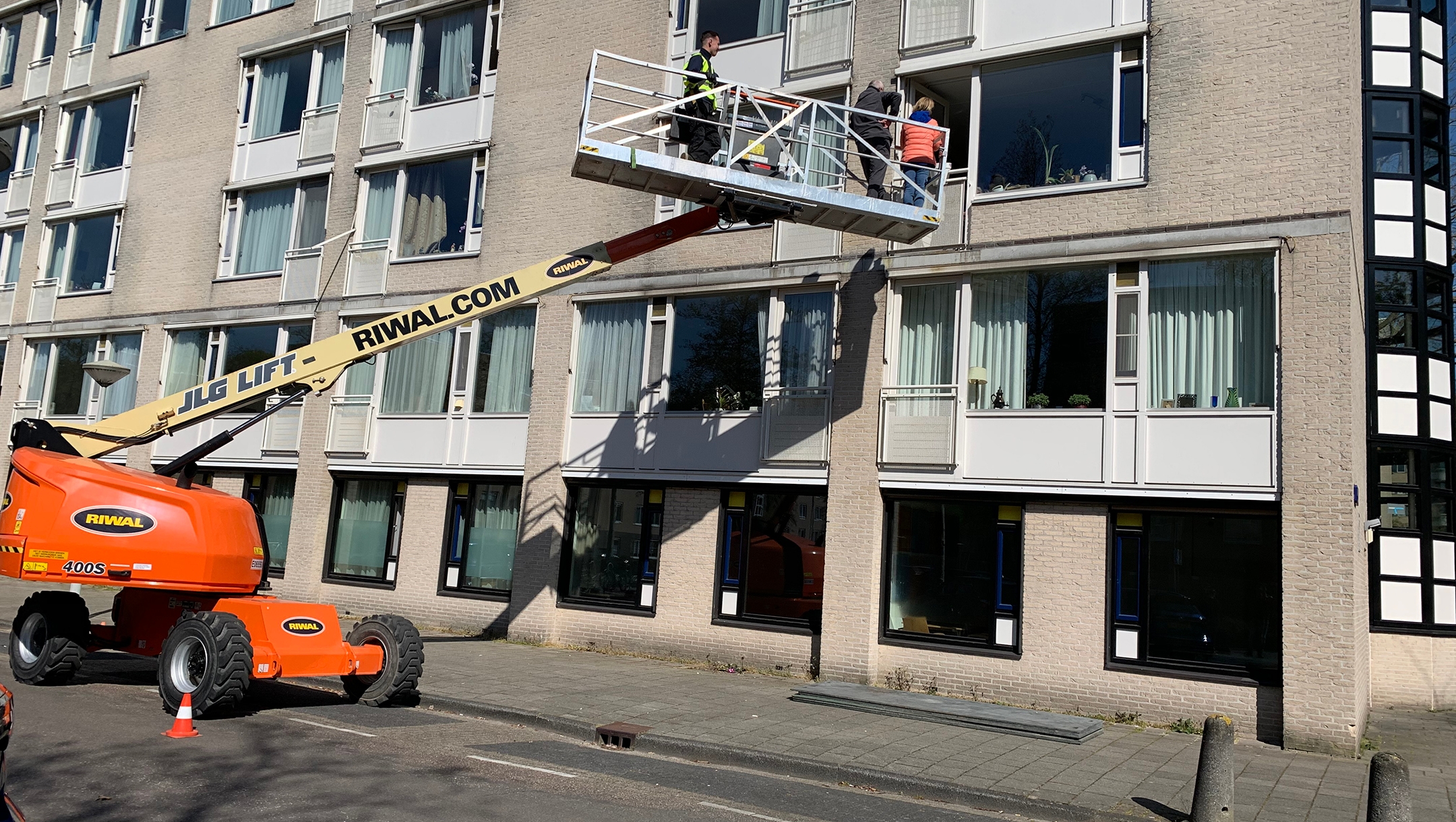 Relatives of Fiet Aussen get ready to meet her from a crane outside the window of her Jewish nursing home in Amsterdam, April 15, 2020. (Courtesy of Riwal Holding Group)

But Esther Voet, the editor in chief of NIW, said there’s an expectation within her community for its institutions to do better than follow government instructions at times of crisis.

The community has access to “some of the country’s best medical experts, including epidemiologists, and it has Israel,” she said, referencing the fact that the Jewish state, where about 200 people have died of the virus, implemented a highly restrictive social distancing policy early in the outbreak. (The Netherlands, by contrast, never enforced a full lockdown, and has had more than 4,500 deaths from the disease.)

“The Jewish community has a lot of inhouse information that doesn’t seem to have been used at Beth Shalom,” Voet said.