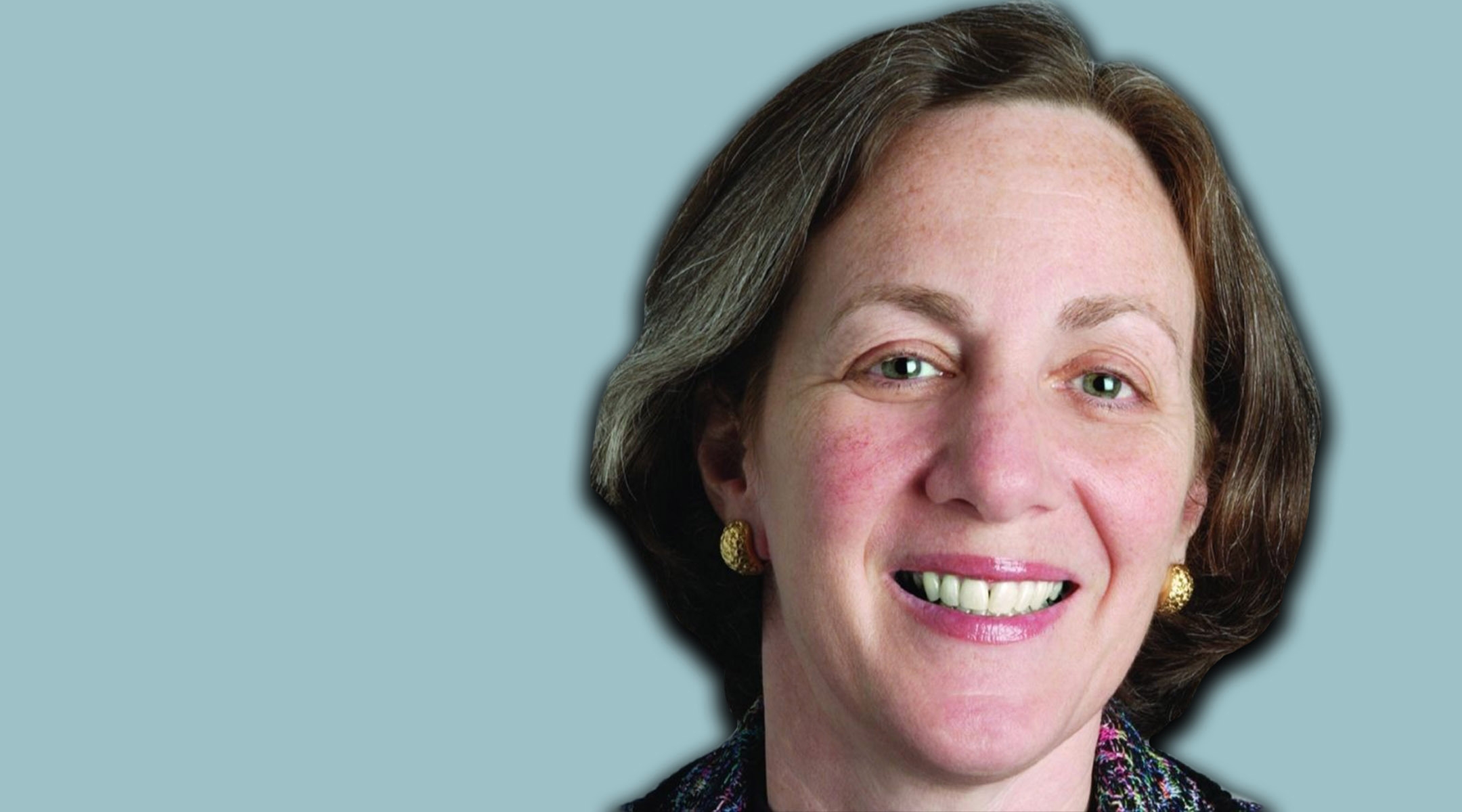 Dianne Lob, whose HIAS group has tangled with the Trump administration on its immigration initiatives, will have to wait a year to take over leadership of a coalition that aims to bring one Jewish voice on Israel-related issues. (Courtesy of the Conference of Presidents of Major American Jewish Organizations)
Advertisement

WASHINGTON (JTA) — The American Jewish community’s leading lobby coalition elected its next leader on Tuesday in a confirmation vote that was anything but routine, having followed a week of tumult over her selection.

So instead of beginning her term as board chair of the Conference of Presidents of Major American Jewish Organizations on June 1, as originally planned, Dianne Lob will take over in April 2021. Amid the change in the selection process, the members also opted to keep the current chair, Arthur Stark, in his post for another year.

The tensions informed the discussion ahead of the vote Tuesday afternoon, which was 31-8 with five abstentions. Another five were absent from the meeting, which took place over Zoom.

“We are disappointed that we have to vote for a whole new process because of a few loud and harmful voices when we would have been proud to support Dianne taking this position now,” said Sheila Katz, the National Council of Jewish Women CEO. “She is ready now. She’s the leader we need now.”

The delay appears to have short-circuited a fight over Trump-era immigration policy and cooperation with Muslim groups instigated by some of the umbrella organization’s more right-wing members.

William Daroff, the Presidents Conference’s CEO, emphasized Lob’s background as a child of refugees in his first official statement.

“Dianne is a visionary leader whose personal history embodies the Jewish-American story,” he said. “As the child of refugees who fled Nazi Germany and the grandchild of family members murdered in the Holocaust, she understands the role of Jewish leadership during these uncertain times and the unique importance of the Jewish State of Israel in securing our survival.”

Stark cast the delay in a statement as an opportunity to show the ropes to Lob, who is not broadly known in the community. “I look forward to working closely with Dianne over the next year, as she becomes fluent in the unique and complex work of the Conference and becomes familiar with the leaders of the member organizations while she brings to bear her exceptional skills in leadership, management and interpersonal relationships,” he said.

Lob is a Wall Street financier who recently finished a term as board chair of HIAS, the lead Jewish immigration advocacy group. Her selection earlier this month drew praise from across the Jewish world. Her statement after the vote was an appeal for unity.

“We will continue to build on our past successes and unify around our shared mission of strengthening the Jewish community, combatting antisemitism, and standing shoulder to shoulder with Israel,” she said.

But over the past week, right-wingers within and outside the Presidents Conference launched a pressure campaign against the nomination, citing Lob’s involvement with HIAS, which has clashed with the Trump administration over immigration policy. Leading the charge was Morton Klein’s Zionist Organization of America, which has strongly opposed efforts to resettle Muslim refugees from Arab countries in the United States and Europe — something that has topped the HIAS agenda in recent years because of unrest in the Muslim world.

In an email to its more than 50 constituent organizations on Sunday evening, Stark and Lob blamed the disruption caused by the coronavirus pandemic for the proposed change.

“Given the extraordinary time in which we are living with the uncertainty caused by COVID-19 and its ramifications, this strategy is particularly relevant and impactful,” the statement said.

But others said they attributed the delay to the pressure campaign from Klein’s group, which spurred not just like-minded right-wing organizations to oppose Lob, but center-right groups to urge the Presidents Conference leadership to consider a compromise.

“I am appalled that Mort Klein, who is an extremist leader, has blocked a woman from becoming chair of the Conference of Presidents,” Jennifer Laszlo Mizrahi, the co-founder of the Mizrahi Family Charitable Fund and the former CEO of The Israel Project, a nonpartisan Israel lobby group that is now defunct, told JTA in an unsolicited email.

The nomination fight comes as the Presidents Conference is navigating its first professional leadership transition in more than three decades. It underscores major, longstanding fault lines in an organization founded in 1956 with the goal of bringing the Jewish community together to speak with one voice on Israel-related issues to the U.S. administration.

The injection of immigration politics into Presidents Conference deliberations underscores the degree to which the left-right divide in Jewish communal affairs has increasingly expanded beyond narrow Israel matters to reflect the country’s wider political discord.

The group mostly lobbies the U.S. government’s executive branch, which is why Lob’s nomination was unusual, given the antagonistic relationship between HIAS and the Trump administration. HIAS has clashed repeatedly with the current administration on its immigration policy and has been lead plaintiff in at least two lawsuits against the administration.

One possible result of the delay in Lob becoming board chair is that Joe Biden, the presumptive Democratic nominee who is much more sympathetic to HIAS’ immigration posture, may be president when she does.

The White House, according to a Jewish organizational source, did not object to Lob as the conference chairwoman as long as immigration was not on the agenda — an easy ask, considering the Presidents Conference does not deal with domestic issues. A Trump administration official who deals with the Jewish community did not respond to requests for comment.

The vote leaves the Presidents Conference openly divided at a crucial moment. Lob has been forced into a defensive position, emphasizing in a letter to the group’s constituents her bona fides as the daughter of German refugees and her embrace of mainstream pro-Israel positions, including rejecting the boycott Israel movement as “reprehensible” and calling anti-Zionism “a modern form of Jew-hatred.”

Meanwhile Klein, who prides himself on confronting Israeli leaders over actions he feels endanger Israel and chides other Jewish officials for not following his lead, has burst into public view again. His organization has criticized HIAS for years, saying it allies itself with critics of Israel and claiming that its work makes Jews in America less safe. In fact, all recent terror attacks against Jewish Americans have been carried out by native-born Americans, including the deadly Tree of Life shooting in Pittsburgh whose perpetrator said he was motivated by hatred of HIAS.

The rancor between Klein and HIAS erupted in 2018 with a complaint filed by HIAS against the ZOA, which accused the group of violating Presidents Conference rules by making ad hominem attacks. The complaint earned the ZOA a rare reprimand.

Klein’s campaign against Lob has unleashed a countervailing burst of criticism of the ZOA leader. And the resulting compromise sparked furious reactions from Jewish women leaders and from those on the left who see the Presidents Conference as overly cowed by the right wing. Lob would be only the third chairwoman in the umbrella group’s nearly 65-year history, and the Presidents Conference has been slammed on social media for group photos that are exclusively male.

On Twitter, Rabbi Jill Jacobs, who leads T’ruah, a rabbinical human rights advocacy group that is not a member of the Presidents Conference, said the decision “demonstrates that [the Presidents Conference] is held hostage by a small and loud group of right-wing extremists who do not at all represent the overwhelming views of the American Jewish community.”

Some 70 Jewish students at top universities wrote to the Presidents Conference this weekend urging it to impose “appropriate institutional consequences” on the ZOA for what the students called Klein’s “pattern of racist and Islamophobic behavior.” A number of the signatories are active with J Street U, the student affiliate of J Street, the liberal Jewish Middle East policy group that has clashed in the past with ZOA. Ethan Kahn, a Princeton student who helped organize the letter, told JTA it was a grassroots effort unaffiliated with any organization.

The pandemic frustrated efforts to push back against Klein’s initiative. Lob, a financier, was unable to personally meet with the leaders of the groups to assuage concerns. She will also forgo the traditional immediate inaugural trip to Israel post-election. That trip would have provided photo ops of Lob with Israel’s right-wing government and gone some way to tamp down criticism of her Israel credentials.

Klein in an interview prior to the vote said the compromise was “somewhat positive, but minimal” because Lob’s election, once it occurs, appears irreversible, even if it is delayed for a year. One of Klein’s complaints was that Lob appeared to be uninvolved in Israel issues. But he said the leadership transition could stave off his criticism.

“We do have almost a year to get to know her and see if she can learn more,” Klein said.