Mayor de Blasio is no enemy of Orthodox Jews. But others are weaponizing the coronavirus to vilify our community. 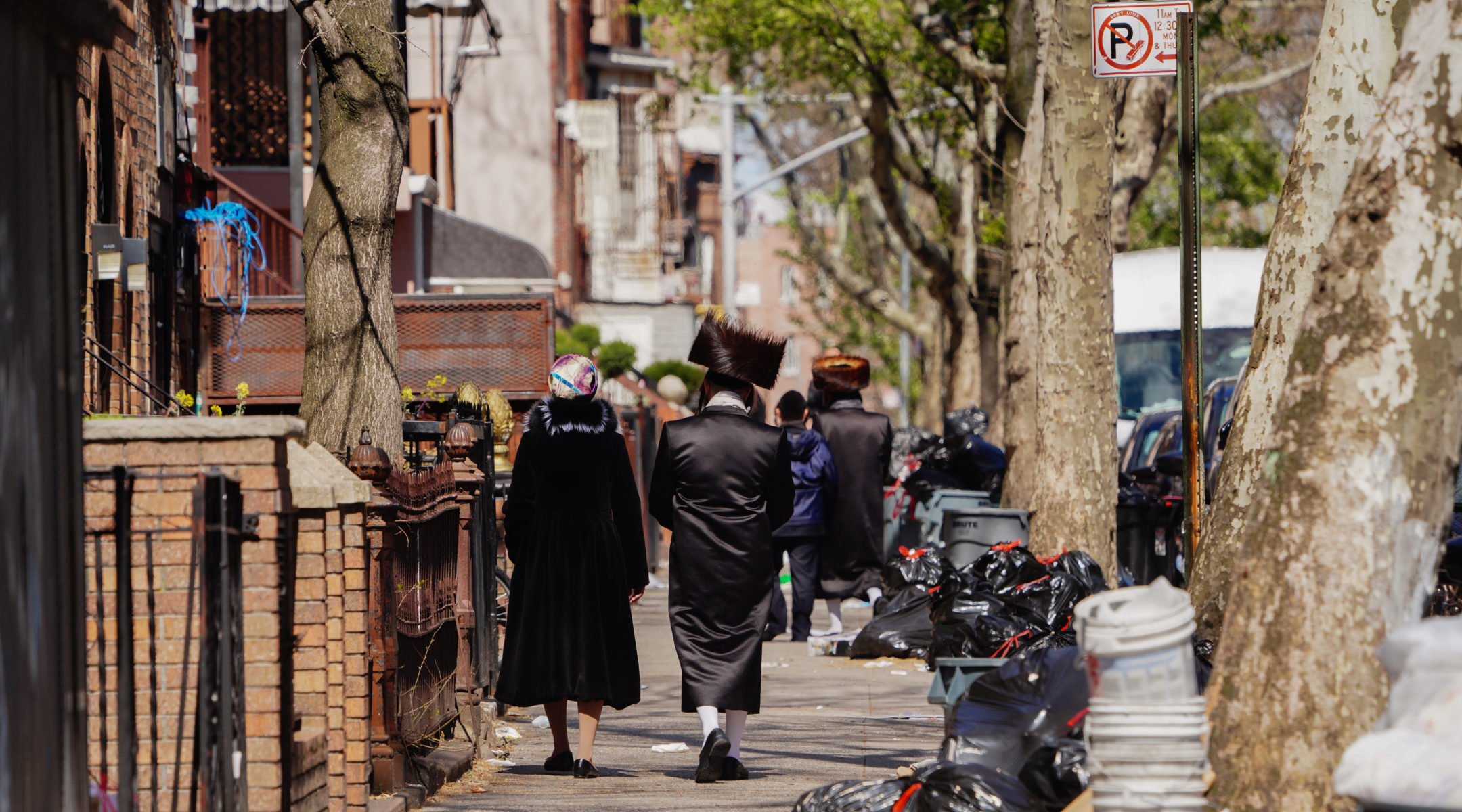 Haredi Orthodox Jews are seen at Passover in the Williamsburg section of Brooklyn amid the coronavirus pandemic, April 11, 2020. (John Nacion/NurPhoto via Getty Images)
Advertisement

NEW YORK (JTA) — Among the most disturbing spectacles over the months since the coronavirus was unleashed on the world have been the attacks on haredi Orthodox Jews in both Israel and the United States.

Some criticisms, like New York City Mayor Bill de Blasio’s stern tweets on Tuesday night following a funeral held in Brooklyn, are not born of antipathy to the Orthodox community. The mayor issued his rebuke to “the Jewish community” that “the time for warnings has passed” in the heat of the moment. And he seemed unaware that the funeral, although it became too crowded, had been coordinated with police.

His choice of words was regrettable, but he told a news conference the next day that he hadn’t intended to slur the community. And his relationship with the community during his tenure has been very good.

Other critics, though, are less defensible. Over the weeks since the coronavirus crisis began, these critics have been attacking the entire Orthodox world without justification.

Haredi Orthodox Jews — the perennial they — are always to blame for their backward ways. They reacted too slowly to close their schools. They ignore safety precautions and gather repeatedly in crowds. Their leaders are ignorant and are followed mindlessly by the masses.

Never mind that those violating social distancing in the haredi world are outliers, no more representative of haredim writ large than those crowded along the Hudson watching the Blue Angels and Thunderbirds on Sunday are of New Yorkers in general. Most of us have been staying home for months, doing our best to keep ourselves and others safe.

The initial haredi reluctance to close schools was a function not of defiance but of valuing what the Talmud calls “the breath of the mouths of children in their places of learning” on “which the world depends.” To an Orthodox Jew, children’s Torah study is spiritually vital, and only to be compromised when it is absolutely necessary.

But once the gravity of the situation was clear, the haredi reluctance to close schools quickly gave way to full compliance with medical advice. Once the virus’ virality was clearly established, haredi leaders not only shut down shuls and schools but pleaded with their flocks to heed every governmental health warning.

Unfortunately, none of that has stopped those given to disparaging traditionally religious Jews from doing so once again.

One particularly distasteful attack on haredi leaders, and on Jewish religious tradition itself, appeared in the Jewish Journal.

On April 20, Rabbi Irving “Yitz” Greenberg, after duly expressing his great sympathy for haredi victims of the coronavirus, offered his explanation for why some haredi communities seem to have suffered disproportionately from the plague.

No, it wasn’t because of the density of many haredi towns and neighborhoods. Nor were the regular interactions born of religious events, celebrations and daily prayer services salient factors. And no, poverty and the challenge of confining large families in small apartments were not the main things to blame.

The true villains, in Rabbi Greenberg’s judgment, are haredim and their leaders, a longtime bugaboo of his.

With superb hindsight, he reprises how some Hasidic leaders in 1930s Europe hadn’t foreseen the Holocaust, and counseled their followers not to panic and flee the continent.

This is nonsense. The reason Jewish religious leaders are respected is their sensitivity and Torah scholarship, and that is very different from blind obedience. A great doctor is fallible, too, but her opinion is still invaluable.

Blaming Jewish religious leaders, of course, has always been a popular pastime. “What good are rabbis?” the Talmud (Sanhedrin 99b) notes, was even in antiquity a common refrain of renegade Jews.

Even before Purim, when there were no regulations limiting human interactions or closing schools or businesses, the national haredi organization Agudath Israel, which I’m privileged to work for, alerted the community to the potential danger of COVID-19. It was acting as always on the directives of the major rabbinic leaders comprising the Council of Torah Sages.

Two days later it shared the strong recommendation from infectious disease specialists to severely limit “all social or communal gatherings, including closing shuls and schools.” And as soon as government regulations were in place, they were endorsed and publicized at the instruction of haredi leaders.

In Israel, when the government’s Health Ministry banned even outdoor prayer quorums, one of the most respected religious leaders in that country, Rabbi Gershon Edelstein, dean of the famous Ponevezh Yeshiva, declared that under the circumstances, public prayer is “a danger, impossible … a sin.”

Haredi couples and families celebrated Pesach in seclusion without other relatives present — for many for the first time in decades.

Rabbi Greenberg ignores all that in his quest to vilify haredi leaders. Haredim, he mocks, “firmly believe that as long as humans please God … [He] will defeat their enemies.”

Haredim — like all believing Jews — know that we are not perfect and cannot rely on our mitzvot and avoidance of sin alone to ensure our safety, that we must make efforts on our own behalf, too. Despite Rabbi Greenberg’s insinuation, we do just that. At the same time, though, we recognize the merit of our spiritual actions, which Rabbi Greenberg, astoundingly for any rabbi, seems to discount.

He claims, without any evidence, that “some Haredim allowed themselves to be exposed to the coronavirus because God would protect them.”

Rabbi Greenberg might do well to consider some actual facts. Like the overwhelming haredi response to calls for plasma donations from survivors of the infection. Facilities in New York, Baltimore and Lakewood, New Jersey, were flooded with thousands of haredi blood donors.

Blaming easily identifiable and, to some, “strange” haredim for various societal ills is easy. But doing so is not only contrary to everything our society was founded upon but won’t help us get through this crisis any faster.

At a time like this, we should be unified in doing all we can to protect ourselves and others, not point fingers, especially at imaginary culprits.