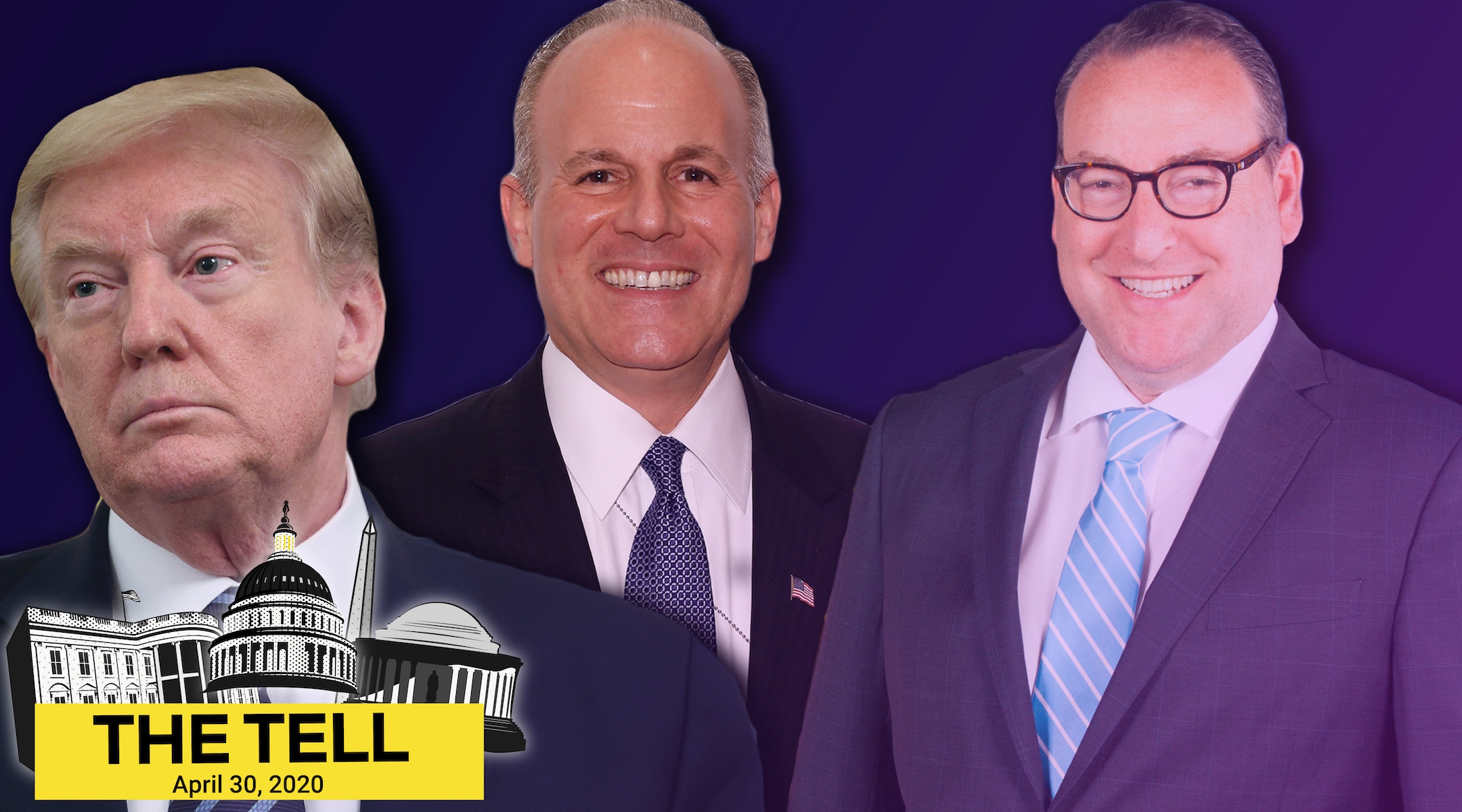 If a name is missing from my Trump roundup below, drop me a line and I’ll likely get to it. It’s a long way to November.

The White House released a statement on Wednesday proclaiming May Jewish American Heritage Month indicating that the president, or his team, understands the dimensions of the threat posed by Biden in key states where Jewish voters can make a difference, primarily Florida, but also Pennsylvania, North Carolina and Michigan.

The presidential proclamations, since the holiday was established in 2006, usually celebrate Jewish resilience and list the Jewish contributions to American society. Under Trump’s predecessors, they also included a nod to the U.S.-Israel relationship.

Most of Trump’s proclamation this year focuses on the threat facing American Jews from white supremacists. (I just did a deep dive into my emails: Trump has never mentioned Israel in his Jewish Heritage Month proclamations, while Barack Obama routinely did.)

“Our country has wept too many times in the aftermaths of horrific attacks, including last April when a murderer opened fire in a synagogue in Poway, California, taking innocent life and shattering families in a cowardly display of evil,” this year’s proclamation said. “Such unconscionable acts are an abomination to all decent and compassionate people. Hatred is intolerable and has no place in our hearts or in our society.”

Trump’s past equivocations in rejecting support from white supremacists have been the prime driver of Jewish unhappiness with his administration. Biden has made Trump’s associations with white supremacists central to his overall campaign — more than any other candidate in the primaries.

In his Jewish Heritage Month proclamation, Trump mentions his executive order last year combating anti-Semitism, which is based on Title VI of the 1964 Civil Rights Act. Not mentioned is that complaints citing the order have so far focused on allegations that pro-Palestinian activism on campuses crosses into anti-Semitism. Key figures in the effort to identify anti-Zionism as an expression of anti-Semitism are Kenneth Marcus, the top civil rights official at the Education Department and Elan Carr, the State Department’s anti-Semitism monitor. Both men come out of the center-right pro-Israel community — Marcus as the founder of the Brandeis Center for Human Rights, and Carr as a president of the Alpha Epsilon Pi fraternity.

The radical changes in Israel policy under Trump include moving the U.S, Embassy to Jerusalem, slashing aid to the Palestinians to almost nothing, quitting the Iran nuclear deal, recognizing Israel’s claim to the Golan Heights and a peace plan released this year that winks and nods at Israel’s annexation of parts of the West Bank.

Jared Kushner, Trump’s Jewish son-in-law, officially handles the Israel portfolio, but the folks in the field handling the nuts and bolts are probably more influential, chief among them Ambassador to Israel David Friedman. Trump’s former bankruptcy lawyer, a one-time prominent backer of the settlement movement, is the principal mover and shaker on the Israel-specific components. Friedman is among a handful of non-family Trump officials who span Trump’s entire first term.

Stephen Miller, a top White House adviser, like Friedman, is another non-family member who has survived the entire term and whose influence on immigration policy is ever expanding. Most recently, reports have emerged that he is seizing on the coronavirus pandemic to entrench immigration restrictions.

There are three classes of Jewish Trump donors: The FFBs (friends from the beginning), the Johnny-come-latelies and the discarded.

FFBs: Trump’s evident grief over the coronavirus death last month of Stanley Chera, a leader of New York’s Syrian Jewish community, highlighted how far back and deep his ties are with the city’s Jews — particularly those who jostled with him in the real estate sector. Another longstanding backer from that sector is Jason Meister, who in 2017 penned an op-ed titled “Question to My Fellow Jews: How Can You Still Vote Democrat?”

Johnnies: Many GOP establishment figures were wary of Trump the first time around because of his bullying affect and his fraught dealings with other minorities, particularly Hispanics and Muslims, and his history of allegations of sexual impropriety. The Republican Jewish Coalition had a tense relationship with Trump for much of its 2016 campaign; its chairman, Norm Coleman, famously said he would “never vote” for “a bigot, a misogynist, a fraud and a bully” like Trump. Last year he recited a version of “Dayenu” thanking Trump. The RJC last year pledged to spend $10 million to elect Trump.

A turning point for Trump and the GOP establishment, and particularly its Jewish establishment, was Sheldon Adelson’s endorsement in May of ‘16. Adelson, the Las Vegas casino magnate and pro-Israel donor who is one of the richest men in the world, and his physician wife, Miriam, had favored Trump’s GOP rivals. In 2018, Trump conferred the Medal of Freedom on Miriam Adelson. This time, Adelson has pledged $100 million to elect Trump and Republicans.

Another wary and Jewish GOP influencer was Fred Zeidman, who could not be persuaded by Adelson to back Trump and stayed out of the general election contest. The Houston businessman and chairman emeritus of the U.S. Holocaust Memorial Council has since done a 180, telling Politico last year that he tore up a T-shirt naming George W. Bush as the most pro-Israel president.

Paul Singer, the billionaire investment counselor and major GOP donor, also was notably wary of Trump in 2016: He funded opposition research against the president that helped fuel the Mueller report into allegations that Trump’s campaign colluded with Russia. He’s still not quite on board yet with giving money directly to Trump’s campaign, but he is providing major bucks to Republicans running for Congress, which pleases Trump.

The discarded: A notable Johnny-come-lately was Gordon Sondland, the Washington state hotelier who inveighed against Trump during the campaign and then donated $1 million to Trump’s inauguration. That got Sondland an ambassadorship to the European Union — but his testimony affirming that Trump sought to pressure Ukraine into launching a criminal investigation into Biden helped impeach Trump and got him booted from his post.

Then there are the Jewish advisers who were with Trump from the beginning of his campaign, or before, and now have disappeared because of scandals. Among them are Elliott Broidy, the Los Angeles investor who allegedly worked with George Nader, an American adviser to the United Arab Emirates, to influence U.S. policy in opposition to Qatar  (and who like Trump had Playboy model issues), and Michael Cohen, the one-time Trump lawyer who is set to be released from jail for his role in paying off women who accused Trump of marital infidelity.

Remember the chatter that Trump wanted Kushner and Ivanka Trump to decamp to New York and stay out of trouble? Nah. Kushner is now running the pandemic response, and as he had done with his Middle East peace plan, deriding old Washington hands as dinosaurs unequipped for the change America needs. Kushner’s love of strategic disruption aligns exactly with his father-in-law: He’s not going anywhere soon. And Ivanka is very much along for the ride.

And a woman shall lead them, but next year: A compromise spurred by a right-wing pressure campaign elected former HIAS chairwoman Dianne Lob as chairwoman-elect of the Conference of Presidents of Major American Jewish Organizations to take over in ‘21. Lob, the third woman to be tapped for the position in the Presidents Conference’s 64-year history, does not assume the -elect position until June 1 (the date she was supposed to start as official chairwoman). Does that make her chairwoman-elect-elect?

Garcetti gets a star: On Thursday, Biden named his vice presidential selection committee co-chairs. He has said he will name a woman as his running mate, and reportedly favors an African-American. Among the lead candidates are Sen. Kamala Harris, D-Calif.; Stacey Abrams, who almost nabbed the Georgia governor spot in 2018; and Atlanta Mayor Keisha Lance Bottom. The committee has four co-chairs — two women and two men — including Los Angeles Mayor Eric Garcetti, a rising Democrat who is both a Mexican American and Jewish.

Biden out of the box for the Jews: It’s a pandemic, and that sucks the air out of everything else. But Biden is already advancing a three-point plan, which he released exclusively to the Jewish Telegraphic Agency, to protect Jews and other targets of hate crimes. It includes increased funding for nonprofits, prioritizing hate crimes prosecutions and a holistic approach to stemming violence, including taking steps on gun ownership reforms and mental health reforms. He also said he will not move the U.S. Embassy back to Tel Aviv from Jerusalem. 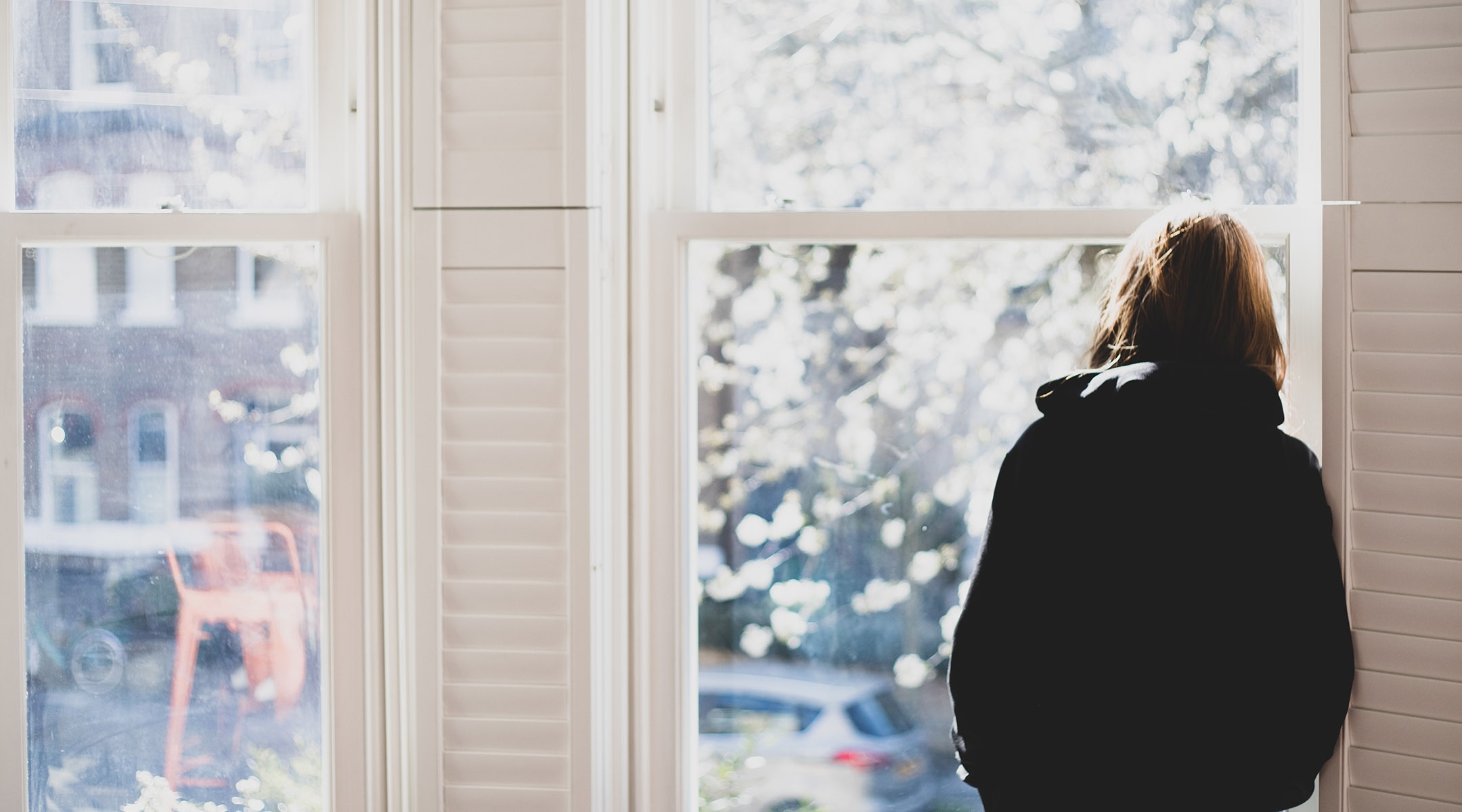 A child staring out the window (Getty Images)

In Vogue, Sarah Wildman writes about how she deals with pandemic confinement “with one enormously immunocompromised kid and another one bored out of her mind”: Ryan Heffington’s “Sweat Fest,” “an Instagram live dance party for the masses.” Wildman says it delivers intimacy “that, in a lonely moment of global and personal crisis, may be the biggest gift of all.”

I don't know who needs to hear this, but DO NOT go to the beach during the quarantine! pic.twitter.com/lnI38MafKR

Gal Gadot, the current Wonder Woman, sings for her fans to keep them calm during the pandemic. Lynda Carter, the original Wonder Woman, has different ideas about best pandemic behavior.