A ‘Holocaust Disneyland’? Historians say a controversial film director wants to turn a Ukrainian museum into one. 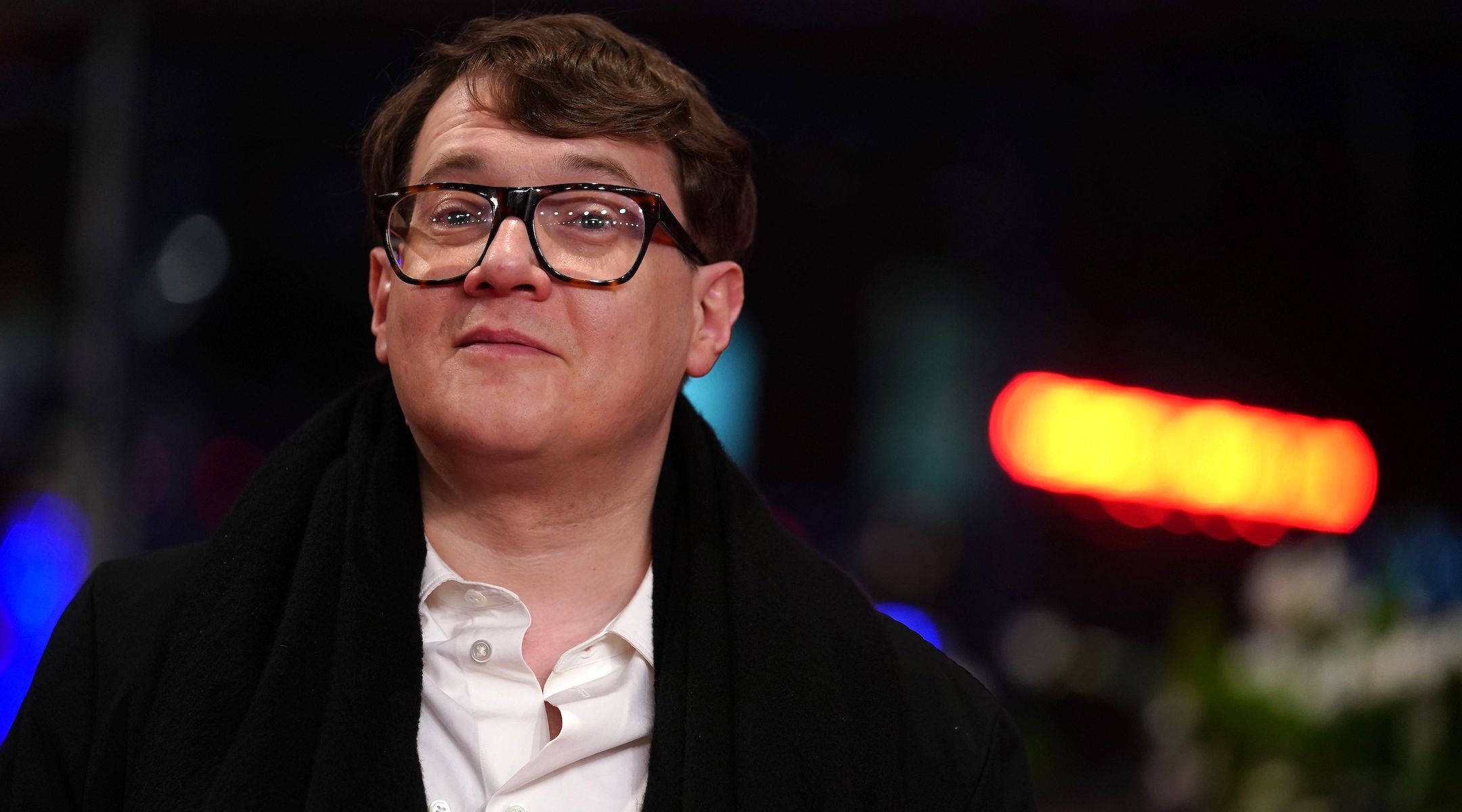 (JTA) — The latest cinematic release by the Russian film director Ilya Khrzhanovsky is so extreme that he is currently under a police investigation for alleged torture of extras, including underage orphans, in Ukraine.

He worked on the movies in his “Dau” series on a 3-acre set in the Ukrainian city of Kharkiv over more than a decade to fictionally recreate the harshness of life under the Communist Soviet Union.

Until recently, the films were hailed as innovative achievements. But now Khrzhanovsky is accused of abusing his actors, exploiting them through exposure to physical violence, humiliation and sexual harassment.

Beatings, interrogations, rape scenes and other forms of abuse were allegedly simulated by the actors, nearly all of them amateurs and many of them minors, including some from orphanages, according to at least one expert on children’s neuropsychology.

Khrzhanovsky is also, at least for now, the artistic director of a big Ukrainian Holocaust commemoration project: The Babyn Yar Holocaust Memorial Center, a museum that has cost millions and is still in the planning stages. It’s named after one of the worst Holocaust pogroms, in which Nazis and local collaborators murdered more than 150,00 people, including 50,000 Jews, at the Babi Yar ravine, also known as Babyn Yar, outside Kyiv.

The Ukrainian government has invested a million dollars in the memorial center — more than they’ve put into any previous Holocaust commemoration.

According to a former director of the project, Khrzhanovsky, who is Jewish, wants to bring his hyper-realistic cinematic style to the museum and make it a “Holocaust Disneyland.”

According to Karel Berkhoff — who was appointed chief historian of the museum in 2017 but has since quit — Khrzhanovsky told staff that he plans for displays “in which visitors would find themselves playing the role of victims, collaborators, Nazis, or prisoners of war who were forced to burn corpses.”

But the scandal over his latest film, “Dau: Degeneration,” has put Khrzhanovsky’s work with the museum in jeopardy. Dozens of Ukrainian artists and historians penned an open letter on May 1 demanding his dismissal from the Babi Yar project.

“Mr. Khrzhanovsky’s appointment as artistic director has already tarnished the Memorial’s reputation and is undermining the achievements of the previous three years of work, while the Center faces a brewing international scandal,” wrote the cosignatories.

“The Babyn Yar Holocaust Memorial Center and DAU project are two completely distinct projects,” the statement read. It added that “all accusations addressed now to Illya Khrzhanovsky are made based on emotions and subjective thoughts built upon speculations and assumptions.”

Yet Khrzhanovsky’s nomination as artistic director, which was announced in December, preceded and likely caused several key individuals from the staff of the museum to quit. The museum’s former director general, Hennadiy Verbylenko, left last year, as did ex-executive director Yana Barinova, among others. Most of them have not said why they quit. 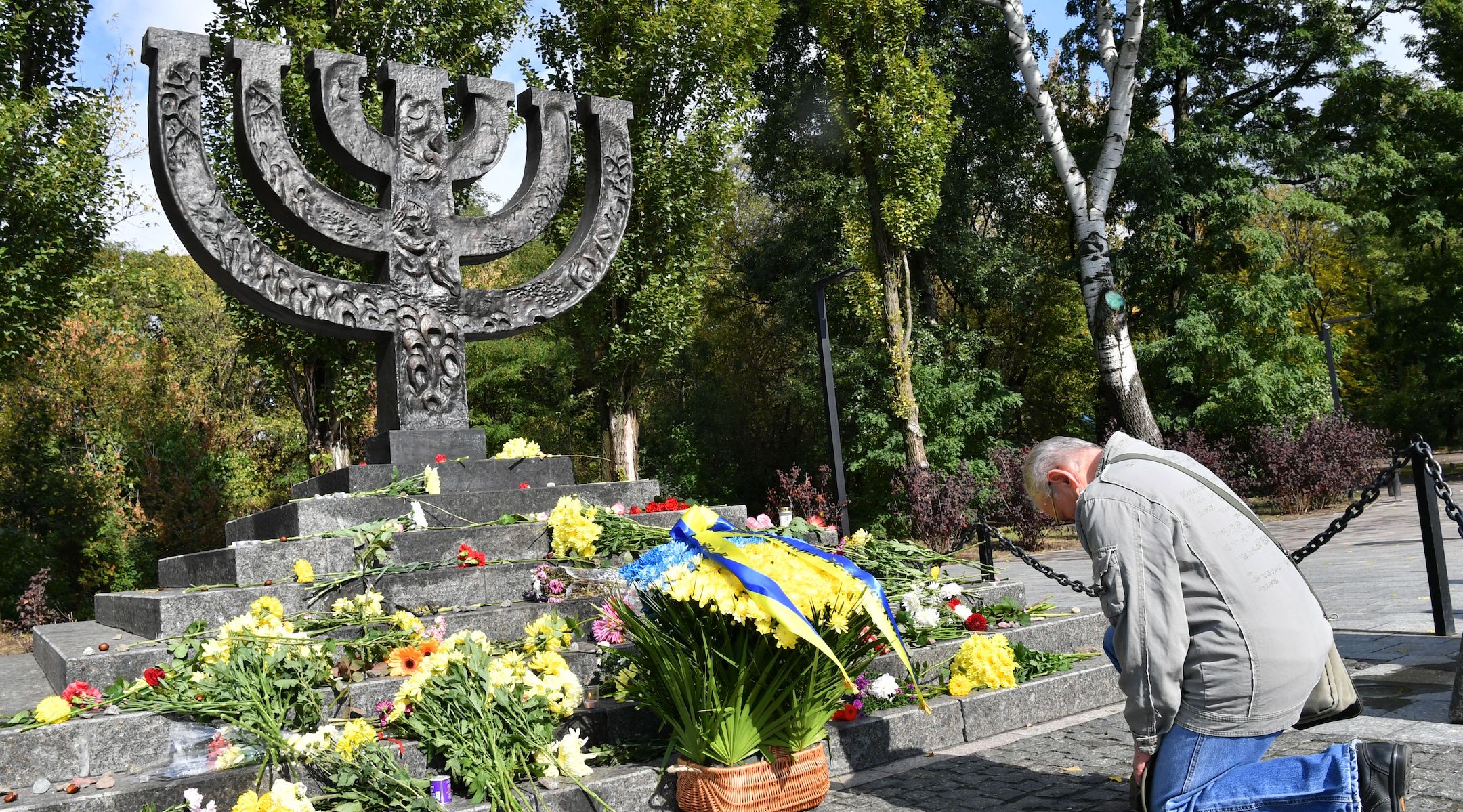 The memorial at the site of the Babi Yar killings, seen in 2019, includes a large menorah. (Sergei Supinsky/AFP via Getty Images)

The environment Khrzhanovsky created for the “Dau” films was completely immersive. The project was sometimes referred to as the “Soviet Truman Show,” referencing the 1998 Hollywood film about a man whose everyday life was filmed without his knowledge.

“There wasn’t a script, there wasn’t a screenplay, we were living as we lived,” said actress Natalia Berezhnaya at a press conference at the prestigious Berlin International Film Festival in February. “In some ways it was scary, in some ways it was oppressive. We had fear, we had love, we had relationships. We were living, we didn’t work according to a screenplay: It was our life.”

At the same press conference, Khrzhanovsky denied any illegal incidents had taken place during filming.

But the participation of a prominent Russian neo-Nazi, Maxim Martsinkevich, in the “Dau” project is undisputed. Known as Tesak, Russian for “the cleaver,” he was filmed reenacting what he is currently 10-year sentence in a Russian penal colony for: robbery and assault.

Most prominent Holocaust museums, including the Auschwitz-Birkenau State Museum, discourage or forbid role playing on their grounds. At Auschwitz, for example, it is forbidden to climb inside the models of cattle wagons, resembling the ones the Nazis used to transport Jews.

The Auschwitz museum was criticized in 2015 just for showering tourists standing in line during a heat wave with water. Offended Jews around the world argued that they “looked like the showers that the Jews were forced to take” before entering Nazi gas chambers.

Khrzhanovsky has declined to publicly specify his vision for Babyn Yar, saying it will be presented sometime this year. He did not reply to an interview request.

Last week, Berkhoff warned against a departure from international standards at the would-be museum in Kyiv, whose partners abroad include former Sen. Joseph Lieberman, the former vice-chancellor of Germany Joschka Fischer, and the ex-president of Poland Alexander Kwasniewski. Eric Schultz, who had served as deputy white house press secretary under former president Barack Obama, is the museum’s top public relations man in the U.S.

“My biggest fear is that it will be an entertainment complex to some extent,” Berkhoff said in an interview with UkrInform. “I don’t want it, it’s a memorial.”