Hans Calmeyer is remembered for saving thousands of Jews. A Holocaust survivor says he sent her to Auschwitz. 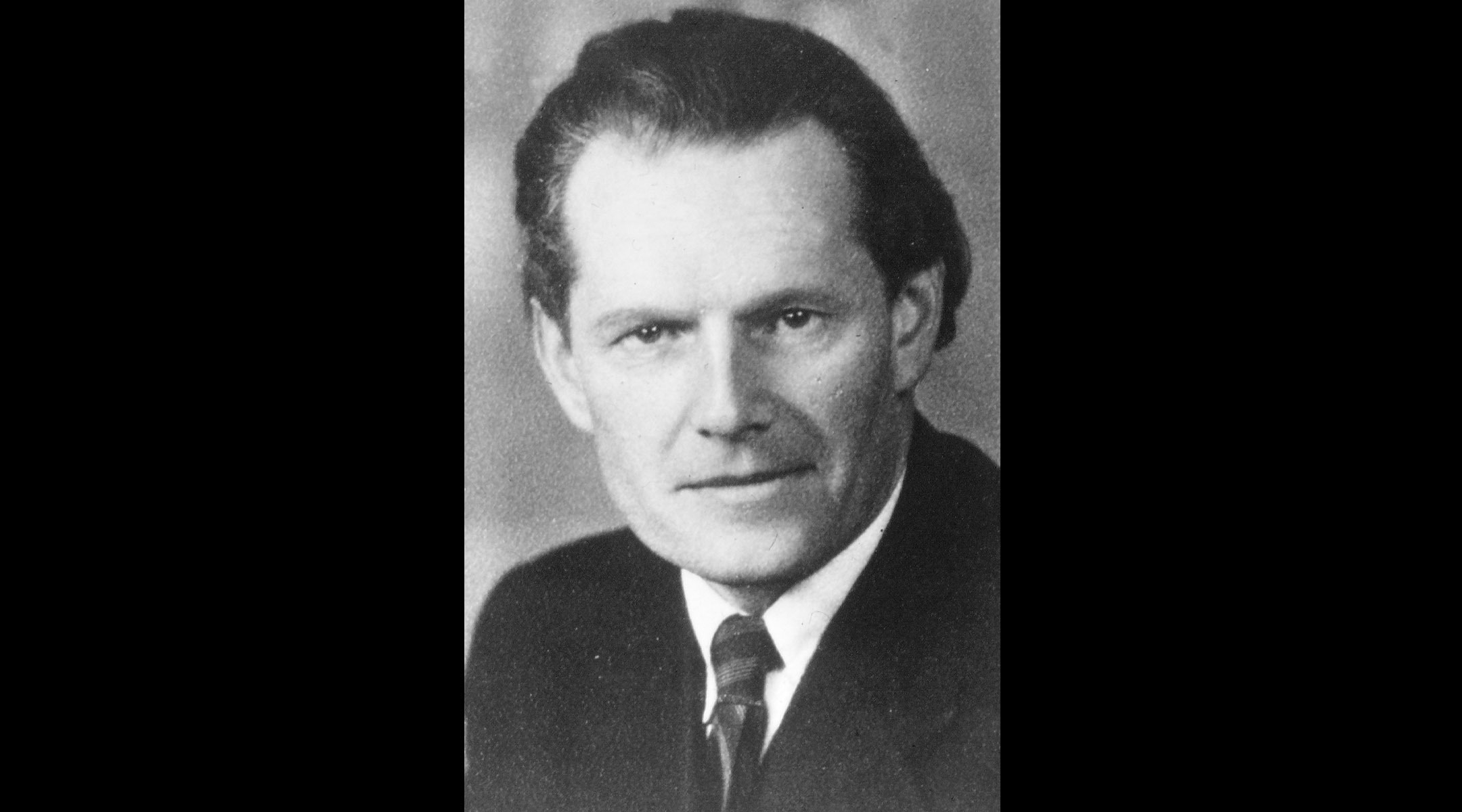 Hans Calmeyer, shown in 1940, has long been seen as a rescuer of Jews. (Courtesy of Laureen Nussbaum)
Advertisement

AMSTERDAM (JTA) — In his native Germany and beyond, Hans Calmeyer is celebrated as a hero who saved more Jews from the Holocaust than Oskar Schindler.

As a jurist for the Nazi German forces in the Netherlands, Calmeyer was put in charge of a small team that evaluated pleas by people who tried to save themselves by disputing their classification as Jews. According to Israel’s national Holocaust museum Yad Vashem, Calmeyer’s actions in his post, which involved accepting many of these pleas — some were quite flimsy — saved at least 3,000 people.

In 1992, Yad Vashem posthumously recognized Calmeyer, who died in 1972, as a Righteous Among the Nations, Israel’s title for non-Jews who risked their lives to save Jews.

Yet in recent months, these honors are being challenged — including by a 92-year-old survivor and her family, who say that Calmeyer had her sent to Auschwitz and threatened to deport her non-Jewish father when they pleaded with him to save her.

Survivor Femma Fleijsman told this story in a new book and a television documentary that was aired Monday by the Jewish Programming division of the EO broadcaster in the Netherlands.

Fleijsman was the daughter of a non-Jewish window washer, Albertus Reijgwart. Yet municipal records predating World War II incorrectly listed her as the daughter of her mother’s ex-husband, Salomon Swaalep, who was Jewish. Still, Calmeyer rejected Fleijsman’s appeal and she was sent to the Bergen-Belsen camp in Germany.

Her father sent Calmeyer impassioned letters, but they backfired: Calmeyer had Fleijsman transferred to Auschwitz and threatened to classify Reijgwart, a Catholic from birth, as a Jew, citing Nazi pseudoscience relying on the photos that Reijgwart had given Calmeyer to prove his likeness to his daughter.

In 1943, Reijgwart provided Calmeyer with proof that he was Fleijsman’s true father, but he dismissed it.

“It was because of Calmeyer that two men one day came to take me away,” Fleijsman told EO and the journalist and historian Els van Diggele. “And we all know where that journey ends.”

Fleijsman, who has suffered psychological trauma that has haunted her for decades, didn’t tell anyone about the ordeal until 2018, her three sons said. She converted to Catholicism and had her sons baptized for fear of further persecution. She and her husband, who was not Jewish, did not tell their sons their mother was Jewish.

“We knew our mother went through something terrible during the war. That’s all we knew growing up,” one of Fleijsman’s sons, Henny, has said in interviews. “We first heard the name Calmeyer a few months ago for the first time.”

In recent years, Fleijsman has told her sons more about her past, and they now consider themselves Jewish. One of them, Ron, had a Star of David tattooed on his chest, along with the number that the Nazis tattooed onto his mother’s arm at Auschwitz.

The family is now protesting plans to build a museum for Calmeyer in Osnabruck, his native city in Germany. Fleijsman’s sons staged a protest in there in December, handing out flyers reading “No honors for Calmeyer.”

Henny, Fleijsman’s second son, is aware that many Jews are alive today thanks to Calmeyer, but that doesn’t outweigh the negative for him.

“It doesn’t matter to me how many people he saved if he put our mother on a transport to Auschwitz. To me that man is a murderer, as bad as all the others,” Henny told EO and Van Diggele.

Van Diggele published a Dutch-language book about Fleijsman’s case that she worked on with the team behind the documentary. Both the book and the film are titled “Femma’s Riddle: A Rescuer’s Prey,” and they have ignited the first public debate about Calmeyer’s legacy.

“The world wants to be lied to, and prefers hearing about a rescuer than someone who sent people to their deaths,” Van Diggele wrote in the book. 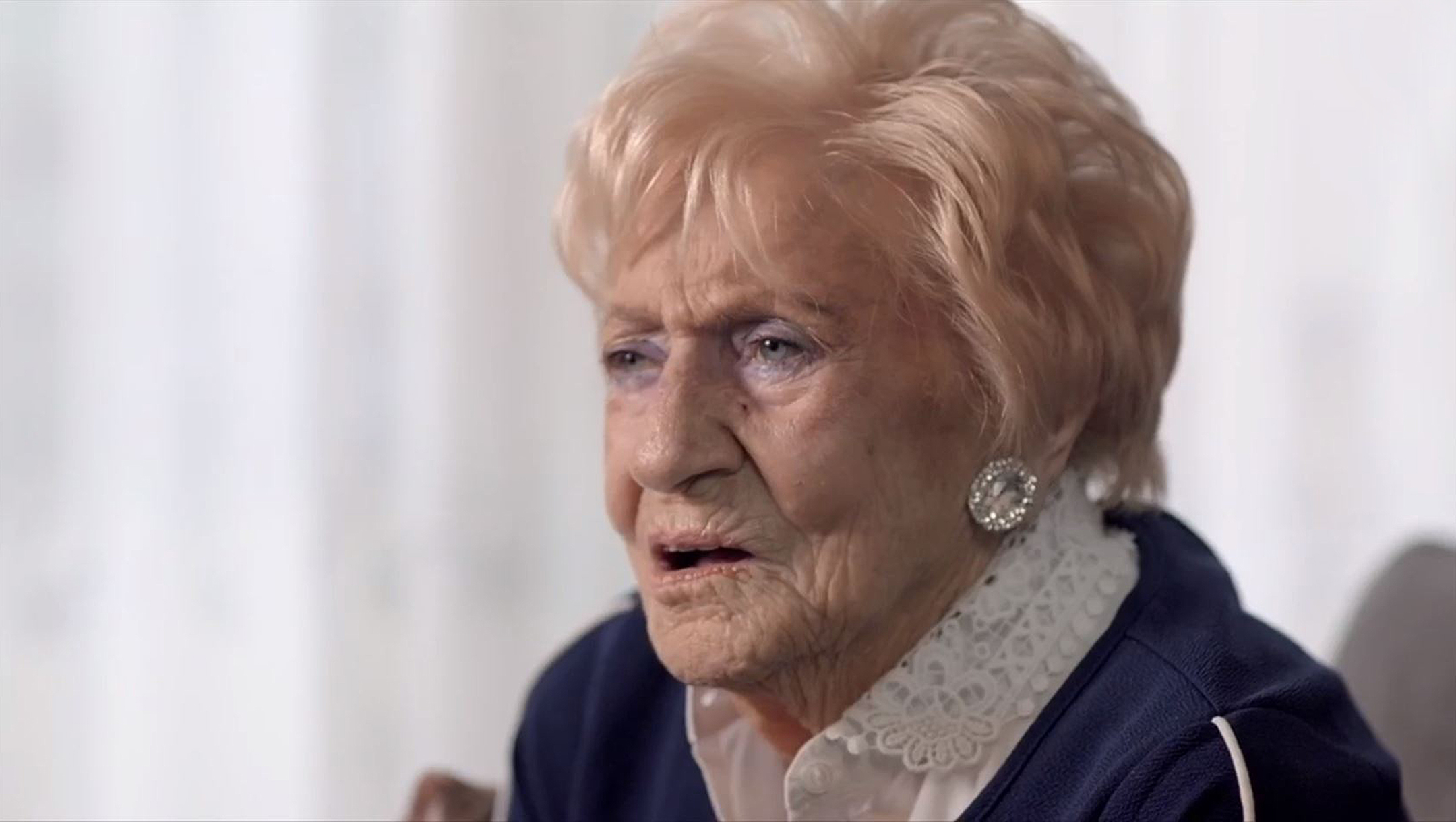 Femma Fleisjman talks about her deportation to Auschwitz in a 2018 interview with the EO television channel. (Courtesy of Jewish Programming EO)

But Yad Vashem, Calmeyer’s advocates in Germany and those saved by Calmeyer see things differently.

Laureen Nussbaum, who is the same age as Femma Fleijsman, was saved along with her half-Jewish mother thanks to Calmeyer’s decision to label her mother an Aryan, she told JTA last year in an interview about a book she wrote celebrating his actions.

“So much has been made out of Schindler, who saved 1,200 Jews, and people really empathize with him and made him a hero,” Nussbaum said, speaking of the German factory owner immortalized in the Oscar-winning film “Schindler’s List.” “And I felt that Hans Calmeyer, who has saved more people, is too unknown in the world.”

Calmeyer approved about two-thirds of more than 5,000 appeals sent to his office, including some rather shaky ones, according to Petra Van den Boomgaard, a historian whose doctoral thesis on Calmeyer served as a basis for a Dutch-language book she published last year, titled “Not a Jew to the Nazis.”

Oskar Back, a well-known violinist, declared in his appeal that three of his grandparents were baptized “immediately after their birth,” according to her research. Calmeyer, who multiple historians say was under growing scrutiny by his suspicious Nazi superiors, not only said that Back’s story was credible, but defended it when Back attempted to reclaim his possessions from a bank used by the Nazis to steal Jewish properties, Van den Boomgaard wrote.

To Van Diggele, these interventions neither put Calmeyer in danger — a requirement for the Yad Vashem recognition — nor vindicate his other actions.

“Calmeyer operated within the system and was part of it from almost the beginning until the very end,” she said.

The unit Calmeyer headed in 1943 registered some 500 people as Jews whom it determined were mistakenly considered Aryan, according to Van Diggele. Those people never approached Calmeyer’s office, she told JTA.

When Calmeyer reviewed Fleijsman’s case, it was also audited by Ludo ten Cate, a Dutch anthropologist who was a member of the NSB Dutch-Nazi party, and another member of that movement working with Calmeyer. Van den Boomgaard told JTA that this made it much harder for Calmeyer to be lenient with Fleijsman.

She said Van Diggele “is angry and basically using Femma’s wartime story to express that at the expense of a facts-based narrative.”

As the debate about Calmeyer has grown — Yad Vashem told EO that it will review the new material relevant to his case — a journalist for the eminent Dutch daily NRC Handelsblad attempted in an article  on Calmeyer last month to reconcile the divergent accounts about his actions.

“Every now and then, Calmeyer had to sacrifice a Jew” to be able to save others, Joep Dohmen wrote.

That sounds like a reasonable interpretation to Alfred Edelstein, the director of the Dutch-Jewish television channel that made the documentary on Fleijsman. But, if true, it requires a closer look at the people Calmeyer chose to sacrifice, Edelstein said.

Many of those rescued by Calmeyer were Germans who fled to the Netherlands in the 1930s — like the parents of Nussbaum, the survivor who wrote a book celebrating Calmeyer’s actions. Some were famous, like Back. In general, Edelstein said, they tended to be “well-to-do, educated, cultured.”

“But what we hadn’t heard, at least not until Femma stepped forward, is the testimonies of common Jewish people — the vast majority of of Amsterdam’s Jewish population: vendors, corner bakers, carpenters, raggers, the daughters of window washers,” Edelstein said. “Almost none of them survived to testify. Maybe it’s because they weren’t ‘important’ enough to rescue.”