Tending wounds and distributing supplies: Minneapolis Jews care for a city in turmoil 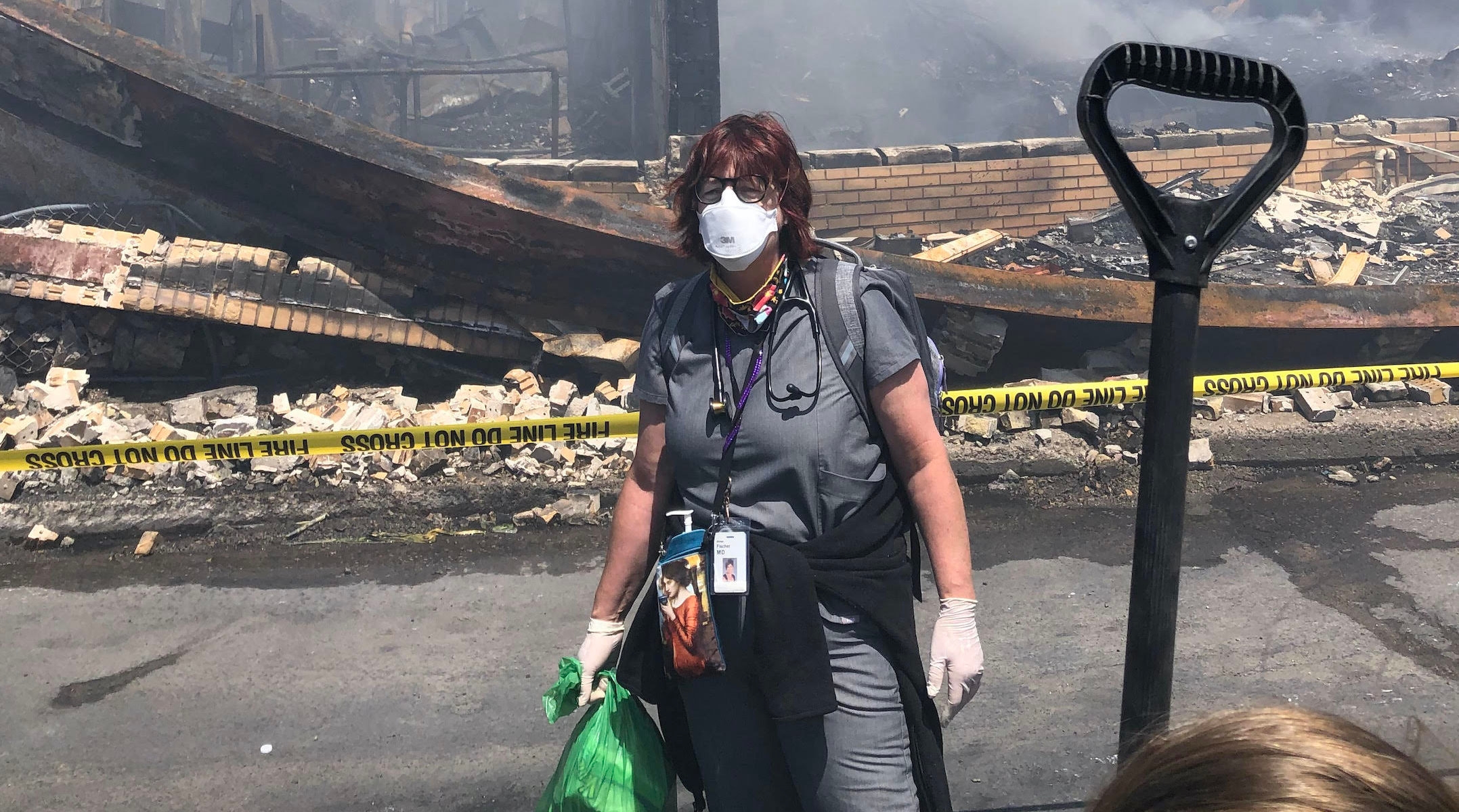 (JTA) — Dr. Vivian Fischer spent five hours Saturday walking toward Minneapolis’s devastation from her home in a suburb immediately outside the city. The family physician put on gray scrubs, her stethoscope, a mask and gloves, filled a backpack with whatever she had at home — extra masks, medical gloves, asthma inhalers, bandages, tweezers to pick glass out of cuts and water, and went to see where she could help.

She found countless people sweeping up the glass on the streets from storefront windows broken in the chaos of Friday night’s rioting. Others were, as volunteers, boarding up the store and office windows that had been shattered. Some 200 buildings in Minneapolis were destroyed in the destructive mayhem.

“We are all reeling. I woke up feeling despair. It was really hard to get out of bed,” said Fischer, 58. “None of the big groups were forming an organized response because it was too unsafe.” A doctor friend called her suggesting that they go into Minneapolis to see how they could help.

“I’ve always been informed by the Jewish ethic to go where I’m needed,” Fischer said, and inspired by her childhood rabbi, Andre Ungar, who marched with civil rights leaders in Selma and spent time in the Birmingham jail. Ungar died in May, at age 90.

The former EMT said that what she ended up doing was what any Jewish mom could have done: cleaning out and bandaging up people’s cuts, most of them acquired while they were sweeping up the broken glass. She also lay in the street with a distraught Somali Muslim man, convincing him to move out from under the wheels of a fire truck.

“There were no medics or doctors” in the area, she said, and the closest open urgent care clinic was a 25-minute drive away. “It is horrifying to see my city burned, and to smell it.”

The city has experienced widespread destruction and looting in the nights since George Floyd, who was African-American, was killed on May 25, when a white Minneapolis police officer knelt on his neck for more than eight minutes.

Demonstrations began as angry protests against the police but spiraled into something fueled by more indiscriminate anger.

The destruction has been so widespread that the Minneapolis Jewish Community Relations Council urged rabbis to remove Torah across from their synagogues in case their buildings were attacked. So far, none has been, though right before the first protests started, anti-Semitic graffiti was discovered on a bus stop bench across the street from Congregation Shir Tikvah.

While Fischer tended to people’s wounds, Dave Snyder was standing in the parking lot of Minneapolis’s El Colegio High School, directing people dropping off food and fire extinguishers, and others who were picking them up to distribute to families in need.

Thirty cars filled with food and supplies would soon be distributed in Minneapolis’s Latino neighborhoods and at Little Earth, an apartment complex housing roughly 1,000 Native Americans. A fire had been started by an unknown arsonist Friday night and the complex was without electricity for most of the day.

By Saturday’s end some 100 cars had pulled into the Spanish-language charter high school parking lot to drop off trays of lasagna, baby food and non-perishable food, which was also distributed to families of El Colegio students, many of whom are not eligible for federal pandemic assistance or unemployment insurance and are “living in the shadows,” said Snyder, 44. Many of the volunteers were members of his synagogue, Congregation Shir Tikvah, he said.

Thirty fire extinguishers were donated by people who bought them at hardware stores in nearby suburbs. They were distributed to several groups doing neighborhood defense, Snyder said.

Snyder’s day job is as director of organizing at Jewish Community Action, a Minneapolis-based organization working across faith lines on racial and economic justice issues. But he was gathering food and fire extinguishers as a volunteer member of Shir Tikvah, a Reform synagogue.

Aaron Silver, a member of Conservative congregation Beth Jacob in St. Paul, took his two children, ages 9 and 12, to board up the front of a beloved local bakery Saturday afternoon. Among the more than 200 buildings burned and smashed in Minneapolis have been two gas stations near his home, his favorite Bangladeshi-Indian restaurant, Gandhi Mahal, “and my post office was burned to the ground,” said Silver, who works as an artist and a website designer.

Silver, 43, compared what is happening in his neighborhood to how Syrians must have felt “watching their normal lives become a war zone.”

Snyder said he is motivated to help protect the most vulnerable in his city because he is a Jew. “We are literally trying to protect our city from being lit on fire,” he said.

“It’s an extremely desperate and traumatizing situation,” Snyder said. “The only thing I’m holding fast to is that many of us are seeking each other out and looking for ways to help board up buildings and share food in neighborhoods where every grocery store has been burned to the ground or boarded up. It feels good to be doing this as part of Shir Tikvah and the Jewish community.”