A California synagogue memorialized Judah Benjamin, the Confederacy’s most prominent Jew. Here’s how that changed. 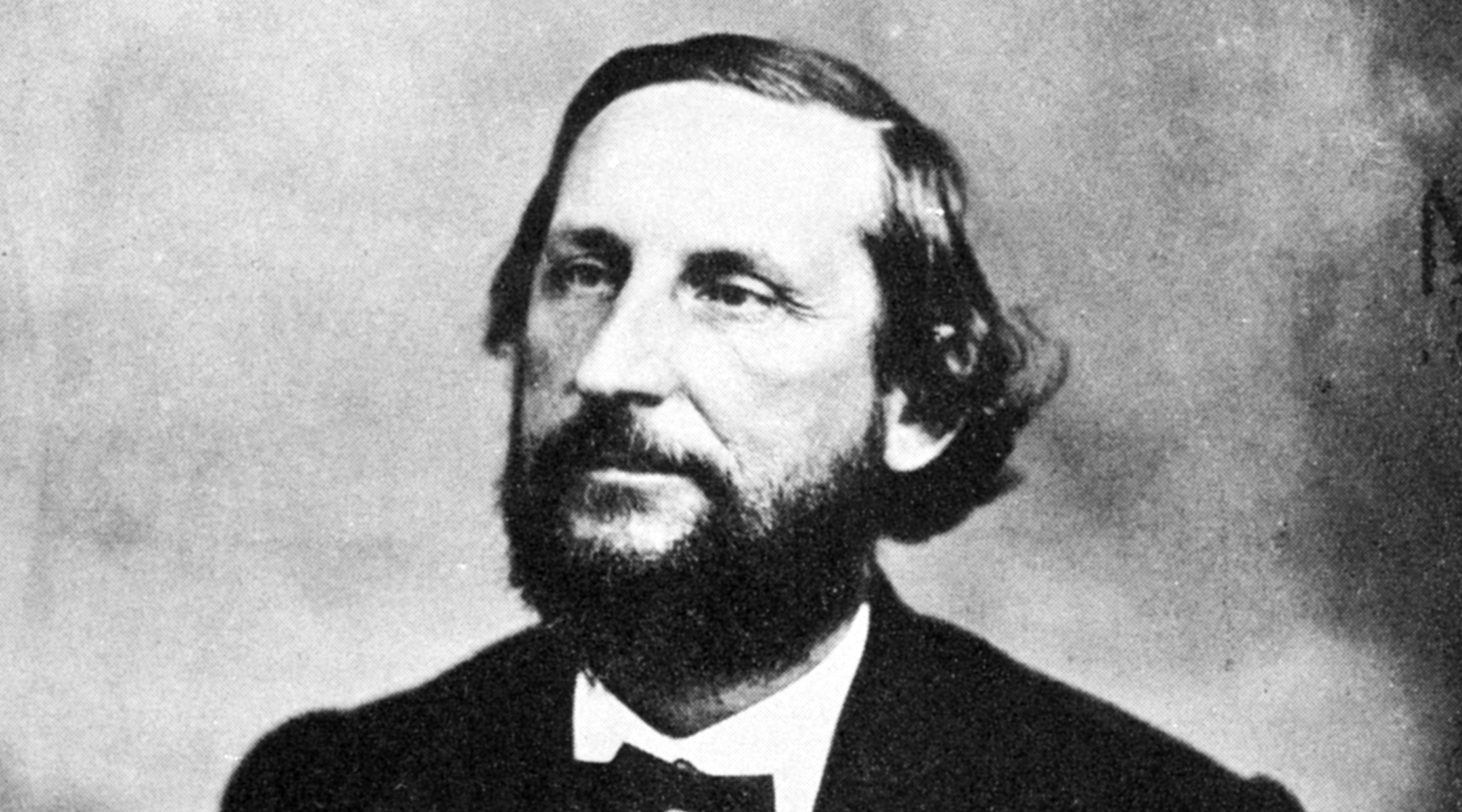 Judah Benjamin, seen here in 1855, served in Jefferson Davis' Cabinet during the Civil War and was the Confederacy's most prominent Jew. A synagogue in California included his name on a window memorializing significant Jewish figures. (The Print Collector/Print Collector/Getty Images)
Advertisement

(JTA) — About 15 years ago, a large synagogue in Northern California installed a set of windows in the religious school engraved with the names of some 175 prominent Jews, from biblical figures to famous actors.

One of them, sandwiched between Zionist leader Vladimir Jabotinsky and former Federal Reserve Chairman Alan Greenspan, was Judah Benjamin, the most prominent Jewish official in the Confederacy. Benjamin, who enslaved 140 people on a Louisiana sugar plantation, served variously as the Confederate attorney general, secretary of war and secretary of state.

The inclusion of Benjamin’s name on the wall didn’t arouse much protest until 2013, about eight years after the installation at Peninsula Temple Sholom, a Reform congregation in Burlingame. That was when a congregant named Howard Wettan listened to a podcast about the Civil War as his daughter attended Hebrew school in the building.

“I connected the dots,” Wettan said. “I saw the name once more and said there’s something really wrong with that.”

Wettan launched a years-long campaign that coincided with a national reckoning over Confederate monuments and eventually persuaded the synagogue to grapple with the name’s significance. Benjamin’s name is now covered in tape and will be replaced, along with two other names, later this year.

“The first handful of times I noticed it, I wasn’t sensitized,” Wettan said. “It was just an historical artifact and I didn’t place a lot of meaning behind it.”

Wettan’s complaint brought a version of a much larger debate over national historical memory to a synagogue far from the former Confederate States.

Across the country, Confederate monuments have drawn challenges for years from people who say they glorify those who enslaved Black people and fought against the United States. Defenders of the monuments, including some white Southerners, have argued that the monuments are necessary to teach about a painful moment in American history.

But the statues that memorialize those leaders were largely erected long after the Confederacy was defeated, many in the 20th century in support of white supremacy at a time when Southern governments were fighting to maintain legal racial segregation.

A poll released Wednesday shows that a majority of Americans favor taking down those monuments. Protesters over the past few weeks have pulled down monuments on their own, as others did during demonstrations in years past.

Peninsula Temple Sholom did not put Benjamin’s name on the window to glorify white supremacy. The idea was to include names of significant figures from all corners of Jewish history, according to the synagogue’s chief community officer.

“I believe the original intention was to create a wall that was somewhat educational,” Karen Wisialowski said. “It hasn’t really served that purpose.”

Wisialowski added: “Having names of folks on our wall to a viewer would feel as if these were people that we were admiring and expressing pride in, and ultimately that’s why we decided to take the names down.” Relatively few memorials to Benjamin exist — as opposed to, say, the plethora of monuments to Jefferson Davis or Robert E. Lee. But Peninsula Temple Sholom is not alone in Jewish history when it comes to honoring the Confederacy’s most senior Jewish official.

In the late 19th and early 20th century, according to Jewish historian Shari Rabin, there was a general American tendency to “paper over” the worst aspects of the Confederacy, as well as a general interest in the war. Jews of that time, she said, celebrated Benjamin in that context, including by publishing a children’s book about him.

In the decades after the Civil War, “there was a general celebration of service, and Jews want to write themselves into that history,” said Rabin, a professor of Jewish studies at Oberlin College. “There’s a history of Southern Jews and also American Jews more broadly using Judah Benjamin as a way to show Jewish contributions and to make a claim to Jewish belonging.”

Benjamin’s role as a leader of a white supremacist rebellion was the main problem with that approach, Rabin said, but it wasn’t the only one for specifically Jewish memorials. Benjamin’s opponents tarred him for his Judaism, but he never really embraced being a Jew. He married a Catholic woman, raised his kids Catholic and was not involved in Jewish institutions. He fled to the United Kingdom after the war.

“By the time of the Civil War, he was pretty far removed from organized Jewish life or personal Jewish commitment,” Rabin said. “The people who were calling Benjamin a Jew were the people who didn’t like him.”

At first, Peninsula Temple Sholom responded to Wettan’s complaint by doubling down on the wall as a teaching tool. Wettan would come to religious school classes and teach the students about Benjamin and the Civil War. But after the August 2017 far-right rally in Charlottesville, Virginia, which was sparked by the removal of a Lee statue, Wettan again asked the synagogue to erase Benjamin’s name.

After some back-and-forth, Wettan requested at a synagogue board meeting in December 2018 that the name be removed. In the end, a task force was formed to address the issue, and Benjamin’s name was covered up with tape. Some months later, the synagogue began the process of contracting an artist to replace the name.

“There was a lot of concern about how we’ve got names literally etched in glass and someone who we think is perfectly fine on the list today we might not think is fine on the list tomorrow,” Wisialowski said. “Should we pull the whole wall down? Should we pull them down and recognize that we might need to make changes in the future as well, if issues come to light that are counter to our values as an organization?”

In the end, the congregation opted to keep the wall but replace three windows bearing what they deemed to be problematic names at a cost of approximately $7,500. Along with Benjamin, the congregation is removing the names of Rabbi Shlomo Carlebach, a prominent Jewish musician who died in 1994, and the actor Dustin Hoffman. Both Hoffman and Carlebach have been accused of harassment and assault by several women, in Carlebach’s case posthumously.

The congregation has taken the new windows as an opportunity to include more women’s names. The names will be replaced by those of the biblical figure Deborah, the prominent Jewish musician Debbie Friedman and Regina Jonas, the first woman to be ordained as a rabbi.

(Asked whether the windows also included the name of Woody Allen, the filmmaker accused of child sexual abuse, Wisialowski said, “Amazingly, no.”)

“If an issue pops up again, if lots of issues pop up again, then we will have to also handle them based on our values, which are really, really clear about the kind of organization we want to be and the kind of message that we want to put into the world about the importance of individuals and social justice and equality,” she said.

Looking back, Wettan says the years-long process gave the congregation an opportunity to articulate its values and come to a deliberate decision. It also showed him, he said, how fraught it can be to deal with historical memory and an engraved memorial.

“It’s easy for someone in Northern California to look at the South and say that’s them, not us,” he said. “It’s hard to change. To change, you can’t be afraid to acknowledge that maybe you didn’t get something right the first time.”