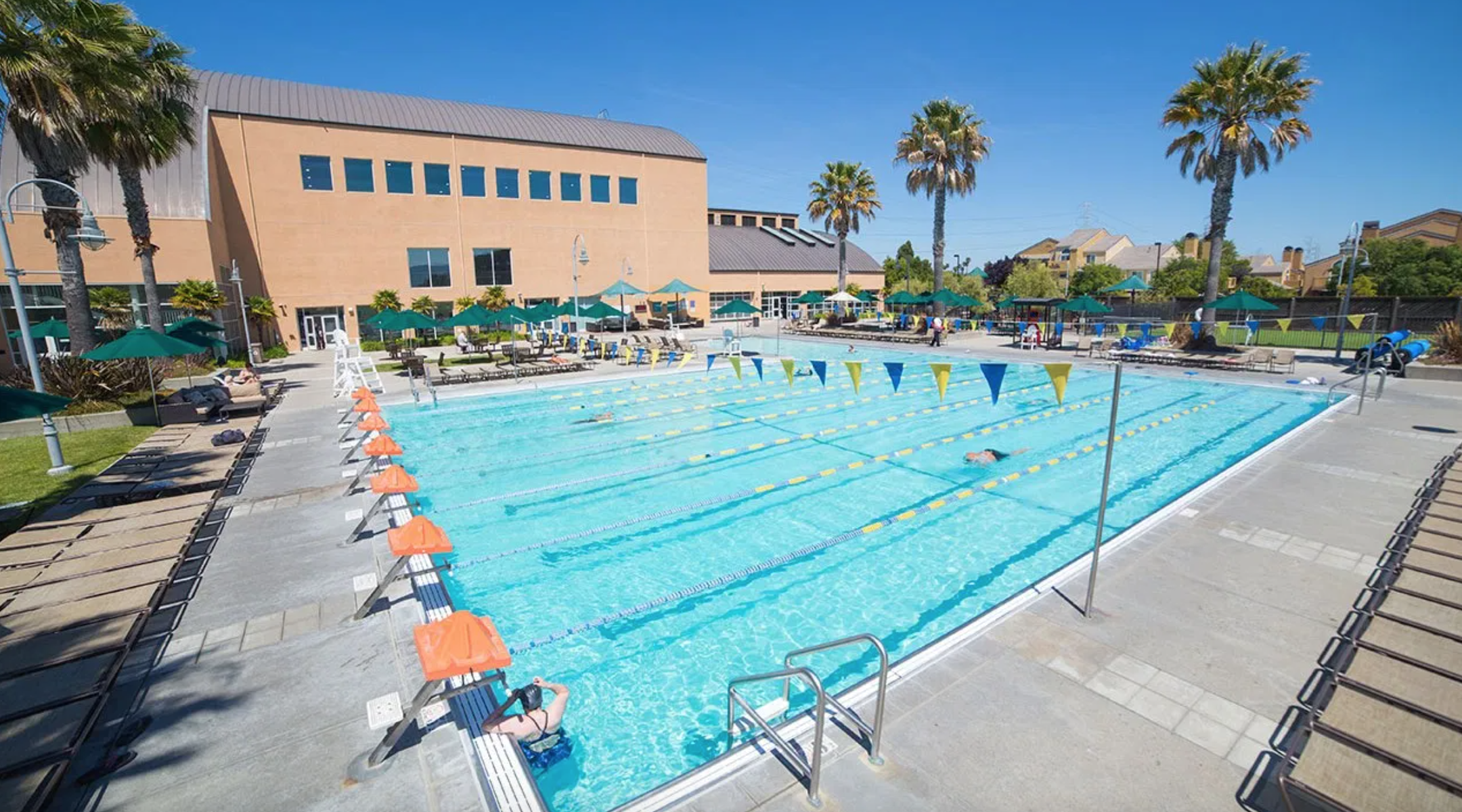 The Peninsula JCC’s fitness center and pools are expected to open in early July. (Courtesy of PJCC)
Advertisement

(J. The Jewish News of Northern California via JTA) — The bad news for Jewish community centers in the wake of the coronavirus crisis continues: One in Palo Alto has laid off about 2o percent of its staff and cut its budget by a third, while one in Foster City, located between Palo Alto and San Francisco, has cut its budget by 45 percent.

Sitting on more than 8 acres in Palo Alto, the Taube Koret Campus for Jewish Life — which includes the Oshman Family JCC and the Moldaw Residences for retirees — has been described as a “modern eco-oasis” and a “hub for the region’s growing Jewish community.”

The campus’ design, which has won architectural awards, features groves of palm and olive trees, meticulous landscaping with nods to Jewish and Israeli heritage, and outdoor sculpture.

The JCC also boasts an indoor pool (with a slide and water park), an outdoor lap pool, a 9,000-square-foot gym and a gleaming, glass-fronted culture and arts hall.

But like other JCCs in the Bay Area and nationwide, the OFJCC saw its revenues from its health center and programming all but disappear in the last four months as a result of the coronavirus pandemic. With the future uncertain, the organization is looking at significant cutbacks, and on June 22 announced layoffs of about 21 percent of its workforce and the indefinite suspension of a host of programs.

“I never could have imagined what we’ve all experienced these last three months,” CEO Zack Bodner wrote in an email to the community announcing the cuts, with the subject line “A Difficult Announcement.” He said the period has been “tremendously challenging” and “an emotional roller coaster of ever-changing information.”

The pandemic closures eliminated 99 percent of the OFJCC’s anticipated earned revenue from March through June, Bodner said, “a gap that donations alone cannot cover.” Much of the lost revenue was from fitness center memberships.

Looking at the upcoming fiscal year, which begins July 1, the JCC will have to shave its budget by a little more than one-third, from an anticipated $29 million — second only to the JCC in San Francisco — to roughly $18 million. It announced layoffs or “substantial” reductions in hours for nearly 60 employees (not independent contractors) working directly for the JCC. 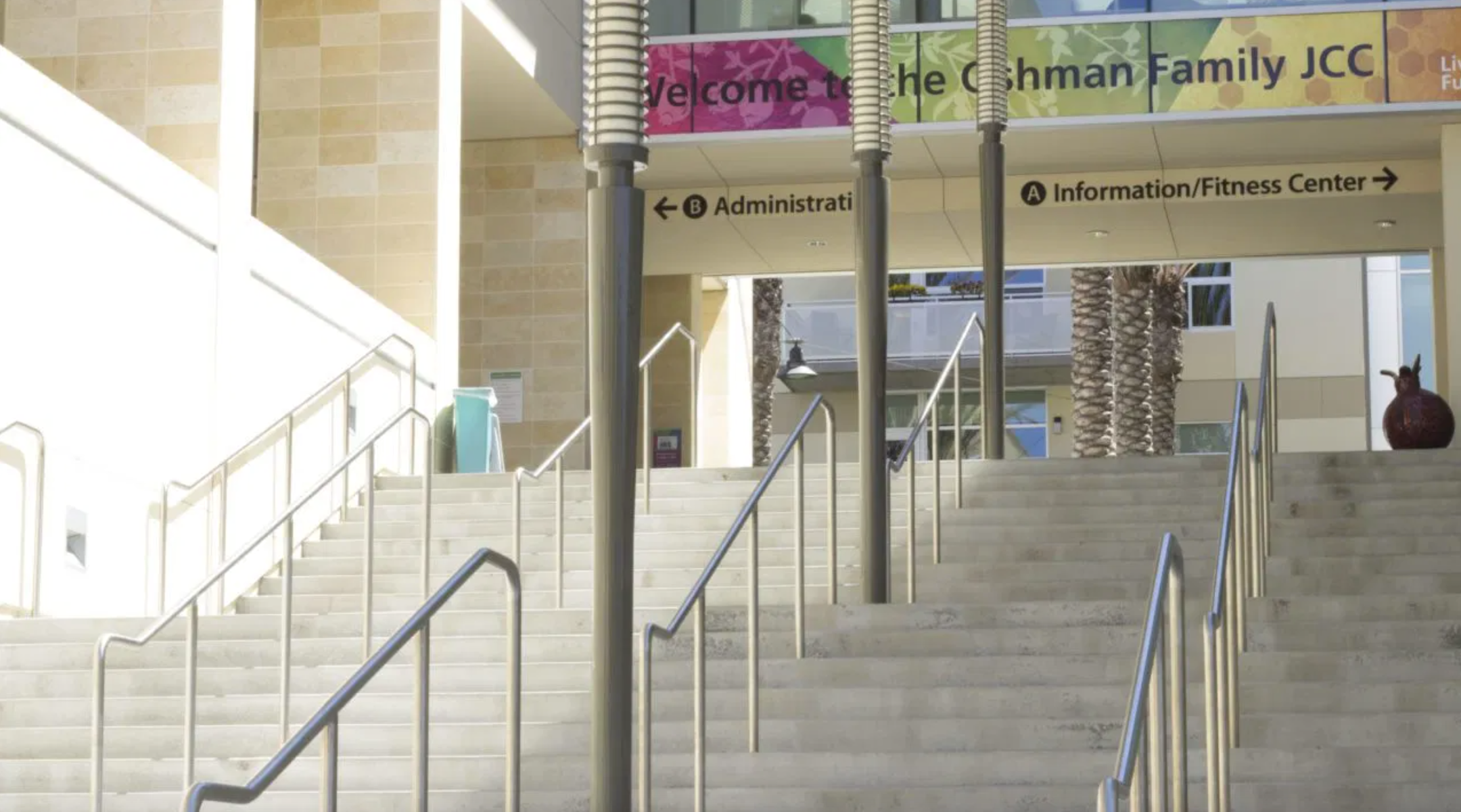 The empty entrance to the Oshman Family JCC in Palo Alto, which closed its facility in March due to the coronavirus pandemic. (Courtesy of OFJCC)

Senior management will be taking pay cuts of “between 10 and 40 percent” next year, the organization said.

Bodner, CEO since 2013, often wears his emotions on his sleeve. In an email in March announcing hundreds of furloughs, he called it “the most painful message I have ever had to send.”

Meanwhile, leaders at the Peninsula JCC, one of the three largest in the Bay Area, are looking at upcoming budget projections and grimacing at an anticipated $9 million shortfall.

“We’re looking at deep and painful staffing cuts, and cuts to services and programs,” CEO Paul Geduldig said in a phone call, echoing JCC of San Francisco CEO Marci Glazer when she announced layoffs of about 150 staff members. Geduldig said management is “still working through” how many will need to be laid off in Foster City.

The PJCC, which had close to 10,000 members before the pandemic hit and employed about 380 full- and part-time workers, was forced to close its doors in mid-March along with community centers across the country.

A $1.8 million Paycheck Protection Program loan, a $175,000 grant from the S.F.-based Jewish Community Federation and other fundraising efforts buoyed the JCC temporarily in the intervening months; it will finish the fiscal year on June 30 with only a small deficit.

“It could have been catastrophic, going three months without any revenue” from the fitness center, which accounts for about 60 percent of annual earnings, Geduldig said. “We’ve been working hard to look for additional resources.”

But projections for next year, beginning in July, are “where we see the difficulties,” he added.

Before the pandemic hit, the PJCC was projecting around $20 million in revenue for the next fiscal year, primarily from gym memberships and preschool tuition, which together account for about 85 percent of earnings. Other revenue comes from afterschool programs, summer camps and philanthropy.

The fitness center and pools are expected to open in early July after San Mateo County recently announced that gyms could reopen.