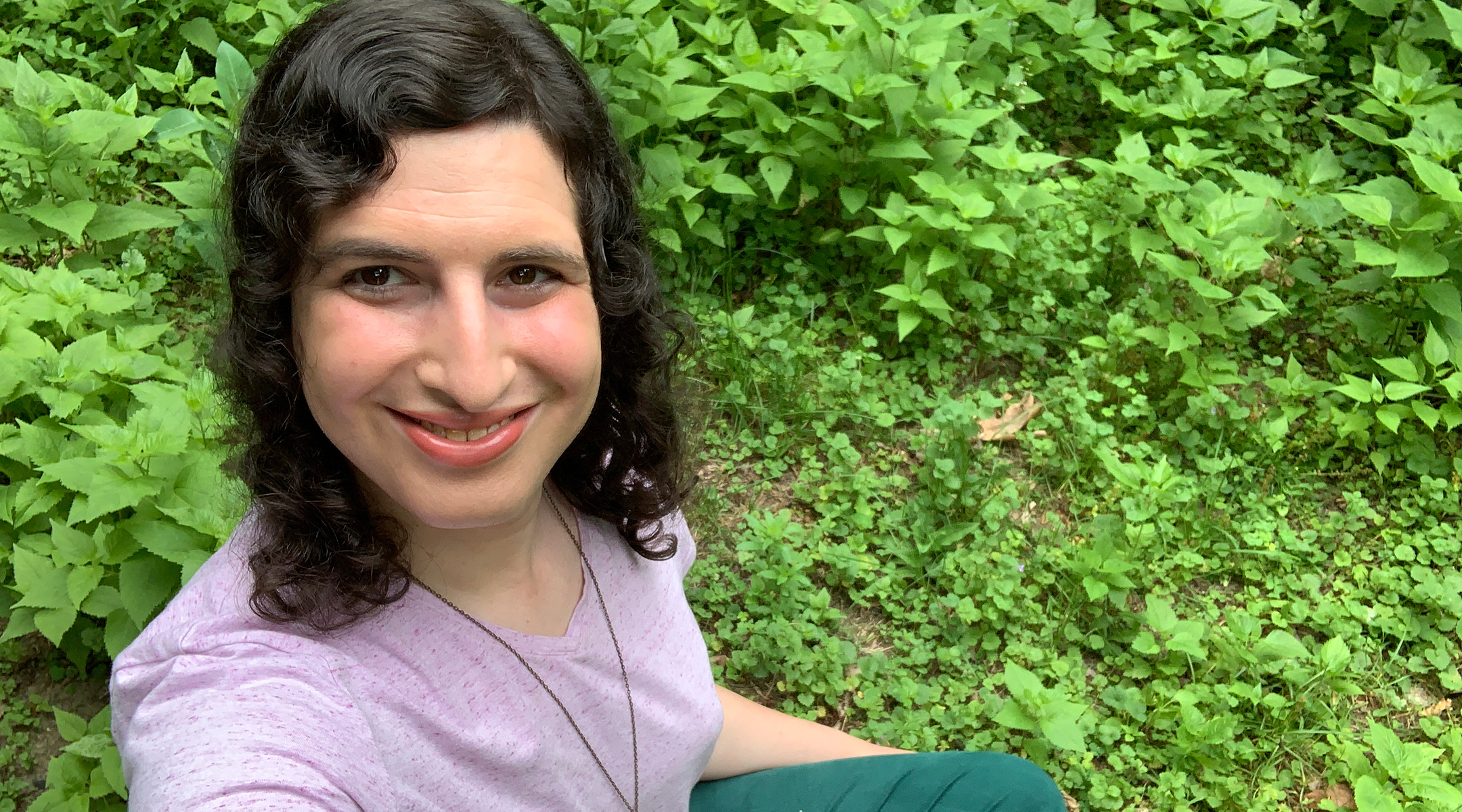 Samantha Zerin struggled with her gender for years before coming out as transgender. (Courtesy of Zerin)
Advertisement

(JTA) — Samantha Zerin headed home from a Yiddish class she had taught as part of her synagogue’s adult education program on the evening of Dec. 19 and knew her life was about to change. That evening, the 775 families at Temple Emanu-El would be getting a message that she knew would surprise some of the people she had gotten to know since joining the community 3 1/2 years earlier.

“Over the past several years, Sam has been exploring Sam’s gender identity,” read a message sent to the congregation from Samantha and her wife, Rachel. “This has been a journey for both of us, full of introspection, learning, and growth. Through this journey, we have come to realize that, although Sam was raised as a boy, she is in fact a woman, and she is ready to begin living her life publicly as such.”

The email marked the culmination of a years-long process in Zerin’s life — a rebirth, almost, from the gender identity in which she had been raised to the full expression of the one she had come to understand had always been inside her.

It also marked a significant moment for American synagogues: Rachel Zerin is the associate rabbi at Temple Emanu-El, a Conservative congregation in Providence, Rhode Island. Samantha Zerin had looked into whether there were any other spouses of congregational rabbis who transitioned whom she could contact for support. She wasn’t able to find any.

The 33-year-old Yiddish and music teacher and poet had already shaved her beard, grew out her hair and come out as trangender to her wife, family and close friends. Now she would announce herself as a rebbetzin.

“The rabbi’s spouse is a very public figure, and everywhere I go in our community, people know who I am,” Zerin said. “It’s kind of tongue in cheek to say there are eyes everywhere, but there really are, whether I go to the gym or I’m at the grocery store.”

Rabbis’ spouses occupy high-profile roles in Jewish community. Traditionally the rabbi’s wife, or rebbetzin, would not only cook for Shabbat and holiday dinners but teach classes and offer advice to the women of the congregation. That has changed in the non-Orthodox world, where people of all genders can now become rabbis, but the role of a rabbi’s spouse remains a prominent role, said Shuly Rubin Schwartz, a historian and the incoming chancellor of the Jewish Theological Seminary.

“It’s certainly true that rabbis are public figures, and there’s this also kind of sociological term of rabbis being symbolic exemplars — they’re supposed to live out the values that everyone else is in theory aspiring to live towards — and often the rabbi’s family could get caught up to that set of expectations,” said Schwartz, who has done research on the role of the rebbetzin.

Because of all of this, Zerin knew that her coming-out process needed to happen carefully. On the one hand, she knew that acceptance of transgender people outside the Orthodox world has become widespread. The Reform, Reconstructionist and Conservative movements all adopted resolutions supporting the full inclusion of transgender people in Jewish communities in the past five years, and transgender people — like other members of the LGBTQ community — are gaining greater visibility and increasingly taking on leadership roles in synagogues and other community institutions. 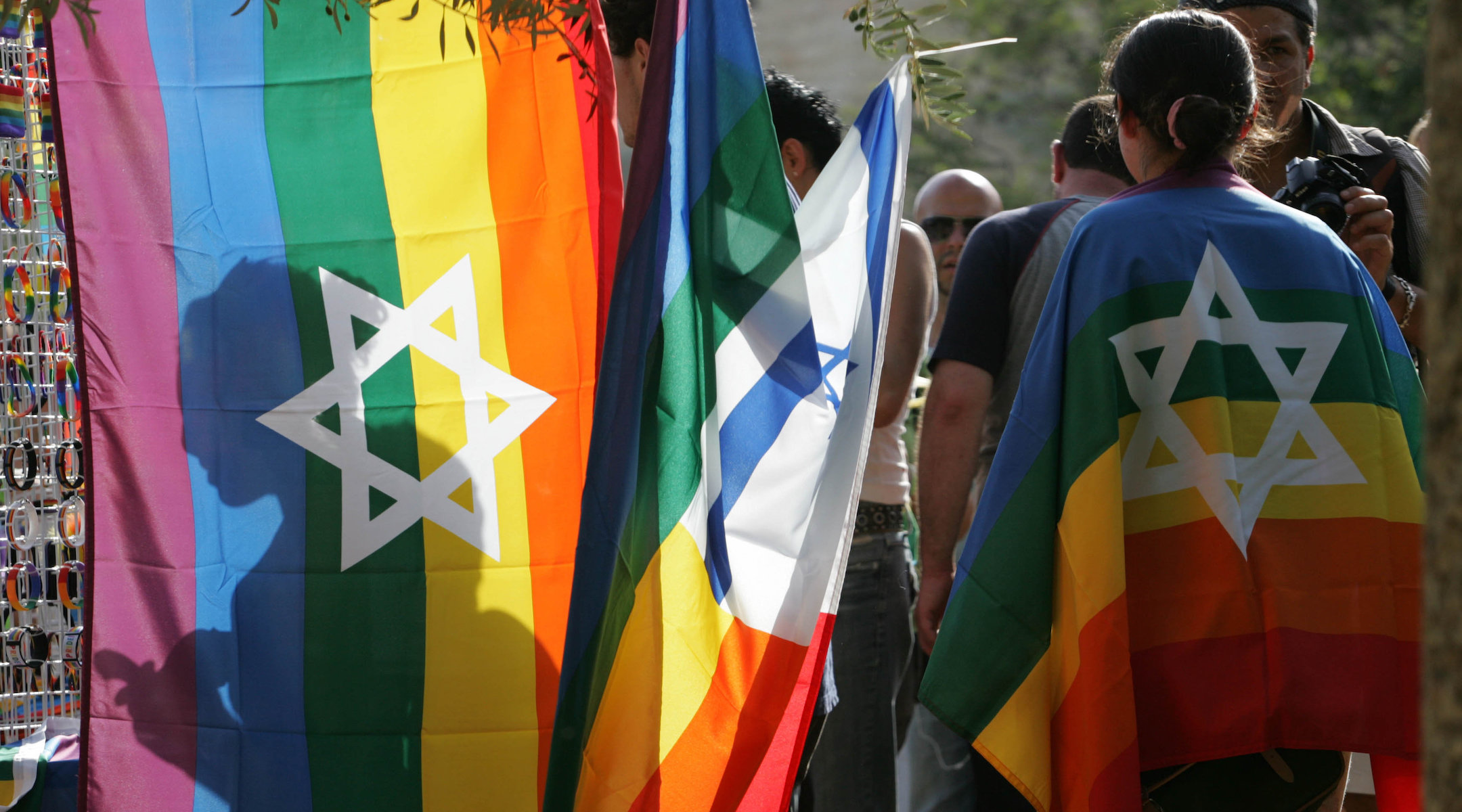 On the other hand, Zerin knew her transition ceased to be a private matter because of her family’s role in the community.

“When I came out as transgender, as a woman, then all of a sudden that meant that one of rabbis of this community, who is a woman, is now married to a woman and that’s a big deal,” she said. “So in a sense, when I came out as trans, I was coming out as myself, as a woman, and forcing my wife along with me. And for that reason, it had to be a dialogue with my wife about when we would do this, and also with the leadership of the synagogue.”

The message to the congregation shared Zerin’s new name and pronouns and said congregants “may also notice changes to Sam’s clothing and appearance.” But in order to maintain privacy, the couple also asked congregants not to ask them personal questions or offer unsolicited advice.

As a rabbinic family, the line between public and private is frequently blurred, but it was important to maintain some privacy, Rachel Zerin said.

“The lines of what is my public life are very different than for most professionals, in the sense that many aspects of my family are public life,” she said. “Pre-pandemic times, we had people over for Shabbat dinner, and showing what we do in our home to community members is part of my role as a rabbi and I embrace that, but there are still boundaries.”

Samantha Zerin’s coming-out was many years in the making. Raised as a boy, she never felt drawn to typically masculine things. With time, she also started feeling uncomfortable with her gender in general.

Zerin never considered that she might be transgender because the image she had in her mind of transgender women was one riddled with stereotypes.

”My models for transgender women were these characters in movies who would dress up and dance in secret, and then they would be found out and it would be embarrassing,” she recalled. “It was this really embarrassing thing and we were meant to laugh at them. The man in the dress is this stock figure in films for getting us to laugh.”

She began actively questioning her gender 2 1/2 years ago and last year saw a therapist specializing in gender identity for the first time. The first session was transformative.

“She gave me permission to admit to myself what I had been so afraid to admit, which is that that I’m transgender,” Zerin said.

She immediately came out to her wife, who she said was supportive. But it took seven months, and ongoing conversation with the synagogue’s leadership, before she was ready to send that email.

During that time, Zerin created a Twitter account and a blog using a female pseudonym, Shuli Elisheva. She would write about her struggles with her gender — including by writing poems in Yiddish, a language that she speaks fluently and is raising her 5-year-old son to speak.

Online, Zerin was able to find a community with other transgender women. She also found that writing in Yiddish resonated on an even deeper level as she felt a similarity between the language and her gender transition.

Writing under a pseudonym allowed her to express herself without worrying about how she would be perceived. Coming out to the community meant that layer of comfort was gone.

But in the end, her announcement was well received both by her own community and the larger Jewish community in Providence. A Facebook post generated hundreds of likes and comments responses, all encouraging, from people around the world and close to home

“If there is a specific way we can lend support in our community of which we aren’t already aware, just let me know,” one Temple Emanu-El congregant wrote. “See you Shabbos.”

“I was flooded with support. People really respected our request for privacy,” she said.

Rachel Zerin found that her worries about how the community would respond did not play out.

“There really haven’t been any issues,” she said. “I think all of the anxiety was self-created and the lead-up was much worse than the actual coming out, at least for me.”

Zerin hopes that showing her transition can help other transgender people struggling to come out. (Courtesy of Zerin)

The positive response in Providence’s wider Jewish community included Congregation Beth Sholom, a local Orthodox synagogue. The 100-household synagogue has around 10 people who have come out as LGBTQ in the last decade, which has helped shift community members’ views.

Still, for many members, Zerin’s coming-out was the their first experience grappling with the issue of transgender rights on a personal level, said Rabby Barry Dolinger.

“For a lot of people, it’s been their own process of actually coming to terms with the issue not on a national or political level, but on a human level. And that’s for how many people, hearts and minds are changed when it’s not an issue, it’s a friend,” said Dolinger, who emailed Zerin a few days after she came out to express his support.

At Temple Emanu-El, where Rachel Zerin works, her wife’s transition has helped push the synagogue to be more inclusive, said its senior rabbi, Michael Fel.

“For years, I think we’ve tried being a place that’s opening and welcoming and accepting of everyone, so I think the community was sort of primed for when she made her announcement — a lot of people said OK,” he said. “We understood that’s part of the people who are in our community, so I don’t think there were any challenges. But I think it did heighten a desire in our congregation for us to reevaluate bathrooms and reevaluate accessibility issues throughout the building.”

Though Temple Emanu-El has a one gender-neutral bathroom, the leadership is in the process of adding an additional one in order to accommodate those who may not feel comfortable going to the men’s or women’s rooms — something that in the past was true for Samantha Zerin.

Zerin said it was transformational for her to connect with other transgender women online and see how through hormone therapy they were able to appear feminine. She now hopes that she can inspire others in similar situations — including partners of rabbis, the people she was unable to gain counsel from during her own transition — and specifically asked for a photo of her before her transition to be published alongside one of her today to show others that it is possible.

“If I had known all of that 20 years earlier, who knows, I may have transitioned 20 years ago,” she said. “I was never aware it was a possibility, and how can you really long for something that you don’t even know is really a possibility?”