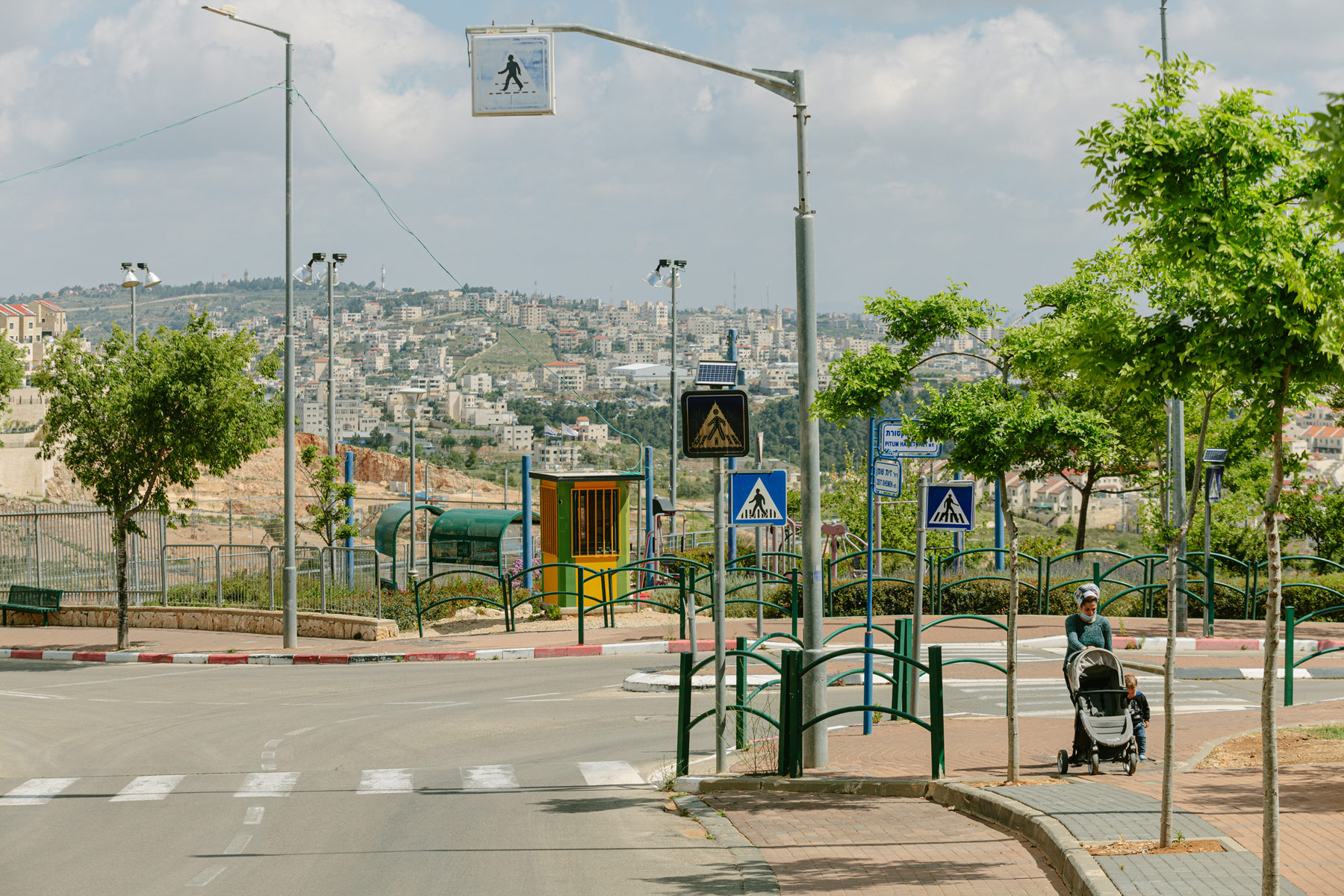 A woman walks with her child in the West Bank Jewish settlement of Efrat, April 26, 2020. (David Vaaknin for The Washington Post via Getty Images)
Advertisement

MITZPE YERICHO, West Bank (JTA) — It’s been surreal watching from Israel as Americans discuss my future. I’ve gotten used to presidents spending years developing plans for my neighborhood and other towns in Judea and Samaria, also known as the West Bank — they mean well and I truly appreciate their efforts. But recently I’ve been thrown by all the attention we’ve been receiving from the American Jewish establishment.

I’ve watched Zoom panels, Facebook Lives and read countless op-eds about my future and Israel’s annexation plan for parts of the West Bank. All the attention is gratifying, but I have noticed that many of the discussions, panels and debates have been missing some important nuance.

I’ve also noticed that many of these panels don’t include any speakers who are Jewish settlers or Palestinian residents of the area, which made it feel like I was watching an all-male panel discuss women’s issues or three white people discuss Black Lives Matter.

When I challenged one think tank about its 20-person panel that did not include a single Palestinian or Jewish settler, I was told that the discussions centered around security issues and a resident’s perspective wouldn’t be valuable.

But without a local speaker, these organizations are robbing their audience of the chance to hear a diverse set of opinions. Setting aside that security experts who live here are more familiar with the security challenges we face than former American security officials, their response shows a deeper flaw in how Americans view Israel and the region.

I watched a congressman who hasn’t visited a settlement in years — if ever — host an hourlong conversation about why it’s not in Israel’s interests to extend sovereignty over the West Bank. He authored a letter, and got 189 of his colleagues to sign it, which made the same points.

How can he dismiss the perspective of Israeli settlers if he hasn’t seen us or spoken to us? It’s as ridiculous as sitting in Israel explaining to Black Americans in Minneapolis that they have nothing to fear from their police department because I visited Minneapolis once eight years ago and I’ve read that their officers are trying to do the right thing.

The American Jewish establishment is missing nuance in four major areas: the history that led Israel to extend sovereignty over the West Bank; the effect extending Israeli sovereignty will have on Palestinians; our security challenges; and foreign relations.

Judea and Samaria are the heartland of the Jewish homeland. As I stand here writing, I’m looking out my study’s window facing Jericho and the Jordan Valley beyond. The Torah portion we will read this week, and many others, take place within the area I can see from my window.

Israel might one day decide a Palestinian state west of the Jordan River is in its interests, but that doesn’t change the fact that this area is historically Jewish land. The people of my town are proud to be today’s Zionist pioneers: Zionism aims to return Jews to their homeland, and by living here, we are fulfilling that objective.

Today’s pundits view the history of this place as only 70-100 years old. They vilify my neighbors and me as immoral settlers who have stolen Palestinian land. But I look at the past 3,000 years and imagine my ancestors walking these same hills. No matter what the State of Israel decides to do with this land, its Jewish history will never be erased.

More than this, however, the main reason Israel is extending sovereignty to this area is because the Palestinians have not offered a true partner for peace. I want nothing more than to have peace with my Palestinian neighbors, but try as Israel has, it’s proven impossible.

Hamas and the Palestinian Authority have chosen terror and rejected all peace offers without ever putting forth a reasonable counteroffer. Israelis have tried to achieve peace time and again, but the Palestinian leadership has refused at every opportunity. This week, the Palestinians made a mockery of negotiations by offering to come to the table – but only if Israel agrees to impossible preconditions. The American Jewish establishment doesn’t often grapple with this reality.

I’ve also seen many argue that annexation would put Israel’s Jewish and Democratic nature at risk and permanently deny Palestinians self-determination. This is the most egregious of false talking points.

As a rabbi, I care deeply about human rights. Palestinians and Jews were both created in God’s image and deserve to enjoy freedom and human rights. But contrary to so many erroneous voices, Israel isn’t causing anyone to lose rights they currently enjoy.

When people want to drive home a point about Israel they use fear, for fear is always a great accelerant. When President Trump announced that he planned to move the U.S. Embassy to Jerusalem from Tel Aviv, experts warned us that we’d experience violence in our area. Some panel discussions give the impression that Palestinian terror ended years ago, but Israel now faces existential security threats from all around us every day. Palestinians attempt an average of more than three daily terror attacks. As an American citizen, I receive State Department security alerts. About once a month I receive a warning that there will be violence in the West Bank.

I believe the Palestinian people are peaceful and want a high standard of living for their family just as I want for my family. Predictions of a rise in Palestinian violence should Israel go through with annexation are based on a view that Palestinians are incapable of reacting without violence. I don’t think of Palestinians this way and neither should you.

But in forming and expressing their opinions, American Jews have a responsibility to examine the issues in a comprehensive manner and ensure that their concern is both factual and expressed in a nuanced way. To do this, they should start by making sure to include people like me, who live in the areas that the international community is focused on, in the conversation.

Rabbi Uri Pilichowski
is the CEO and founder of Pilichowski Israel Educational Supply LLC, an educational company that brings quality and nuanced Torah and Israel education to high school and university students across the world.
The views and opinions expressed in this article are those of the author and do not necessarily reflect the views of JTA or its parent company, 70 Faces Media.