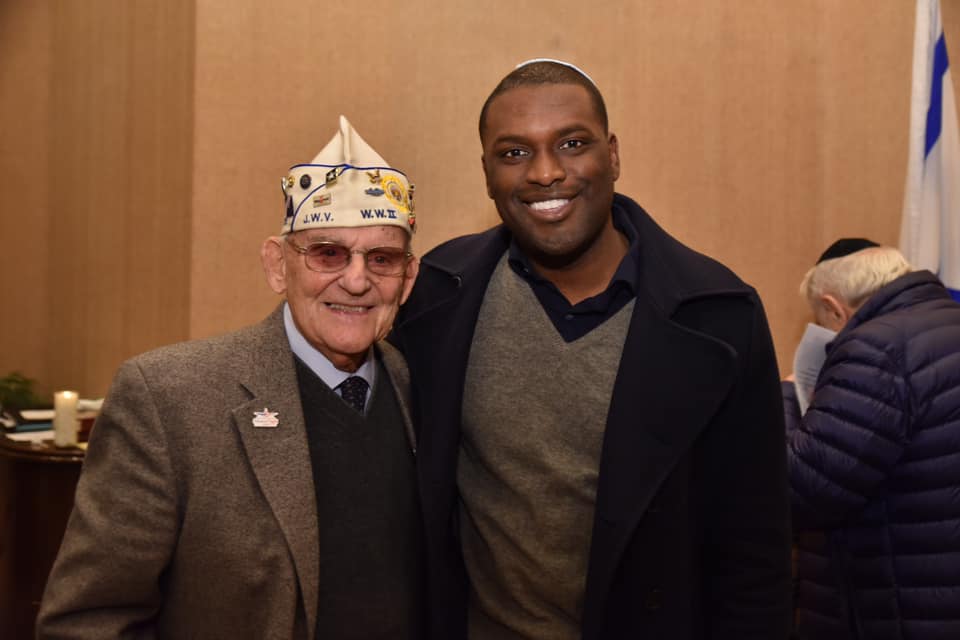 Mondaire Jones says that "Having been born and raised in Rockland County, I feel like I’m part of the Jewish family." (Courtesy of Mondaire for Congress)
Advertisement

(JTA) – From the very beginning, Mondaire Jones didn’t exactly fit the model created by Alexandria Ocasio-Cortez when she unseated one of the most powerful incumbent Democrats in the country.

Some might have thought he would. Running as a Black, gay man challenging a popular pro-Israel incumbent of 31 years not far from Ocasio-Cortez’s district certainly made him seem like a natural next member of “The Squad.” (Jones announced his run as a primary challenger to Nita Lowey last summer. Lowey later announced her retirement, opening the field to several other candidates.) But despite his progressive policy goals, the 33-year-old Jones sees himself as his own kind of leader.

“I am going to be an independent voice,” he said.

Unlike Jamaal Bowman, another New York progressive who unseated another staunchly pro-Israel incumbent, Eliot Engel, Jones did not seek the endorsement of the Justice Democrats, the progressive group that helped elect Ocasio-Cortez and supports progressive challengers to Democratic incumbents. (Jones held a seemingly insurmountable lead in the primary’s in-person ballots with 42.5% of the vote, but it may take weeks before the Rockland-Westchester district’s more than 65,000 mail-in ballots are counted, according to City&State.)

Nor did Jones, a lawyer by trade, see Israel as much of an issue in his primary campaign.

“I didn’t give people a reason to think that I would not be a friend to Israel,” he said.

We spoke with Jones about how he built his relationships with the Jewish communities in his district over the course of the campaign and how he hopes to repair and strengthen the Black-Jewish relationship. This interview has been edited lightly for length and clarity.

JTA: What lessons do you take away from your win?

Jones: That you have got to believe in yourself in politics to make the change that we desperately need in this country. And that is going to be required when you have the establishment pushing back against you. And people saying you’re too young or that you’re inexperienced because you’ve never held local elected office, or that you’re Black and gay and voters will never support you.

Do you see any themes across some of the New York races that have gotten a lot of attention?

I think voters are hungry for change. They are so disappointed with the status quo leadership. Not just in Washington, and not just with Republicans, but also with Democrats who are not giving voice to the lived experiences of the average American. You know, Congress is full of millionaires who don’t know what it’s like to struggle on top of not reflecting the kind of diversity — racially, ethnically, economically and even in terms of sexual orientation — that we would be better for having more of because those experiences inform our policymaking.

Elizabeth Warren is a big role model for me. I think she’s brilliant, she speaks with moral clarity and she’s pragmatic.

I’m going to be occupying my own lane. One of the things that has frustrated me a little bit is that because someone has endorsed my campaign that I’m going to take their position on Israel. One thing I want Jewish people to know is that I will be a friend to Israel and that my love for the Jewish community is a longstanding affinity. Having been born and raised in Rockland County, I feel like I’m part of the Jewish family.

Who are you thinking of when you say you don’t want people to get the wrong idea based on who has endorsed you?

I hear them saying he’s a progressive and he’s been endorsed by progressives. We know that progressives disagree on any number of issues, and the same way that some progressives say ‘I support Medicare for All’ or ‘I support a public option,’ there’s great diversity within the progressive movement and the topic of Israel tends to be something that divides progressives. Now don’t get me wrong, I want equal treatment under the law and humanitarian assistance for Palestinians, and my ardent support of a two-state solution is beneficial for Jews and Palestinians and the strategic interests of the United States. But it does disappoint me when I see some people suggest without evidence that somehow I’m going to be non-friendly to Israel. It’s just not true.

Did Israel come up more or less than you expected in the primary?

It came up less than I expected. J Street gave me its primary approval designation in the primary. (Note: J Street gave the designation, which is not an endorsement, to three Democratic candidates in the race, including Jones, Evelyn Farkas and Allison Fine.) It just did not come up all that often. I think it also didn’t come up because I didn’t give people a reason to think that I would not be a friend to Israel.

What’s at the top of your list of priorities for your first month in Congress?

If we are still dealing with this economic devastation and record unemployment, we have to be providing immediate cash assistance to families. I have said repeatedly that a one-time $1,200 check for a subset of the American people is a slap in the face, especially for families in Westchester and Rockland counties where it is extremely expensive to live. We also can be making progress on the ambitious goals that I have set forth in the primary, for example, that we can at least be expanding Medicaid and Medicare eligibility.

Something that I was critical of in the last CARES act – of course it went to die in the Senate like all good pieces of legislation – but it did not even include Medicare and Medicaid eligibility, and that was disappointing to me. And we know that over the course of 10 weeks, 40 million people lost their jobs in this country. And many of those jobs will not reappear even after we lift ourselves out of this pandemic, and that means that we can use this as an opportunity to create green jobs, invest in green technology and jobs training, and really obtain competitive advantages while we decarbonize our economy.

This week in an Instagram live conversation with Rashida Tlaib, Linda Sarsour said she told Jamaal Bowman that he had orders to do whatever the four congresswomen who make up ‘The Squad’ say, “no questions asked.” What do you make of that?

It sounds like she was joking based on what you just described.

But beyond the joking aspect of it.

What have you done to build relationships with the Jewish community in your district over the last year since you first announced your candidacy?

I’m so grateful to have tremendous support from the Jewish community which, as you know, is not monolithic by any stretch of the imagination. The leaders of the progressive movement in Rockland County are largely Jewish and they coalesced behind my campaign and propelled me to victory. And the same is true for the base of the activist community in Westchester, again largely Jewish, and that community coalesced behind me and propelled me to victory. I did as well in Westchester as I did in Rockland County, which is a great position to be in and I suspect will convey the message to anyone who would try to challenge me in the future that it would be a fool’s errand to try to do so.

I have been in conversation with rabbis in different parts of the Jewish community. I spoke to Michael Miller of the Jewish Community Relations Council in New York recently, I’ve spoken to Rabbi Yossi Menczer from Yorktown, he’s the head of a school there, I’ve spoken to David Kirschtel, who is head of the JCC of Rockland.

In the last year there have been some unfortunate new developments around anti-Semitism, including the Monsey attack in December in your district. How much did the issue of anti-Semitism come up in conversations with voters?

When I worked for Westchester County, I was the legal adviser to the Westchester County Human Rights Commission, where I worked closely with the members of that commission to formulate a response to rising acts of anti-Semitism and other forms of white nationalism in Westchester County. After the killing in Monsey, I penned an op-ed calling for the Black community to stand with the Jewish community, and historically that has been true. I talked about how during the civil rights era, for example, Andrew Goodman and Michael Schwerner lost their lives during the freedom rides. (Note: Goodman and Schwerner were Jewish freedom riders who were killed by members of the Ku Klux Klan.) I think I am uniquely able of the candidates who are looking to succeed Nita Lowey in Congress to build those relationships and strengthen those relationships because they have frayed, especially in Rockland County.

You and I spoke last year shortly after you declared your run for Congress and you admitted that the Orthodox community in your district wasn’t a big fan of yours. How do you win over the Orthodox Jews in Rockland County who supported Adam Schleifer?

They’ve already reached out to me and did so before the primary. I think it was clear to people in the final days of the race that I was going to decisively win this election. And here’s the thing, obviously leaders in the Hasidic community supported Adam Schleifer, but I’m not holding any grudges towards anyone. I’m going to be a representative for everyone. I’m going to meet with everyone and I’m going to represent everyone. People can vote for whoever they want to in a primary, that is a democratic process.

And when they reached out, what did they say?

They said that my opponents had tried to make me into a boogeyman but that they appreciated that I did not run a campaign in which I tried to vilify them in a way that other candidates historically have done. And I said thank you for your phone call, after I win the primary I will be representing you and all of us, and I will meet with you just like I meet with anyone else.