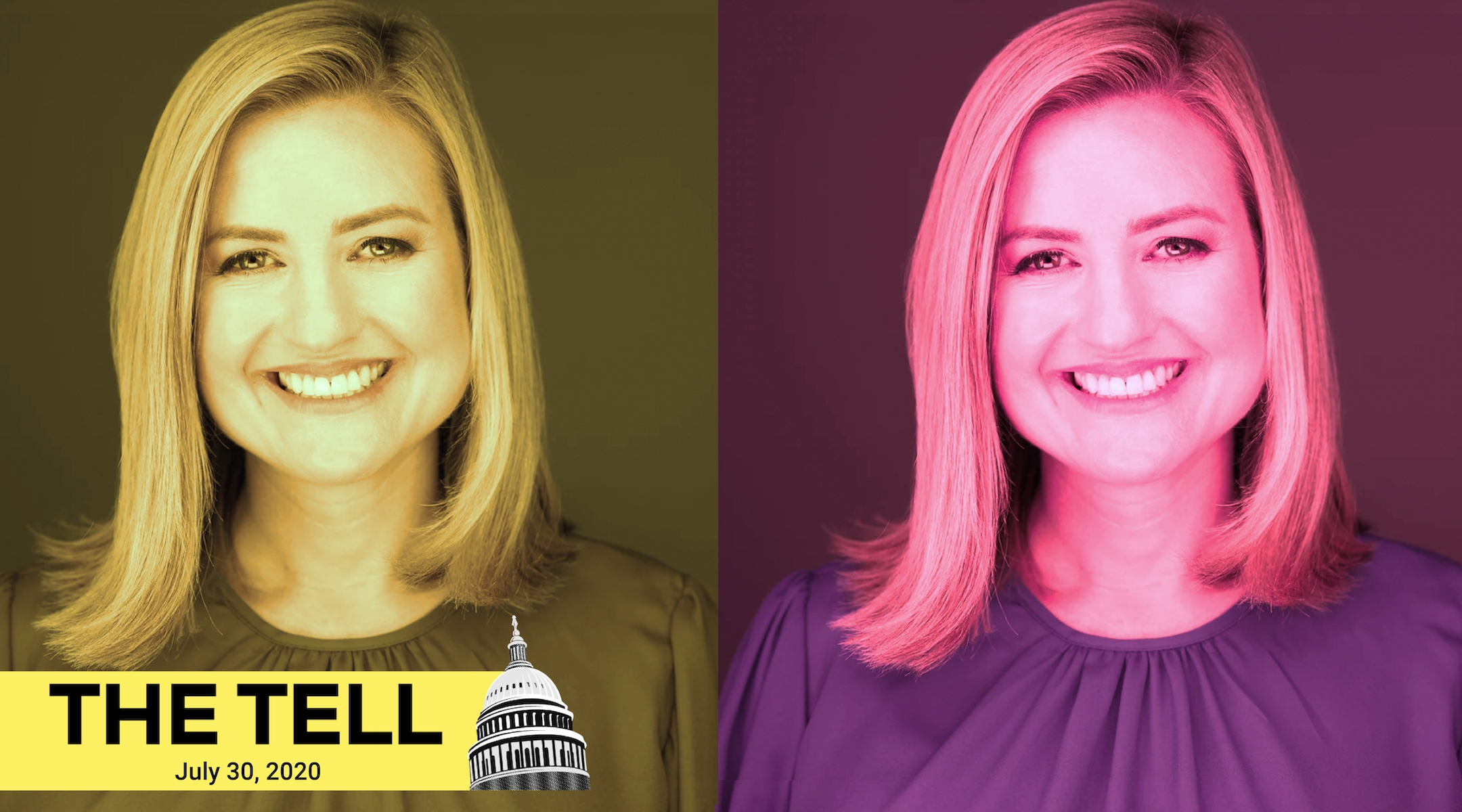 WASHINGTON (JTA) — I wrote this week about Phoenix’s young Jewish mayor, Kate Gallego, who is earning national attention for her calm pushback against efforts led by Republicans to diminish the importance of wearing facemasks.

Gallego, nee Widland, became a city planning geek as a kid with the help of the computer game Sim City (her imaginary city models included synagogues). She earned a degree in environmental studies from Harvard and served on the City Council before becoming mayor.

(And no, it didn’t make me feel at all ancient when she asked me if I knew what Sim City was, and I said “yes,” but then muttered a confession that I only knew because my nephew was an enthusiast. She laughed.)

Another inspiration, she told me, was her late grandfather, Michael Widland. Gallego, a single mom, named her son, born in 2016 (and omnipresent in her campaigning) for him. The mayor told me just two weeks ago that she was looking through photographs from her bat mitzvah in Albuquerque — she’s still in touch with her Hebrew school class — and lingered over photos of her grandfather.

“He was very community-minded and always said you are judged by how you take care of the entire community,” she said. “We talked extensively when we were coming up with [her bat mitzvah] speech and trying to understand the Torah portion.”

Gallego said she is proud of the Phoenix Jewish community for taking the lead in working with other communities to help the city endure the pandemic. The city’s JCRC joined a national Jewish public policy initiative to speak out against the flourishing of anti-Asian racism that marked the beginning of the pandemic.

More recently, Gallego’s rabbi, John Linder, has consulted with Gallego about setting up a network of COVID-19 testing centers in houses of worship.

“We’ve learned that you can reach more people if you go to trusted locations and have trusted partners, and for so many, the faith community is that trusted partner,” she said.

The Jewish Federations of North America hosted another informative online session this week on what to look out for in pending economic relief bills.

That partisan division makes the issue too radioactive to touch for Jewish Federations. The umbrella group’s CEO, Eric Fingerhut, would only say it was controversial and “I do not wish to wager a prediction on this one.”

“I’ll stake my predictive powers on other pieces of the bill,” he said.

There does not appear to be a specific set-aside for nonprofits in either bill. Jewish Federations is leading a push to set aside $60 billion in assistance for nonprofits.

Pro-Israel America, a nonprofit political action committee, is saying it “surpassed all expectations” by raising $2 million for its candidates this cycle — its goal when it was launched a year ago and three months before the election.

So how important is it to the PAC, which was founded by former top staffers of the American Israel Public Affairs Committee, to oust Rep. Ilhan Omar, the Minnesota Democrat who is one of two federal lawmakers to embrace the boycott Israel movement? Of the $2 million, a fifth, $397,000, was raised for her opponent, Antone Melton-Meaux, a pro-Israel progressive.

Republican Sen. David Perdue removed a social media ad that appeared to exaggerate the size of the nose of his Jewish opponent, Jon Ossoff. In the ad, which declares “Democrats are trying to buy Georgia!” Ossoff appears alongside the Senate minority leader, Chuck Schumer, also Jewish. The Republican Jewish Coalition has rallied to Perdue’s defense, saying he took down the ad as soon as he learned of the photo manipulation. The RJC is organizing a conference call for Perdue next week and describes him as a leader in championing Israel.

Israeli Prime Minister Benjamin Netanyahu likes to say he is under constant assault from the left. My colleague Sam Sokol shows that this time around, the flourishing of protests, triggered by the spike of coronavirus cases and Netanyahu’s legal troubles, covers the political spectrum. 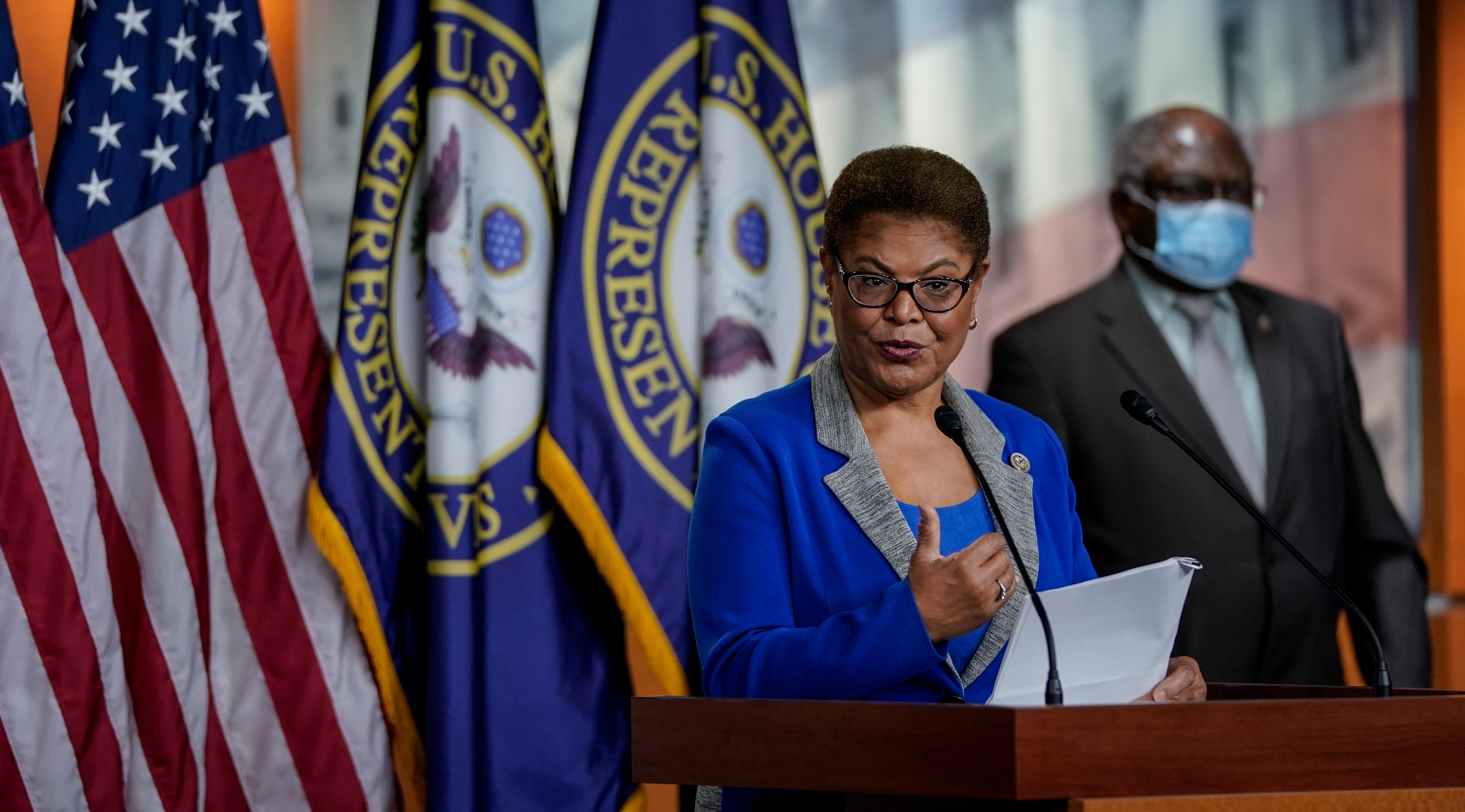 At Tablet, Armin Rosen examines the trajectory of California Rep. Karen Bass, from the radical left to contender for Joe Biden’s running mate. Rosen argues that her Fidel Castro-influenced   youth is exactly what propelled her into contention as a moderate endorsed by conservative columnist George Will.

“She wanted to solve problems in the community where she had spent her entire life, and then dedicated the next several decades to doing exactly that,” Rosen wrote. 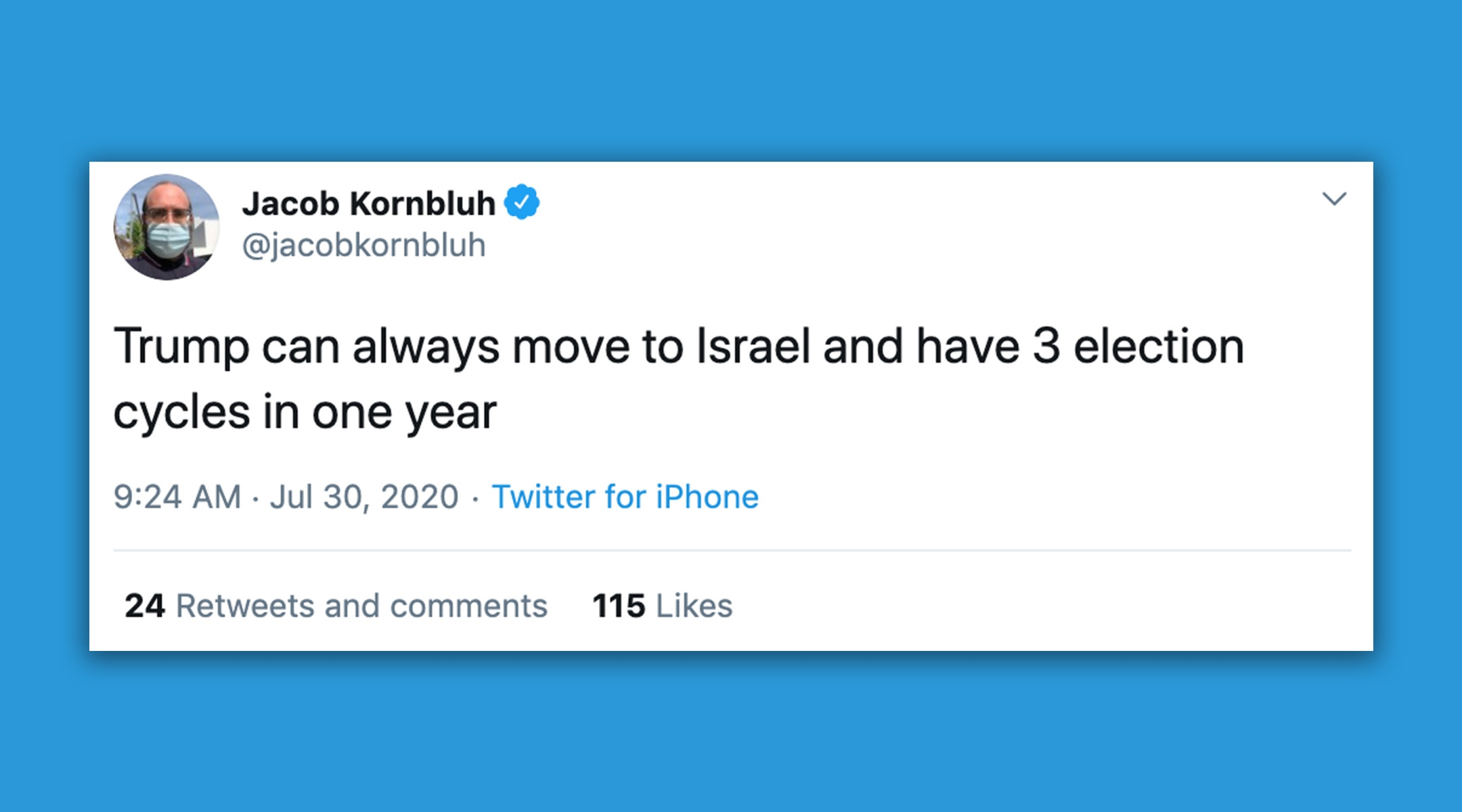 On Twitter, President Donald Trump suggested a delay in the Nov. 3 elections because of what he said will be confusion engendered by the coronavirus. Jewish Insider’s Jacob Kornbluh suggested that he look to one of his favorite countries that manages to get elections done, sometimes several times a year.