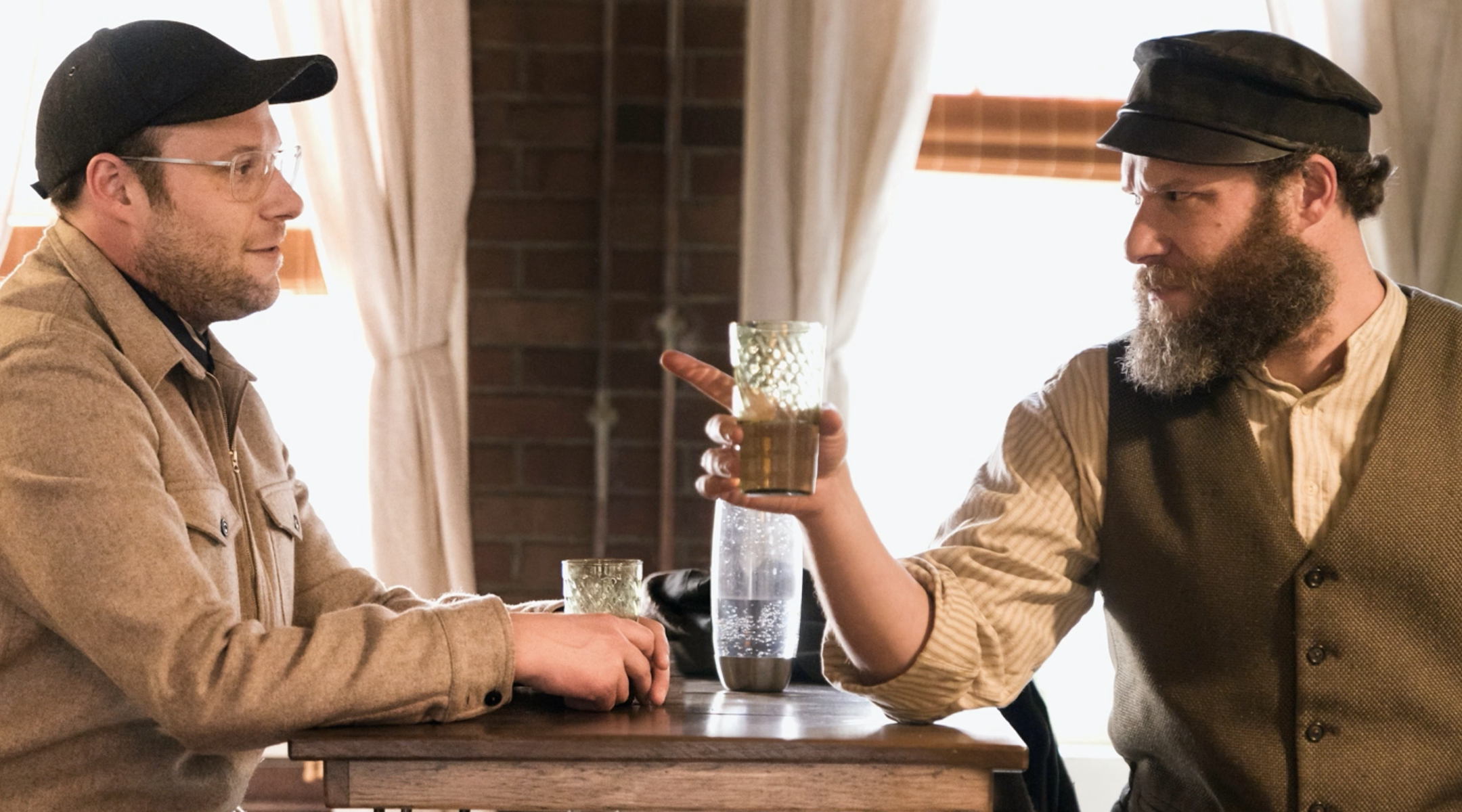 (JTA) — Seth Rogen’s “An American Pickle” is one of the most Jewish Hollywood films ever.

In it, Rogen plays two Jewish family members separated by a century: Ben Greenbaum, a young app developer who lives in Brooklyn, and Herschel Greenbaum, his great-grandfather from the old country who falls into a vat of pickles and stays perfectly preserved in brine for 100 years. Call it a pickle coma.

It’s all based on a New Yorker novella called “Sell Out,” published by Jewish writer Simon Rich in 2013.

The comedy is at heart a tale about Jewish legacy and identity — but its far-fetched premise also lets it play fast and loose with historical facts.

So how does the film compare to history, and to its source material? Let’s break it down.

Are Herschel and Ben Greenbaum based on real people?

Yes… and no. Simon Rich’s story is semi-autobiographical magical realism (even sci-fi?) — the main characters of the story are Rich himself and a fictionalized version of his own great-grandfather. (Rich’s father Frank is a prominent journalist who wrote for The New York Times for years and now writes for New York Magazine. Simon’s brother Nathaniel is a novelist.)

How does the movie compare to the original New Yorker story?

It’s pretty different in a lot of major ways. For one, in “Sell Out,” there aren’t many details of Herschel’s pre-U.S. life — he meets his wife Sarah in America. In the film, the viewer meets Herschel in a town named Schlupsk (more on that below), where he has the glamorous occupation of “ditch digger.”

In “Sell Out,” Simon is not an app developer, like Ben, but a screenwriter. (The real-life Jewish actor B.J. Novak even makes an appearance in the piece.) Rich’s dating life is also explored in the story in the way that Ben’s love life is not — Simon is dating a non-Jewish woman named Claire.

Nevertheless, fans of “An American Pickle” will highly enjoy “Sell Out.”

Is Schlupsk, the shtetl-type town in the movie, a real place?

There is a real town named Slupsk in the Pomeranian region of Poland — though there isn’t one called Schlupsk, with that “ch.” Back in Herschel’s time, the early 1900s, the real Slupsk was actually part of Prussia, which would become Germany. According to the POLIN Museum of the History of Polish Jews, the Jews of Slupsk lived a fairly peaceful life until the rise of Nazism in Germany.

In the short story, Simon Rich’s great-grandfather is also from Slupsk (no “ch”), which, as Simon proudly announces, is “near the Poland-Lithuania border.” That’s not where the real Slupsk is, and it becomes a joke — when Simon tells Claire where his great-grandfather is from, Herschel thinks to himself: “he is wrong, but I do not contradict him. He seems very proud of knowing this one fact about me.”

So it’s not clear that Slupsk and the town of Schlupsk in this movie are the same.

Who are these Cossacks that keep attacking Hershel’s village?

To Jews, the Cossacks are real-life villains.

Technically, the term refers to an ethnicity of Slavic Orthodox Christians that traces its roots to early Ukraine and Russia, although there were some Jewish Cossacks.

But Herschel’s aversion to them, which is played for laughs, isn’t that funny. The Cossacks formed their own autonomous states and are known for being militant — especially against Jews in the region. They enacted pogroms against their Jewish neighbors for centuries.

In 1919, when Herschel’s wedding to Sarah (which Cossacks attack) takes place, many pogroms took place across the lands of what are now Poland and Ukraine, as part of the Russian Civil War.

Herschel settles in Brooklyn. Did a lot of other Jews settle there during his time?

Yes. There were two big waves of Jewish immigration in the late 1800s and early 1900s, mostly those escaping the pogroms of Eastern Europe. By 1914, there were 1.5 million Jews in New York.

While originally many Jews settled in the Lower East Side of Manhattan, the opening of the Williamsburg Bridge in 1903 made it possible to live in Brooklyn yet work in Manhattan. Many Orthodox Jews moved to the borough, specifically to Williamsburg and Borough Park.

Herschel is surprised about cars and skyscrapers. Is that realistic?

As this New Yorker review points out, that is not likely — both cars and skyscrapers existed in the 1920s. While the Chrysler Building and the Empire State Building, New York’s two most iconic skyscrapers, were built in the 1930s, other skyscrapers already filled the New York skyline by 1920.

As for taxis, the New York Taxicab Company already had 700 vehicles driving passengers around the city by 1908.

Were there big pickle factories in 1920s New York?

Yes, pickles were huge in 1920s New York. The culinary tradition was largely brought over by Jewish immigrants from the old country, and they were sold all over Essex and Ludlow street in the Lower East Side — nicknamed the pickle district. The United Pickles Factory was founded in the city in the late 1800s. Guss’ Pickles, a famed Jewish pickle producer that still exists to this day but has since moved from the Lower East Side to Brooklyn, was started in 1920.

Seltzer was also big in New York of the early 20th century, and it was also brought by Jews. It was especially popular among the Jewish immigrants to the city and was nicknamed “Jewish champagne.” It was available at pharmacies and soda fountains, and through seltzer carts that filled the streets of the Lower East Side. The carbonated drink became especially popular during Prohibition.

The seltzer bottles in the movie are indeed realistic to the time period — but the way seltzer is otherwise treated is a little odd. Before Herschel is trapped in the pickle barrel, he longs for seltzer but can’t afford it. According to Haaretz, seltzer was actually the cheapest drink next to water. In fact, it had an apt nickname: “2 cents plain” — because if you bought it without any flavoring or additions, it was that cheap.