I spoke to Nick Cannon about anti-Semitism. This is what I learned. 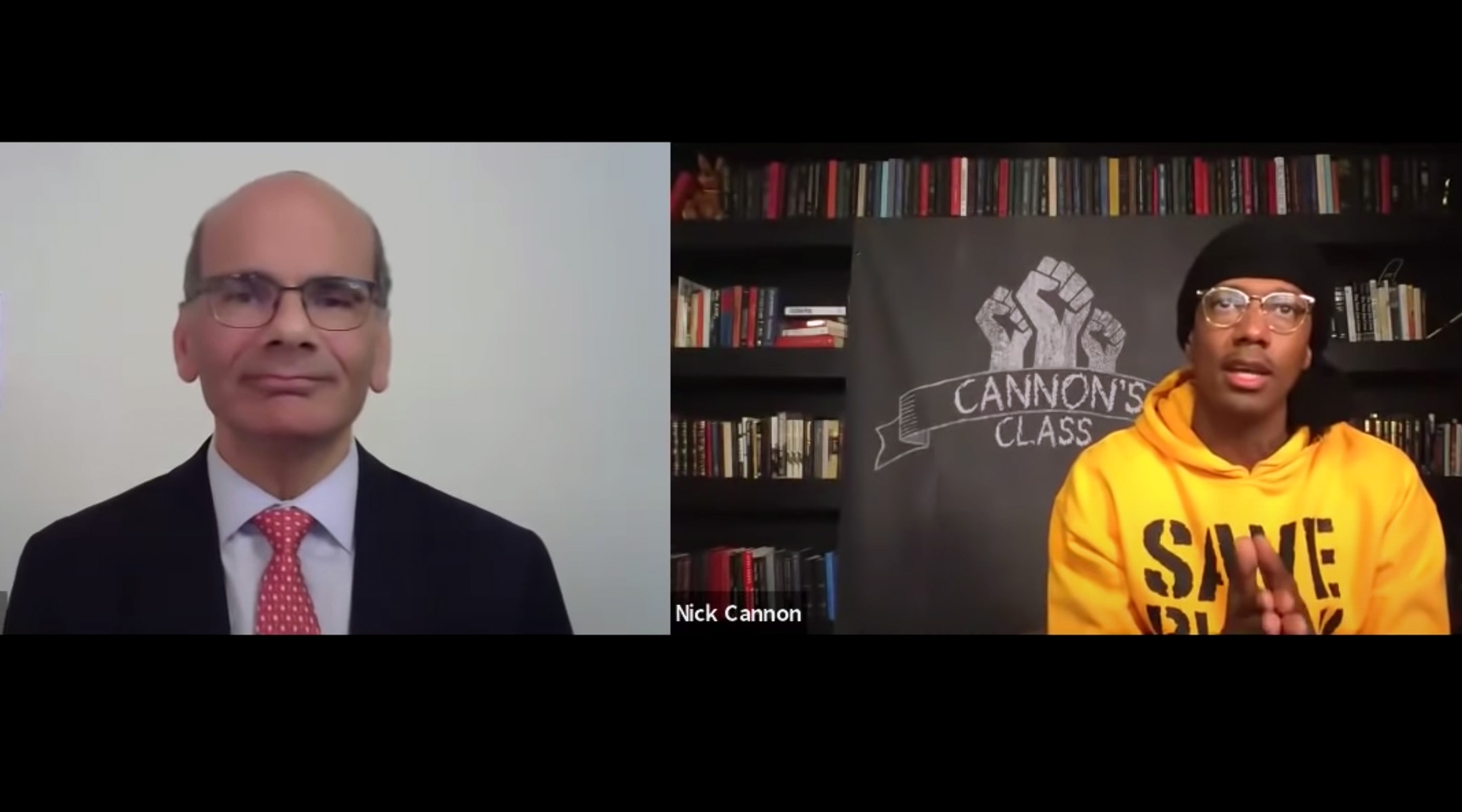 TEANECK, N.J. (JTA) — I did not know who Nick Cannon was until he said horribly hurtful things about my people. I now know that he is a very big celebrity, and enormous numbers of people listen to and respect him — that unlike some people who say hurtful things, he is not someone who can simply be dismissed.

More important, there was the possibility that something good could emerge from engaging with him — and it has.

In other incidents of celebrities expressing anti-Semitic comments, we have heard some utter a formulaic text expressing regret and a desire to grow. Cannon did not follow that pattern. While he issued a series of apologies in his own unique style, Cannon dedicated a good part of the past month to learning more about Jews and Judaism. He understands why his words were blatantly anti-Semitic and has begun the process of undoing the damage he has caused. The same perch that was used for evil is now used for good.

Along the way, Cannon started to follow the American Jewish Committee on social media as part of his education on all things Jewish. As a result, AJC met with him a few times. We felt confident enough about his journey to feature him with me on AJC’s online Advocacy Anywhere, his first appearance on a Jewish program.

But first, in our private conversations, I learned that Cannon is sincere, credible and curious — a lifelong learner. He did not knowingly hurt others. He is not interested in an overnight conversion, but rather a spiritual and intellectual journey. He does not go along to get along. He needs to understand and draw his own conclusions. Although he has strong beliefs, Cannon is willing to admit when he has been wrong. These qualities bode well for a process that is leading us to a better place.

Much coverage of our public conversation focused on what Cannon describes as a process of atonement. There was some disappointment and pushback when he rejected Louis Farrakhan’s hate speech but not the minister himself.

Some might find that automatically disqualifying in considering Cannon as a partner in the fight against anti-Semitism and racism, and in advancing Black-Jewish relations. But atonement is a process, and we believe that he has demonstrated enough credibility to allow the process to unfold.

Why is engaging with Cannon important? Something is awfully wrong and disturbing when a Howard University School of Divinity doctoral student, who is a celebrity with reach, erroneously believes the worst stereotypes and conspiracy theories about the Jewish people and mistakenly suggests that Jews usurped from Black people the name and culture of Hebrews and Semites. (There are no Semites, only Semitic languages, but that is a topic for another time.)

When his innumerable fans hear these anti-Semitic slanders, many believe the calumnies or have their own problematic ideas reinforced. But when Cannon changes his mind publicly because he unlearned falsehoods and learned truths — as he has — the same many will be educated by him and also may change their own beliefs.

Responsible Jewish leaders do not have the luxury of missing this opportunity. If we allow ourselves to be frozen in a cancel culture that does not give Cannon a chance to reach his people, we should be condemned by our people whom we are supposedly leading.

What, for example, does the process look like in this case? An example among many that could be cited: One can visit Nick Cannon’s social media platforms and read the latest of his series of book reports, including his recent reviews of Bari Weiss’s “How to Fight Anti-Semitism” and Simon Wiesenthal’s “The Sunflower: On the Possibilities and Limits of Forgiveness.” The positive impact of Cannonk teaching his “followers” in this way is incalculable.

One of his apology tweets, which both impressed and frightened me, encapsulates the issues before us:

It impressed me because it clearly states that he now knows that his sources were not “factual” and were nothing more than “hateful propaganda and stereotypical rhetoric.” It frightened me because it reveals the depth of our challenge.

It suggests that anti-Semitism is being used by some to elevate the Black community at the expense of the Jewish community. The Jewish people are being presented as a scapegoat that felicitously and erroneously explains the challenges facing African-Americans. These anti-Semitic tropes prevent all of us from addressing the true sources of racial injustice in America.

If Cannon is willing to help fix that disservice to American Blacks and Jews by exposing anti-Semitism for what it is, a hate that scapegoats, we must partner with him.

I welcome Nick Cannon as a new friend. We will learn from one another and open the window to go beyond that which originally brought us together and seize this opportunity to expand the conversation to the two-way street of Black-Jewish relations.

As this episode reveals, our communities have a lot of work to do. Success is not guaranteed but investment in Cannon — and others with reach who might unfortunately believe as he did — is well worth the risks.

Rabbi Noam E. Marans
is the American Jewish Committee’s director of Interreligious and Intergroup Relations.
The views and opinions expressed in this article are those of the author and do not necessarily reflect the views of JTA or its parent company, 70 Faces Media.