6 months into pandemic, Jews prepare for a High Holiday season of rupture and resilience 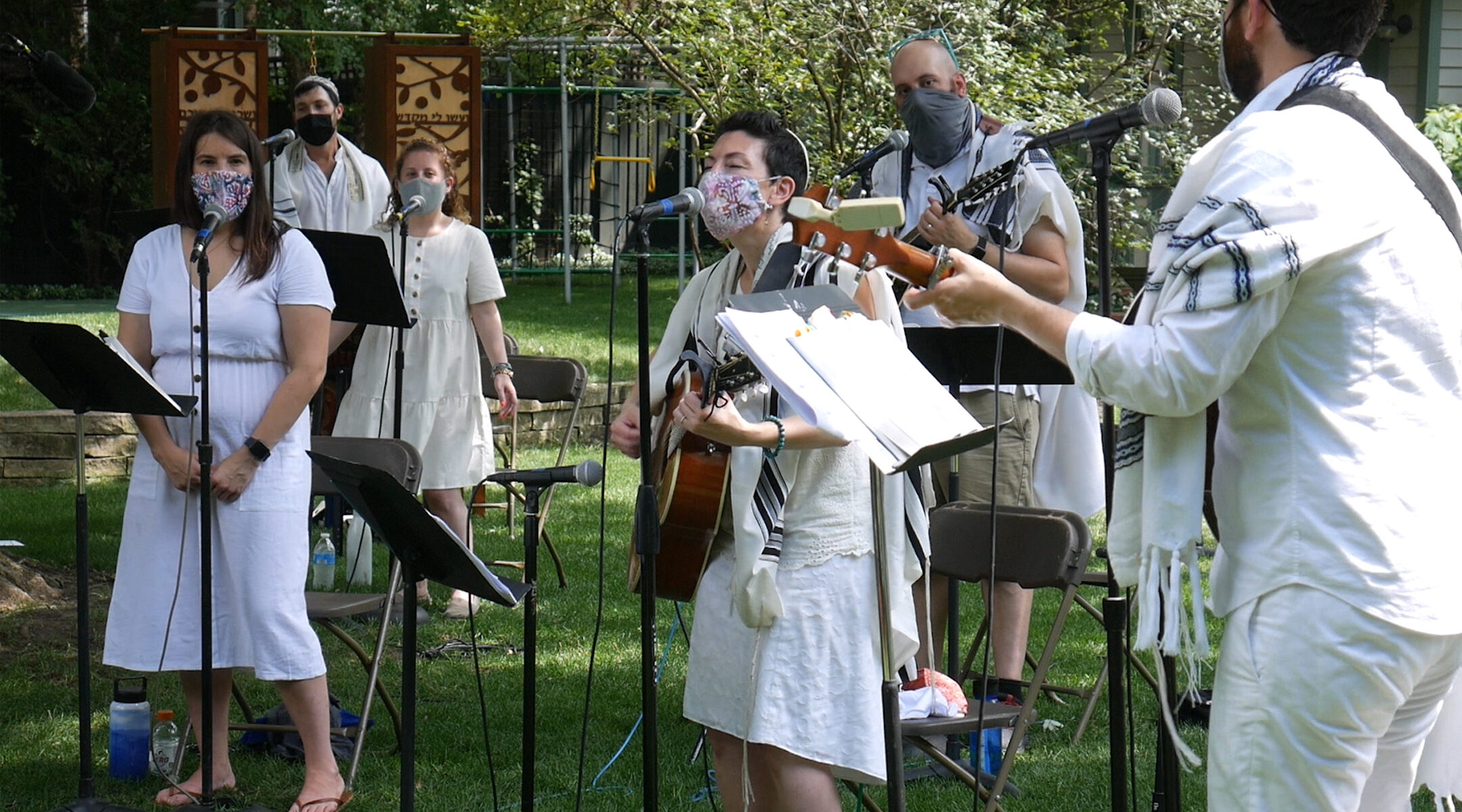 To create a pre-recorded online service, Rabbi Lizzi Heydemann, center, and musicians and singers from Mishkan Chicago recorded the songs and prayers of the High Holidays in August. (Courtesy of See3 Digital Events)
Advertisement

(JTA) — For many Jews, a high point of services on Rosh Hashanah and Yom Kippur is the Unetaneh Tokef prayer, which wonders who will live and who will die in the year ahead.

This year, that question will take on added resonance, as the High Holidays fall six months into a global pandemic that has reshaped lives, battered institutions and killed hundreds of thousands of people, including many in Jewish communities.

At the same time, the prayer will be experienced in dramatically new ways: on the same computer that usually is home to work or school for most American Jews, and in solo or socially distanced prayer services for Orthodox Jews who do not use technology on holidays.

“How do you do Rosh Hashanah on your own?” said Rabbi Vanessa Ochs, a professor of Jewish studies at the University of Virginia. “Our community hasn’t invented that yet.”

When Passover arrived weeks into the pandemic, there was little time to rethink age-old communal traditions for a moment that required isolation. Five months later, congregations have a great deal of experience — albeit unplanned and unwanted — creating meaningful Jewish experiences that are safe amid a global crisis, and they are applying the lessons they’ve learned to the most-attended services of the year.

There will be no packed sanctuaries. Some synagogues that are convening in person  — almost all Orthodox — are taking dramatic steps to keep congregants safe, including limiting attendance and shortening services to allow for multiple shifts.

The long sermons that are often a centerpiece of the holidays are being truncated — to safeguard against distraction for Jews watching from home and to limit virus exposure for those inside synagogues.

With singing considered among the most dangerous activities possible, choirs will not convene, nor will congregants’ voices rise together in song. Instead, in many non-Orthodox synagogues, cantors and others are taping services in advance outdoors or recording themselves individually, then mixing their voices to produce videos to air during their streamed services. In many cases, Orthodox synagogues are separating their service leaders from congregants, sometimes with Plexiglas sheaths, and discouraging congregants from singing.

“There are people who are singing through masks, through Plexiglas, through masks plus face shields plus Plexiglas,” said Joanna Dulkin, a cantor at Congregation Adath Jeshurun in Minnetonka, Minnesota, which is holding services online. “We did make the decision that we would rather not feel like we are leading services through a war zone.”

But Dulkin, who is the vice president of the Conservative movement’s Cantors Assembly, said that even though her congregation has come up with creative ways to deliver an elevated musical experience during the High Holidays, she also feels a sense of loss.

“I’ll miss the sound of everyone singing together because it feeds me as well,” she said.

The shofar will be heard in new ways. Rather than crowding their congregants into the sanctuary to hear the shofar blast, rabbis in many communities are fine-tuning schedules for shofar-blowing in local neighborhoods and public spaces. Many plan to apply a face mask on the open end of the ram’s horn in accordance with expert advice about how to protect against spreading the virus. 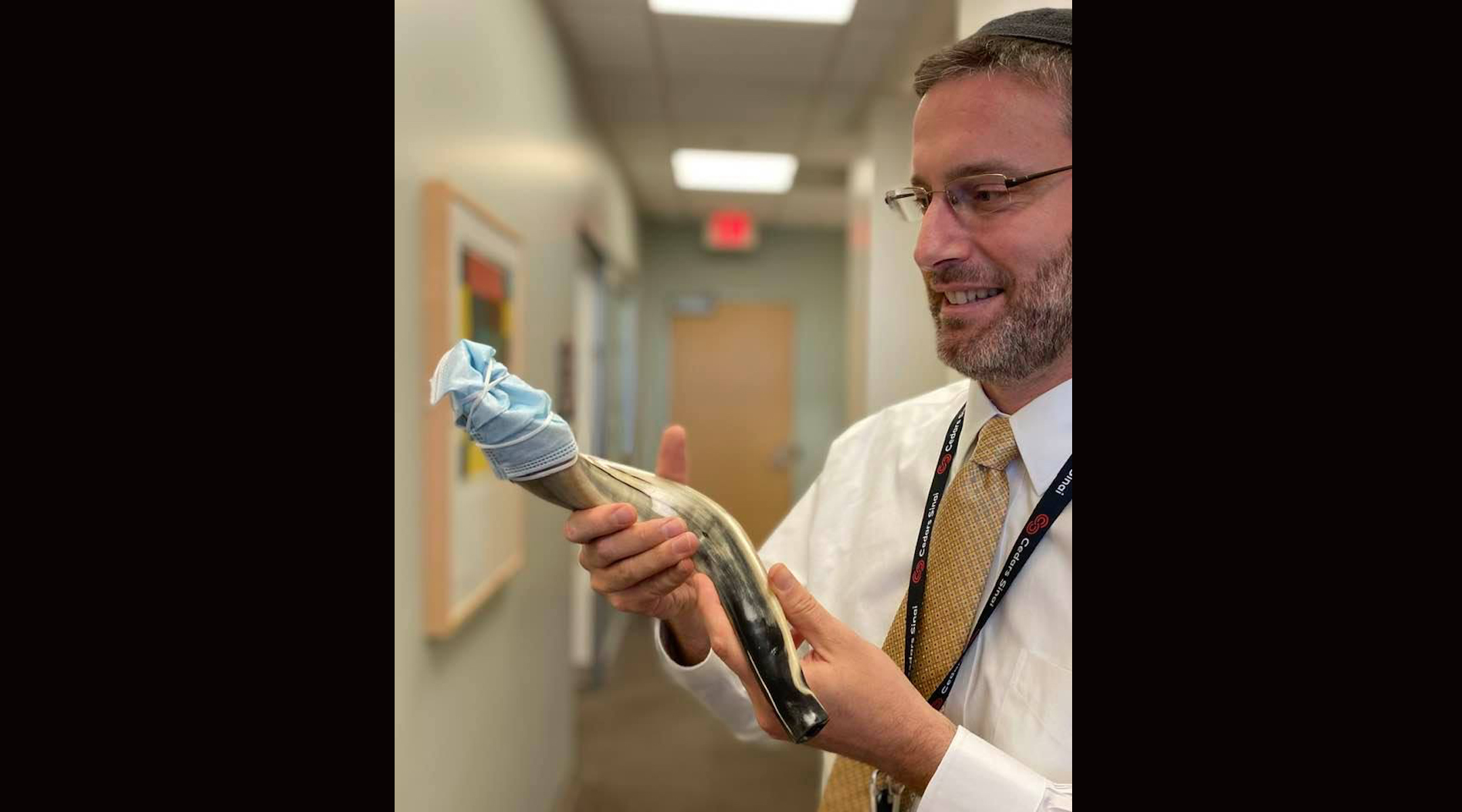 Rabbi Jason Weiner announced in July that he planned to put a mask on his shofar during the High Holiday season, a choice that many others are now making to ensure that they do not spread the coronavirus when blowing the ram’s horn. (Courtesy of Weiner)

“I’ve been practicing and trying it,” said Rabbi Jason Weiner, a chaplain at Cedars-Sinai Hospital in Los Angeles who was among the first to share publicly that he planned to mask his shofar, which he plans to blow multiple times throughout the hospital rather than in the single large service he typically holds for doctors, patients and their families. “It’s hard to hear a difference.”

The sounds of children will be absent, too. With child care settings carrying special risks, family services are not taking place in most synagogues that are open. Some are holding regular services in shifts so parents can take turns staying home with their children.

Some synagogues are trying to help families navigate the holidays at home, including by putting together boxes of supplies to be used instead of or in addition to family services at home.

“What we’ve learned over these months is that to create an online program is not just to take an in-person program and just to put it online, it’s a new field of engagement,” said Rabba Rachel Kohl Finegold of Congregation Shaar Hashomayim in Montreal, who is planning to send an apple cake mix to families in a container that can then serve as a “gratitude jar” all year. “You need something tangible.”

Some see all the changes as yet another way that the pandemic is depriving Jews and others of important traditional experiences, much the way that Passover this year lacked family Seders that typically characterize the holiday.

“This is services, but this is not shul,” said Maharat Ruth Balinsky Friedman of Ohev Sholom, an Orthodox synagogue in Washington, D.C., using the Yiddish word for synagogue. “Shul means everyone is together in the space, davening together, and this is not that.”

Simmering below the surface in the planning of many synagogues are deep fears that the pandemic’s extension through the High Holiday season may harm Jewish institutions for the long haul. Though many have been seeing increased attendance at virtual services, without the annual cash infusion that ticket sales for in-person High Holiday services bring, and with community members under financial pressure and potentially less able to pay dues, congregations across the denominational spectrum aren’t sure how they’ll make ends meet this year.

“They’re expecting that their revenue will be down, in some ways, for the next year,” said Amy Asin, the Union for Reform Judaism’s vice president for strengthening congregations.

But the need to make adjustments has also spurred innovations that many rabbis say are needed.

“Catastrophe is absolutely the mother of creativity in Jewish life,” said Rabbi Adam Zagoria-Moffet, a Phoenix native who has led a London-area synagogue for three years. His synagogue, like all but a handful in England, is not streaming services, but he does plan to offer congregants one live experience on Rosh Hashanah: a shofar blast from the top of the 11th-century St. Albans Cathedral in their city.

And some see the pandemic, and the Zoom High Holidays, accelerating trends that already were present in Jewish life for years.

“I think it’s important for us to realize that what’s happening because of the pandemic is an extension of what was happening over the last couple of decades,” said Rick Recht, a popular song leader and performer in the Reform and Conservative movements.

Recht is working with two other song leaders to provide a package of customizable video services for kids and families that synagogues can pay to provide to congregants. It’s an arrangement that even some participating synagogues recognize could create a dangerous precedent — having congregants come to expect high-quality productions over homegrown services.

For his part, Recht said he believes the two styles can coexist in thriving Jewish communities.

“I feel that we’re heading toward a new paradigm of a hybrid, virtual and physical,” he said.

Whatever long-term changes this unprecedented High Holiday season may portend, and however Rosh Hashanah and Yom Kippur are being experienced this year, the spiritual core of the holiday season is sure to endure, as it has for centuries already.

“Unetaneh Tokef is in,” said Rabbi Binyamin Blau of Cleveland’s Orthodox Green Road Synagogue, referring to the prayer that asks who will live and who will die, which specifically mentions the specter of plague. “We’re not cutting that out.”