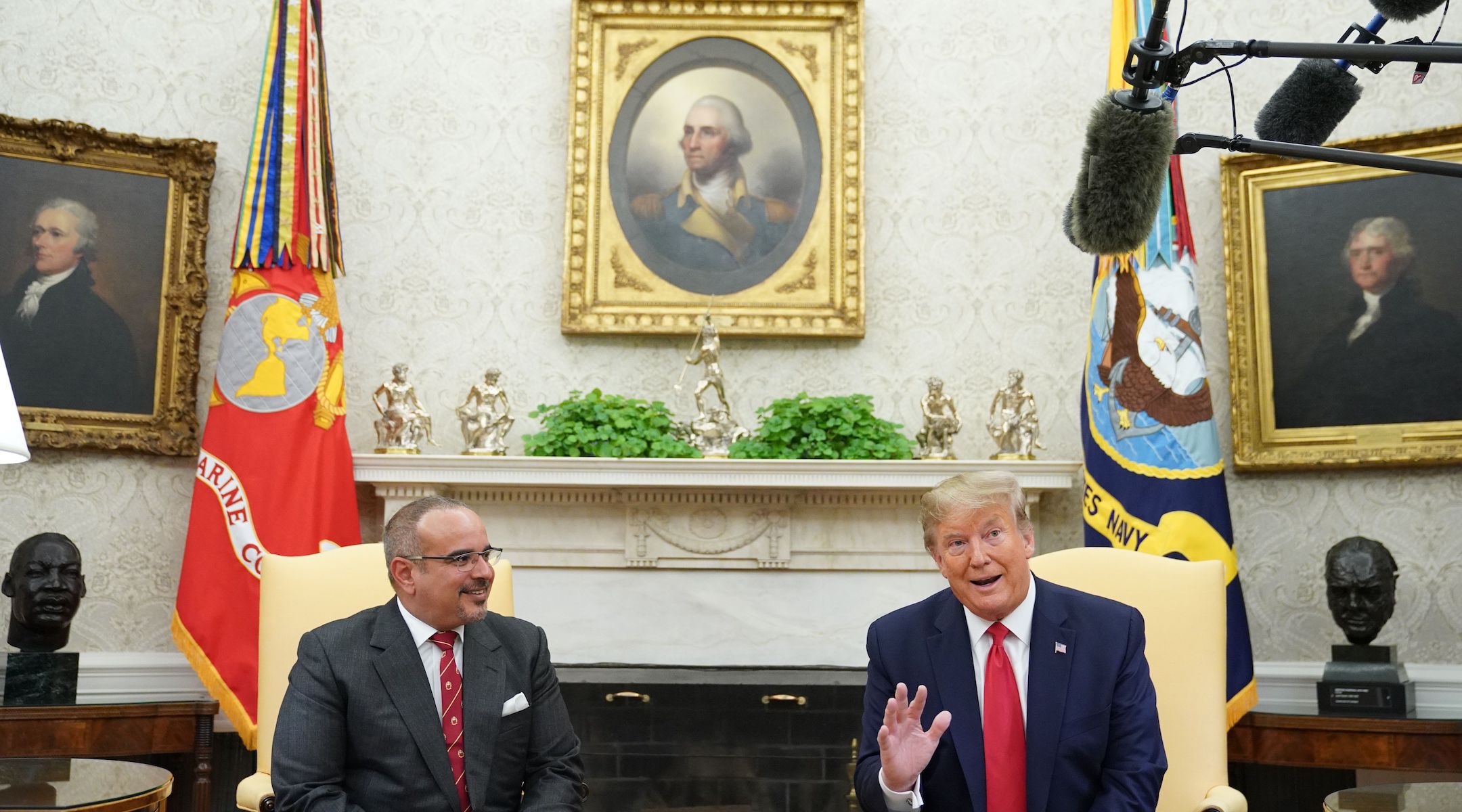 Trump said at the White House that he believed more Arab nations would soon sign on to normalization with Israel, and senior White House adviser Jared Kushner outlined a strategy to the dealmaking: Removing the issue of Palestine as a top priority for Arabs and Muslims, as it has been for decades.

“Another HISTORIC breakthrough today!” Trump exclaimed in his Twitter announcement. “Our two GREAT friends Israel and the Kingdom of Bahrain agree to a Peace Deal – the second Arab country to make peace with Israel in 30 days!”

He attached to another tweet a joint statement of the United States, Bahrain and Israel.

Joint Statement of the United States, the Kingdom of Bahrain, and the State of Israel pic.twitter.com/xMquRkGtpM

Bahrain and to a lesser extent the UAE have had informal relations with Israel for years. Last year, Bahrain hosted a summit unveiling the economic portion of the Trump administration’s Israeli-Palestinian peace proposal — Kushner, Trump’s Jewish son-in-law, was its architect — and allowed Israeli journalists to cover the event.

But official normalization of ties is a significant advance for Israel’s ambition to make peace with its Middle Eastern neighbors, and for the Trump administration’s Middle East policy.

Trump in a White House appearance after the announcement said he expected more states to sign on.

“As more countries normalize relations with Israel, which will happen quite quickly we believe, the region will become more and more stable, secure and prosperous,” Trump said.

Kushner in a briefing with reporters said the overall strategy was one of unlatching Muslim and Arab lands from their attachment to the Palestinian cause, which he believes will help nudge the Palestinians toward a deal.

“I think that this will help reduce tensions in the Muslim world and allow people to separate the Palestinian issue from their own national interests and from their foreign policy, which should be focused on their domestic priorities, and so I think you’re going to continue to see momentum,” he said.

The statement pledged that the parties would continue to seek a “just, comprehensive and enduring resolution to the Israeli-Palestinian conflict.” It also said that Israeli Prime Minister Benjamin Netanyahu and Bahraini King Hamad bin Isa Al Khalifa “express their deep appreciation to President Trump for his dedication to peace in the region.” Trump was nominated last week for a Nobel Peace Prize for the UAE deal.

The Trump administration is discussing with the UAE the possibility of selling the monarchy advanced stealth combat aircraft — something that Israel and Democrats in Congress oppose. Asked on the briefing call whether there were any such incentives for Bahrain, Kushner suggested that none were needed because Bahrain was eager to solidify ties with Israel.

He noted that when Bahrain hosted the event last year to promote investment in the Palestinian areas, the country invited private Israeli businessmen to attend, although Israel officials were absent.

“Bahrain was very forward-leaning and inviting Israelis and people from throughout the region — we had all the leading businesspeople there,” he said.

Kushner said he had a Torah written in the king’s honor in gratitude for hosting the event.

He kept insisting that prior to his initiatives, Bahrain and Israel had few exchanges, although this is not the case.

“There has not been a lot of interaction between Israel and Bahrain and we’ve been able to broker this breakthrough at the leadership level,” he said.

In fact, Bahrain has been hosting Israeli delegations since the Madrid process launched by the George H. W. Bush administration in the early 1990s, and since the mid-2000s has shared informal intelligence and commercial ties, in part because both nations perceive a dire threat from Iran.

Rabbi Levi Shemtov, the executive vice president of the Washington-based American Friends of Lubavitch (Chabad), helped advance relations between the countries in the mid-2000s by bringing together Bahraini and Israeli officials, including ambassadors to Washington, the foreign minister, and the king, at events, privately and then in public. Chabad for the past five years has had a presence in the United Arab Emirates.

Shemtov told the Jewish Telegraphic Agency that the Jewish presence in both countries — Bahrain has a small indigenous Jewish community — helped pave the way for the breakthroughs in the past few weeks.

Bahrain will be the fourth Arab nation to formalize an agreement with Israel. Egypt signed a peace treaty in 1979, and Jordan followed suit in 1994.

A number of pro-Israel groups, as well as Congress members from both parties who are close to the pro-Israel community, put out statements welcoming the announcement.

The American Israel Public Affairs Committee said such announcements would discourage Israel boycotts. One of the main focuses for AIPAC in recent years has been backing legislation that would inhibit such boycotts.

“These diplomatic achievements are a testament to the fact that a strong and secure Israel, backed by the United States, is critical to bringing reconciliation to the region,” the Israel lobby group said. “The old and unproductive paradigm of boycotts and rejectionism is collapsing, and a new model of peace, prosperity and cooperation is emerging.”