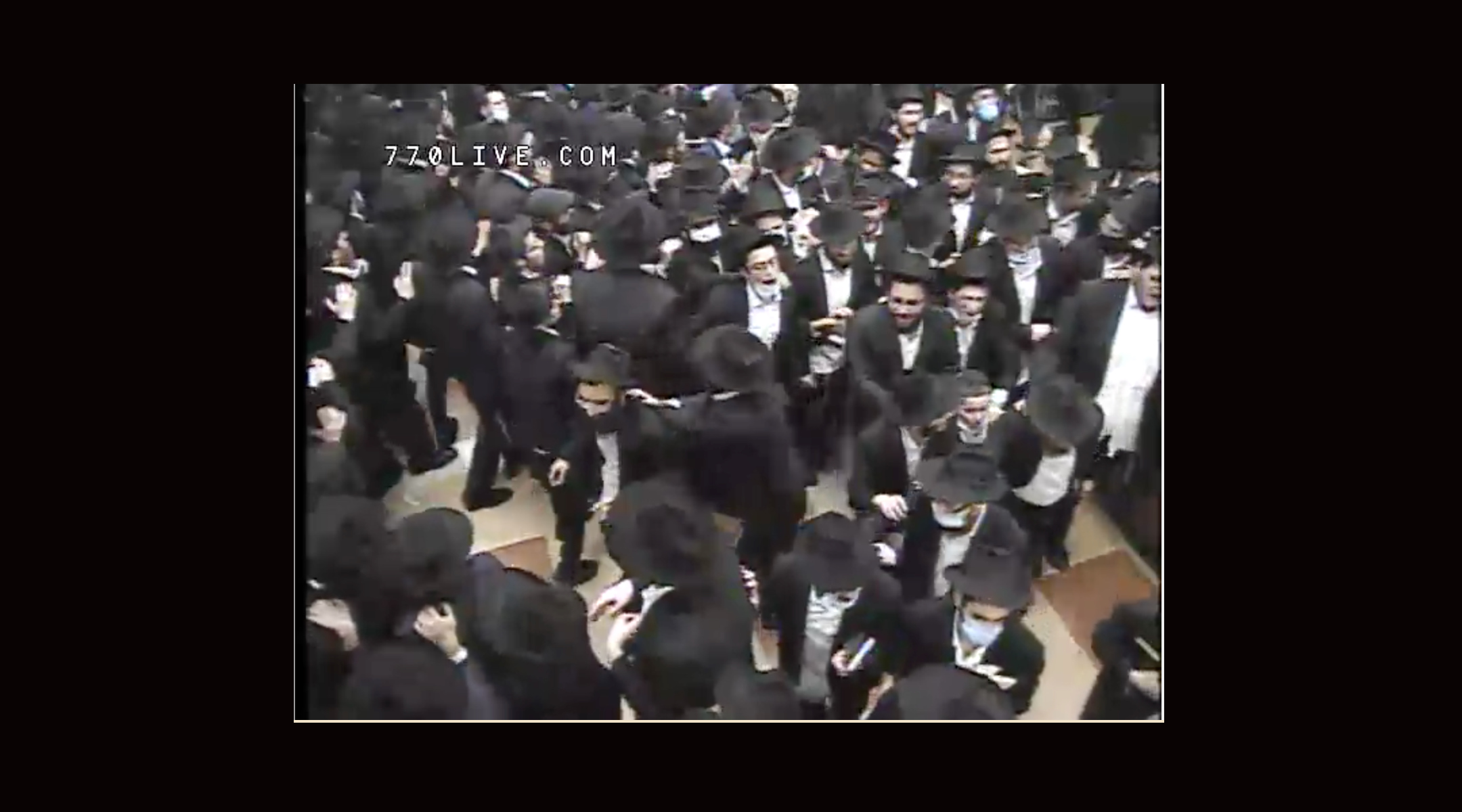 Worshippers danced late into the night at 770 Eastern Parkway in Brooklyn after Selichot services early on Sunday, Sept. 13, 2020. (Screenshot from livestream)
Advertisement

(JTA) — Men packed into a late-night prayer service at Chabad’s main synagogue in Brooklyn Saturday night, in violation of New York’s health rules and against the advice of local doctors.

On Friday, the Gedaliah Society, a collective of doctors that has been advising Orthodox Jews in Crown Heights during the coronavirus pandemic, issued a stern exhortation against attending services at the synagogue, located inside Chabad’s headquarters at 770 Eastern Parkway.

“Given the recent developments of continued positive cases in our community, many of which are associated with 770, and given the inherent crowded indoor mixing nature of 770, we strongly advise that all people avoid davening in 770 for the time being,” the doctors wrote in an update posted to their blog and amplified by multiple news sites serving the Crown Heights Orthodox community. “There is significant risk of contracting the virus in 770 currently.”

Also on Friday, the synagogue’s managers decreed that masks would be required for anyone entering and said that a service on Saturday night would be limited to a small number of participants, according to the Orthodox news service COLlive. Photos showed piles of surgical masks ready to be distributed to visitors.

Yet a livestream from the main synagogue at Chabad’s headquarters showed the cavernous space filled with men packed closely together during the Selichot service, which is traditionally held the Saturday night before Rosh Hashanah. While some wore masks, many did not.

The service did not conform to current New York health regulations, which allow houses of worship to operate at up to one-third of their capacity, provided that six feet of distance can be maintained between people from different households. (A lawsuit this summer argued that houses of worship should not be held to a higher standard than other indoor gathering places; malls are currently allowed to operate at 50% capacity.)

The gathering — which was likely the largest but by no means the only crowded service taking place Saturday night — comes as the number of cases appears to be on the rise in New York’s Orthodox communities, inducing fear about whether schools and synagogues can safely continue to operate. COVID tests in another heavily Orthodox Brooklyn neighborhood, Borough Park, have come back positive at more than four times the citywide rate recently, and large gatherings such as weddings have been eyed as a culprit in the virus’ spread there.

770 Eastern Parkway closed for the first time ever in March as the pandemic settled over New York City. Its reopening in June, which featured dense and largely unmasked crowds, was a sign that many in Brooklyn’s Orthodox communities felt the worst had passed.

Local doctors and community leaders are now trying to shake that sense of security. “Over the past 24 hours we have become aware of multiple new cases of COVID here in Crown Heights, both in residents and those from out of town,” the Gedaliah Society posted early Sunday morning. “This represents for the first time since Purim [in March] a very worrisome surge in new cases.”