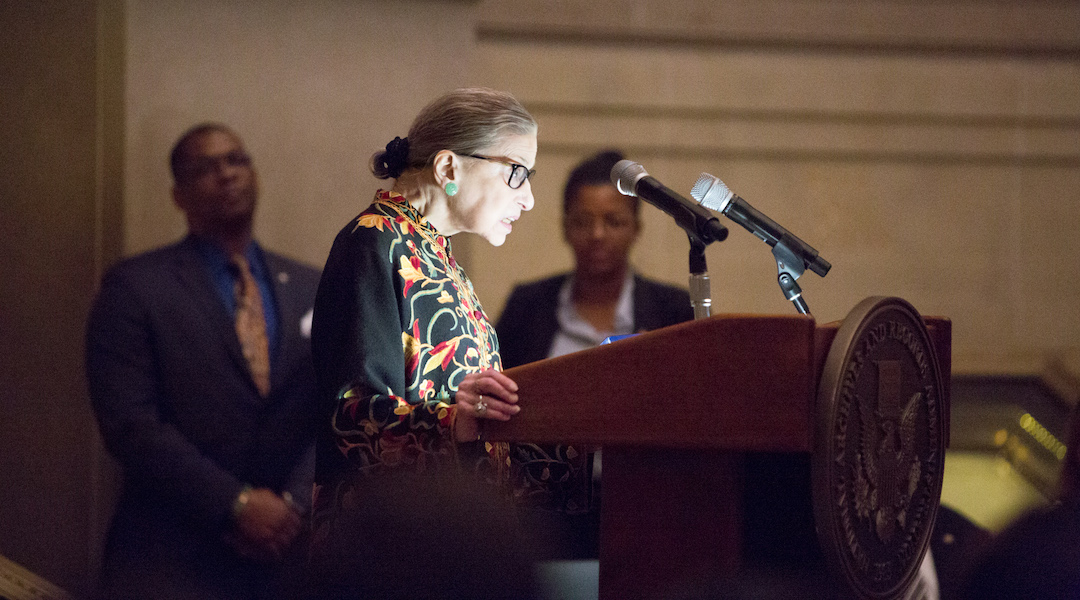 (JTA) — In its obituary of Ruth Bader Ginsburg, The Guardian wrote that the late Jewish Supreme Court justice “abandoned her religion.”

That couldn’t be more wrong.

While Ginsburg, who died Friday at age 87 after 27 years on the high court’s bench, was not known for her ritual observance, she spoke frequently about how Jewish values inspired her, and she was active in Jewish causes and with Jewish organizations.

As Ginsburg would note in speeches, she was the only justice with a mezuzah affixed to her office door. A poster on the wall read “Tzedek, tzedek tirdof,” the Hebrew injunction from the Torah meaning “Justice, justice shall you pursue.” She also once wore that line woven into one of her jabots, or collars worn on her Supreme Court robes.

“I am a judge born, raised, and proud of being a Jew,” she wrote in an essay for the American Jewish Committee in 1996. “The demand for justice runs through the entirety of the Jewish tradition. I hope, in my years on the bench of the Supreme Court of the United States, I will have the strength and courage to remain constant in the service of that demand.”

She would sometimes say, “What is the difference between a bookkeeper in New York’s garment district and a Supreme Court justice? Just one generation.”

Here’s a timeline of the most Jewish moments and motifs in the life of RBG, from her childhood to recent years.

As a teenager, she acted as her camp’s “junior rabbi” and wrote an essay about the importance of remembering the Holocaust.

Ginsburg, born in Brooklyn in 1933 and raised in the Jewish neighborhood of Midwood, grew up in an observant home and attended the East Midwood Jewish Center, a Conservative synagogue. In the summers she would attend Camp Che-Ne-Wah in the Adirondacks, where she was unofficially called her camp’s “junior rabbi” and would lead Shabbat prayers.

Barely a year after the Holocaust ended, a teenage Ginsburg wrote an essay in her synagogue bulletin titled “One People” about the importance of a world free of prejudice. She republished the essay in her 2016 book “My Own Words.”

“We must never forget the horrors which our brethren were subjected to in Bergen-Belsen and other Nazi concentration camps,” she wrote. “There can be a happy world and there will be once again, when men create a strong bond towards one another, a bond unbreakable by a studied prejudice or a passing circumstance.”

She was disillusioned with Jewish observance at age 17 when women weren’t counted in a prayer quorum at her mother’s shiva.

Presaging her pioneering work for women’s rights, Ginsburg would relate that she stopped feeling connected to Jewish ritual at 17 because of the absence of a minyan at her mother’s shiva, as women were not counted. Even though there was “a house full of women,” she said in a 2008 speech at Washington, D.C.’s Sixth & I Synagogue, no prayer was held because 10 men were not present.

In her college dorm, she felt discriminated against when all the Jewish women were placed on the same floor.

In her freshman dormitory at Cornell University (from which Ginsburg graduated in 1954), Ginsburg discovered that she and the other women in her corridor were all Jewish. She told a documentary she felt that they were placed together “so we wouldn’t contaminate” other students. 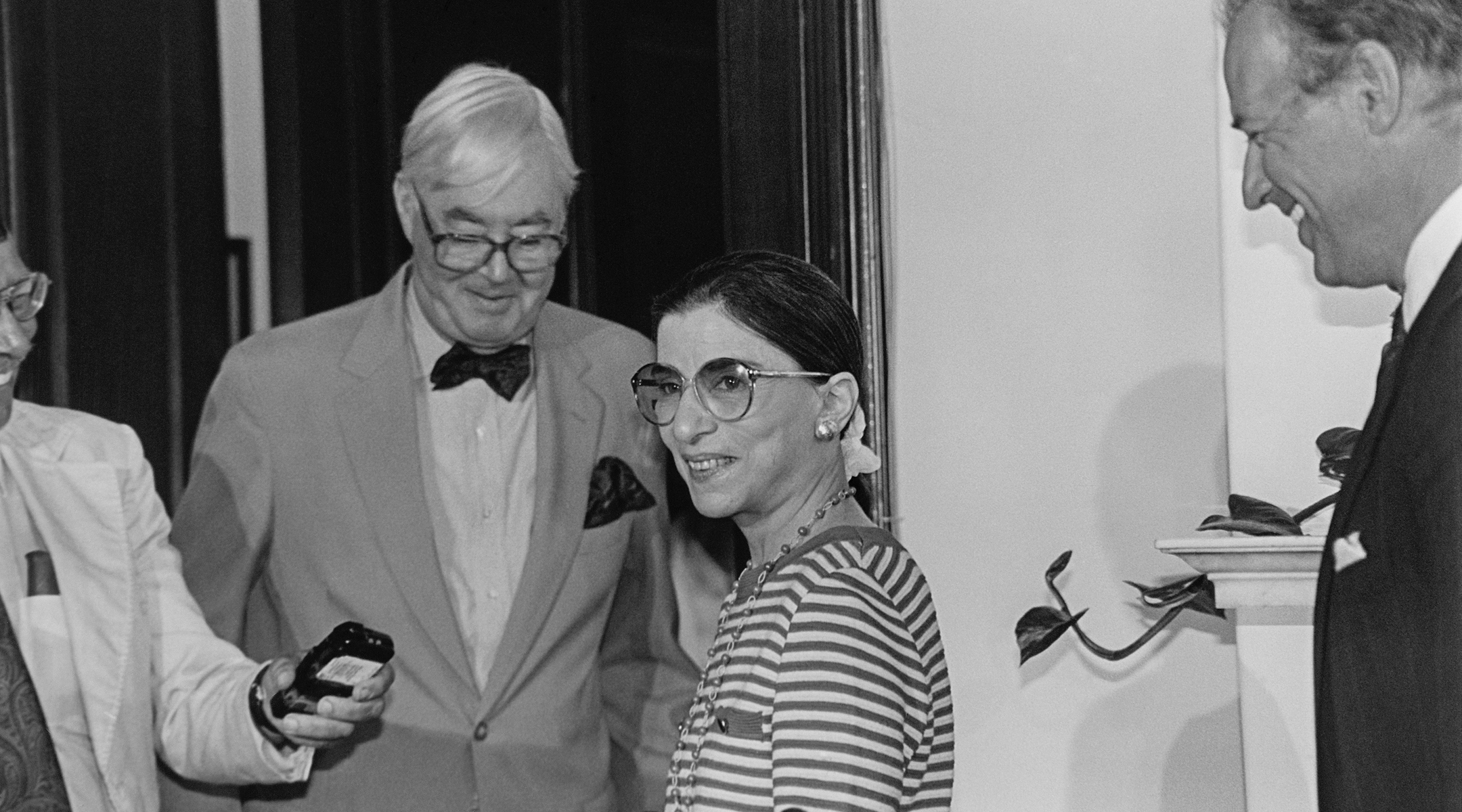 She and her husband sent their kids to Hebrew school.

Speaking to the Jewish Telegraph Agency in 1993, when Ginsburg was nominated (and confirmed) for the Supreme Court, her husband, Martin Ginsburg, described the family as “not wildly observant,” though he said they went to a traditional Passover Seder with relatives. Later in life, in 2015, Ginsburg co-authored a feminist reinterpretation of the Passover story with Rabbi Lauren Holtzblatt.

The Ginsburgs sent their kids to Hebrew school when they lived in the New York area, but Martin Ginsburg told JTA that they didn’t join a synagogue when they moved to Washington, as the kids had grown up.

She visited Israel in the 1970s for a conference on Jewish law — and kept going back.

As an attorney, while arguing a series of landmark women’s rights cases before the Supreme Court in the ’70s, Ginsburg also “actively participated” in the American Jewish Congress’ Commission on Law and Social Action. Also during that decade, she attended a conference in Israel discussing the position of women under secular and halachic laws in Israel and America.

For decades after that trip, Ginsburg continued to travel to the country and comment on its legal system. In 2000, she was honored along with other American and Israeli Jewish feminists at the Knesset. Five years later she was part of a group that advised Israel not to adopt an American-style constitution because it would give the country’s judges less freedom. At an event on that subject, she said, “I admire Israel and I admire Aharon Barak,” Israel’s former chief justice.

More recently, in 2017, she received a lifetime achievement award from the Genesis Prize Foundation in Israel. She was supposed to receive the Genesis Prize itself, known as the “Jewish Nobel,” but declined because she feared that the $1 million cash prize could violate ethics laws.

When a soldier wanted to wear a kippah in the military, Ginsburg stood up for him in court.

In 1984, S. Simcha Goldman, a Jewish soldier, fought in court against a military policy that banned him from wearing a yarmulke on duty. Ginsburg’s appeals court declined to hear his case, but Ginsburg dissented from that decision.

“A military commander has now declared intolerable the yarmulka Dr. Goldman has worn without incident throughout his several years of military service,” she wrote. “At the least, the declaration suggests ‘callous indifference’ to Dr. Goldman’s religious faith.”

She also played a role in the Jonathan Pollard case in which Pollard, an American Jewish defense official, was convicted of spying for Israel. Pollard was sentenced to life in prison, and Ginsberg’s appeals court declined his appeal of that sentence. (Pollard was released in 2015 after 30 years in prison.)

In her confirmation hearings, she spoke about how her Jewish heritage impacted her views on civil rights.

Appearing before the Senate in 1993, Ginsburg said her ancestors “had the foresight to leave the old country when Jewish ancestry and faith meant exposure to pogroms and denigration of one’s human worth.” During questioning, she spoke about how country clubs would bar admission to Jews and said, “One couldn’t help but be sensitive to discrimination, being a Jew in America during World War II.”

In a later speech at Brandeis University, she said that Louis Brandeis, the first Jewish Supreme Court justice (and the school’s namesake), inspired her legal work on behalf of civil rights and civil liberties. 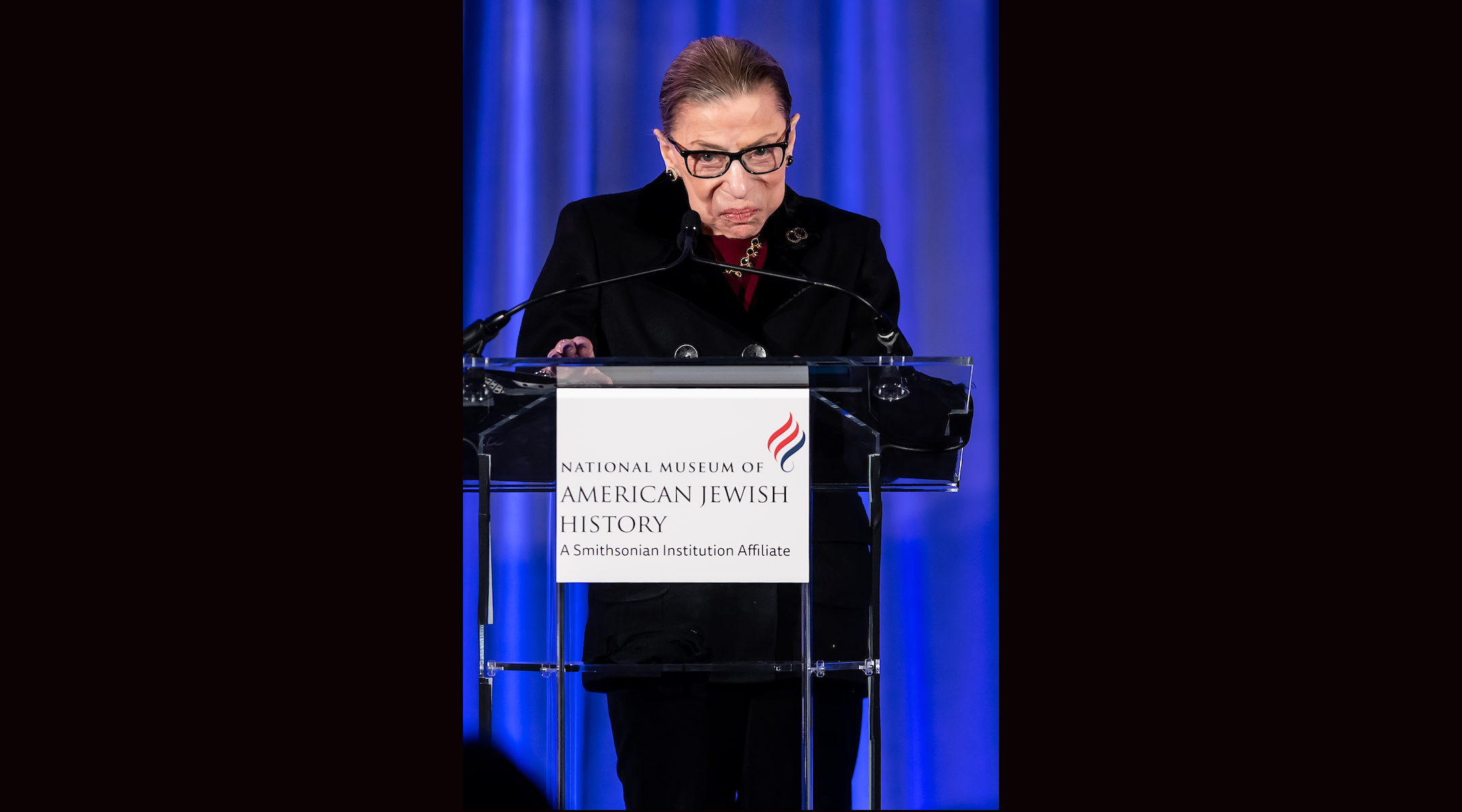 She stayed involved in Holocaust remembrance.

Ginsburg, perhaps making her 13-year-old self proud, was active with the U.S. Holocaust Memorial Museum as a Supreme Court justice. In 1993, months after she joined the court, she presented the museum’s Medal of Remembrance to Emilie Schindler, widow of Oskar Schindler, whose story of rescuing Jews during the Holocaust had recently been told in the film “Schindler’s List.”

In 2004, she gave a speech at the museum on Holocaust Remembrance Day on the role of the law in preventing atrocity.

“In striving to drain dry the waters of prejudice and oppression, we must rely on measures of our own creation — upon the wisdom of our laws and the decency of our institutions, upon our reasoning minds and our feeling hearts,” she said. “And as a constant spark to carry on, upon our vivid memories of the evils we wish to banish from our world. In our long struggle for a more just world, our memories are among our most powerful resources.”

She presided over a mock trial of Shylock from “The Merchant of Venice.”

Alongside a staging of the Shakespeare production, Ginsburg presided over a mock appeal of the guilty verdict given to Shylock, the play’s main character and an infamous anti-Semitic stereotype. The event was held to celebrate the 500th anniversary of Venice’s historical Jewish Ghetto.

Her granddaughter called her “Bubbie.”

In recent years, Ginsburg was known as the “Notorious RBG” and was idolized by legions of liberal Americans — among them many Jews. But her granddaughter, Clara Spera, gave a more personal perspective on the Supreme Court justice in a 2018 essay:

“You may know her as Justice Ruth Bader Ginsburg, or affectionately as the Notorious RBG, but to me she’s Bubbie,” Spera, herself a lawyer, wrote in Glamour. “Bubbie with whom I spend most High Holy Days. Bubbie who took me to see ‘The Book of Mormon,’ where we both laughed until we cried. Bubbie who loves going to the movies. Bubbie at whom I get a kick out of poking fun. Just a Bubbie like any other.”