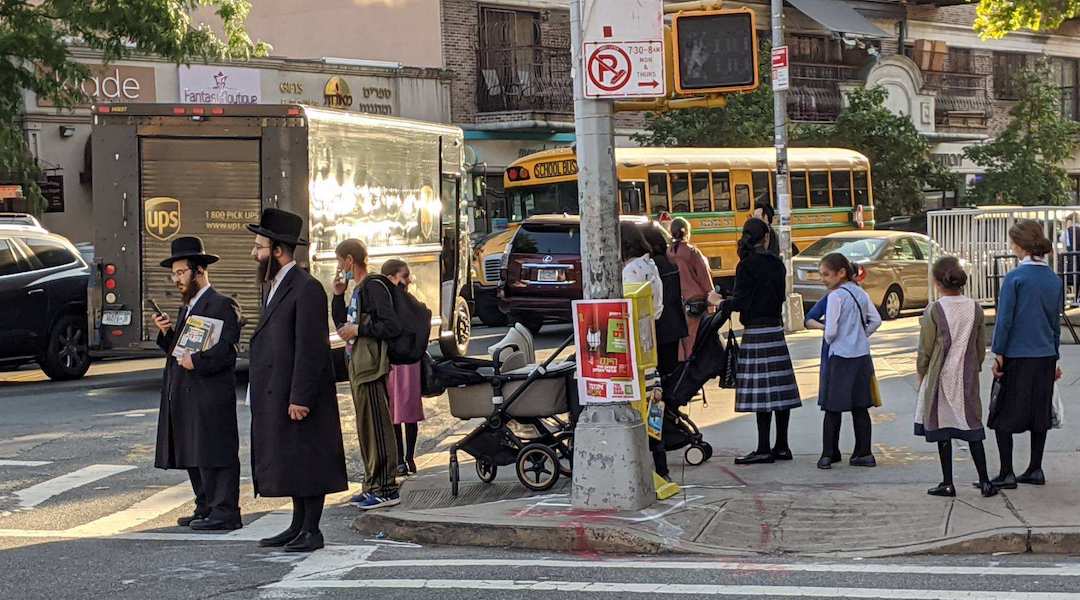 The Department of Health threatened serious action if progress was not made by Monday evening in slowing the spread of infection in new COVID hotspots. (Daniel Moritz-Rabson)
Advertisement

(JTA) – After days of warning about rising COVID-19 cases in Orthodox neighborhoods, New York City is threatening drastic enforcement measures starting as early as Tuesday, the day after Yom Kippur.

The city also plans to begin inspecting private schools in areas with high COVID-19 rates to check that they are conforming to the city’s rules, which include shutting when there are two unrelated cases in the same building.

The enforcement measures could include closing businesses and schools, moves that would inflame already strained relations between the communities and the city.

City officials and community leaders alike have expressed growing alarm about the spread of the coronavirus in Orthodox communities, where six neighborhoods contributed a fifth of the city’s new infections as of Sept. 19. Meanwhile, many people in those neighborhoods do not wear masks in public, which the city requires when outdoors and distancing is not possible, and continue to gather in large numbers.

In an email to reporters Thursday evening, Patrick Gallahue, a spokesperson for the city’s health department, said that if progress in slowing the spread of infection was not made by Monday evening, the city would take serious action, including prohibiting all gatherings of more than 10 people, issuing fines for refusal to wear a mask, ordering private schools and childcare centers that do not meet city standards to close and shutting down all nonessential businesses immediately.

The department also announced “regular inspections of all non-public schools within these clusters and their adjacent zip codes,” according to the email.

“The Sheriff and NYPD continue to monitor mask compliance in these neighborhoods, which have been overwhelmingly low compared to other areas of the city,” Gallahue wrote.

After announcing the uptick in cases Tuesday, Mayor Bill de Blasio said the city would increase communication with community leaders and outreach to residents of the neighborhoods themselves.

Gallahue said there was an increased presence of New York Police Department officers and community affairs liaisons as well as representatives of other city agencies Wednesday and Thursday to distribute information and masks in neighborhoods with increasing COVID cases. The department is also deploying mobile testing units to Midwood, Williamsburg, Borough Park, Kew Gardens and Far Rockaway.

The department will also send robocall announcements, send sound trucks and ambulances out to play messages about testing in English and Yiddish, send direct mail notices and place advertisements in local newspapers.

Because of the disease’s incubation period, any changes implemented immediately may not lower the case count sufficiently by early next week.

One thing that could: reducing testing. Already, there is a push to stop testing in several of the Orthodox communities seeing an uptick, due to the low threshold for positive COVID cases to shut down schools. A message circulated on Whatsapp, a popular messaging service in Orthodox communities, Thursday advising parents not to have their children tested for COVID because it could lead to schools being shut down. A flyer circulated on Whatsapp Thursday, signed by leaders of the Williamsburg Hasidic community, discouraging COVID testing in a message in Yiddish.

Community leaders reached for comment Thursday night were not aware of the announcement before it was made. David Greenfield, a former city councilman who represented parts of Borough Park and the current CEO of the Met Council, a social service agency that works with many Orthodox Jews, lamented the timing of the announcement.

“It’s unfortunate that instead of working with this community that so clearly lacks information the city is resorting to threats on the eve of Yom Kippur,” he said.

Avi Greenstein, head of the Boro Park Jewish Community Council, said the announcement would disincentivize testing and that there had been “no meaningful communication from the authorities, especially the NYC Department of Health. And certainly, there has been no collaboration.”