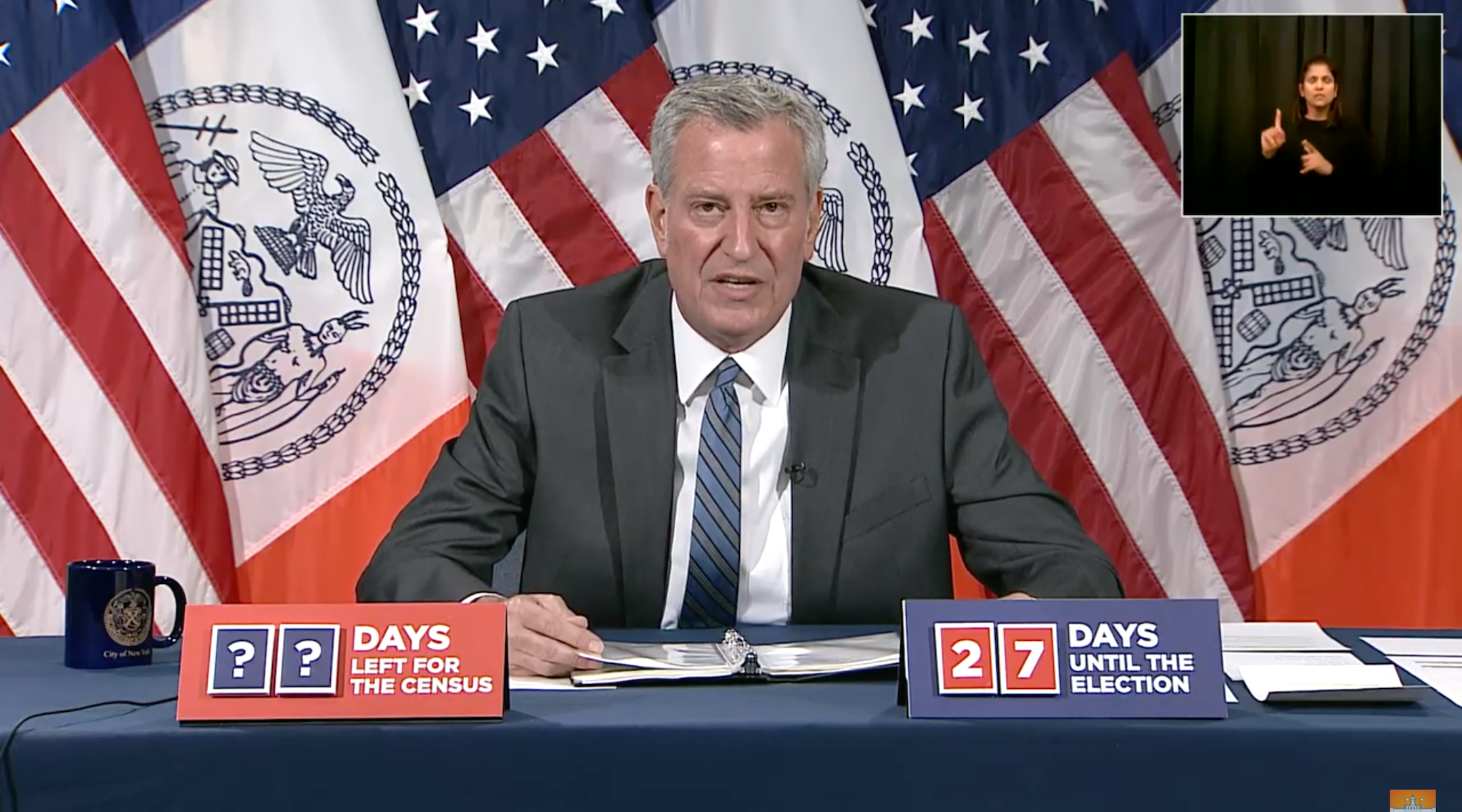 De Blasio has been criticized in the past for singling out New York Jews who violated regulations, and yesterday, Orthodox leaders accused Cuomo of misleading them regarding the scope of the new regulations. Cuomo also faced backlash on Monday for showing a 14-year-old picture of an Orthodox Jewish event while criticizing recent mass religious gatherings.

“This is about all New Yorkers, and when you look at the communities in Brooklyn and Queens, it’s lots of different kinds of people,” de Blasio said when asked about Orthodox Jews. “We’re talking about two of the most diverse places on earth — Brooklyn and Queens. So within these areas are many kinds of people. We want to protect everyone. This is based on data and science.”

On Tuesday night, crowds of young men held a raucous protest in the heavily Orthodox neighborhood of Borough Park, setting masks on fire and blocking a city bus. One member of the community who was taking a video of the protest was beaten to the point that he was taken to the hospital.

The protests were in response to a new set of restrictions that mandate the closure of schools and nonessential businesses, and limit gatherings in synagogues, in areas with many COVID-19 cases. The new restrictions come after a sharp uptick in case rates in Borough Park as well as other heavily Hasidic neighborhoods in the borough.

The positive test rate in Borough Park on Tuesday was 10.6%, more than 10 times the overall rate of the state. Rising infection rates in those neighborhoods, officials fear, could trigger a second wave of the virus in New York City, which had, until these upticks, kept rates low after experiencing a severe outbreak in the spring.

Cuomo blamed the uptick on a lack of enforcement of social distancing regulations by local officials — an implied swipe at de Blasio, with whom Cuomo has a famously acrimonious relationship. New York City and state put out different versions of new restrictions earlier this week in an attempt to curb a second wave of the virus.

After being hit especially hard by the virus earlier this year, Hasidic neighborhoods in Brooklyn reported low COVID-19 case numbers over the summer, leading many in those communities to feel and act as if the virus’ danger had passed.

He added, “And now we see the infection rate go up and now we see more people go into hospitals from these communities.”

Under the regulations set out by the state this week, areas of the city in so-called “red zones” such as Borough Park where case rates are highest, will face strict restrictions. Nonessential businesses will have to close effective Thursday morning, schools will remain closed and houses of worship will be limited to a maximum of 10 people. Neighborhoods in “orange” and “yellow” zones face fewer restrictions.

The neighborhoods of Crown Heights and Williamsburg, which also have large Hasidic populations, are not included in the color-coded zones, but de Blasio said the city is concerned about their rising infection rates.

Orthodox leaders protested the new restrictions, saying that Cuomo told them in a conference call that synagogues would be allowed to operate at greater capacity. They called the restrictions “a duplicitous bait-and-switch.”

De Blasio said the city has 1,200 employees canvassing neighborhoods to notify residents in the zones about the new restrictions, which are set to last at least 14 days, and enforce them. Mass gatherings that congregate in violation of the regulations can lead to fines of $15,000 per day, while fines for not wearing a mask or adhering to social distancing requirements can be as high as $1,000 per day.

De Blasio said that though no arrests were made at the protests Tuesday night, police will not tolerate violence or property damage. He also said that the city will take enforcement of the new regulations seriously.

“We’re going to be enforcing across the board,” he said. “If people refuse to wear masks there will be penalties. Across the board, this is what we’re going to have to do. I understand the frustrations that people are feeling, because no one wants to see us have to go back towards the restrictions that we had in the spring, but unfortunately they are necessary.”