City life can bring people together, but the tensions in Orthodox Brooklyn are pulling us apart 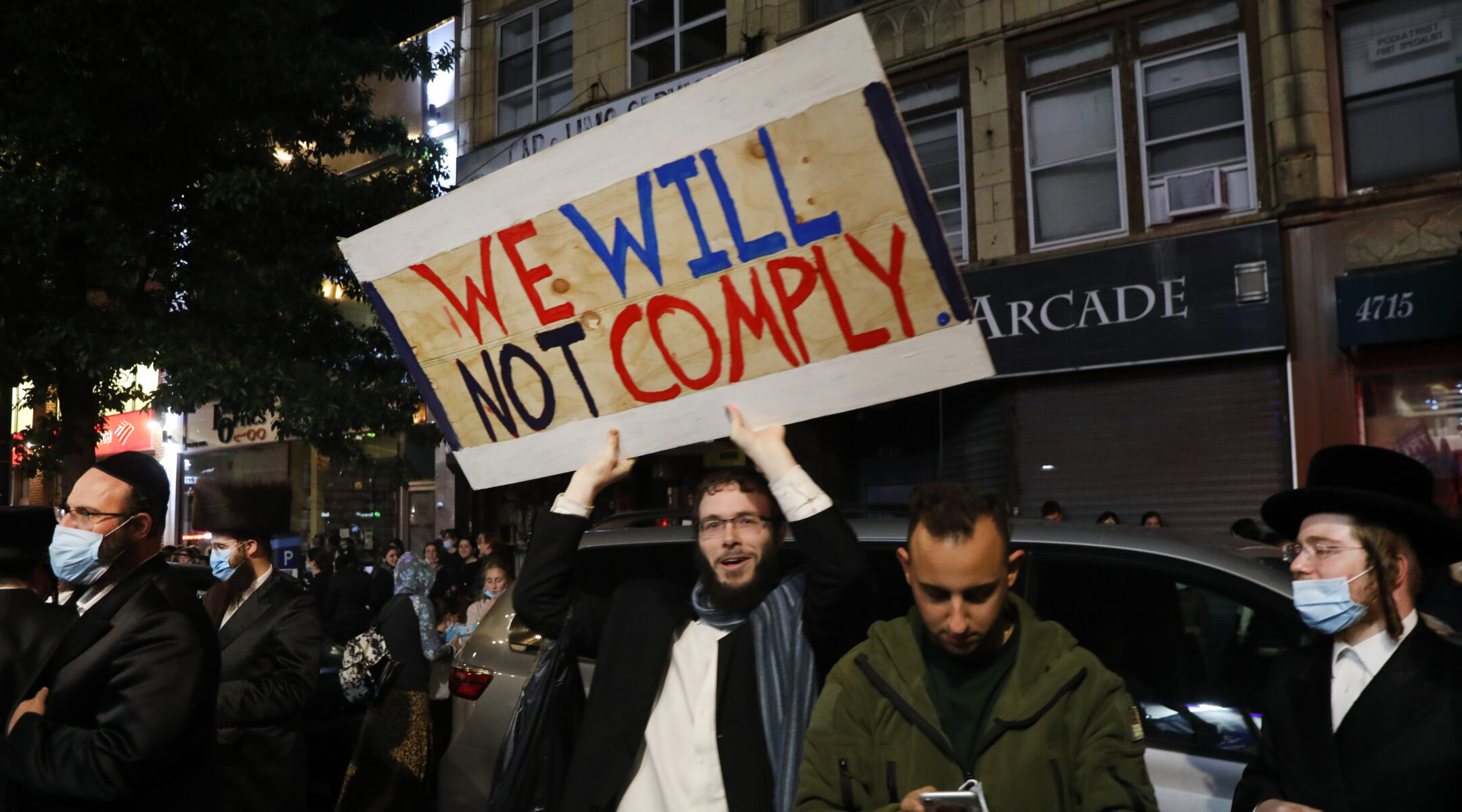 Groups of protesters gather in the Brooklyn neighborhood of Borough Park to denounce lockdowns of their neighborhood due to a spike in COVID-19 cases on October 07, 2020 in New York City. (Spencer Platt/Getty Images)
Advertisement

(JTA) — It’s been seven months since we collectively adopted the term “social distance” to mean a specific geographic space between people. But those words took on a new meaning to me when I looked at my phone on Wednesday morning.

The Borough Park neighborhood of Brooklyn was jolted on Tuesday night when an Orthodox agitator encouraged a street protest against city and state safety regulations that some viewed as applied unfairly to their community. Men burned masks  in the street as groups while proclaiming that the COVID-19 precautions were anti-Semitic in nature — a logical outcome of years and perhaps decades of disinformation about science, government and media within some circles of the Orthodox community.

As I read the news, heard firsthand accounts from friends and watched the video clips circulating the internet, my thoughts coalesced around one idea: This is what it feels like to watch a community you feel connected to rapidly descend into self-destruction. I felt like I was seeing and hearing it from the other end of a tunnel. Like I was both a member of the community and entirely foreign to it. I felt the pain and anguish of someone on the inside, while experiencing the equally strong helplessness of a bystander.

The fact that I live over 1,000 miles away from the center of the action is bound to affect this feeling. But then I remember my own time living in New York and I recall the social distance I felt even then.

When I lived in the Upper West Side or Monsey, happenings in Brooklyn felt unrelated to my life. When my primary residence was in the heart of the Midwood area of Brooklyn (“Flatbush” to the local Orthodox community), drama in Borough Park still felt like it was a world away. And even when I used to spend Wednesday nights eating dinner with my cousins in the heart of Borough Park, I easily created distance in my mind between what I knew was happening outside their apartment and our conversation inside.

It’s something we all do, very often. Indeed, as a scientist who studies urban social patterns, I can use theories, data and findings to pinpoint exactly how and why social disconnects occur even amid geographic proximity. But the generalizability, predictability and even rationality of it all doesn’t seem to matter much when my community is literally burning.

I can attempt to make sense of my experiences, but I can’t seem to do so without tears in my eyes.

Because, unfortunately, the knowledge that most accurately and effectively captures this moment is something that is at the core of the social sciences: the fact that all human groups can be subjected to the same base reactions. That just as no group or individual is incapable of reaching the highest, most exalted states of human existence, we can all descend into total disarray.

Aren’t the young people following an incensed charismatic leader similar to the Hitler Youth or Joseph Kony’s child soldiers? Have they not been indoctrinated to believe they are fighting a culture war? Do they not have the same burning fervor in their eyes?

And their families. While the poverty rate is high, the Orthodox community as a whole has more access to power and capital than the Jewish community has for generations. Yet so many are consistently told that Orthodox Jews are the victims, of an effort to eradicate them or erode their way of life. Does that not make them bear resemblance to those who gathered with tiki torches only a few years ago to proclaim that the Jews would not replace them?

The people who cornered a reporter or who encouraged looting a store that is owned by the relative of another victim of mob violence — are they substantively different than any other group seeking to be heard through violence and terror?

And, of course, gender cannot be ignored either, with men leading this cause and women not only sidelined but actively told they are not to be involved. Does our community not suffer from the effects of toxic masculinity in the same ways as every other male-dominated culture? Do the men in our frum society not act with a sense that they are entitled to make mistakes that would be damning for women? And I fear that soon we will discover that, like so many police officers who engage in violent acts, the strong-armed, male leaders of this cultish group are abusing their powers as well.

Why do we, despite the obvious evidence, continue to believe that we are any different than the millions of other humans across history who have resorted to fear, violence and control when they feel threatened?

Social distancing. As members of the community, we convince ourselves that we are somehow separate from the poison “out there,” just as we are not directly connected to the rot in our midst. Though the hyper speed of media connectivity means that we have instant information about events far away, it also enables neighbors to brush off concerns that the people next door to them are inherently problematic.

“The political or business dealings of the person sitting next to you in synagogue is none of your business,” we tell ourselves. If he tries to sing the wrong niggun, wordless song, we get involved. But his real estate dealings, his donations to political groups, that’s not our job to patrol.

And perhaps we distance ourselves because we know what happens if we don’t. We’re aware that if we begin to observe and highlight problematic behaviors, a forced social distancing is triggered. Attempts to explain the concerns and be heard — even when they come from people on the inside — are dismissed. Advocates are told that, just by the nature of their disillusionment, they are no longer a member of the community. It is internally assumed that only those who are entirely embedded in the experience can have a stake in its future.

And so, we must choose between a self-isolation or a forced one. Do we pretend that the events, practices and deeply troubled people are not our own? Or do we get involved and face the mob that tells us that it is impossible for us to share their identity?

Judging by the countless texts messages, and phone calls I’ve had in the last four years, and specifically in the last six months, many frum Jews face this dilemma on a near-daily basis. And as we do, we attempt to remain at least somewhat hidden. We share information within private networks. We cover our faces or our names when we take public stances. We remain in the shadows, while the most extreme groups become the mainstream and hold all of the institutional cards. It’s difficult for me to see this in my own community, but my training has taught me that we have seen how this goes. And it doesn’t end well, not for our cities or our communities.